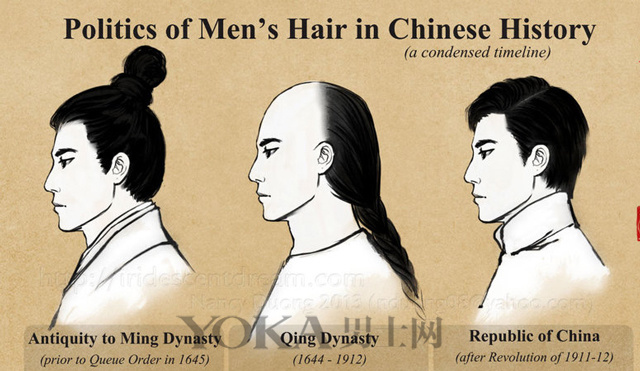 Chinese Hairstyles Through the Dynasties

While this video is not a 100% accurate historical documentation, it gives an idea of how important hairstyle is in Chinese history.

Hair carries significant meaning in Chinese culture, it reflects your identity, status, your religions, and your political stands. With changing of ruling parties, the hairstyle changes as well. For example, when Qing dynasty(1644-1912) took over Ming dynasty(1368-1644), The emperor of Qing enforced the policy of cutting hair.

Also, cutting hair could be an offense in Chinese Culture, as people believed that your body are all the gifts from your parents, damaging your body equals to insulting your parents, which is unfilial. Cutting of hair can be seen as a punishment or humiliation.

As we can see hair and hairstyle have great meaning in Chinese history. Although in modern times, hairstyle is, in most cases, a personal preference, and cutting hair is not a sin or an offence anymore(maybe in some religions), we definitely have more freedom in deciding how long we want our hair to be and how often we want to style it. However, the idea of hair accessories can still bring up some Chinese traditions and stories. Incorporating hair accessories into my jewelry design can be a good direction to look at. Combining what I have mentioned in previous post regarding Chinese wedding customs, hair accessories can also play up and down, for different occasions, for different hairstyles.

*The hierarchies of Emperors wives in Chinese History, Qing Dynasty

There are strict rules regarding the  hierarchies of Emperor’s wife in Qing Dynasty. From the highest ranking to the lowest ranking, and the maximum number of persons allowed for each title are listed below: (Translation may vary)

Generally, Emperor will respect Queen Consort and do not appoint Imperial Noble Consort as this may make the Queen Consort feel intimidated or threatened, which is why Queen Consort Ulanara was so raged at Emperor Qianlong’s decision.

Also known as Limbo. A representation of the place in the Forbidden City where Emperors put his abandoned, abolished or unwanted wives to spend rest of their life.  Usually it means the Emperor has lost interests in them or wants to punish them for their wrong doings.

The Cold Palace is not a specific palace in the Forbidden city, it symbolizes a situation where emperor does not want to pay attention to the wife anymore, and do not entitle the wife to have the welfare that she used to have. This includes less maids servicing her. Once the wife is put into the Cold Palace, it is equals to taking away all her titles in the hierarchy although it may not be officially announced. It is very commonly seen in Chinese drama and novels.

One thought on “Chinese Hairtyles and Its Significance”