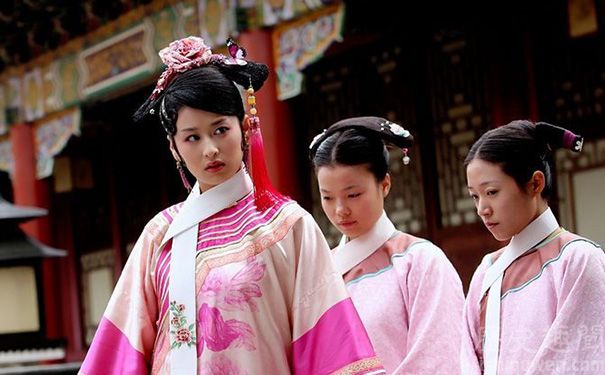 the images in the story is mainly to make the article less boring. They are all from Chinese drama Empresses of the Palace, happened in Qing Dynasty. The costumes and accessories is applicable for my story’s background.

When it comes to Imperial household there is always rivalries and fights for power. I do not know what exactly happened to all of the ladies but along the years there are people died, there are people missing, and of course, there are new born babies’ sudden death as well. I never think it is a bless to be born in such family, but I have no choice.

When the new Noble Ladies join the family, they probably will learn to survive in a hard way. Father is always busy with her states affairs and he seldom visits his ladies. The competition of who giving birth to a son faster and whose son is smarter is never ending. I know my brothers are competing with each other for father’s attention as well, but i am so not into all these drama. I just want to do the things I like, drawing, reading, and I don’t really care about the throne. Maybe that is why my brothers are not hostile to me, they treat me more like real siblings than competitors.

It seems that Noble Lady Zhao has privileges and she was the first who get summoned by my father among the new concubines. The next day I saw a lot of servants going to her palace with rewards granted by my father, as well as the gifts from other ladies. She is probably the one will get promoted soon. If I were my father, I would summon Lee instead, she is so much prettier than Zhao. But who knows, things can happen and nothing is for sure. A few days later, Noble Lady Zhao is promoted to Dame Zhao, one level up.

A few months later, I saw something  happened when I walk pass the Imperial Garden. It seems that Dame Zhao is punishing some servant for dirtying her dress. Spoilt girl, she is so pretentious nowadays, even though she is only a Dame. She ordered the servant to slap herself  nonstop, until her face is totally red and swollen. I know I should not interfere all these so I quickly leave the scene. The next day I heard that Dame Zhao was confronted by Empress Consort Wu, who is the in charge of all affairs in Imperial household, including the concubines. I guess Dame Zhao is messing up with the wrong person, the servant she punished was under Empress Consort Wu. What happened to her I am not sure, I only know that from that day on wards my father has never summoned her ever again, and grandma does not give her more attention, probably giving up on her as she has no basic knowledge in dealing with the Palace.

Meanwhile, Lee has been pretty quiet. I have not seen her for months since the selection day. Until my father’s birthday celebration, she appeared again. She dressed in dancing attire and dances so gracefully. Father was very attracted by her. Soon after that day, she was promoted to Dame Lee. I have not personally talked to her nor do I know her characters, but she has always been quiet instead of outspoken. Maybe that is why she has not gathered much jealousy although her beauty makes her outstanding.

A few years have passed and I am 17 now. Dame Lee has become Consort Lee. Moreover, she is expecting a baby. Everyone knows that once she gives birth to a boy, she will sson become a Noble Consort, which places her only lower to Empress Consort, as father has no Imperial Noble Consort. She looks more matured now, the last time i see her, she has less flowers on her head. Instead, she has more golden accessories, everything is bigger and heavier. She is not the little girl anymore, she carries the status and power. Nonetheless, she is still wearing the Zan she brought from home.

However, the peace proved short-lived. Shortly after the birth of the new prince, he died an unnatural death. I have seen this a few times, but I feel heartbreaking seeing Lee crying over her son everyday. I did not know what is the cause of the death, or who murdered the kid. He is just a victim of the power rivalries. My father has many sons, and has lost many as well. I can’t say he is not sad over the death, but he probably is used to all the ‘accidents’ here. As for Lee, that is her first child, she was almost mad. Slowly father has lost his interests in Lee as she is unable to recover from the incident. Lee was never promoted to Noble Consort by my father. That is the sadness of being an Emperor’s concubine. You might get all the attention quickly, but you might lose it very fast as well. Emperor is never short of pretty girls who made themselves available to him, if one can’t catch up the pace, she will be left behind and forgotten.

Some other concubines have given birth to princes and princess, and are promotes to higher status. Lee was forgotten by my father. She looks like a woman who has lost faith in her husband and life. The good thing is, she is attracting less attention from other concubines and people do not see her as a competition anymore. She has a more peaceful life now. Father never put her into the Cold Palace, she still has her freedom in the Palace.

3 years later, my father, the Emperor, passed away at the age of 45. Stress has worsen his health, and finally he could not fight with it anymore. I love my father very very much, and I believe many of my sibling brothers do as well. I know some of them have been hoping for the day to come so they can become the next emperor. But I never wish something like this to happen. I only want my father to stay with me. Father has his testament indicating who to become the new emperor—-and it is me!

I won’t say that I have no idea about this, because in the past three years, a lot of things were going on, between me and Lee, between my brothers, between the concubines…I know I will be the new emperor, although myself has no crave for the power. I did it because I love my brothers, and because of Lee.

Here is what happened for the past 3 years..