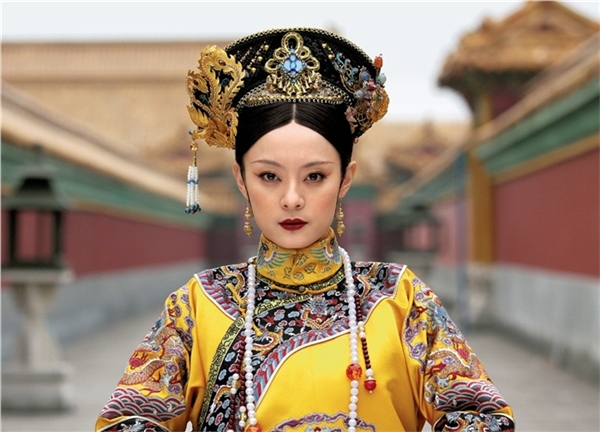 After three years of mourning, Lee is 23 years old already. I decided to bring her back to the Imperial family-not as my father’s widow, but as MY consort. I know there will be a lot of discussions and objections, but I don’t really care about them. I am the Emperor and as long as I handle the states matter right, no one can question my reign.

I am bringing her back…She used to be my father’s Noble Consort, I want to give her something more than that, to show her that she will be having a better life with me. As I already have a wife, and she has become the Empress Consort, the highest position available now is Imperial Noble Consort. That would be the title for Lee. Finally she is my woman.

On the day of ceremony,  she dresses up in the ceremonial attire. She reminds me of my mother who passed away decade ago. My mother used to be an Imperial Noble Consort of my father. She is wearing a Dianzi钿子, with phoenix pattern on one side, and flower patter on the opposite. Pearls, gems, jade..anything nice and luxurious I would give her to show everyone her status, and my love for her. The tassels move as she walks, making her even more demure and elegant. She can’t wear scarlet dress as she is not the Empress Consort. Her dress is bright yellow, the brightest yellow can be as she is the highest among all concubines.

I hope my Empress Consort and Imperial Noble Consort can get along well.

The following year, Lee is expecting our first child. I was over the moon!I almost wanted to immediately assign the kid as the successor, but I know I shouldn’t. This time, Lee gave birth to the child smoothly and the kid is kept safe after birth. I will not let Lee lose a son ever again.

In the Imperial household, having a son is like having a amulet, Lee’s status is unparalleled as my Empress Consort did not have any kid with me. Meanwhile, Lee has wide connection with the noble man in the court, as we planned before. We have been suppressing all the royal clans and promoting capable peoples who do not have strong family background.Meritocracy is more emphasized.

I have to admit that I can’t handle all the state affairs without Lee, although I am not supposed to let my concubine to learn about any court issues. She is more vigilant, decisive, and farsighted than me. She can always think of a comprehensive solution faster and better than me.

Lee has a best friend Ou, who was my father’s Xiunv but never get selected as a concubine. I allow her to visit Lee as she wishes, and sometimes stay over at Lee’s palace. Lee also has a servant from her family that has been with her since she first came to Palace. It is good that Lee has some real friends in this lonely and complicated place.

Another year passed, our son is one year old now. One day, Lee approached me and asked for a favor–she wants me to appoint marriage for her servant. I permitted her request and appoint her servant to a high rank Official’s son. Soon after which, her servant is sent out of the Palace to her new home. On the day of departure, Lee gave her a gold bracelet and some money personally.  After that day, I have never seen her again. I never ask Lee why she wants to send the servant away, maybe she feels that the servant has done her duty and deserves a better life afterwards, or maybe asked Lee to do her the favor—I am not sure, as long as Lee is happy about it.

(what happened is that Lee realized her servant always dolls up whenever she knows that she is going to meet the Emperor. Slowly Lee found out that her servant secretly wants so attract Emperor’s attention and is fantasizing about becoming a concubine herself. Lee can not tolerate the servant’s betrayal so she request to send her out of the Palace. Marriage is just an excuse to kill the servant’s hope. Lee still shows mercy to the servant as she as accompany her so decade, and thus find her a good family)

Lee assists Empress Consort on daily affairs in the Imperial household. Although I continue to have new concubines from the triennial pageant, I never neglect Lee because of the new girls. As an emperor I have to take more concubines so to give birth to more children, and thus will have more choice in selecting my successor. It is a bless and a curse. I hope the rivalries between my children and my concubines next time wont be so cruel.