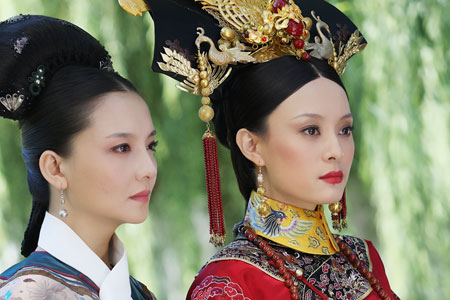 Another 5 years has passed. Our son is almost 7 years old now. He is as smart as his mother, and as beautiful as her mother. My Empress Consort and Imperial Noble Consort have not creating troubles for me and have kept family affairs very organized. Probably because Lee is more decisive and My Empress Consort Wong is more obedient and soft-tempered. Lee has helped Empress Consort a lot, if not for her, the Empress Consort might get a lot of disrespect due to her quiet nature.

I have health problem since young, sometimes I am too weak to read all the memorials from officials, and Lee will help me read, even write the comments according to my will. Over time, I would allow her to comment on her own will, and inform me afterwards the issue. She has guided me about states affairs even before I became the emperor anyway.

Everything goes well until one day, a devastating news came to me—my Empress Dowager had a sudden death. There was no signs, i was till talking to her last week. The Imperial doctor says she died of disease. Although there was not much love between me and her, she has always been a good wife and a good Empress Consort. She made no mistakes and has always been supportive of me. What I can do for her now is giving her a decent funeral, and take care of her family.

The death of Empress Consort Wong leaves the position empty, and as everyone expects, Lee is soon promoted to the new Empress Consort. She has what it takes to be in that position, furthermore, she has given birth to my only son. No one can doubt her status.

As former Empress Consort just passed away, the ceremony for the new Empress Consort Lee’s titling is kept simple. Nevertheless Lee still has her phoenix crown as custom. The gold phoenix is so huge compared to her slim figure, as if it is pressing  her down. Lee has reached 31 years old. She walks slowly but steadily in her heavy costume. her Bianfang is embed with coral. She looks powerful—and she IS. Sometimes I feel she is more powerful than me, she is the one connecting with the officials and suppressing the royal clans. She is the one telling me the policies I should implement for the best of my country. Sometimes I feel she is the real Emperor, I am only her assistant. Maybe all these years I never change, I am still the young prince who cares no more than my paintings and music, and my loved ones.

Can’t deny that the idea came to my mind after the death of Wong, but I chose not to believe. Even if it was Lee who poisoned Wong, I can’t afford to punish her now as I need her to assist me in states affairs, and the country can’t afford to lose two Empress Consort in few months.

However…Since the servant has come to report, I have to do something about it. I can’t declare war with Lee, and I don’t want to. AI still love her although she is not the Noble Lady Lee I knew anymore. I need to keep the peace between us.

After some thoughts I decide to take investigation of the incident, which is just a disguise in my plan. I then blame everything on Ou, who ‘wants to help her best friend on her own will, while Lee has no idea about her plot’. I gave her death punishment. I know Lee would be heartbroken–but she won’t object my decision as she knows it is the only way to keep her safe. Ou, on the other hand, is truly a good friend of Lee and has taken all the responsibilities on herself. So I decide to take care of her family after her death. Before her last day, she takes down her necklace and gives it to Lee, as a memento for her.

Instead of saying the country is under my reign, I’d rather say it is Lee’s reign. She has organized everything so orderly and nicely. The royal clans have submitted countless memorials to point arrows at her, but without her, I can’t lead the country well. Maybe after my death, she will guide the young emperor as well, or even take full control…Still I can’t order her death because I need her to fight with the royal clans and some other Officials who are trying to control the young emperor. The power need to be balanced…Until one day the new emperor is capable enough to handle all the issues on his own.

But for now, she has the power, and my love, to keep her status safe and sound.