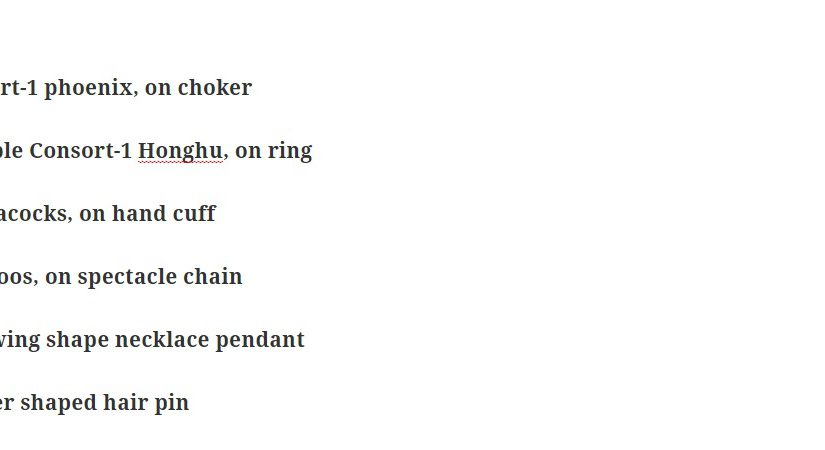 Phoenix(凤凰feng huang) are a mythological birds in Chinese history  that reign over other birds.

Originally, Feng Huang are two different birds of same breed. Feng is the male and Huang is the female. Later, during Yuan Dynasty, the two words are combined to one Fenghuang as the king of birds. As the image of dragon is slowly accepted to describe male emperor,phoenix is then used to portray females empresses.

With feather mainly in scarlet, it is a phoenix凤,

mainly in Blue, it is a Luan鸾

mainly in yellow, it is a Yuan Chu鵷雏

mainly in purple, it is a Yue Zhuo鸑鷟

mainly in white, it is a Hong Hu 鸿鹄 ”

In fact they are all categorized under phoenix, but only the scarlet phoenix is of the highest status and purest of them all.

There is other version of explanation regarding the types of phoenix. From <Classic of mountain and Sea>:There are three multicolored birds, one is Huang皇, one is Luan鸾, one is Feng凤 .《山海经》曰：有五采鸟三名，一曰皇鸟，一曰鸾鸟，一曰凤鸟。

Some versions say that Luan鸾 is actually the same breed with 凤 feng and 凰 huang, just it is not an adult bird. As Luan grows up, it will become Feng or Huang. Nevertheless, all these are fairy tales and there isn’t a scientific way to verify as they are made up of people’s imagination.

Here come back to my jewelries. I need to decide which bird to depict on each jewelry:

There is no doubt that phoenix will be depicting Queen Consort皇后.

As for Imperial Noble Consort皇贵妃, since it is also a single bird, there must be a different meaning of the bird, which is why I research on the breed of phoenix.  The position of Imperial Noble Consort is very close to Queen Consort, as such choosing a breed of phoenix that is inferior than pure phoenix would be ideal. However, if the phoenix only varies by colors, it is pretty difficult to reflect in the jewelry as the material would most likely be in the same color(unless adding crystals). I realize among the 5 breeds of phoenix, the white-color breed, 鸿鹄 hong hu, has both mythological meaning and daily-life meaning. the rest 3 breeds: 鸾luan， 鵷雏yuan chu ， 鸑鷟yue zhuo are seldom heard nowadays and probably most Chinese cannot even read the words. 鸿鹄 Hong Hu can be explained as the type of bird that fly very high and very far, such as eagle, Dayan, swan, crane. It is in modern context used to describe people  with great ambitions. There is one idiom as 燕雀安知鸿鹄之志(How can swallows and sparrows understand the ambition of a Hong Hu), means “How can a common fellow read the mind of a great man?” As such, it is very suitable to use the bird hong hu on Imperial Noble Consort because she has the great ambition to defeat substitute the current Queen Consort.

4 birds are used for the cuff as Consort妃. As it comes down to consort, the bird is less prestigious. The first bird came into my mind is peacock. Why? Because usually the 4 consorts are always openly or secretly competing with each other, on who is the prettiest, who wears the most luxuries, or who are more favored by the emperor. It is just like peacocks showing of their feather and attracting the opposite sex. Although the fanned peacocks are males in nature, this metaphor is still applicable to the consorts and their jealousy.

6 birds are used for spectacle chain for Dame嫔. Cuckoos could be the choice. Cuckoo bird is famous for their zygodactyl feet and laying eggs in other birds’ nest or other members’s nest from the same breed. The cuckoo egg hatches earlier than the host’s, and the cuckoo chick grows faster; in most cases the chick evicts the eggs or young of the host species. The chick has no time to learn this behavior, so it must be an instinct passed on genetically. This instinct for competition and eliminating enemy reminds me of the rivals of concubines and their kids.

Fun fact:Cuckoos have various strategies for getting their egg into a host nest. Different species use different strategies based on host defensive strategies. Female cuckoos have secretive and fast laying behaviors, but in some cases, males have been shown to lure host adults away from their nests so that the female can lay her egg in the nest.[23] Some host species may directly try to prevent cuckoos laying eggs in their nest in the first place – birds whose nests are at high risk of cuckoo-contamination are known to ‘mob’ cuckoos to drive them out of the area.[24] Parasitic cuckoos are grouped into gentes, with each gens specializing in a particular host. There is some evidence that the gentes are genetically different from one another.

Noble Lady-unlimited vacancies, Thus I would only use wings in the necklace pendant. Wings means they are at a position to get ready to depart to a higher status. They are polishing themselves to get ready in the game.

Last but no least, Xiunv as a hair pin. Xiunv are merely the candidates for the beauty pageant. Their status is low and they might not end up the Emperor’s concubine. So their fate is unpredictable. I would like to use feather to depict them as feather is the most common thing in birds and it can be found in any bird. Whether it is a feather of phoenix or a feather of sparrow, depends on fate and their effort. Also,  the shape of feather is coherent to the shape of hair pin, which makes it easier for the design process.

To depict each breed of bird, I am not going to design in a very realistic way. The birds are just references to give each piece of jewelry better meaning.

Some references are from Chinese classics, poems and tales.