Compared to the previous readings where we learnt about thoughtful interaction or Social practice art, Minimalism, a movement that kickstarted in the late 1950s is an extension from the abstract idea that art should have its own reality and not be an imitation of some other thing. Tate states that we tend to think of art as representing an aspect of the real world (a landscape, flower, person, etc), or even to reflect an experience such as an emotion or feeling. However according to Frank Stella in the context of minimalism, ‘What you see is what you see’.

With minimalism, no attempt is made to represent an outside reality, the artist wants the viewer to respond only to what is in front of them. The medium, (or material) from which it is made, and the form of the work, is the reality.

One aspect which I enjoyed from the exhibition is the inclusion of artists/artworks that utilises the many interesting mediums that can be used in this movement.

But the artwork that really appeals to me is Blank Paper by Liu Jianhua.

‘Blank Paper’ by Liu Jianhua at National Gallery –  the folds at the tip of the “paper” is made intentional. To me, it shows a more paper-like and fragile quality of the work itself. 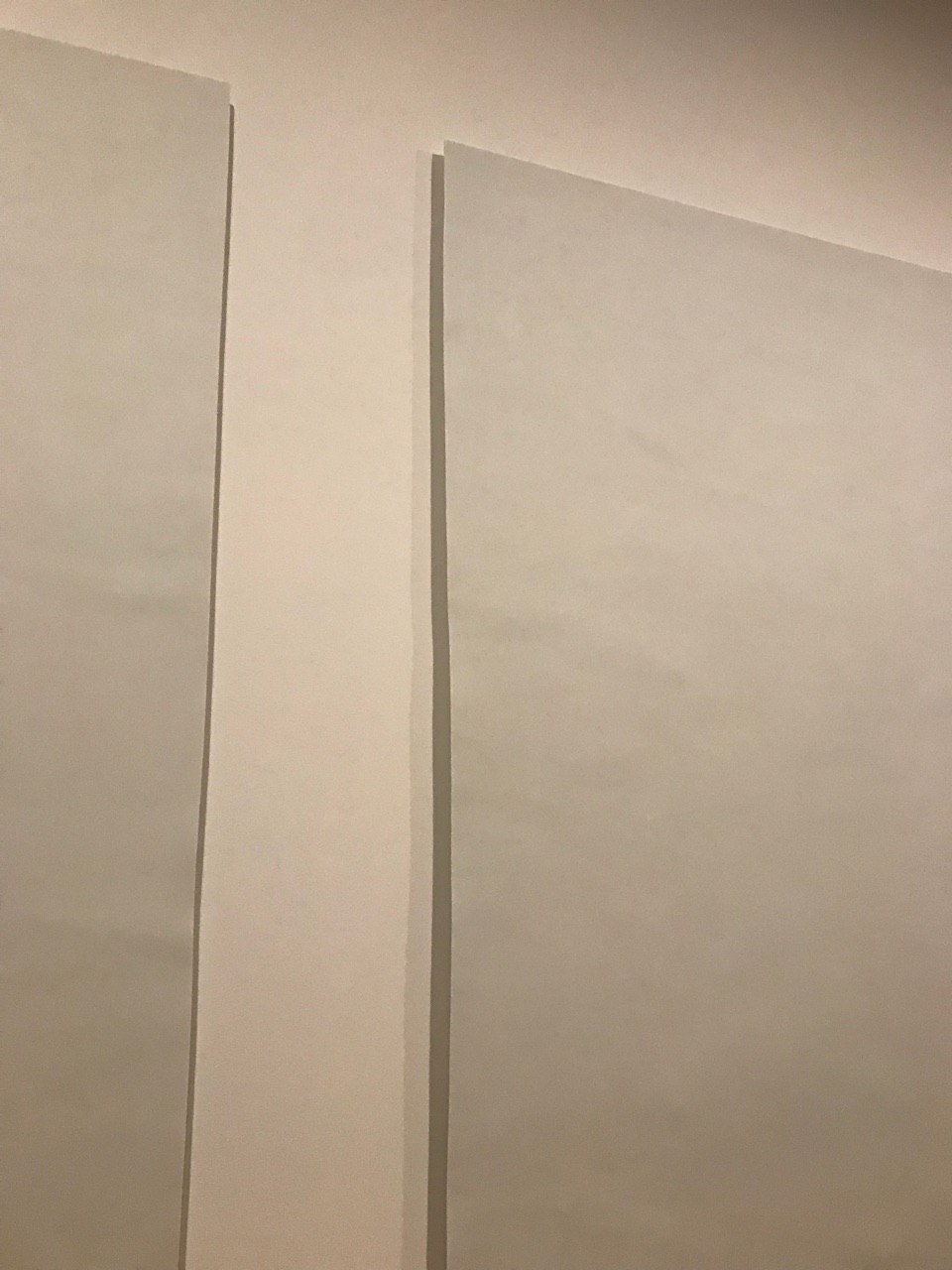 ‘Blank Paper’ by Liu Jianhua at National Gallery. One is also able to see the thinness of the porcelain up close

Exhibited at the National Gallery, Liu Jiahua’s ‘Blank Paper’ consists of 3 large porcelain sheets that is thinly crafted to resemble blank pieces of paper, similar to the title of the art piece.

Where do their ideas come from?

Jianhua first learned his craft at the age of 14. He learnt traditional ceramics by his uncle, a ceramicist, in the city, Jingdezhen, the centre of China’s porcelain industry. He then went to the Jingdezhen Ceramic Arts Institute, studying fine art and learning contemporary art styles.

Most of his works involves the usage of porcelain, ceramics, gold, and fiberglass.

I have also read up about galleries explaining that his work has often been interpreted as a comment on China’s rapid economic development and industrialisation and its role in the globalised economy, which to me, is along the same theme that Ai Weiwei explores.

Hence, it can be suggested that his ideas mainly comes from his upbringing and culture. Based on his main choice of materials such as ceramics.

What was their process and methodology for creating their works?

Silke Schmickl, the curator of the gallery roughly explained on the curation and the process of displaying this piece. She said that Jianhua himself created the sheets by rolling it out into thin pieces. I believe that he needed time to experiment with it, as it is quite difficult to find the correct combination of water, clay, heat and etc. Just like baking.

She also explained the difficulty of putting up the artwork due to its fragility. Something along the lines of having to put it onto something, akin to a platform(?) and placing screws onto it so it does not directly stick onto the piece. On other pieces of work, she also explained the steps they took to care and display it. Making the museum come to life, and it is something I appreciate from the experience very much!

Which artworks do you think work well and why?

I believe that this piece, and his artworks in general is inline with the minimalism theme. The following quote by Heini Lehtinen explains how this piece falls into the minimalism category:

“In his work (Liu Jianhua), the Shanghai-based artist places strong emphasis on form and material to the point of standing away from prevailing tendencies in contemporary art, such as social commentary and narrative approaches. With a “no meaning, no content” approach to art, Liu focuses on form and methods of industrial production in making artwork, in which he transforms paper, leaves, bones and ink drops into fragile and at times surreal porcelain sculptures.”

Personally, I this piece appeals to me mainly because of the juxtaposition and play of the material itself, porcelain. I think it is a very smart way to reinvent the usage/concept of materials that we are taught to presume in our society. The blank canvas also makes me think about what I would actually write on this “paper” (probably something very important), as it is extremely fragile and “expensive” due to the craftsmanship that involves into making it. Personally, it is a reminder to be more careful of the words we convey to people.

Thoughtful Interaction Design: A Design Perspective on Information Technology by Jonas Löwgren and Erik Stolterman was an eye opener for me, mainly because it is one of the few design related books/articles that I have actually read so far. Reminding me of the importance of doing so for there is still so much to learn in this field.

One of which is the intriguing aspect that the role of the designer is important. In fact, far more so than I had previously had recognised. Definitely, I was aware that designers have the ability to shape and influence the public with what we create. But this sentence from the opening paragraph elevates and aptly phrases my feelings towards our job scope:

“We live in an artificial world. It is a world made up of environments, systems, processes, and things that are imagined. formed, and produced by humans…Someone has to decide their function, form, and structure…”

Hence, personally the role of a designer is akin of a gatekeeper. For we have the ability to decide the hierarchy of information, the details that is to be highlighted/hidden, the organisation, structuring or categorisation of the final product and so on. Hence a point that I want to apply in my own working process in the future is to always ask myself what and how I want the user to experience from my works.

Because the book highlights that we do not just create for the sake of meeting a clients brief or to create something beautiful, but instead we ought to be thoughtful designers.

“Being thoughtful is abut caring for your own design ability, the designs you produce, and how the world will be changed by your design ideas and decisions. A thoughtful designer is someone who takes design as a serious and important task and who tries to become a designer with the ability to create something fascinating, authentic and useful digital artefacts”

What are we creating for? It is easy to create something interesting and beautiful on the surface. But personally it is always important to remember the message we want to impart to the viewers.

And what I like the most is the fact that it balances the idealistic role of the designer by underlining the fact that designers does face undesirable restrictions and limitations that might affect our final output. For example, having short deadlines or unreasonable requirements. But the authors aptly says that:

“Blaming poor designs on the preconditions ns the situation is not a way to avoid responsibility…Being successful in design means being able to handle the everyday practicalities, and to deal successfully (or at least adequately) with different technical and social contexts”

Which is basically saying, “Suck it up and keep grinding”.

To me, this book empowers my idea of what a good designer should be. And despite my reluctance to read this piece due to the number of words and pages, I am really glad to have embraced this reading and will definitely keep these information in mind for my future work.

One work that showcases the work of thoughtful design is  the Estonian Forest Installation that is created from interior architecture students from the Estonian Academy of Art.

This piece enables users to relax in these megaphone structures that captures and amplifies all the beautiful foresty noise of its surroundings at Võrumaa, near the Latvian border.

Thoughtful design created and executed by students, meaning that we very well have the ability to do so too. It taps on the densely forested areas of Estonia and elevates the people’s experience of the forest. This is not only a spot which locals now enjoy, but one where foreigners flock to as well.

Hence for our very own projects, what are somethings within our environment we can tap on that might be overlooked in our daily lives? What sort of experiences and message can it bring to the people who interact with it? And lastly, this assignment makes me think about the kind of designer I want to be.

Viena is an undergraduate from Nanyang Technological University (NTU) in the Art, Design, and Media program. Her interest of immersive spaces leads her to explore different mediums and mechanics for new ways to reach out to her audiences. Viena believes that this platform has the capacity to convey thoughts and influences to individuals in a multi dimensional way. On the side, she also enjoys illustrating and storytelling through videography.

Light|Dark is an interactive light installation consisting of 46 blue lasers suspended in a pitch dark room. The floor is coated in luminous paint which absorbs light emitted by the lasers, allowing viewers to use the lasers to draw patterns on the floor or to simply walk through the installation. The momentum and rhythmic motion caused by moving the lasers creates stunning galaxy-esque patterns on the floor. View more here

Despite being aware of the destructive effects of the high consumption of our sometimes unnecessary waste that is rapidly diminishing the natural environment, we are often de-sensitized to the magnitude of the issue.  The installation integrates data visualisation and interactivity in an attempt to portray these long lasting effects of our “throwaway society”. As the structure captures the beautiful world that we perceive to be living in, viewers are then caught unaware of the sudden hit of reality that is portrayed from the interaction. View more here

With social media being so integrated into our lives, the things that we voice on the online space sometimes does not seem to have a consequence in real life. Hence, this interactive T-shirt which is connected the users Twitter feed forces the wearer to be much more conscious of what they are posting online. The public can also interact with the shirt by liking or reacting to the tweets, heightening the wearers’ awareness of their posts. View more here

View even more of my works on my Behance account, right here! 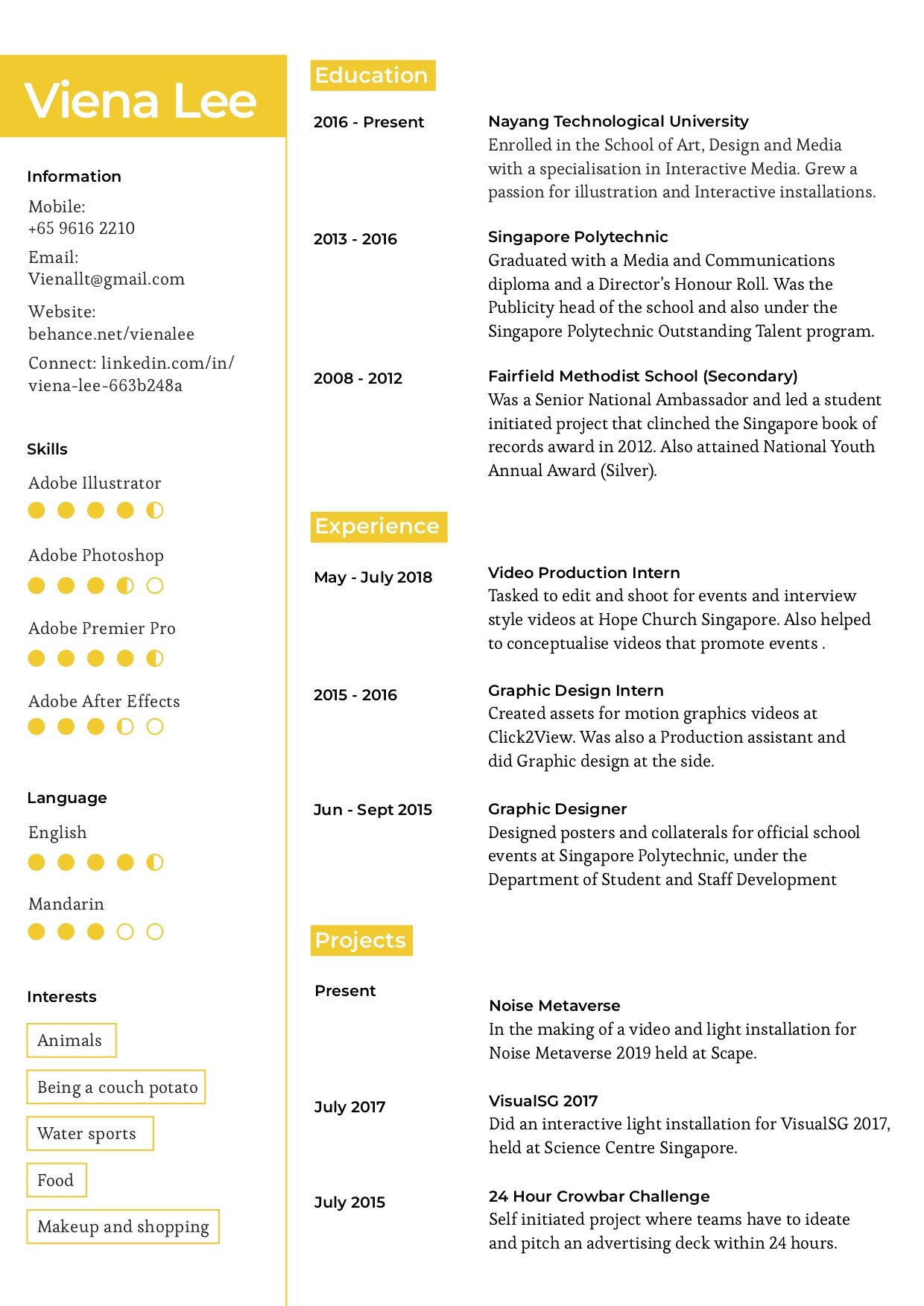 I really enjoy light and sound installations in general, and besides one of my favourite studios which is Nonotak,  I really enjoy the works Satoko Moroi, who is a communication designer hailing from Japan.

What is enjoyable about her works is how it taps into each of our inner child, where the installations are so colourful and simple.

Here are other light and sound installations that I like too: