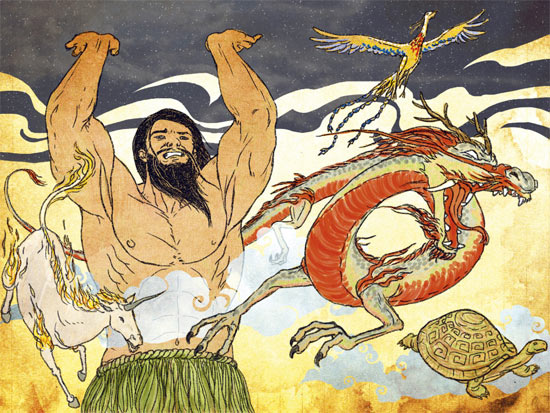 The Chinese myth of the creator Pan Gu can be traced back to around 600 B.C. The legend says the universe was a formless chaos. This chaos coalesced into a cosmic egg for about 18,000 years. Within it, the perfectly opposed principles of Yin and Yang became balanced. Inside the egg, at first was “a mass called no thing”. Pan Gu was the being that was to develop from the egg. Pan Gu emerged and become the creator. “Pan Gu was the size of a giant. He grew ten feet a day and lived for eighteen thousand years”. With his chisel, Pan Gu shaped the entire earth. Yin became the earth and yang the sky. To this day the concept of yin and yang represents all types of balance within our universe, and stresses the need for balance in all aspects of life.

Pan Gu acted as the ultimate architect, carving out all of earth and adorning the heavens with the moon and stars. Only when Pan Gu died could the process be complete. When his death came, his body and soul all became parts of the earth. From his head were created the Sun and the Moon, from his blood the rivers and seas, from his breath the wind, and from his voice the thunder. Finally, human beings were generated from the fleas which lived on him.

Some versions of the Pan Gu creation myth state that the giant had help from four mythical beasts. First, the turtle: the Chinese were not the only ones to use it in their creation myth; various world myths, creation and otherwise, include the turtle for its strength and immortality. The qilin, though indigenous to Asian mythology, is said to have been dragon-like. While being central to Asian mythology – dragons are also found world-wide – as bearers of wisdom and a symbol of power, also connected to the succession of the early emperors. Finally, the phoenix which has consistently been a symbol of rebirth.

The interesting aspects of this tale are its similarities to other myths. For example, the cosmic egg is a common concept that is indicative of the universe before the Big Bang occurred, scientifically speaking. While this may, at first glance, be a very primitive way of describing such an event, one cannot help but notice how very insightful it is.