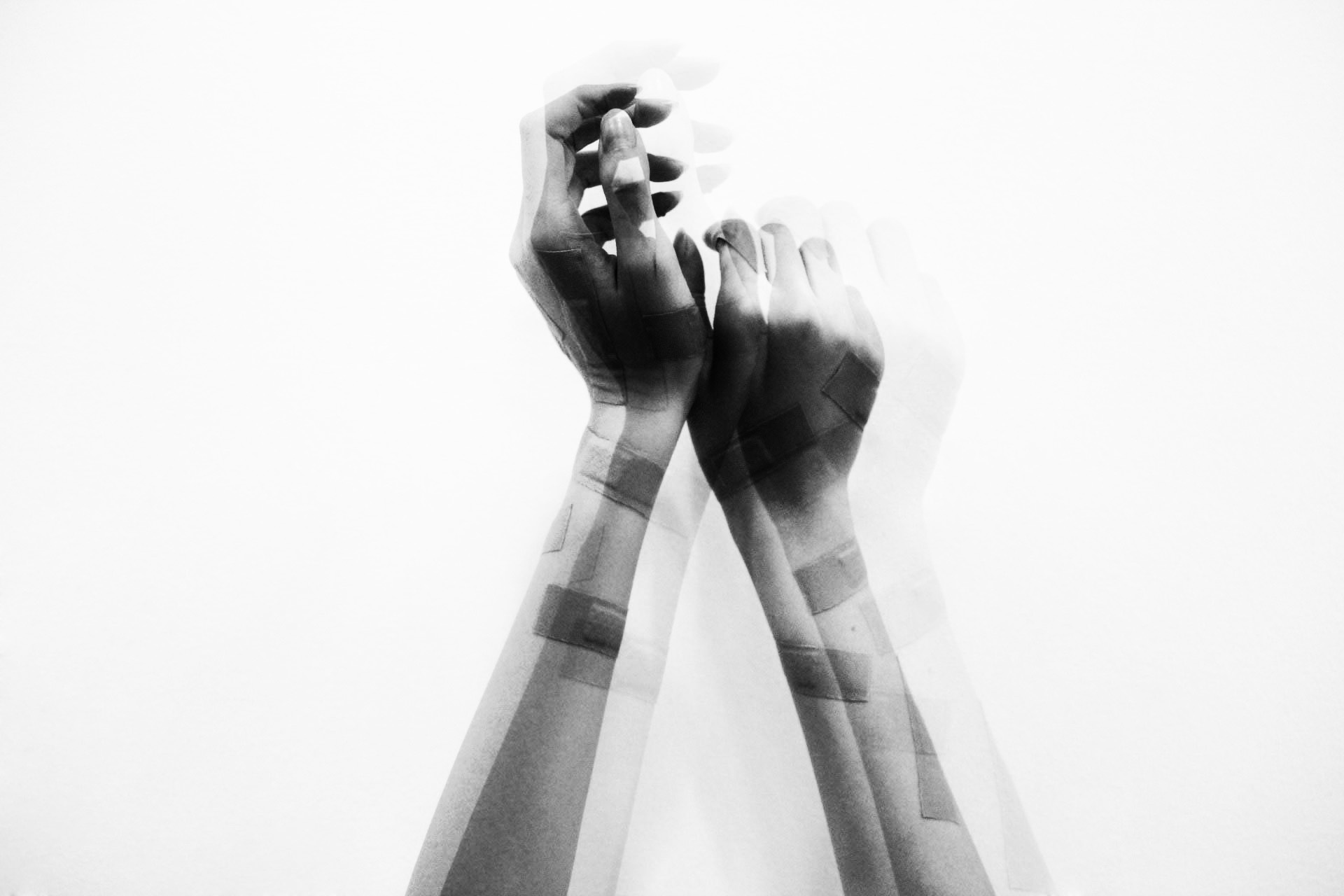 My intention behind this photo series is to convey the idea where dreams are better than reality, and that one would much rather remain sleeping than wake up. From there I considered the reasons as to why one would consider dreaming a better place to reside in than reality. At first I considered the idea of a three part dismantling of a fantasy relationship, but felt it would be too typical. Finally, I considered depicting a person’s fixation on their failures and how this pushes them finding escape in their much brighter, much more successful dreams, quite literally.

Inspired by a personal friend’s trials, I decided I was going to attempt to depict the character’s trial with depression and self-hate in their waking world, and how in their dreams, they are the complete opposite of themselves.

This photoset is really a four part series instead of three:

The first major scene will be with the character in their dreams where they are everything they want to be, and what they hope and what they wish for. I wanted to make sure these two worlds are shown to be separate and a stark contrast from each other from the start.

The second major scene is meant to show the stark contrast of reality, compared to soft colours of their dreamscape. Their reality is meant to be mundane, boring, black and white. There is a boredom to their routine, cold, lifeless and repetitive in a way that does not come from discipline, but from apathy.

In the third part the character herself becomes unable to discern between the truth and the lies. Dreams and reality start overlapping; she wants so badly to escape to her dream world that her reality has been tainted by her fantasies. This is also where she feels the extent of her failure, her expectations the most, weighing in upon her like a dark cloud.

Finally, she makes her choice in the fourth scene: going back to her Dreams, where she could be so much happier, where her failures disappears and her expectations are realised.The viewers themselves start becoming confused: has the character really been dreaming? Or has she been awake? Was she ever awake at all? Or is this still part of her dreamscape? The ending leaves itself to ambiguity. She could be sleeping and dreaming again, or the pills could ultimately have chosen to take her from her unending, harsh realities. It is up to the viewer to decide.

The reality and overlapping shots are in black and white as I wanted to depict the mundane quality of the protagonist’s life. This is to contrast against the soft, brightly lit colours of her dream. In her dream, her friends are faceless, as is real dreams where you never really truly remember who you were talking to or interacting with. The shots here also include more wide shots to really show off the environment. The reality and overlapping shots are more close-ups, to really get up close and personal to the character and her trial with this illness.

My artist references are Katie Crawford and Christian Hopkins.

Katie did a series called My Anxious Heart, whereupon she depicted her own journey with anxiety. Her images depict the many symptoms and effects of anxiety, with dark imagery helps one understand the impact the illness has on her.

Christian Hopkins himself did a series on his own trial with depression. The dark, eerie photographs really capture the essence of his battle with this mental illness. One can really feel how much it holds him captive in his embrace. Not only did I gain a better understanding about depression as an illness and it’s effects on their victims, I also learned how to inject more emotion into my imagery. I also gained more knowledge about technical skill and composition, and how to tell a narrative with images so as to form a cohesive story. All in all, it was a very interesting and eye-opening experience that really let me gain insight about a mental illness, as well as the technical aspects of the project. 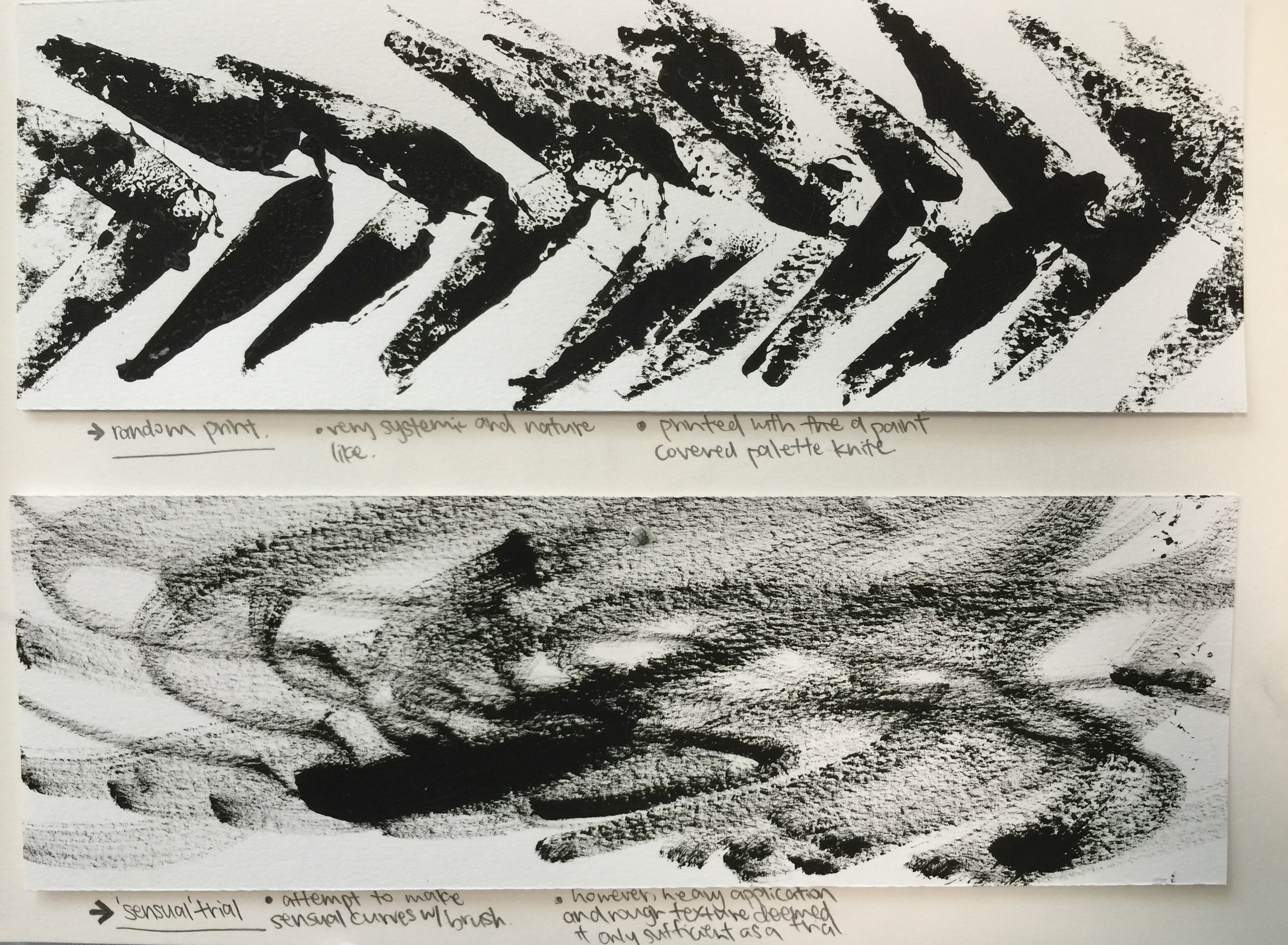 The project itself is done with various experimental monoprinting methods with random available materials. The final product is below: Of the entire print set, the ones I felt best encapsulate their stipulated emotion is:

With this particular emotion I first considered the idea of anxiety and anxious feelings. Inspired by a friend, the idea of social anxiety popped into my mind, and it would be interesting to be able to depict this through the print. I decided to dip my fingers into the ink, and rapidly tapped out this piece, making sure they were as random and arbitrary as possible. I wanted to depict the idea of a constant overlapping of people in one’s life and how too much of it becomes overpowering and terrifying, even dark. When someone with social anxiety is faced with a large group of people, they tend to become fidgety and anxious, and they won’t be able to stop moving. What I wanted to go for is an almost fearful aura, especially because of the numerous fingerprints, but I really wanted to depict that anxious, terrified feeling one would get from social anxiety.

I really wanted to convey the idea of impulsivity here in this piece. What I decided to do then, was take a piece of plastic, crumple it up, unfold it, and dip it in paint. This resulted in varying textures as the plastic wrapper would form different folds and contours. When I then started pressing the wrapper onto the paper, it was able to form a varied texture. Some parts will have thicker paint which therefore leaves a large patch on the paper. It was able to recreate the texture of splattered blood which makes it visually interesting.

I decided to go experimental with this piece and utilised the side of a brush. I dipped it in ink very lightly, and the contours of the brush was able to form this interesting texture that felt like paint lightly running across the paper, but yet with a strange structure to it. I made sure my touch was light so that I could really capture the essence of fragility, and the odd spots of paint only adds to the illusion of fragility.