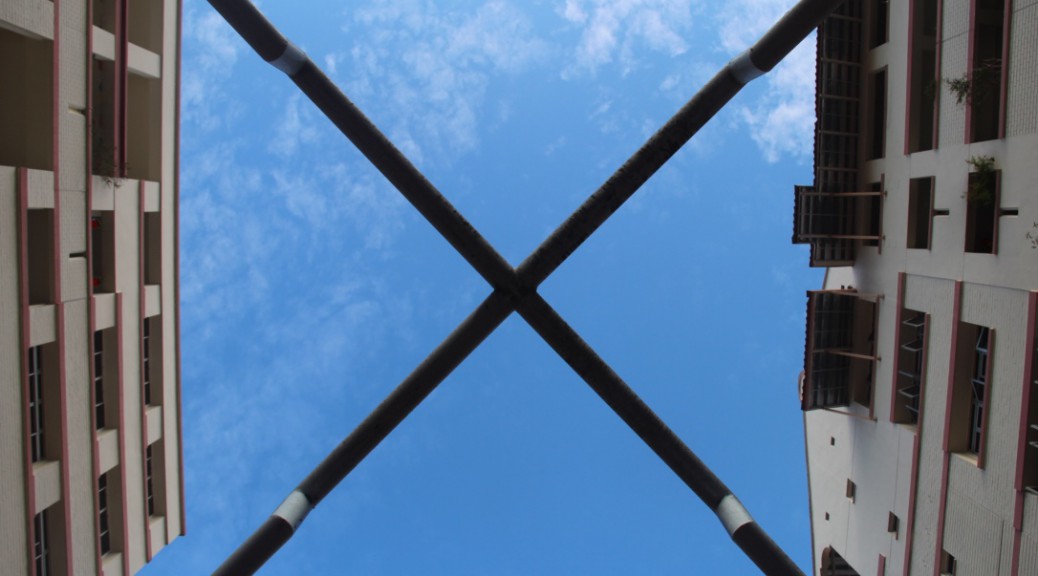 “We could never have loved the earth so well if we had no childhood in it.” – George Eliot (Mary Ann Evans).

I think I have ADM to thank for this one. Without my new project, I never would have thought of going back to Yew Tee a visit. Not because I hated it – coming back made me realise how much I didn’t know I missed – but because it felt like a memory so distant I hadn’t thought of reaching that far. 8 years is a long time. I may have moved away when I was twelve but the neighbourhood has moved on without me too.

The night before I went back, many hours were spent reminiscing about the memories I had left behind before I drifted off to sleep. There’s something about nostalgia that makes everything seem a lot more beautiful than it really was at that point in time. But I was excited. A part of me was torn though: do I want to see a changed neighbourhood, or do I want the old one back? Same, stagnant and unchanging?

It’d be amazing to still see the same structures and know you once left your mark behind. No one would know how important it is, but you would know. And yet, for a place to remain wholly unchanged is impossible. No space is void of the passage of time.

These feelings warred within me that night and sleep was fitful. By the time morning came, I was tired but my excitement remained an all time high. Armed with my camera, I was ready to spend my morning exploring my unfamiliarly familiar childhood home.

Visit a place or an area in Singapore that you have not been for quite a while. Go on a wander, what did you see, smell or hear?

Going back felt like a rush of nostalgia slapped me in the face. I’ve gone to Yew Tee point a couple of times for breakfast with my dad, but I never truly went home. Not the home where childish innocence had still filled my days. When I spent more time making up stories in my head then I did staring down at textbooks and hoping they’d make sense one day. (They never did, it’s why I’m in art school.)

I think I may have spent too long looking and just feeling instead of taking proper photos. Things have changed no doubt. The playgrounds got a bit of an upgrade. So did the elders corner. But the HDBs were still the same shade of pale pink and purple. I remember imagining myself a gymnast on this very marble bench. I could still see my young self hiding behind the familiar walls of the void decks.

Every corner I turn reminded me of something I did when I was a kid. I had spent so much time in these places. I traveled far and wide; I was a doctor, a princess, a robber, a spy. All in the same little neighbourhood. These blank walls carried my innocence and I felt childlike again wandering amongst them.

But there was a stillness present now.

Perhaps it is because I was out at 8am in the morning, but I knew something had changed. Preschools and eldercare centres have taken over some void decks. Everything was denser, yet emptier at the same time. So much was done to urbanise the place, that not enough was done to take care of it’s spirit. But it still felt like part of me, changes and all.

There is one particular place I used to frequent as a child. It was a small hill – our own patch of wilderness, a colourful contrast from the pastel HDBs and the preschools. And it had been my haven.

I don’t think this space was ever a secret. After all it, had stairs leading right up into it. But for the better part of my childhood years, this hill and the woods atop it was my Narnia. It was my alternate dimension. Many a pinecone fight was had with my brother amongst these very trees. From where I was, it looked relatively untouched. With high hopes, I climbed the stairs, heart thumping with anticipation.

Sparse. That was the first thought that came to mind. Eight years ago, trees would have dotted the entire green expanse. There would have barely been any space for my brother and I to play makeshift baseball with fallen branches and pinecones. Now, stumps poked through the grass, dismal and decaying. The sun hasn’t changed much. It will take billions of year before it does so it shines, filtering through the leaves just as beautifully as it did eight years ago.
I breathe in the scent of grass and old wood. The air is already much fresher here.

The only sounds accompanying me is the breaking twigs under my boots and the occasional chirp of an insect or bird. Here, where the trees blocked out the road and the cars, I could imagine myself in the shoes of my younger self again. Slowly becoming the person that I am.

Another feeling has long since started churning in my chest together with the nostalgia.

Twelve years I had spent here. In those twelve years, things had changed too. But I’d never felt it as acutely as I did now.

We don’t notice when large swathes of time passes by in the form of months and years. It only gets faster the older we get. It traps us in the increasing list of things we need to get done. We can’t stop and think about what that means because ironically, we just don’t have the time to.

I try to abandon this depressing thought, but it is niggling and persistent. I take the longer trek down towards the playground and my old block instead. It’s around 9:30 by the time I finish my reminiscing. Tiny, uniform-clad kids start emerging from the nearby preschools, chaperoned by their young teachers. They’re still young and innocent – I miss those days.

I head to a mini mart next to my block first. This is a place child-me always ended the day at. After a long afternoon of playacting, cycling or playing catch, I would have headed to this neighbourhood mart to grab a drink or an ice-pop for a couple of cents. Those were the days before inflation hit us and we could still enjoy something for the mere price of ten cents.

I enter, avoiding eye contact with the familiar old couple at the counter for fear of recognition because small talk is the bane of my life. Despite this, I was still glad to see them there. Knowing that they were still keeping up the family business, even if the store name is new, made me realise some things will never change. The neighbourhood will always be depending on them for their family necessities. And the children their dueling cards.

However, I did not expect the familiar owner of the store to stop me with a “小妹，找什么吗？” (Looking for anything, girl?) He was still on the plump side, friendly and solid. Except he now had shaven head of short, white hair and the face full of wrinkles. His wife had aged as well, but their smiles remain just as bright when they greet their regulars.

I couldn’t run away now, I had to make conversation. So I did.

“Oh no, just looking.” I replied, hoping I didn’t look embarrassingly awkward about trying to sneak around their store unseen. Taking a chance, I decided to continue.

“It’s just I used to stay here a long time ago, and I thought I’d come back to take a look.”

Unfortunately since I never knew their names despite my years of living there, I shall refer to them as Auntie and Uncle in the following conversation.

“Oh! I remember you, you used to come here all the time.” Uncle said. He speaks to Auntie. “You remember her, don’t you?”

Shocked and touched, I replied enthusiastically. “Yeah! I miss this place a lot. It’s so great to see you! It’s been so long.”

“You had a brother too, didn’t you? You’re so tall now. Came back to take pictures?” He motioned towards the camera I was carrying.

We continued chatting as I explained my project and I reminisced about my memories of the store. Slightly teary, I left the store feeling full and warm, the happiest I have been in days. Despite the long eight years, they still remembered me. It would have been easy for me to slip between the gaps of their memory, but no. I was still there, and so was my brother. Together with everyone they’ve ever served in this neighbourhood, they were remembered. Seeing and talking to them felt like I had cemented my almost dreamlike existence in this neighbourhood.

I had been here.

I was also glad to see that not much has changed about my old block. The tiled flower upon the floor is the same, the letterboxes where I remember them. The stairwell I used to take to race all the way up to my old apartment on the sixth floor is still there, dark and eerie. Even the scent was familiar. Just the faint smell of the rubbish from the trash dump behind mixed with the old smell of the lift lobby. Something that used to irk me instead brought back a flurry of memories before my eyes.

The view didn’t change much either. It’s so strange to see everything look so familiar yet feel so sadly foreign.

Coming back, I realised there was so much about this place I missed without know I had missed it until I saw it. I miss how I would dash down in the evenings to hang out with the neighbourhood kids. I miss how I could spend hours playing on the playground without a care in the world. I miss how my this place meant to my childhood. The sight and smells are different, but vaguely similar. That hurt me more than seeing a complete overhaul of the neighbourhood. Knowing that those places remained a fixture even as the world changed around it, it almost felt like they were waiting for you to come back. And I’m glad I did.