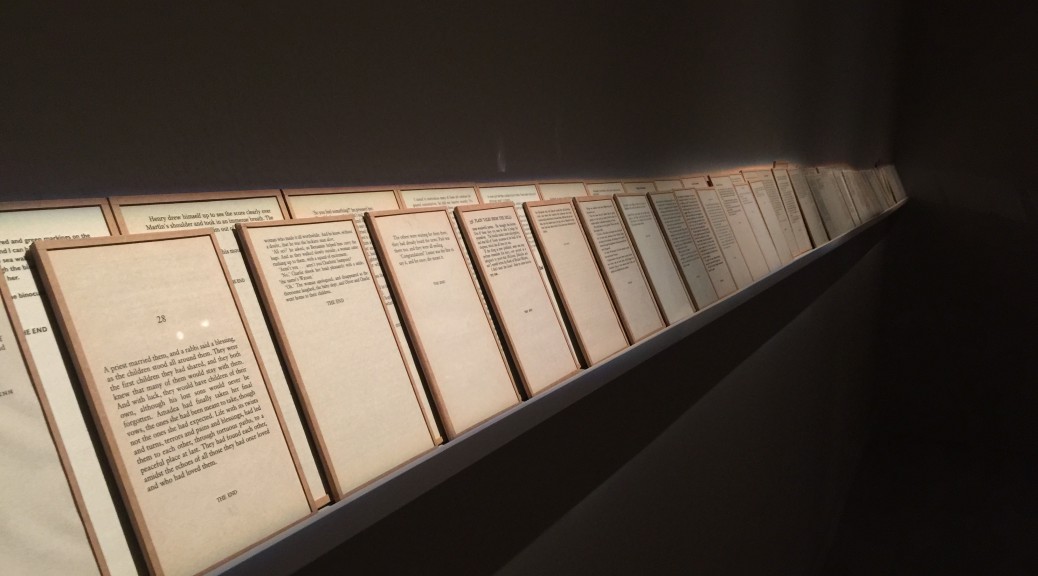 Embarrassingly, I didn’t actually realise the installation was an installation at first. Walking into the room, I had initially assumed that the column of books was just a plain simple wood pillar. Upon closer inspection, the seemingly wooden pillar was actually constructed out of tightly compacted, yellowing books, their spines pushed against the wall to hide the titles. I was amazed by the sheer height of it; the column of books appeared to stretch right through the ceiling. As a book lover, I was immediately intrigued to know the meaning behind this installation. Books are used frequently in installations, but different artists can always offer a brand new perspective towards their utilisation. Strolling towards the next part of the exhibit, it took me a few seconds before I realised that the pages were all perfectly cut pages of book endings. Framed in brown tape and stacked on top of each other, they occupied a shelf the entire length of the wall. The only thing that ran through my mind as I scanned the pages was my intense need to know the story. My eyes kept flitting towards the top of the page where a title would usually be placed. Some contained the titles, but almost all of them refused to reveal the story they belonged to. By the time I reached the end of the shelf, the fact that I recognised next to nothing was extremely frustrating.

I then proceeded to the description, which instead of providing me a definitive answer, only served to throw more questions back at me. The idea behind the installation definitely became clearer to me however. With the spines turned away from the audience, and the titles missing from their pages, one could never truly know which book the ending belonged to. The artist almost wants you to construct your own ending. Ironically, instead of providing a sense of closure, the endings lead you wondering towards new beginnings. There is a lingering sense of mystery and unsettled curiosity. Especially when you realise no more can be gleaned from the installation, and that it was high time you left.

I like how the two pieces were installed next to each other. If they had been installed any other way, say more haphazardly, or even stuck against the wall, its visual influence may have been diminished. If the stack of books hadn’t reached towards the ceiling and disappeared out of sight, that never-ending quality of a continuous story wouldn’t have shown through. (I like that the artist removed the endings and then decided to show the stack of books climbing upward into oblivion. It’s almost as if the story itself could never be completed without a true ending.) At its core, they are complementary installations. Neither piece would have made sense without the other, or have made such a great impact on its viewers. It was definitely my favourite installation in the entire Time of Others exhibit.

As a person who has always been easily enchanted by moving image, this piece immediately caught my attention. Most of the time, I can never keep still enough to deliberate on a still image. Moving image however strikes a delicate balance between the silence of film and the articulation of movement – this is exactly what drew me to the piece. I saw that there were two screens, both simultaneously playing a silent film of a man of colour. In one frame, he attempts quite hesitantly to put on a stiff suit, committing many a faux pas. In the other frame, is the same man, already dressed, well-groomed and seated stolidly in his chair. I waited and watched quietly, my curiosity planting my feet to the ground.

In the first frame, the subject’s discomfort is clear. He constantly looked off-screen for directions. His suit was donned in a slipshod manner – vest unbuttoned and shirt untucked. He obviously knew next to nothing about what he was doing with that unfamiliar suit. Juxtaposed next to the well-established, impassive second frame, it makes you believe you were watching two completely different men when it isn’t the case. A still image would not have worked. It could not have provided this stage for the man to perform his awkward dance with the suit. The moving film was essential to document the process of the suit-wearer and his later, stoic expressions.

With next to no ideas on what the exhibit could mean, I proceeded to read the description. Once I finished, I began to see the piece in a new light. The suit, instead of being a familiar outfit, became a disguise for the subject. He had to remove his traditional clothing all to reach a semblance of supposed civility – a tired, grey suit. I could see now that the suit represented British colonialism, and the impacts it had left behind. To me, the artwork is a piece of social commentary on the abandoning of one’s roots in order to blend in with an order more accepted and ‘correct’. Wearing the suit wasn’t a choice – it was a directive. The need to wear a suit in an Americanised world has become the new mandate of respectable civilisation.

However, I could not have caught any of these meanings without the help of the description. Perhaps I just wasn’t thinking hard enough, but maybe dialogue could add sound and interaction between the subject and viewer. This piece was definitely thought-provoking and interesting. I would love to see more pieces with similar socio-political commentary.