For this project, we were to produce an audio soundscape that described a person, experience or environment. In my case, I wanted to challenge myself by weaving together the idea of physical landscapes telling a story through audio. I thought this would be an interesting way to explore the use of sound design in relation to a setting, because storytelling through audio and visual is very different. I hoped my end product would allow my audience to not only visualise the setting of the soundscape, but also conjure a story based on what they imagine as they listen to the sounds. 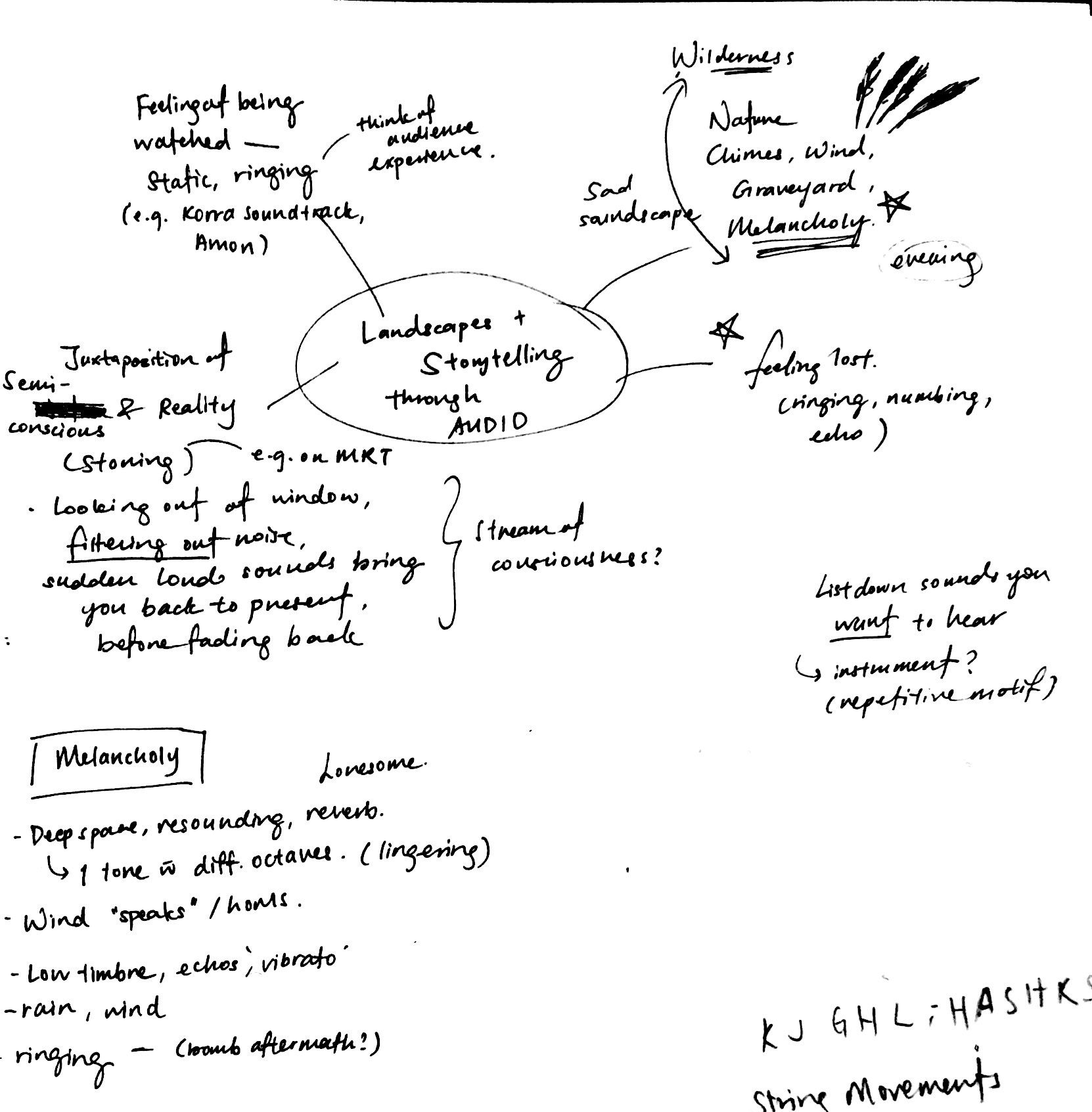 Initially, I had quite a few ideas, the most prominent of which was the idea of Melancholy. I pictured winds, chimes, a breeze going across a lalang field, and thought about what kind of sound would accompany this landscape. I knew I wanted it to be a ‘sad soundscape’, but didn’t exactly know how to put that across to the audience. I then came up with a list of sounds I imagined I would hear by looking at the landscape, all the while trying to get a sense of what the feeling Melancholy would look like.

I felt that listening to an ambient landscape created by others would help, so I went on Youtube to analyse how people put together a soundscape, and what different instruments or tones they used to create the mood for it. 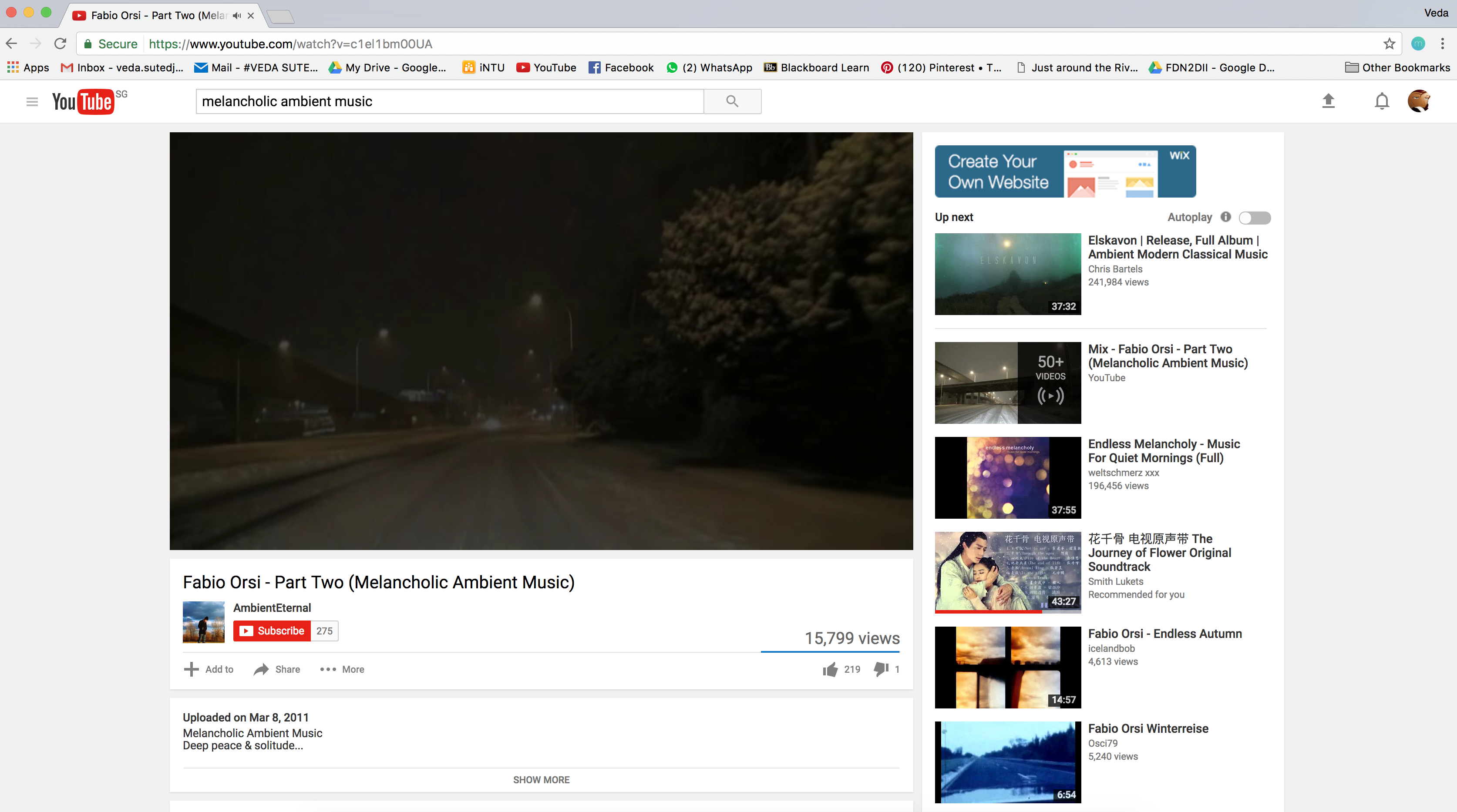 After referring to a few soundscapes, here is what I came up with:

Initially, I wanted to record chord progressions I played on the guitar to include in my soundscape. So I did some research to find out which chord progression was the saddest, and most people commented that playing in the minor key or major 7th key would produce that. 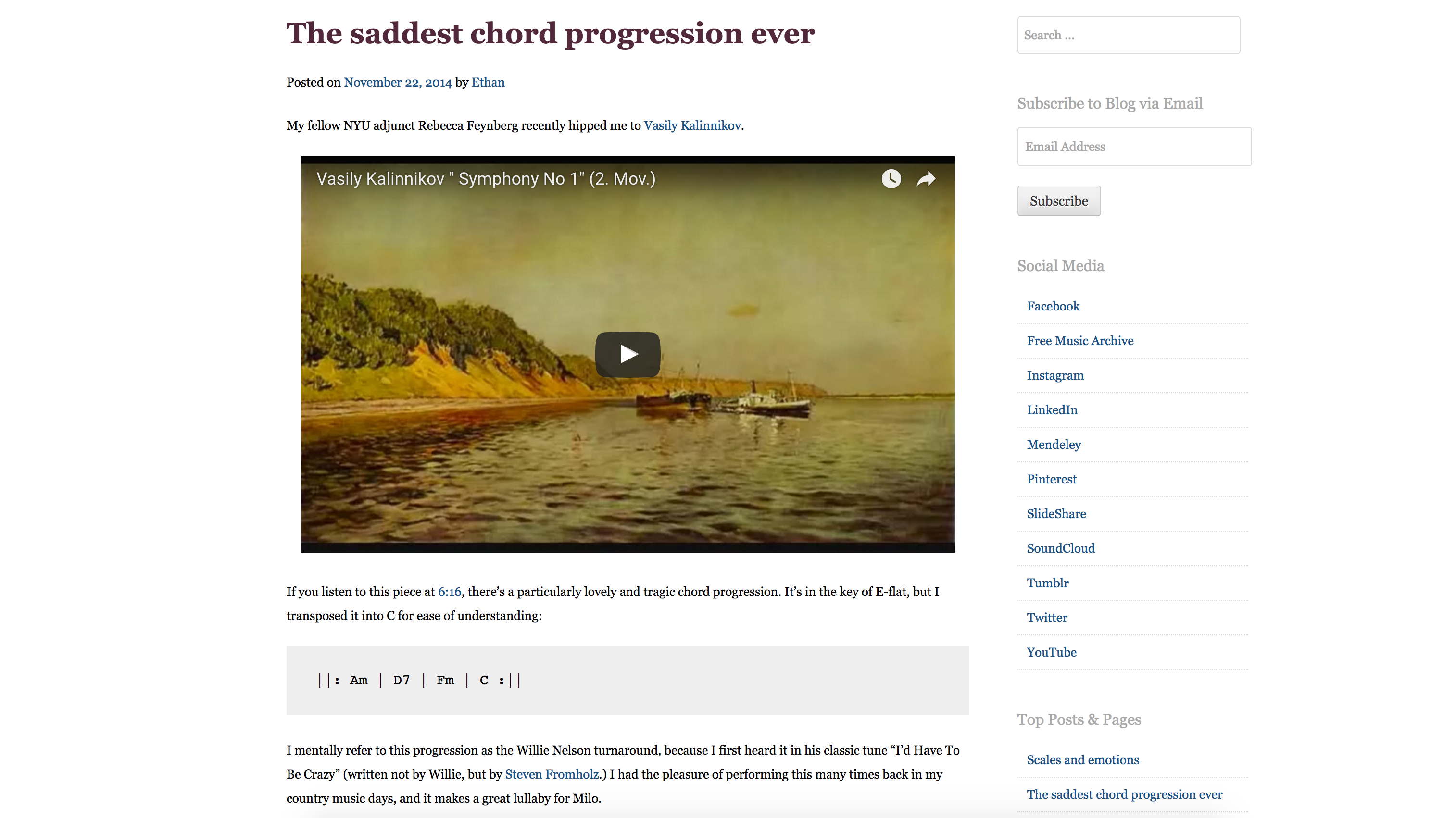 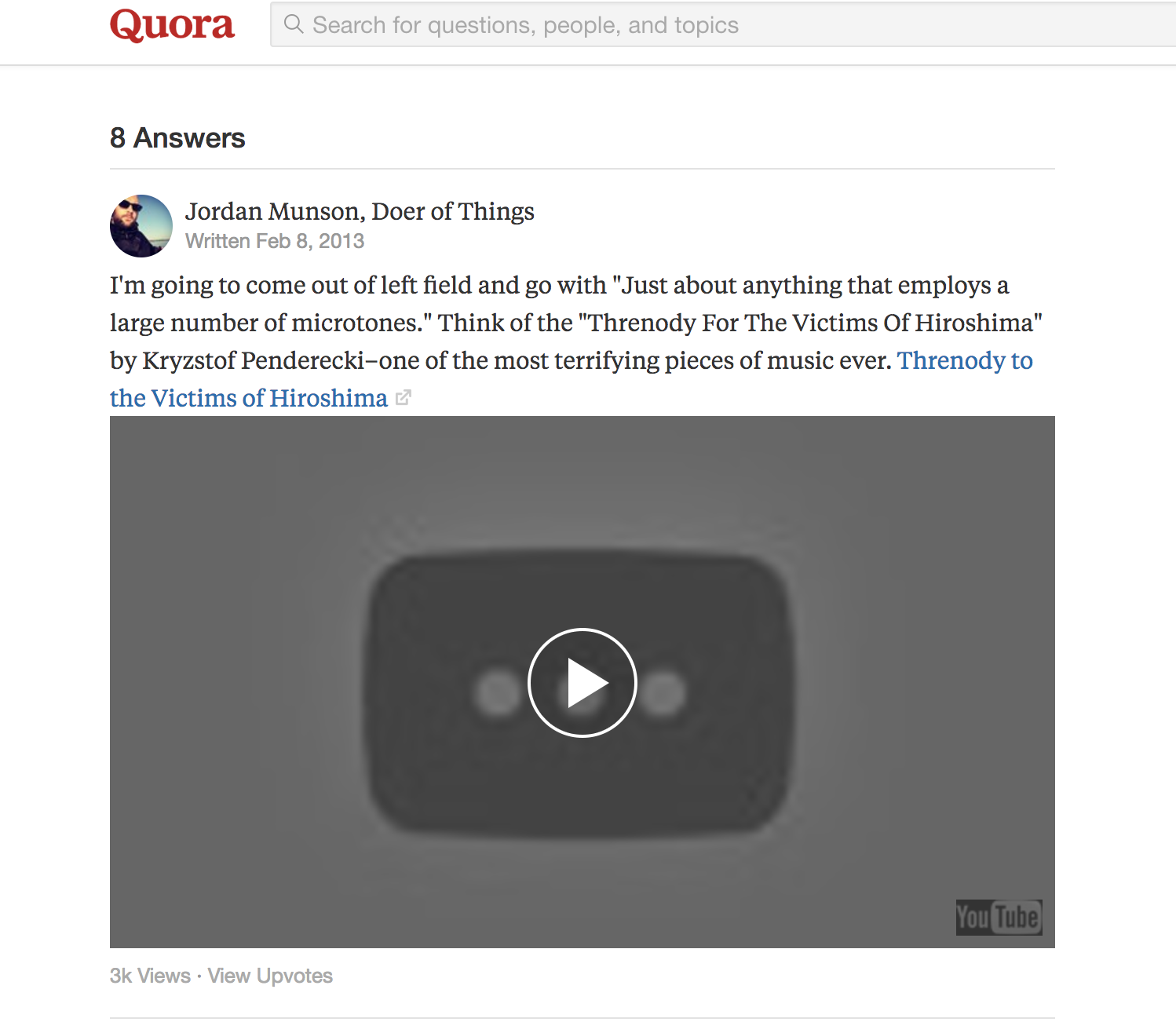 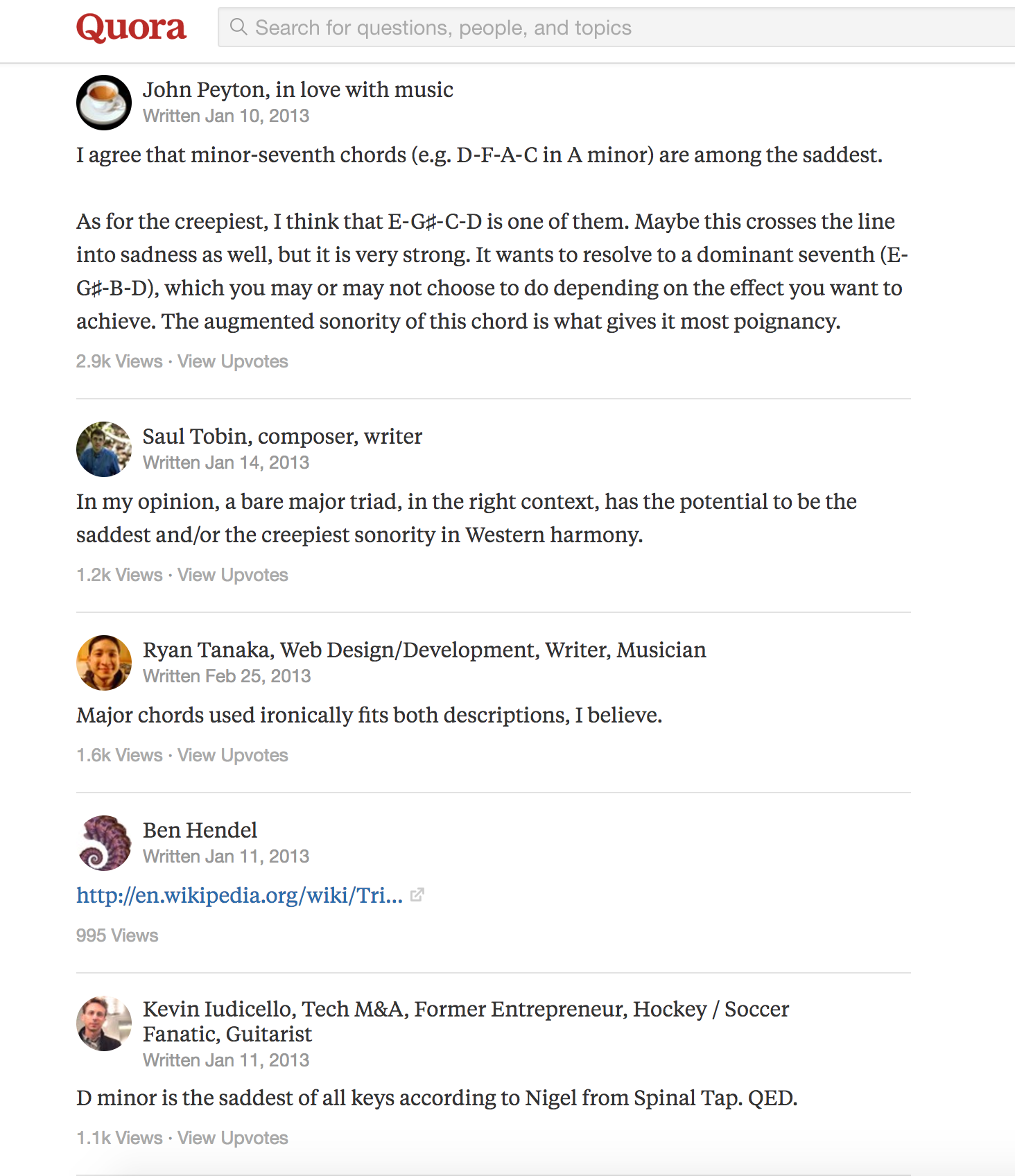 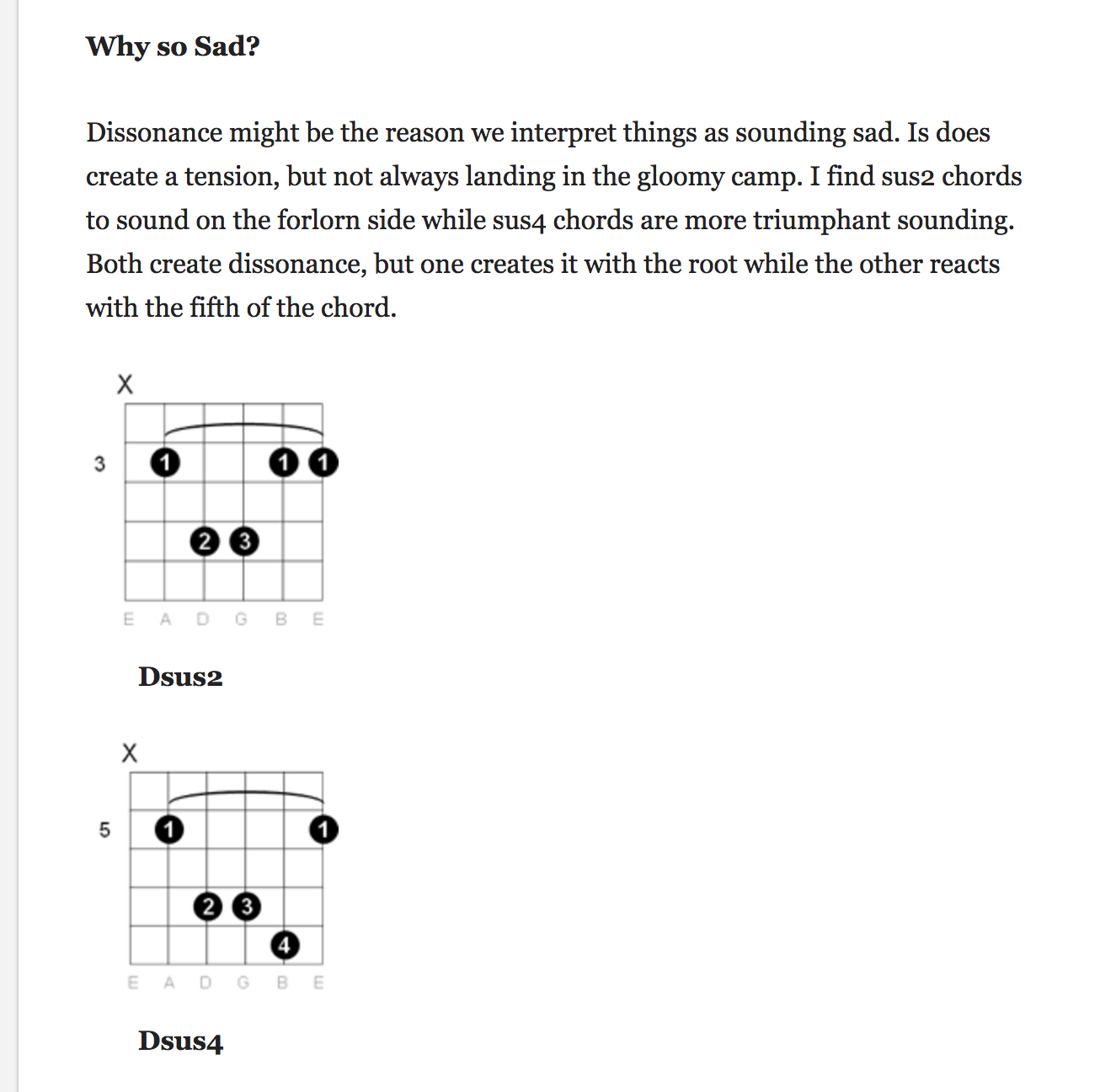 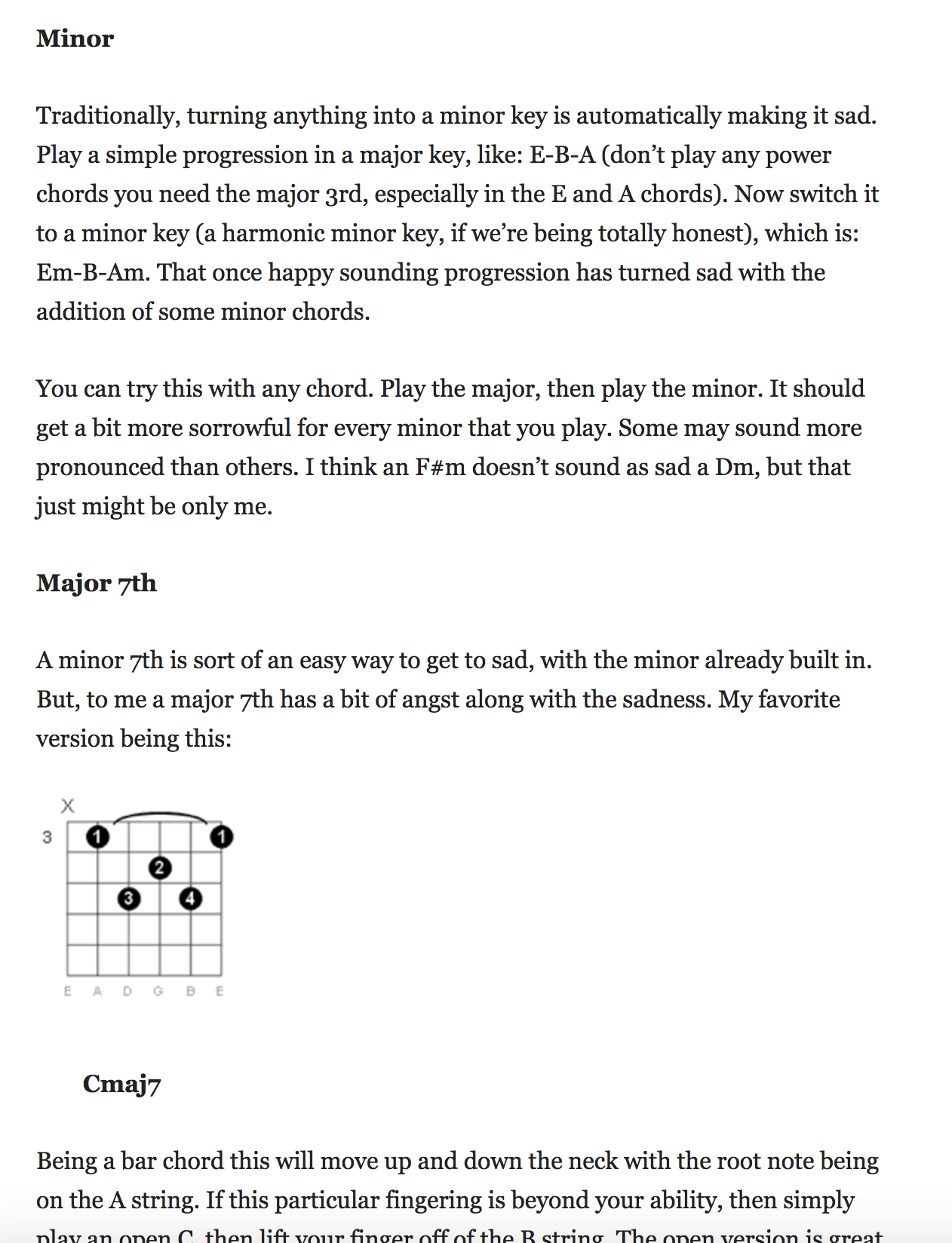 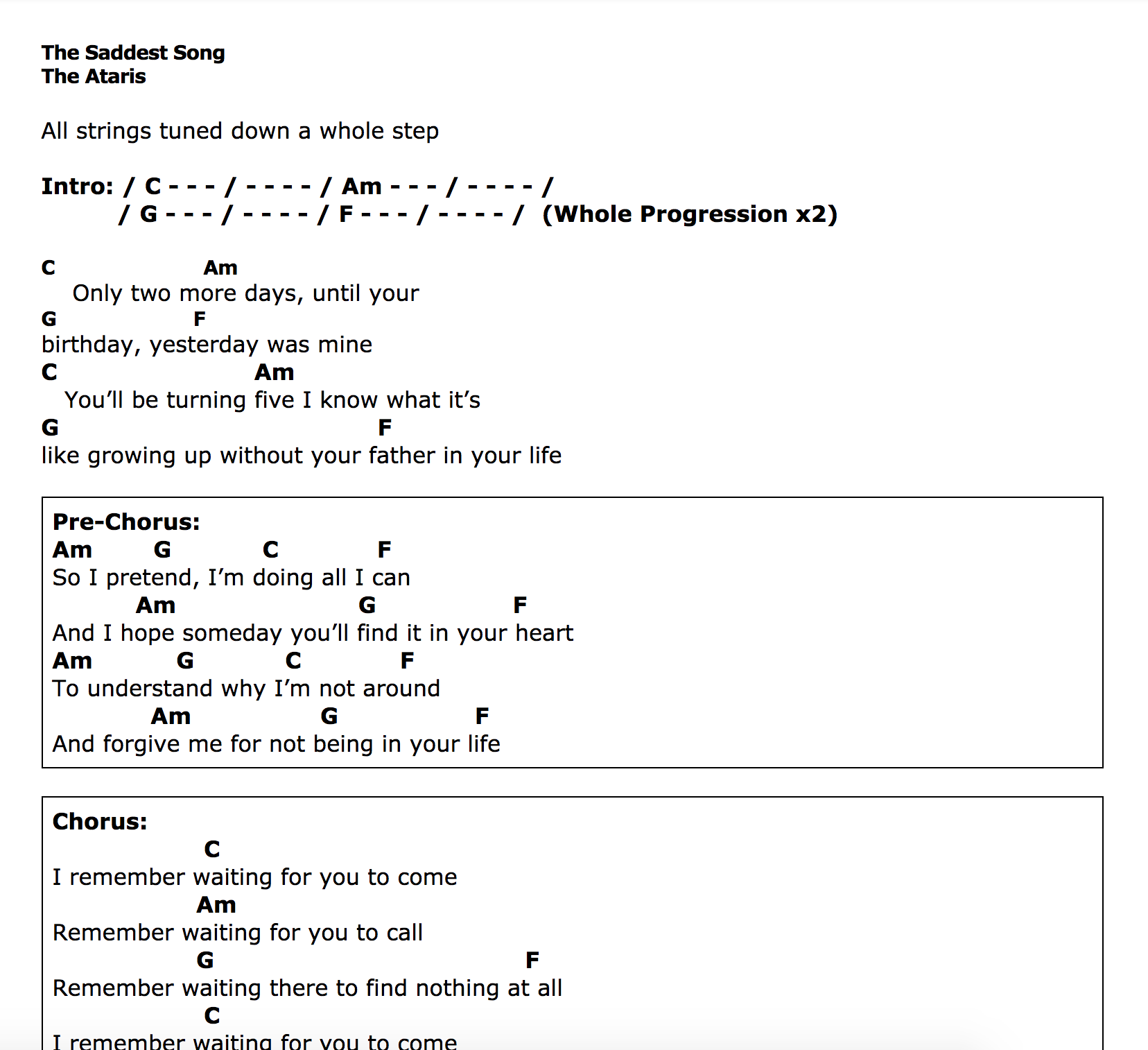 However, when I tried to record the chord progression on the guitar, I felt it didn’t bring out the idea of Melancholy enough, and did not allow me to “imagine” any landscape visually based on the few chord plucking I did.

So, I decided to go back to the digital method. Now that I had an idea of how “Melancholic” music sounded like, with low timbres, echos, occasional high pitched rings, it was time to start experimenting. Using Garageband, I discovered an interface that allowed for me to create soundscapes with the synthesizer option. I played around with the digital keyboard, and this was what I came up with:

Initially I wasn’t sure if I wanted to include recorded noise such as nature sounds to “place” the soundscape such as the waves heard in Soundscape 2, but I after listening to both tracks on repeat, I liked the more abstract, ringing tones from the first soundscape. Taking that, I re-did the soundscape, experimenting with the different ways I could order / press the keys on the digital piano keyboard to emit the most melancholic sound. 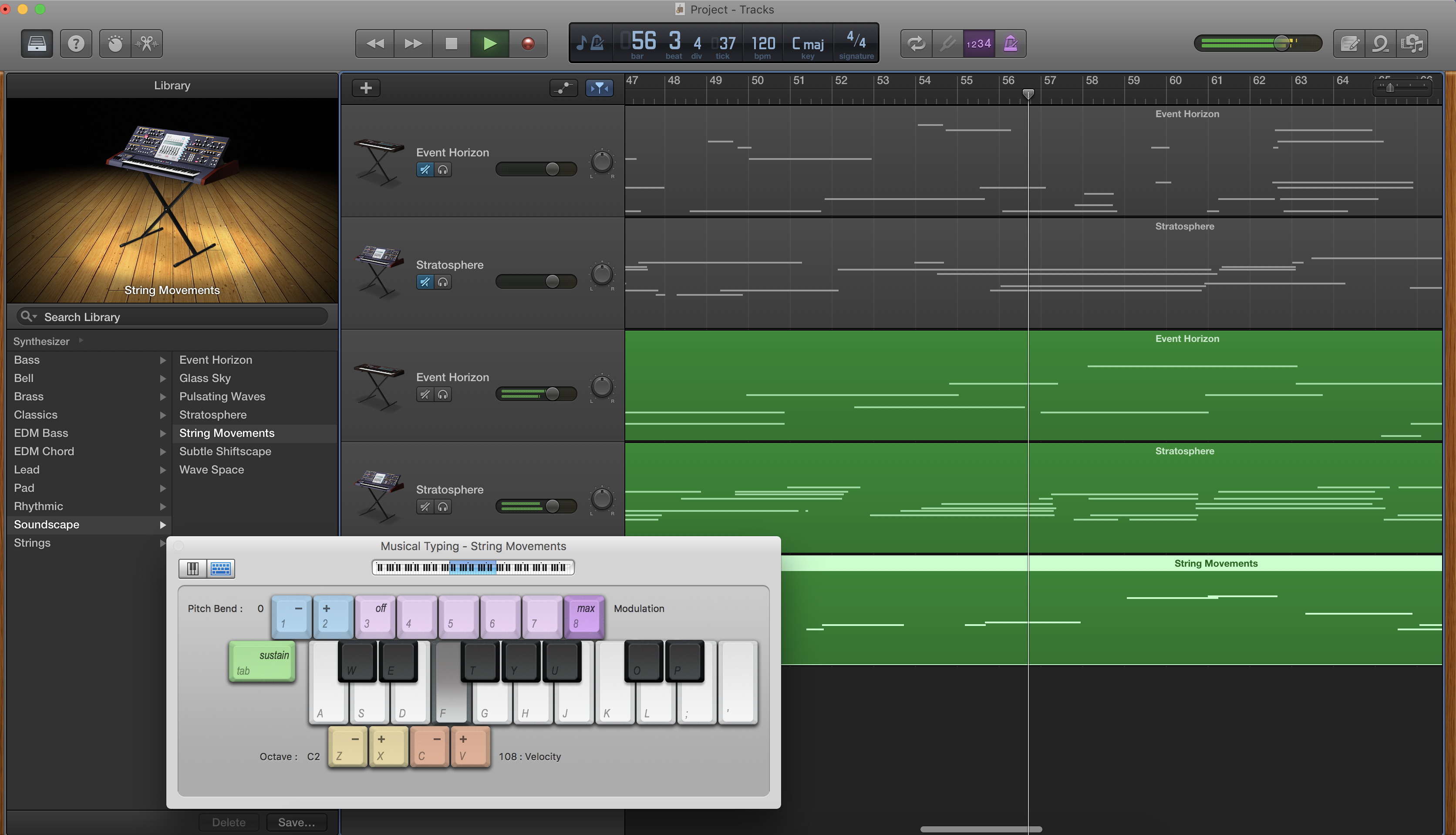 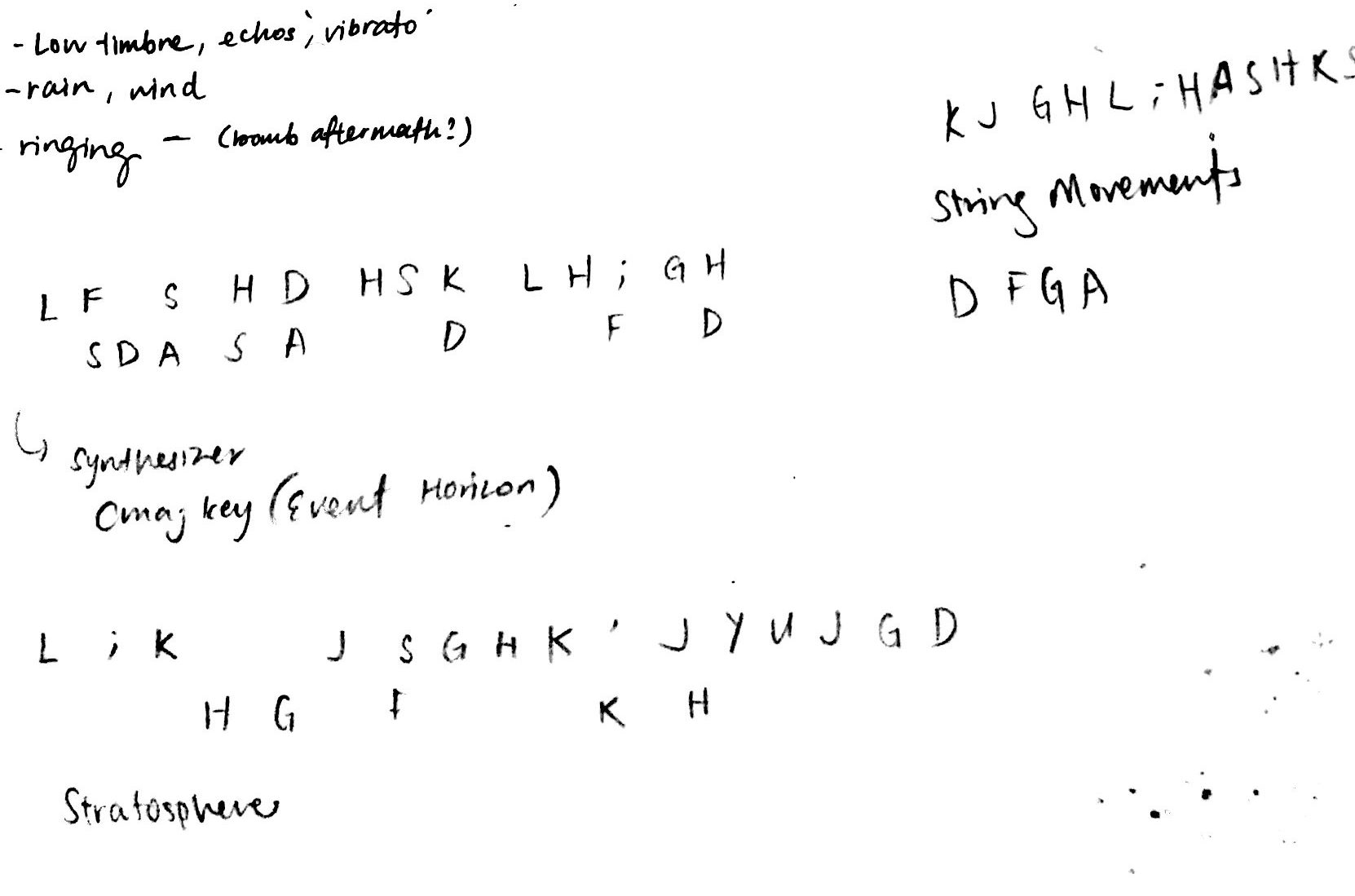 Order of keys on keyboard corresponding to digital piano keyboard

It was then while browsing through my snapchat stories, that I chanced across an article / story of the war in Syria. After listening to the accounts of the various victims (children especially), I felt it would be the perfect story and landscape for my soundscape. I then searched for war cries, screams, groans on freesound.org, but because I still wanted to retain the psychological, abstract feel of the soundscape, I only chose the bare minimum number of sound effects I needed to ‘place’ the audience – in this case, groans and crying – and lowered the volume of these sound effects so that it was more muffled, and almost inaudible.

Hence, my soundscape is titled “Aftermath”, in which the soundscape is representative of one’s psychological state of mind after fighting a war, whereby as they look upon the battlefield, cries of victims, groans of pain, and the ringing of bombs would come back to haunt them. The track ends with a high pitched ringing sound as an imitation of the ringing in one’s ear after a bomb has gone off their them. 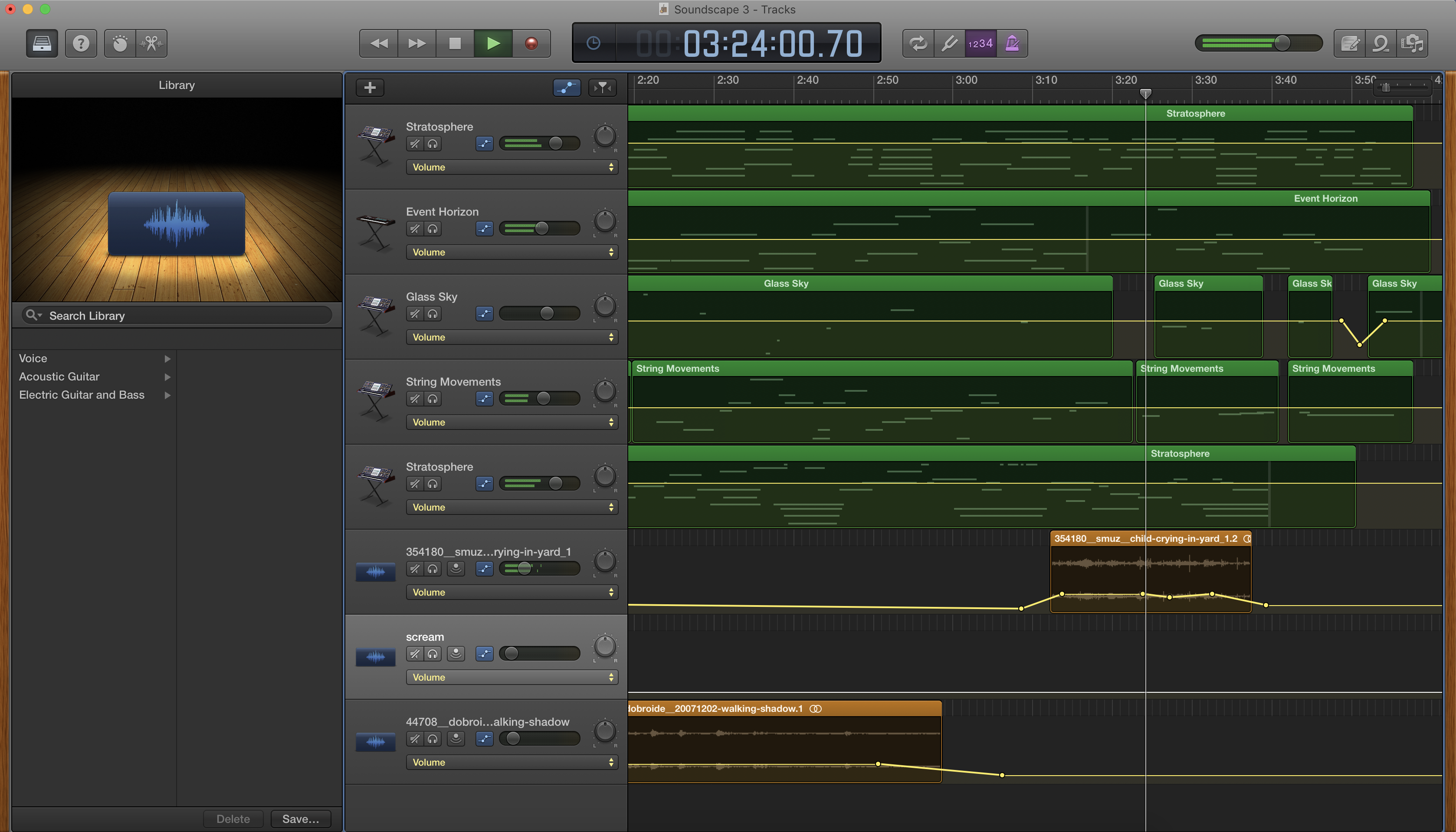 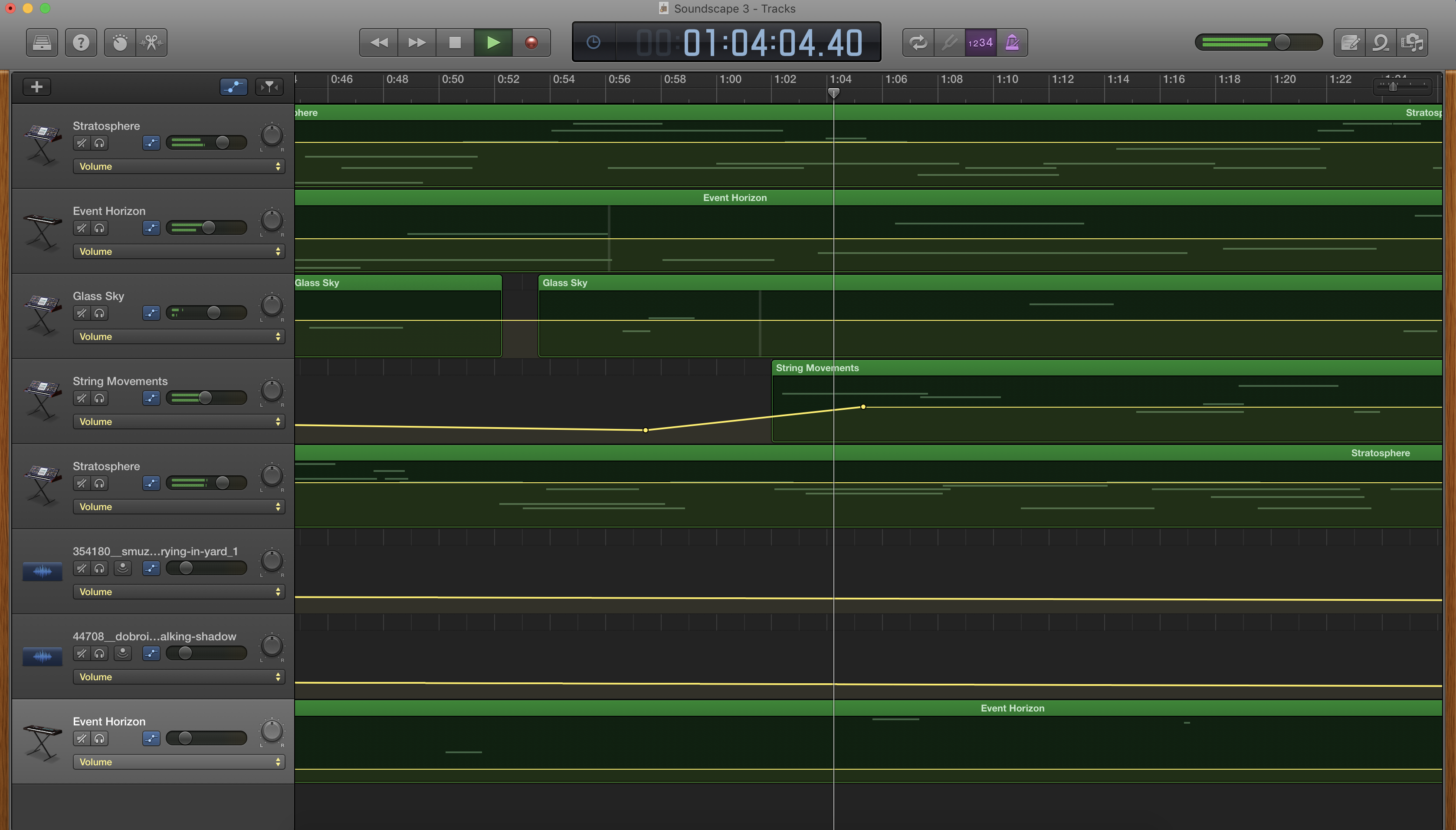 The idea was also for the audience to think about whether they really heard the sounds of groans and cries, because as I listened to the track when put together, I realised the high-pitched ringing sounds and reverbs from the low timbre sounds would lead me to think that the groans and cries were repeating itself throughout the soundtrack, while in actuality it only lasted for a few seconds. I had hoped this would reinforce the psychological effect of the soundscape, which mimics that of the Syrian refugees.

It was difficult also to decide which parts of the track were necessary or not, because there were so many overlaps of tracks. Initially I had included a woman’s scream, but deleted it after I found it redundant to the track and in a way, too revealing by giving away to the audience immediately that ‘someone was harmed’ in this landscape. I wanted the audience to imagine the aftermath of a warzone, with the groans and baby’s cries in the later part of the track to reveal more.

So this is my final track, I hope you found it interesting 🙂