Woooo its our last project! The brief given to us was definitely challenging, requiring us to experiment with video, sound and body for a site-specific performance or installation that would evoke a response from the audience. Moreover, it had to be a development from one of our previous projects, which would be quite a challenge since we would need to source out the main theme of our work (either Alter Ego or Soundscape) and work with that for this project.

– Designed to transform perception of space

– Can be temporary or permanent

Since I felt video was the medium that could incorporate both performance and sound, I decided to research on video installation art.

What is video installation art?

Video art is the idea of combining video with installation, making use of the surrounding environment the installation is placed to evoke a response from the audience. This includes videos shown on small screens through a technological entity (phone, television etc.) or a large projection onto a 3D or 2D sculpture.

It was first birthed in the 1970s by Nam June Paik – known as the Father of Video Art. His first major exhibition comprised of multiple television monitors arranged in a sculptural manner, where distorted recorded images of music and sounds of mechanical objects were played on the screens. 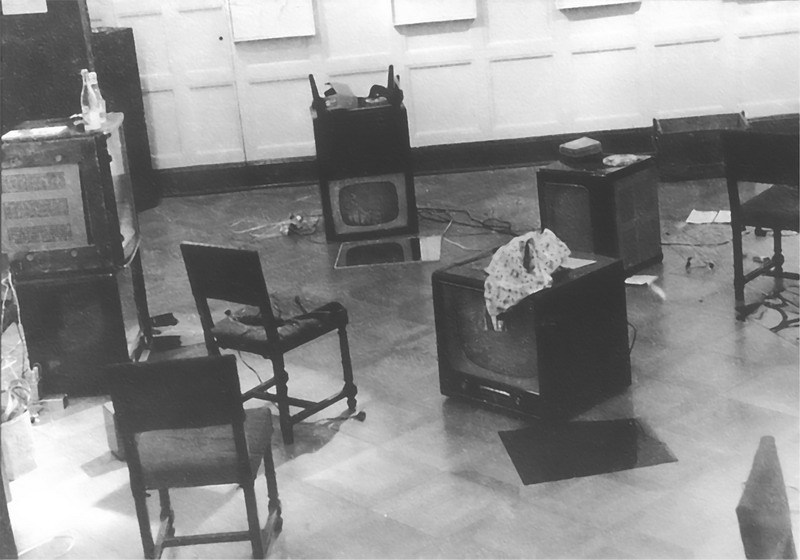 Over time, video installation has become a popular medium used by artists as technology becomes increasingly accessible. One of the main aspects used by artists is the incorporation of space as a key element in the narrative structure of their works. This helps to create an immersive ambience where audiences may play an active role in creating a narrative sequence by moving around in the space.

One of the artists I came across was Sonia Falcone, whose work “Windows of a Soul” (2010) caught my attention. It was a video installation shown at the Biennale in Santa Cruz Bolivia.

When I first watched the video, the first thing I noticed was how the colourful visuals and sound worked together to create a sensory experience, whereby both were necessary in creating an immersive environment. Together with the darkness of the room, I felt like I was being drawn into the visuals (and towards the panels) despite not even being in the space. Falcone’s work explores the concept of human spirituality, whereby the video installation was made out of thin, vertical blocks that were six meters in height and aligned in an uneven manner. On the blocks, she projected videos of short, colourful components, each representing one part of her personal life. The visuals created was of an artificial and natural scenery that stressed the importance and unity of both in human existence. In doing so, she wanted to send a message of hope for a better future, whereby “Living is beautiful, from the moment of conception throughout everything man does and feels in his lifetime“.

Another artist I came across was Sonja Hinrichsen’s ‘Three Gorges‘. Her work consists of an immersive video installation with 4 projections, each showing videos of footage of the famous Three Gorges of the Yangzi River in China. It documents how the natural environment has been altered by Man, such as the building of the Yangzi River Dam that has caused a significant rise in water level – in turn causing numerous environmental problems such as flooding.

The installation was placed in a darkened room (in the Organhaus Gallery, China), where the only sounds to be heard are the hum of a ship’s engine. The viewer is surrounded by the canyons around the Yang Tze River, projected on 3 sides of the room. The footage by Hinrichsen was shot during trips up and down the river, and stitched together to create a ‘surreal world’ where viewers could choose to sit or stand within the installation space, simulating being on board a “ship” and cruise through the 4 rivers simultaneously. Hinrichsen made sure to place the video projectors in a way where the viewer’s shadow would be cast along the wall and into the piece several times, changing the role of the audience from a viewer to a player (within the installation).

Hinrichsen’s work comments on the relationship between human intervention and nature, questioning Man’s feeling of self-righteousness to change nature as they please, and what might be left of such a landscape in the future should it continue. exploring the verge between real reality and virtual reality to create an exaggerated super-nature that is entirely removed from real reality through her installation.

“Will we turn around and decide to protect and preserve what is left of original landscape[s]? … Or might natural environments vanish altogether sometime in the not-so-far future, as a result of our growing needs for space and resources? Will they continue their existence only as a memory that can be experienced solely in a virtual world?” – Sonja Hinrichsen

Finally, the last artist I chanced upon was Paul Gaudefroy, and his work titled “Litote and Hyperbole” (2009).  This installation was quite interesting, whereby thin vertical strips of cloth were placed side by side to create a curtain like structure consisting of 4 sides, upon which images of different women’s heads turning would be projected on. The installation is also located in an outdoor environment surrounded by trees, and performed at night. Viewers are able to walk through in and out of the installation as well.

According to his website, this work was part of a project that researched the concept of manipulated imagery, elevating the status of images from ‘images’ to ‘icons’. It focuses on the idea of a portrait. However, since the website was mostly in French, I couldn’t really understand what the concept of the piece was. Even so, I found the fact that it was located outside was an interesting aspect itself, as natural elements such as the wind would cause the strips of cloth to move and shift, distorting the image projected on it. There is also a serene, calm music played in the background as viewers watch the portraits of different women slowly turn. At some points, the women would turn to face one another, before turning away. In Literature, a litote referred to an ironic understatement in which positive affirmation is expressed through the negative of its contrary (e.g. I shan’t be sorry for I shall be glad). A little bit like a double negative (which gives a positive). A hyperbole refers to exaggerated statements or claims not to be taken literally – the opposite of understatement. In a sense, the title itself presents a juxtaposition, and is even more confusing since the video projections do not include text. Audiences then have to make sense of the piece by interacting and moving through it, observing the portrait (and expression) as the women turn, and of the installation’s title.

All in all, the artists I’ve researched on were very much aware of the space their installation was placed in, and how they wanted the audience to view it – be it through interaction or intended involvement. They made sure the elements of the environment and surface of video projection would contribute to their message and intention, that would urge audiences to question the meaning behind the works in relation to the visual presented and the space they were in.