Project 2: Sequentially – Impossibilities of Being – No Dreams

This is the final sequence of 90 images for this project titled “No Dreams”. The reason for this is because when I sleep, I never get dreams – only nightmares.

One of my most prominent nightmares is me getting chased by Red Indians – usually the Indian Chief. The nightmare always begins with me in my bed about to fall asleep, when suddenly the wall of my room will roll up like a projector screen and I would see my mother and sister running away from something on a forest path. I will then see a group of Red Indians chasing them soon after, following which I would quickly attempt to hide myself under my blanket or under the bed. But no matter how much I try to hide, I will always be found by the Indian Chief in the form of him lifting up the blanket very slowly before attempting to kill me with his tomahawk.

Because this is one of the more prominent nightmares I have had since I was 4, I decided to re-enact it for this project in an attempt to share with others the intensity and fear I experience during this nightmare. Since the entirety of the nightmare was of me running away from the pursuing Indian Chief (endless chase), I had to find a way to end the nightmare for the sequence of 90 images. I hence came up with the idea to combine this nightmare with another memorable nightmare I had of me trapped in a lift. Since I have mild claustrophobia, this only served to intensify the fear I felt. The challenge for me for this project was hence how successfully I could convey to others the same extent of fear I experience in my nightmares.

This is my brainstorming process and initial storyboard: 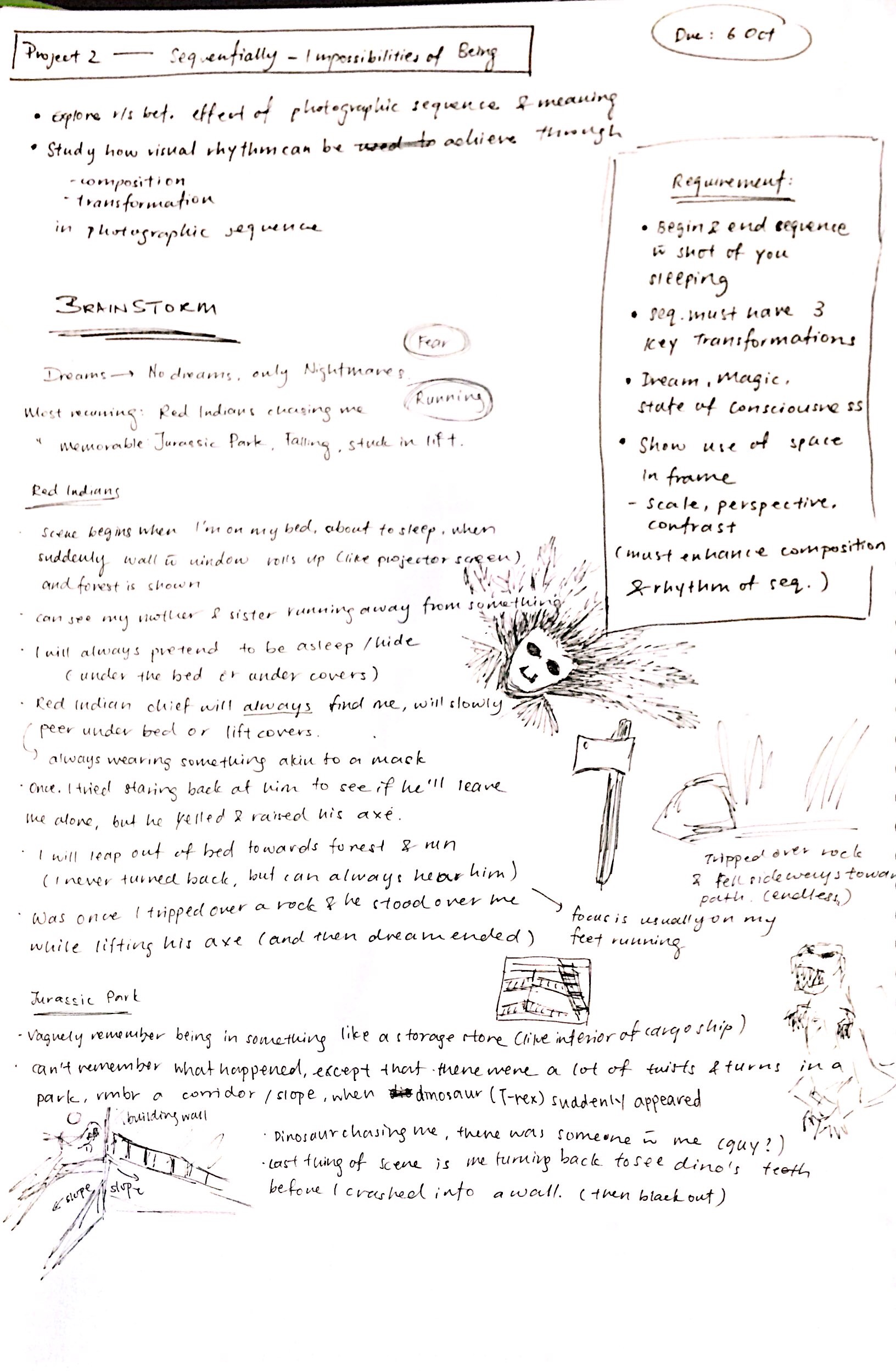 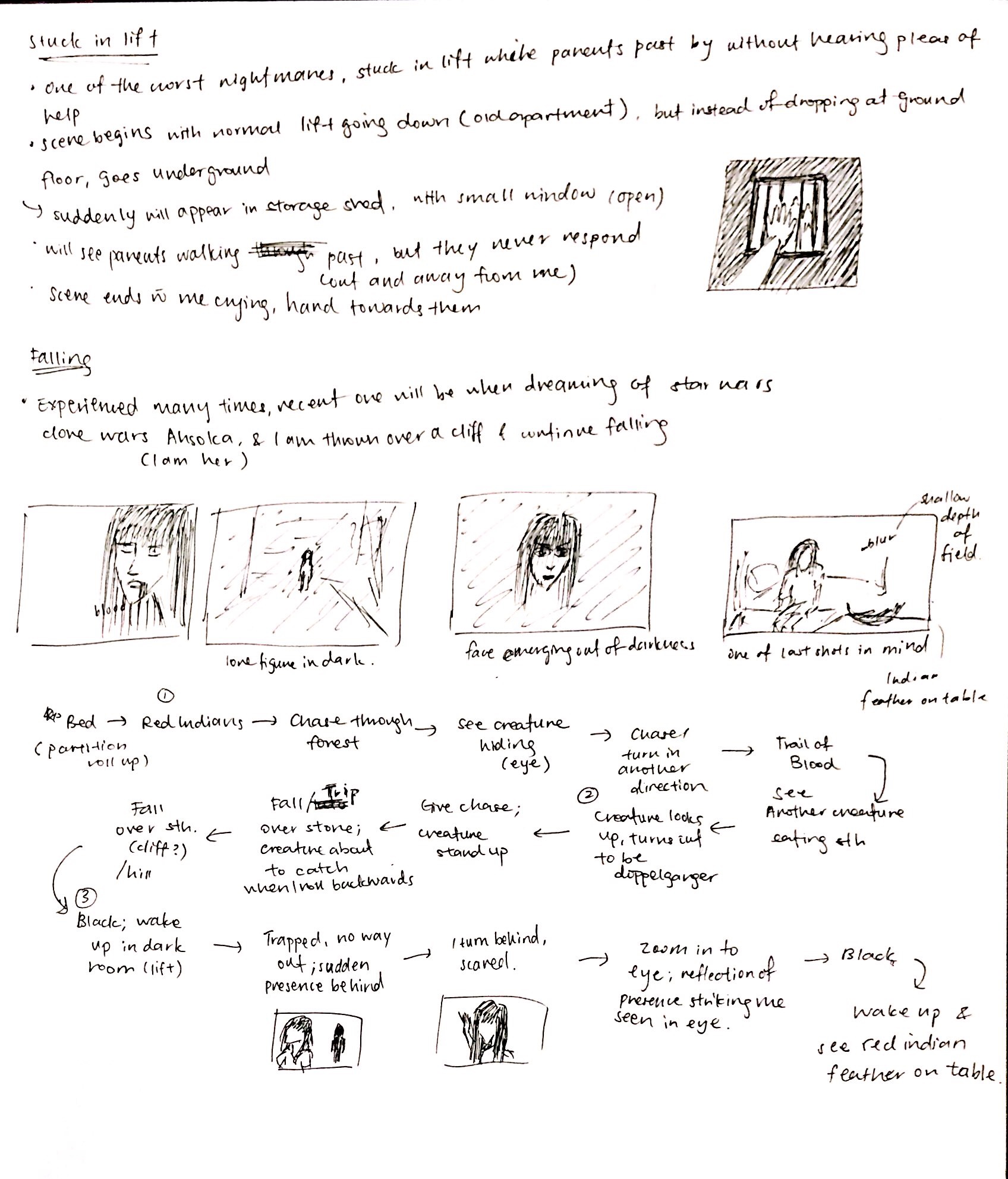 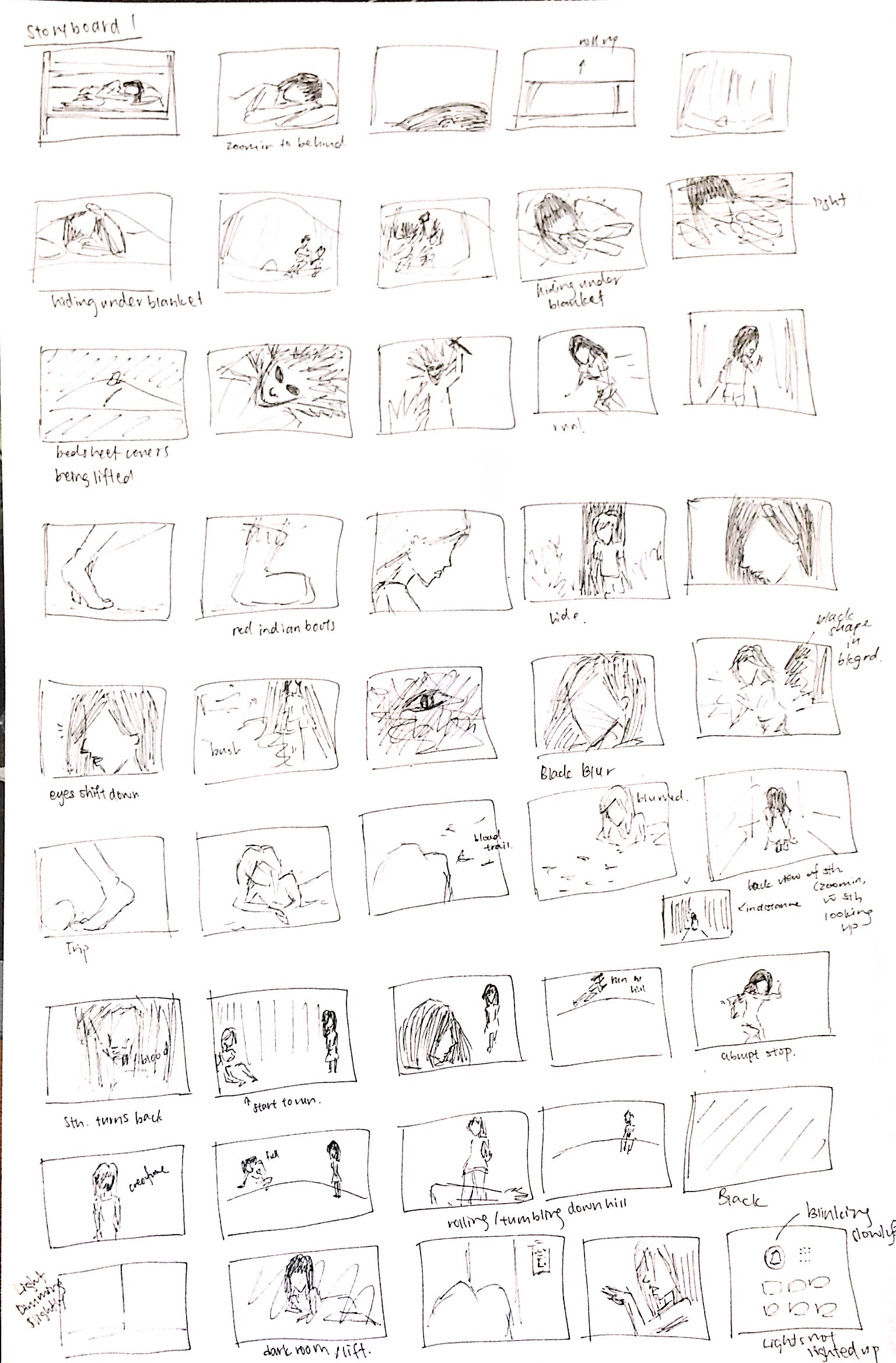 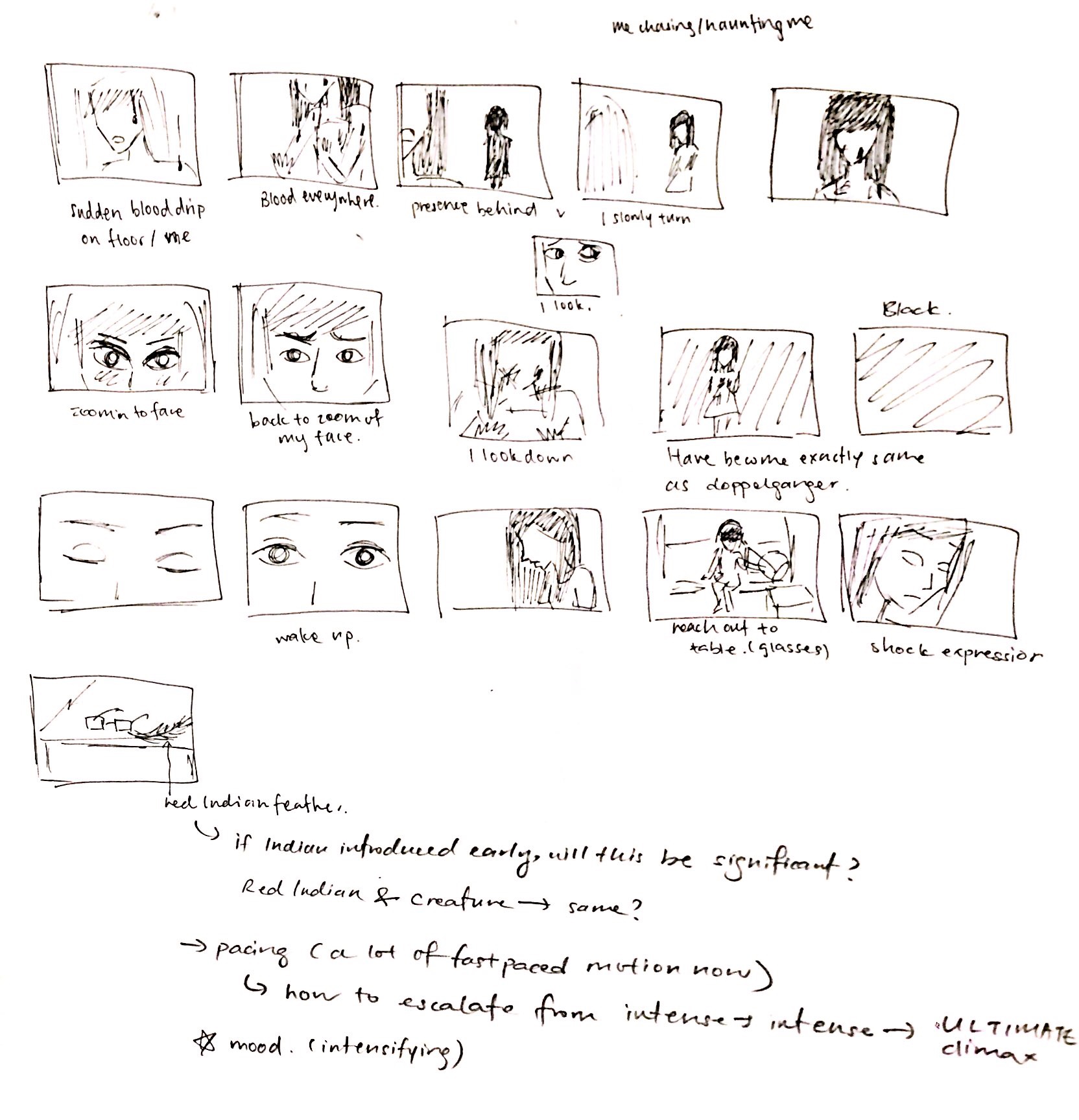 Some comments about my storyboard after consultation:

In addition to the comments above, I also had to think of a way to show myself going through 3 transformations. Since it was a chase sequence, I felt perhaps I could show 2 “transformations” through the various extents of fear I feel throughout the chase sequence, such as when I’m trying to escape from the pursuer (Indian Chief or Doppelgänger) and the suspense when I’m hiding from them. The last transformation will then come in the form of me becoming my own nightmarish Doppelgänger in the last few images to suggest how my fear contributes to the experience of a nightmare. 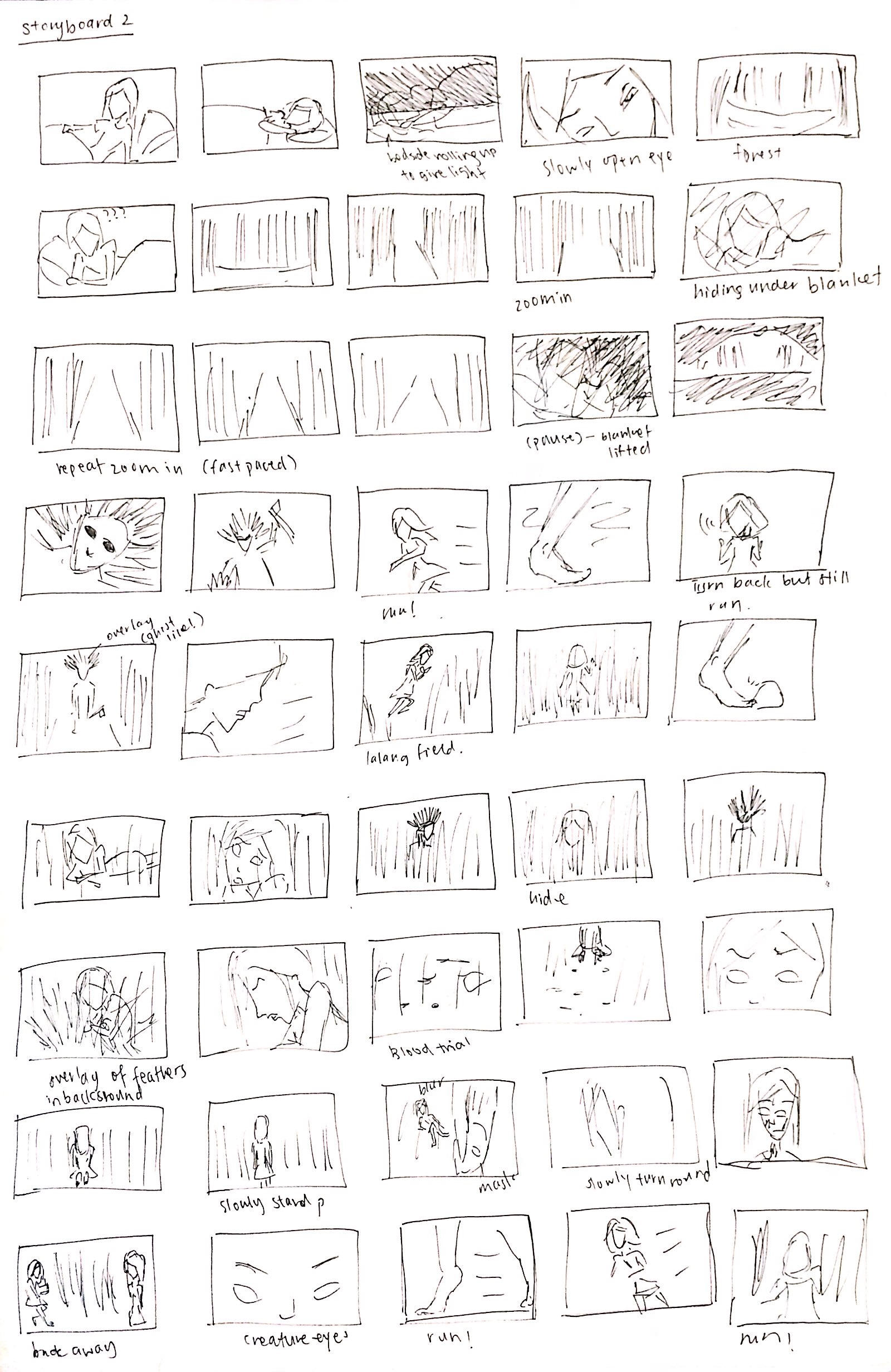 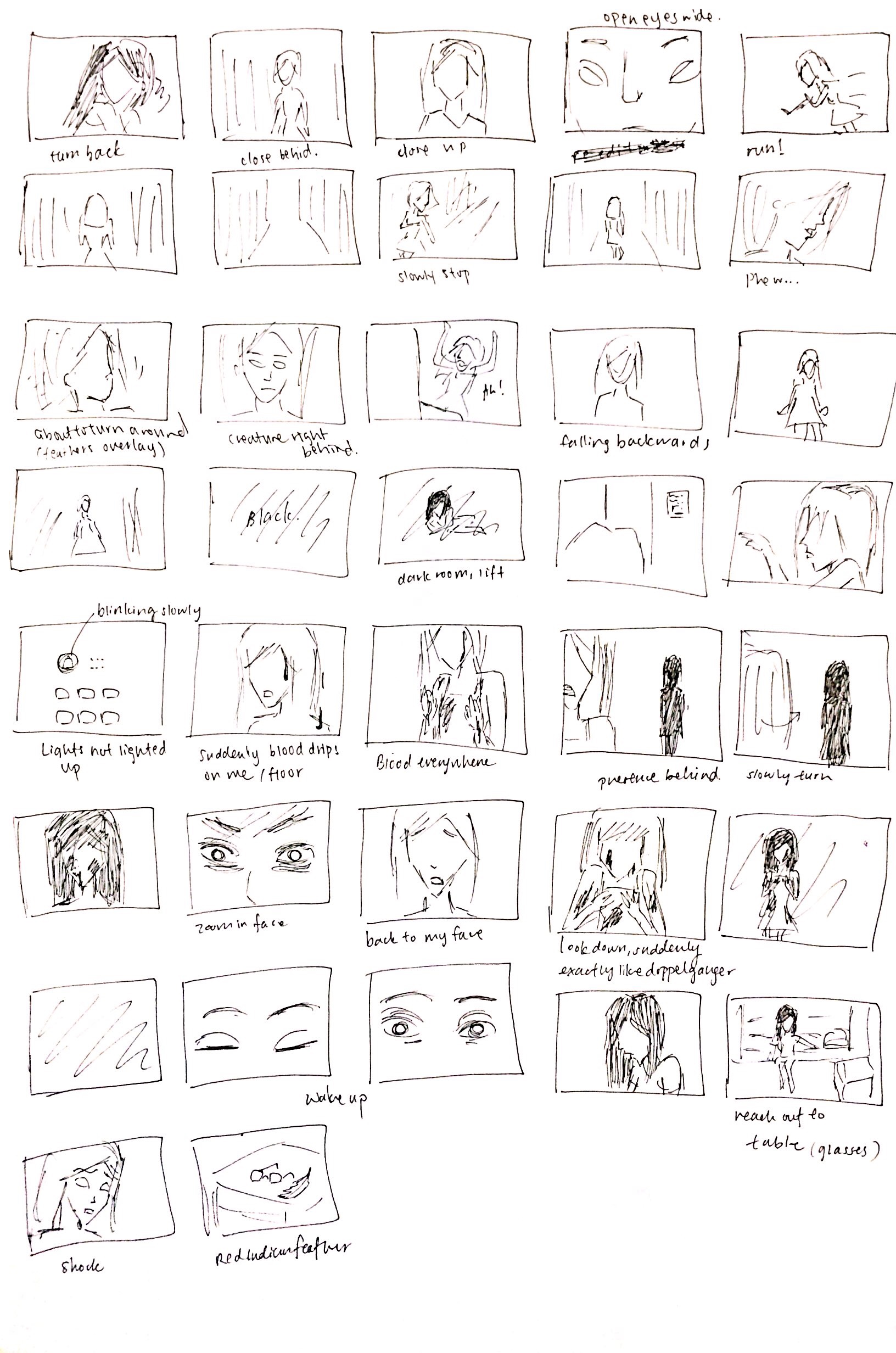 After storyboarding, it was time for the shoot itself! I used a Sony Camera Nex-3 and shot at Punggol Waterway Park (the Lalang Field area) and my condominium’s function room. Here are some behind-the-scenes footage! 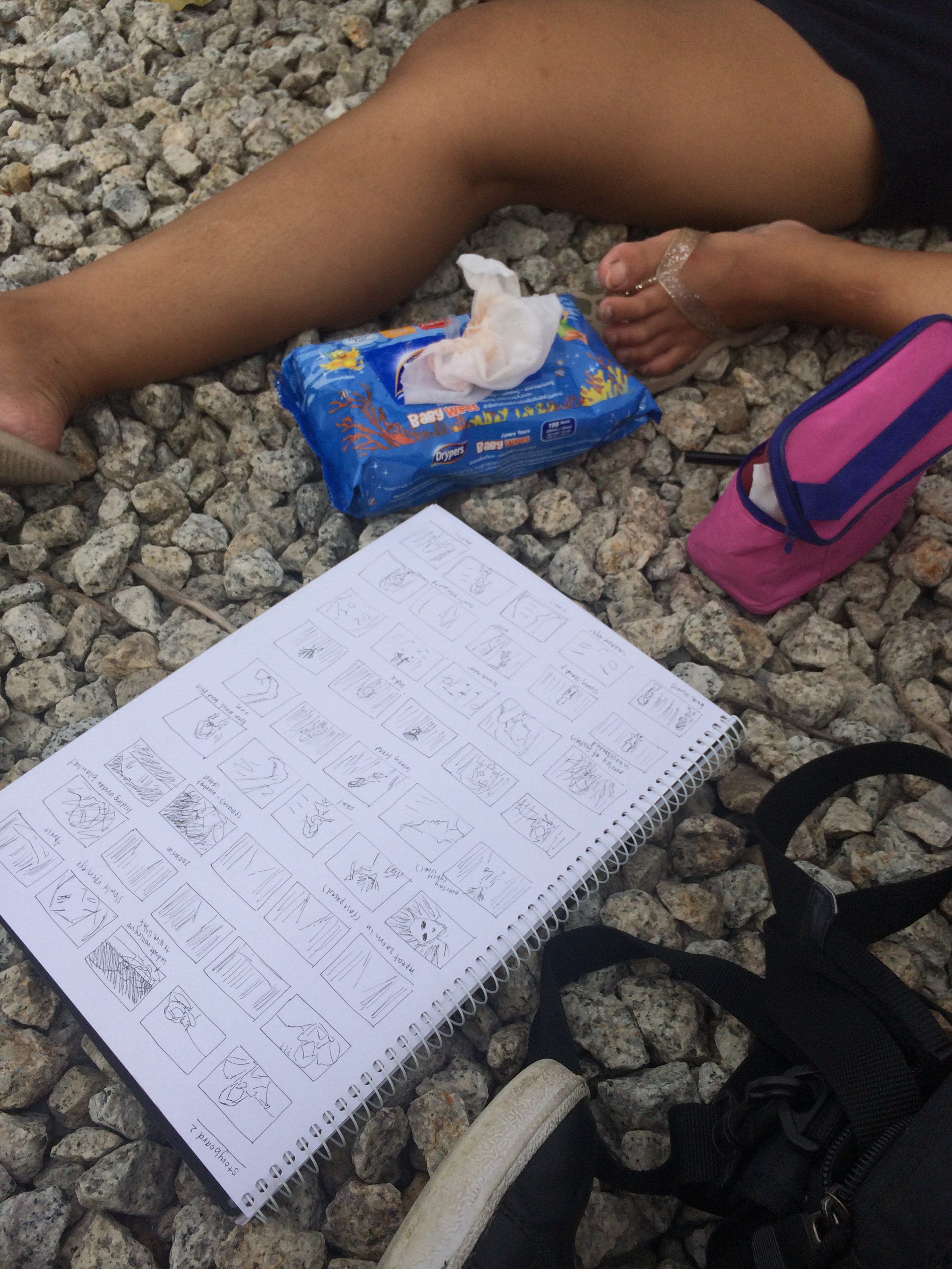 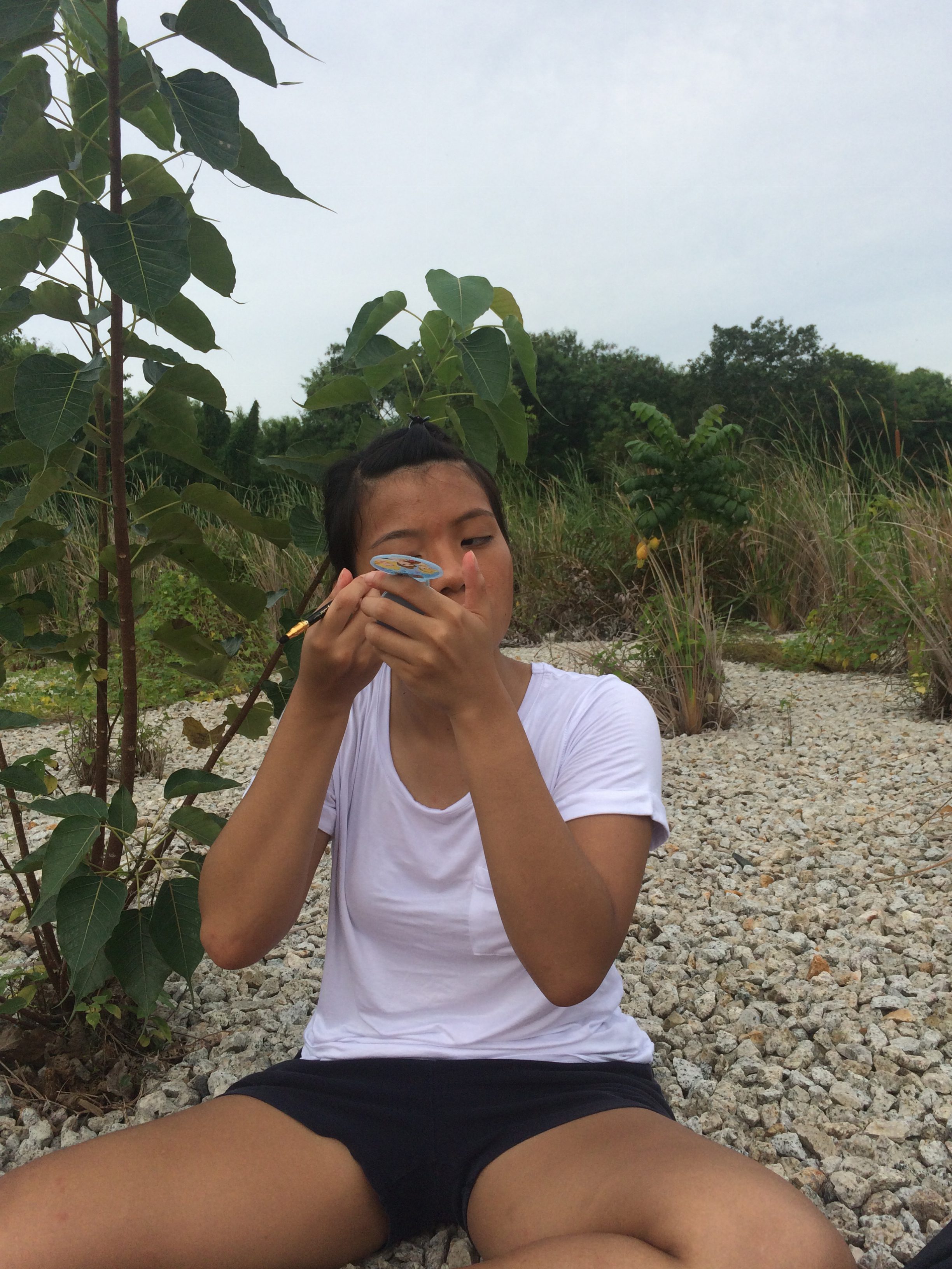 I got the help of one of my good friends to assist me for my forest scenes! 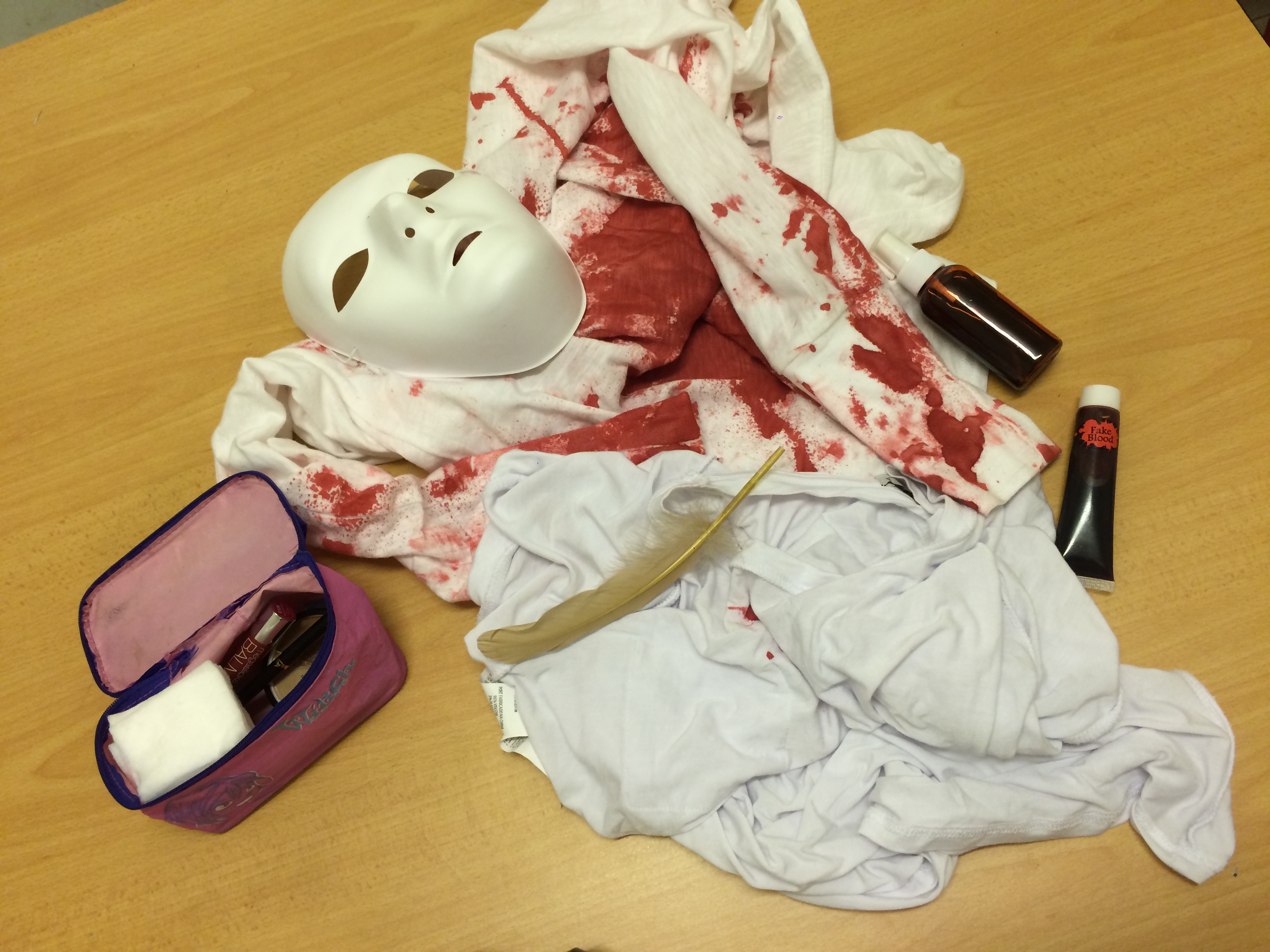 I ended up having about 1310 photos by the end of the entire shoot (both forest and function room scene), which made it extremely challenging to select 90 photos from! 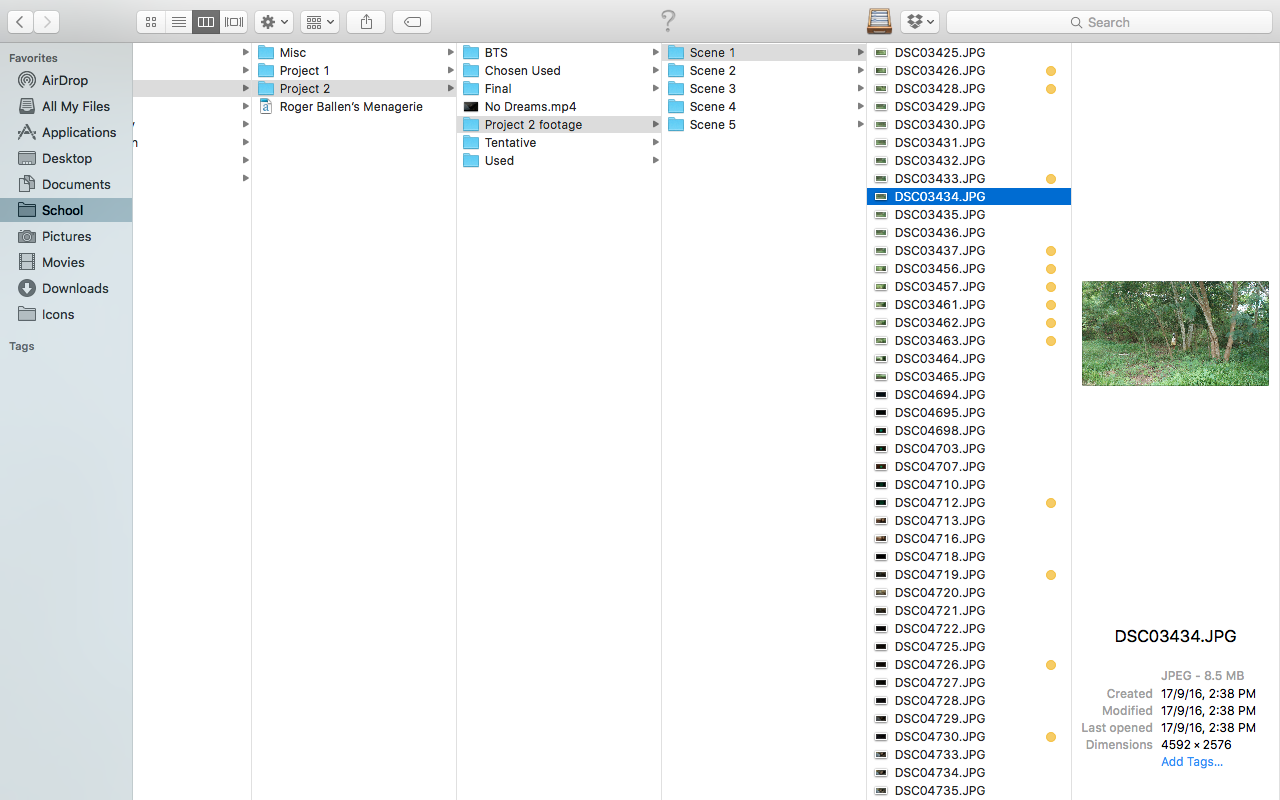 The hardest scene to shoot was probably Scene 4, with Scenes 2 and 3 following close after. For scene 4, it was because I had to ensure I was in a dark room, with the only light source being the light from the window, which was also blocked by a curtain. I had to repeatedly adjust the camera apperture and shutter speed in order to get just the right amount of light in the photo to ‘suggest’ my body in the room. I also had to brighten many of the images in Photoshop in order to actually “view” the pictures taken, as some had no light captured in it at all. As for Scene 2 and 3, it was mainly getting a natural running shot taken (including facial expressions) that was a challenge. Initially, I was also supposed to run barefoot (like how I do in my nightmare). However, the ground proved unforgiving with sharp blades of grass and stones, and so I had to run with my slippers which made some of my running postures all the more unnatural.

In addition to my 1310 photos, I also ended up with 37 mosquito bites and injured feet after the shoot xD 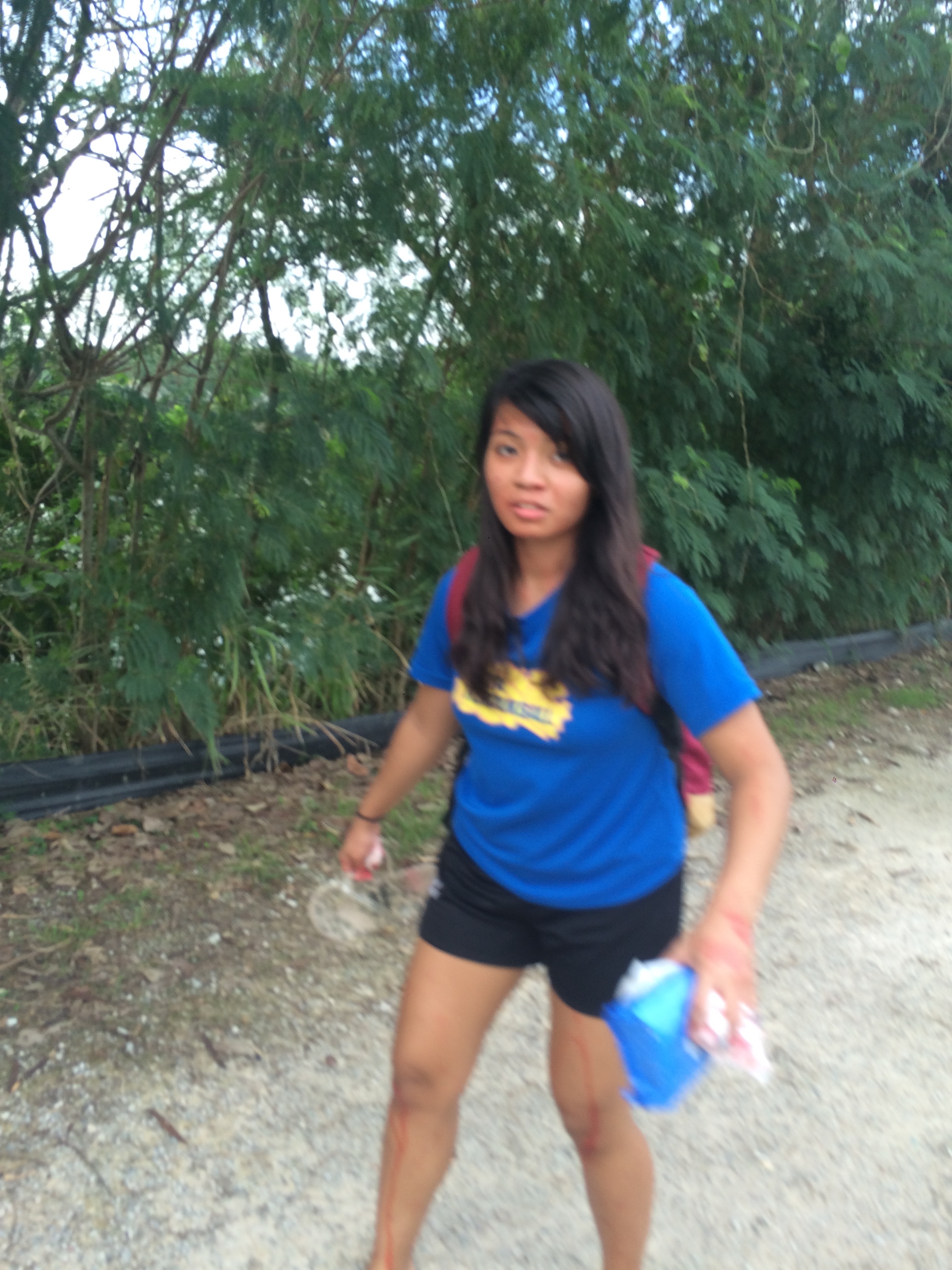 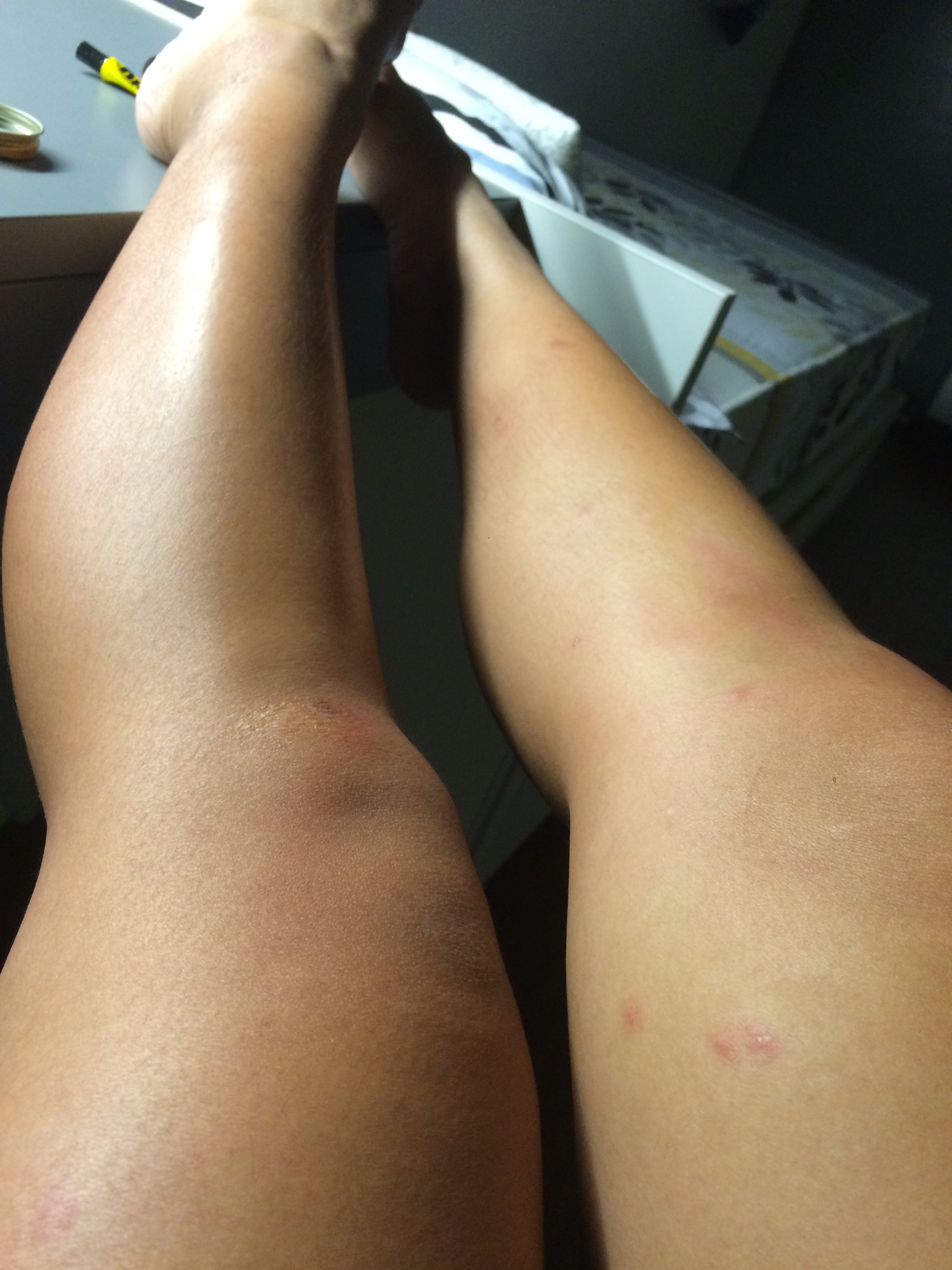 After choosing my 90 images, I tried not to render them too much from its original, as I wanted my images to be a “realistic” depiction of my nightmare – whereby viewers will actually feel they are in the scene itself instead of watching me being chased. Some of the editing functions I used in Photoshop included the clone tool, levels, photo filter (tint), layer masking et cetera.

The process of choosing 90/1300++ photos was definitely challenging, but it definitely taught me how to look for images that I felt accurately depicted the emotion and content I wished to convey. It also taught me how I had to have a concrete picture of the scene in mind while taking the photos, as it would affect the composition and end result of the photograph. This was the same for my decision of how I should sequence my images, as some of the photos I liked differed from the ones in my storyboard.

Thereafter, I decided music could help give my sequence the additional intensity with regards to fear, playing on the assumption that some of my images combined with the music will create anticipation and suspense before giving viewers a ‘jump-scare’. I thus downloaded various clips from freesound.com that were related to ‘horror’, and combined it together with my sequence at different intervals (some overlapping). 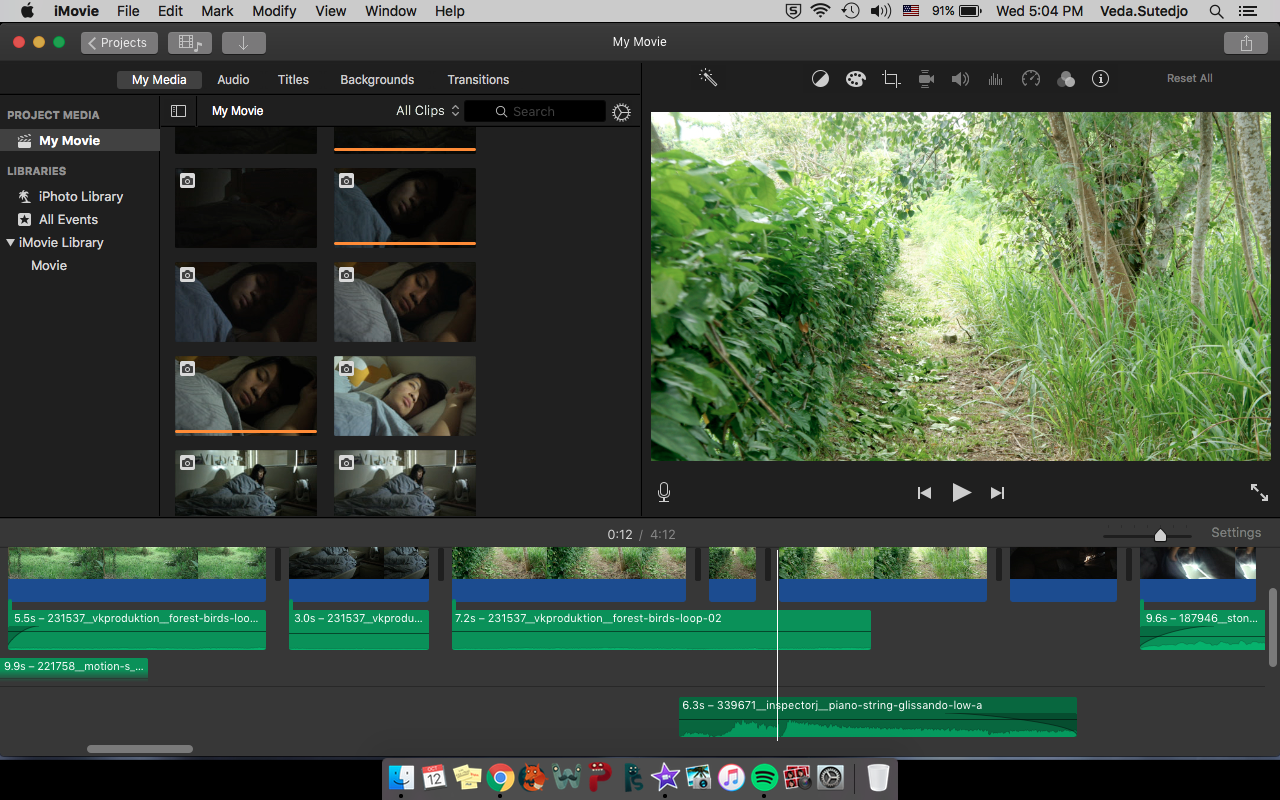 After piecing together the 90 images, with its time ranging from 0.3 seconds to 6 seconds, together with the music, I was finally done with my sequence!  In all honesty, I have not managed to go through watching my entire sequence because I was afraid of it myself xD (apart from the editing process at different intervals of course).

But here’s my final work, and I hope I managed to successfully share the intensity and extent of fear I experienced in my nightmares!