Finally we have come to our final project for 4D! Upon receiving our project brief, my group (Jia Man, Danielle, Amadea and myself) went ahead to brainstorm for ideas we could use – mainly the genre and type of story we would make into a film. Amongst folklores, movies and fairytales, we decided to do a modern twist on Hans Christian Andersen’s story of ‘The Little Mermaid’ as we felt it would be an interesting challenge to create a story revolving around a protagonist who lives in a completely different world from ours. 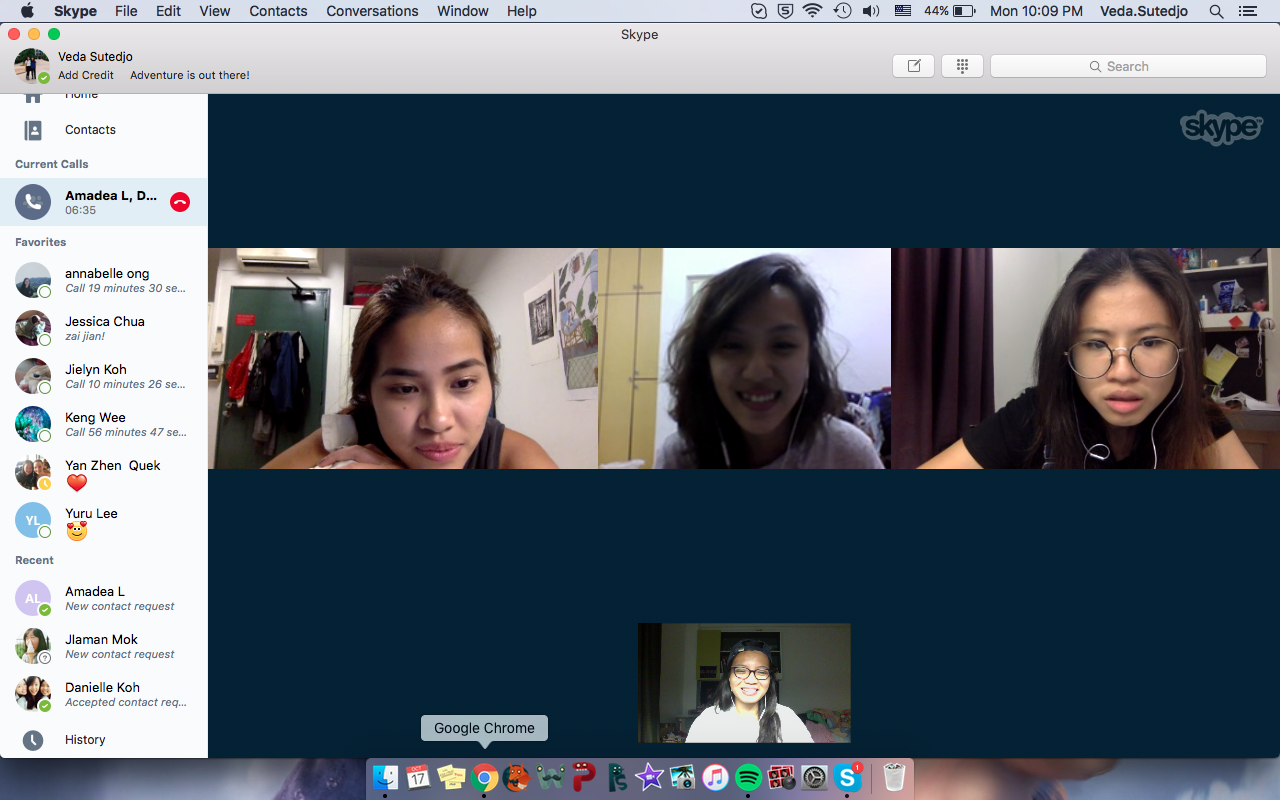 And so after picking out the main plot points in the story of ‘The Little Mermaid’ and analysing it, we were quite interested in the idea of Ariel giving up her identity as a mermaid to become a human in order to be with the man she loves. The idea of sacrificing everything she was and what she knew of her life for someone was something we found to be very impactful. Thereafter, we watched quite a few movie trailers to get ideas for our cinematography and mood for our film, and we chanced upon “Catch Me if you Can”, a story about a highschool boy who goes around acting as different occupations in order to gain experiences he cannot get at his age.

Thus, our story revolves around a female protagonist, Ariel, who is a professional swindler. She enjoys doing what she does, especially the money she earns from it, until she meets Jay during one of her “occupations”. Initially, she thought she could get money out of him, but the more time she spent with him the more she started to question the whole nature of her job and her own identity – because since she has acted as so many identities, she doesn’t know who she really is anymore.

We actually struggled quite a bit to finalise our storyline, because we all had different interpretations of the story and differing opinions on how it should flow. However, after coming to a consensus and finalising our storyline, we could finally start on our storyboard and filming schedule. Because we were getting another friend to be in our film as the male lead, we had to keep his schedule and free days in mind so as to lessen the amount of time he would have to spend on our project. 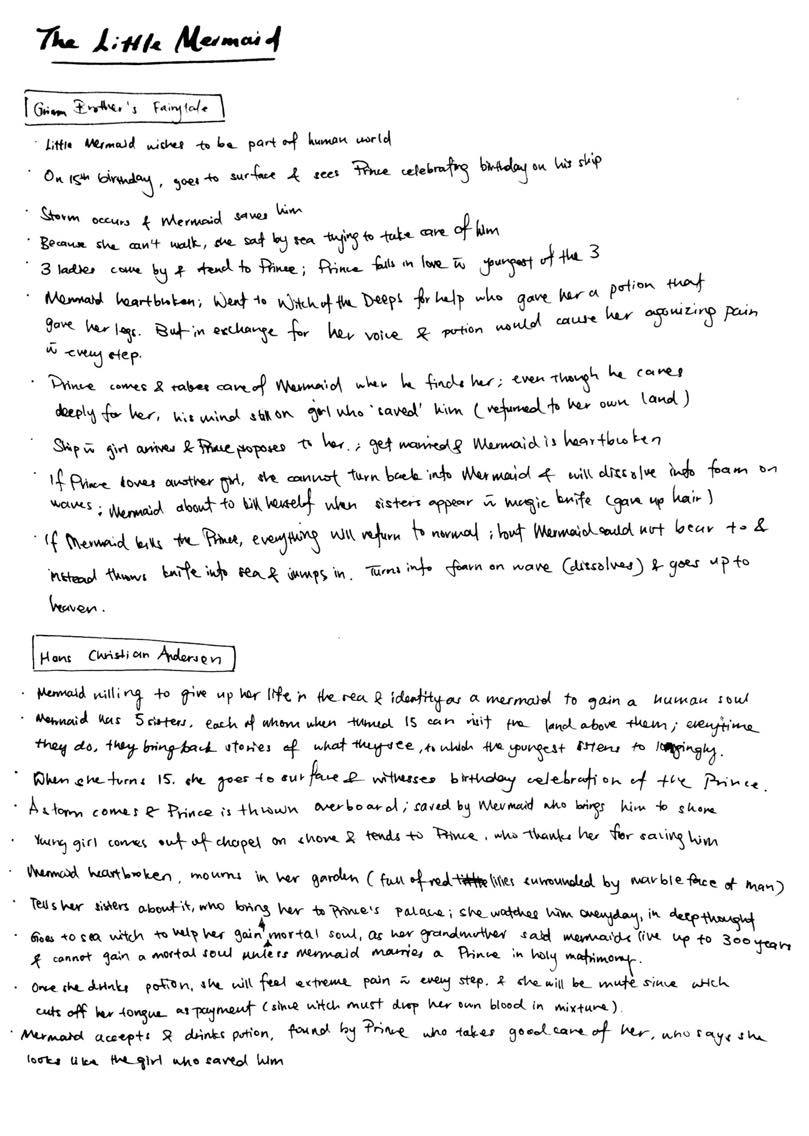 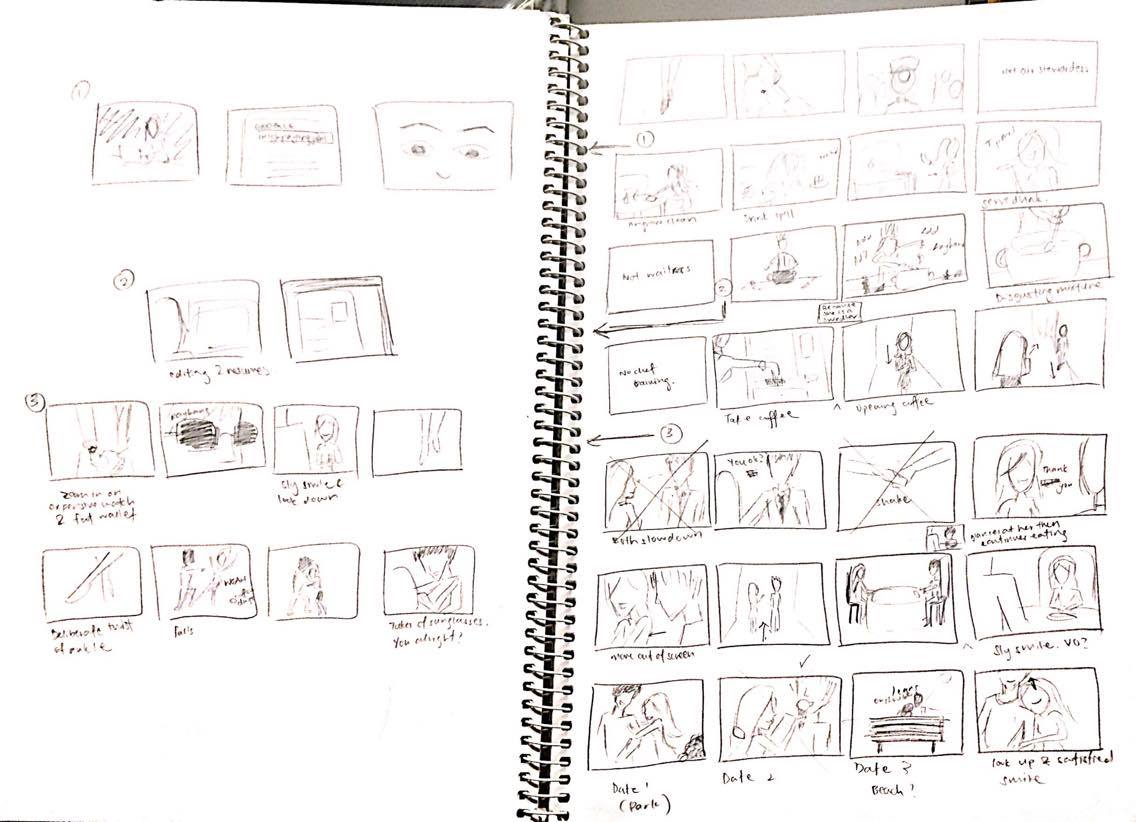 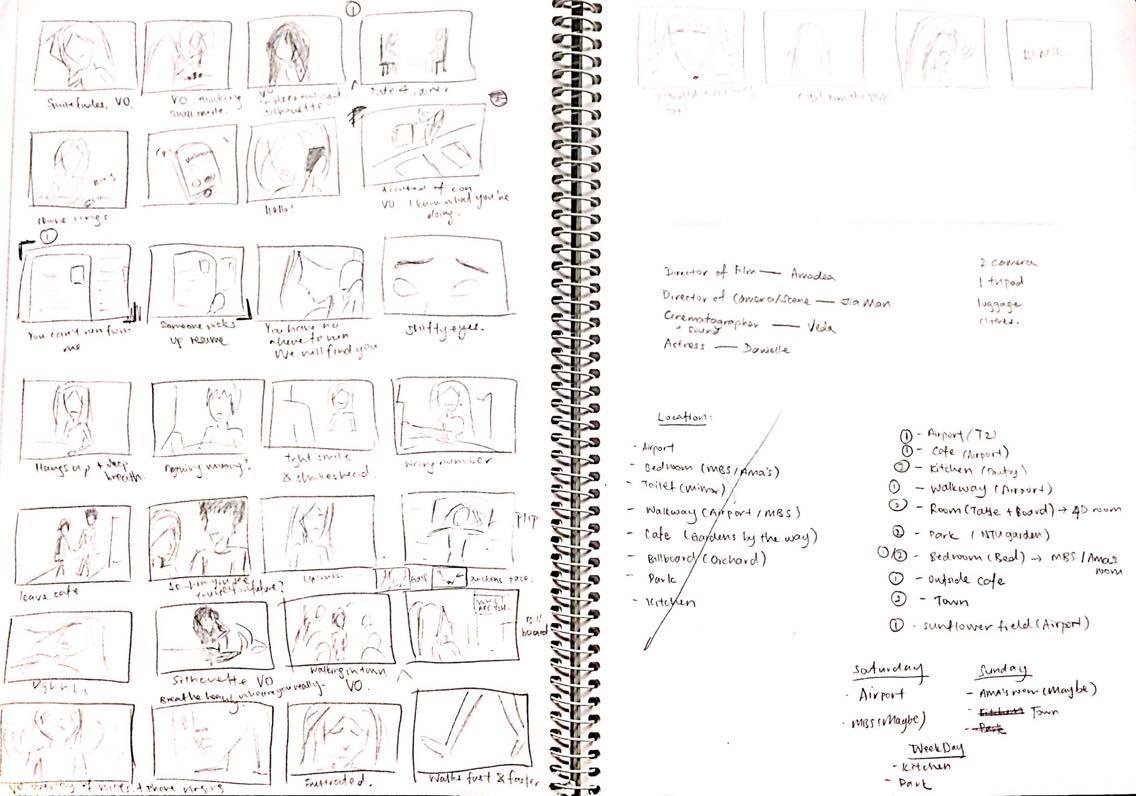 We also included a mood board made out of different images of various films (from vimeo) to gain inspiration and an idea of the flow of our story. 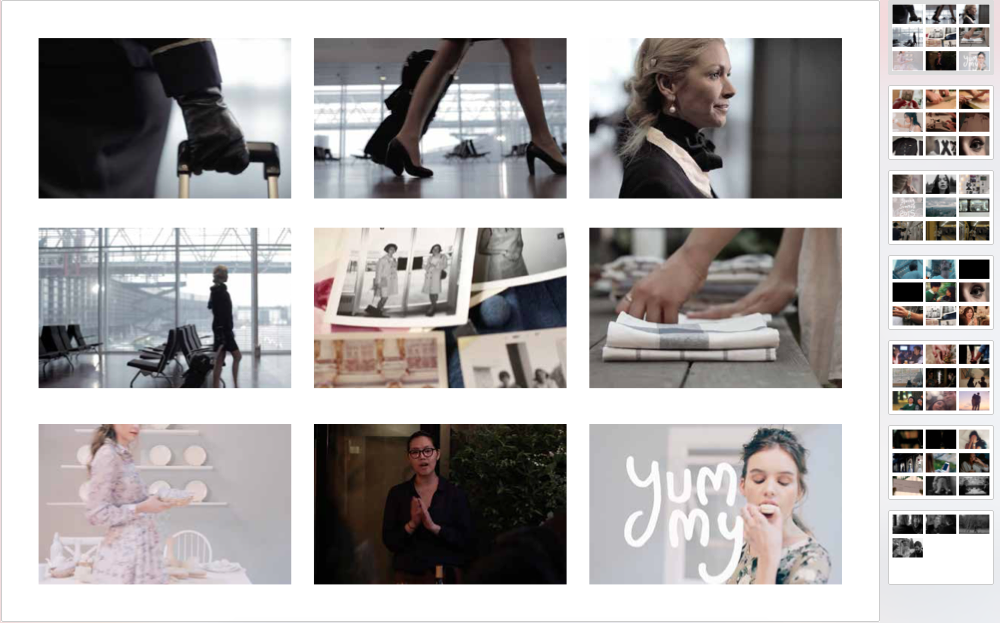 And of course we also had a script for our main leads to follow (Danielle and Jay). 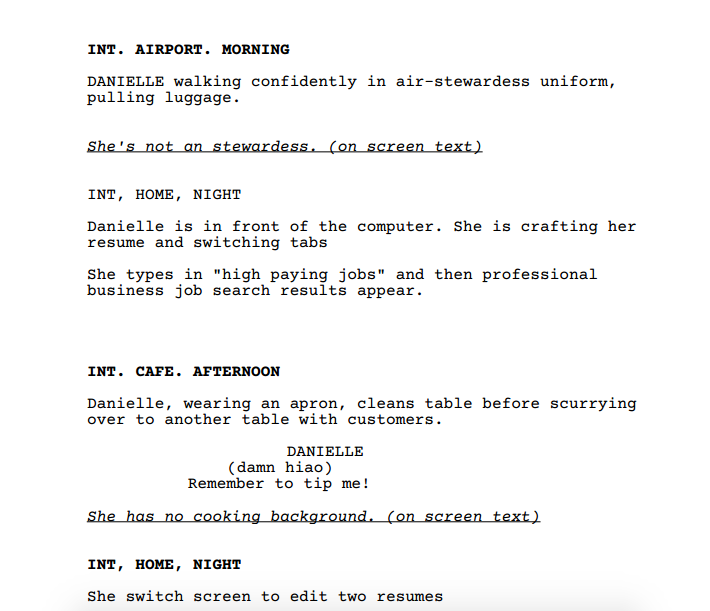 As for filming, it was a thoroughly tedious process since our film involved several places such as the airport, various cafes, a kitchen, a bedroom etc. We had to think of what kind of shots we wanted (close up, extreme long, medium shots) and which would fit the scene, as well as the mood. It was quite important to remember to change the temperature in the camera settings so that we had a consistent colour mood in our film. Apart from that, we also had to help plan the type of outfits our leads had to wear for the shoot. Roles wise, Danielle was our actress, Amadea was the director, Jia Man was the art director, and I was the cinematographer.

We filmed across a period of 4 days, the first being at the airport and hotel bedroom (we were lucky enough to have a room at hand at MBS – courtesy of Danielle’s friends), where we got a majority of our scenes filmed. It was quite challenging to film because we were depending on only 1 battery, which gave us a limited time to film each scene. And when the battery did run out, we had to run to find a charging point and spend 20-30 minutes staring at the camera while it charges. This did however push us to be more decisive about the type of scenes and shot angles we wanted, which helped when we went to our second filming location at MBS because we had a limited time to use the room. 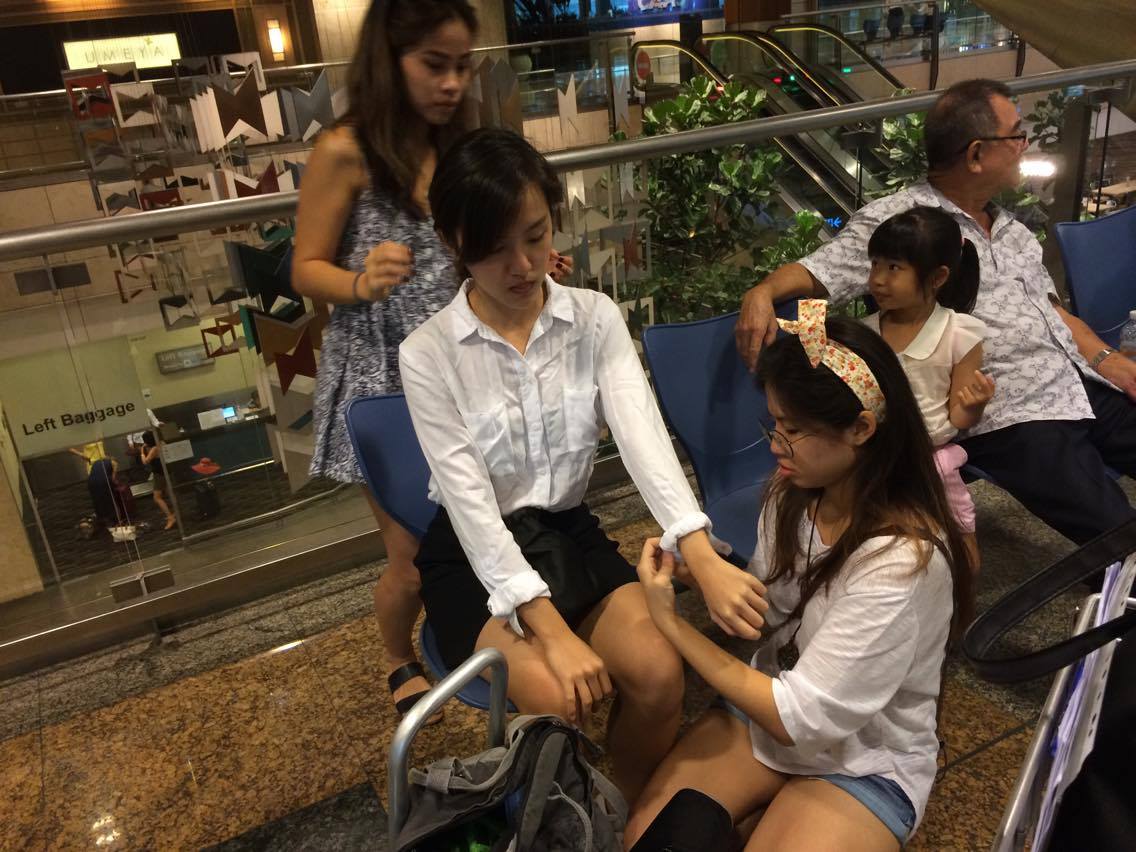 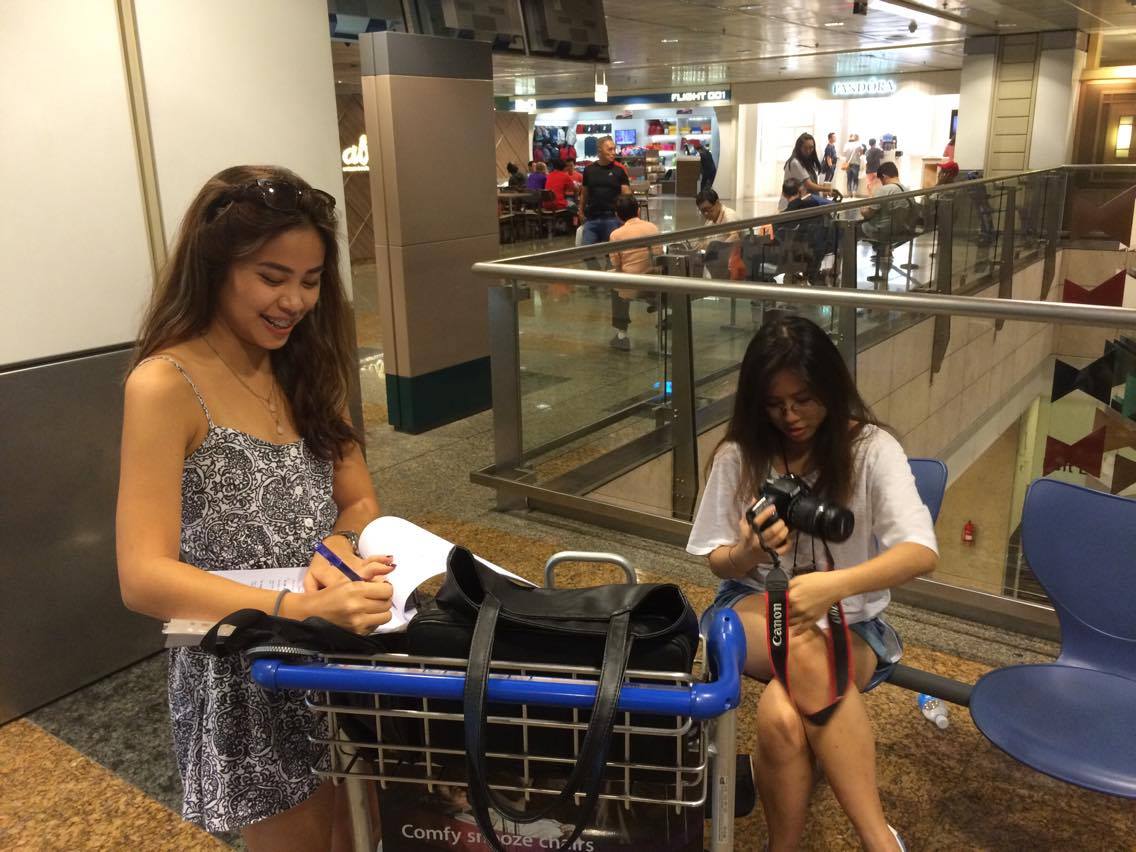 Planning the sequences and shots 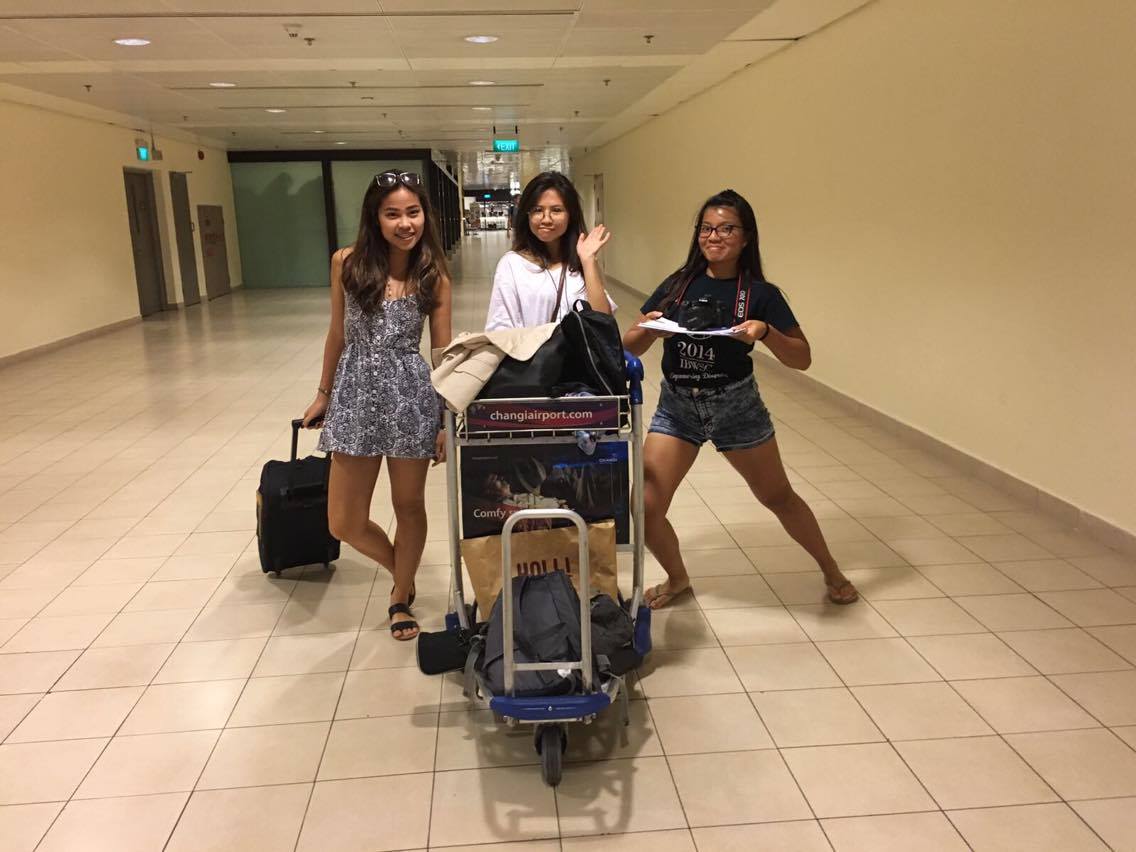 The Dream Team (plus Danielle) ft. our makeshift Dolly of the day

The second day was in town (Orchard), where we filmed Danielle going “crazy” and her waitress scene. It was also quite a challenge to film since we had to do crowd control in a very crowded Orchard area on a Sunday. This was especially so during the filming of Danielle running towards the camera, where I had to run backwards faster than her in order to capture the shot. However, what was worse was that we actually left the camera charger in the MBS room and forgot to take it when we left, which left us with a dead battery – so we just bought a new one in order to save time. 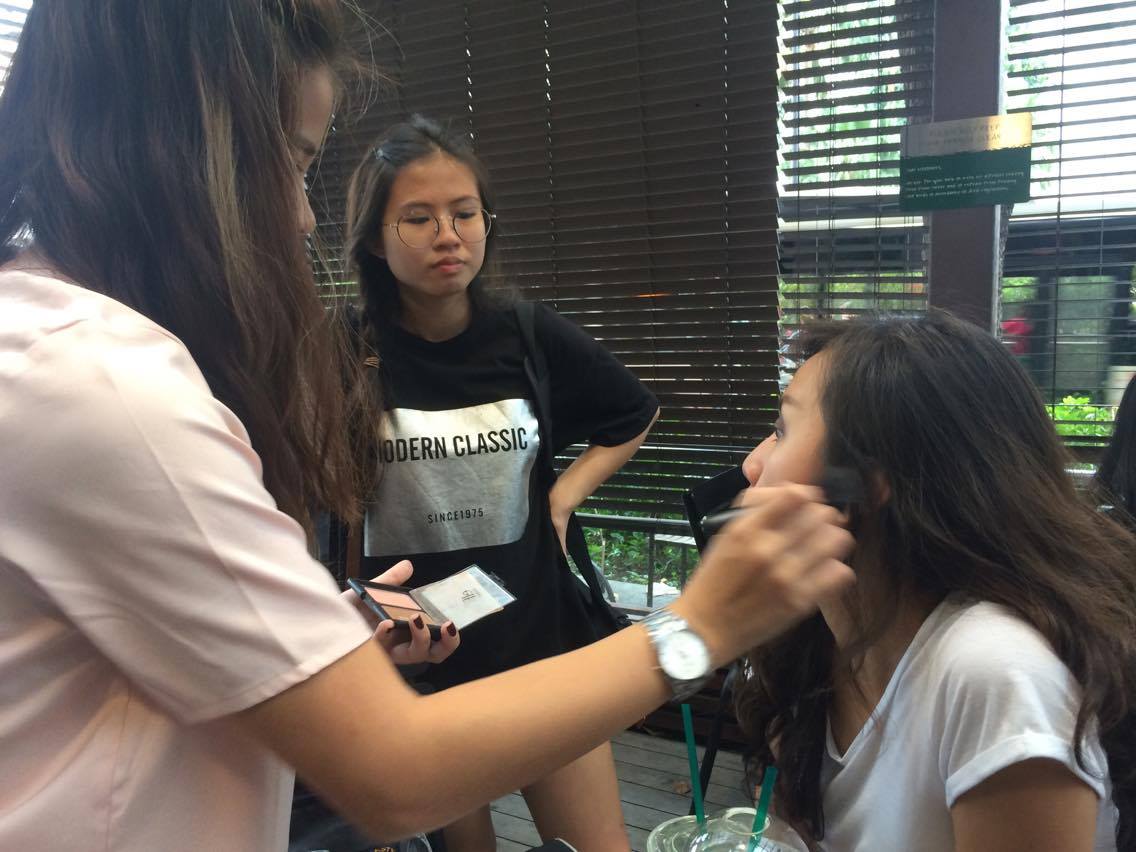 Make up for Danielle’s waitress scene 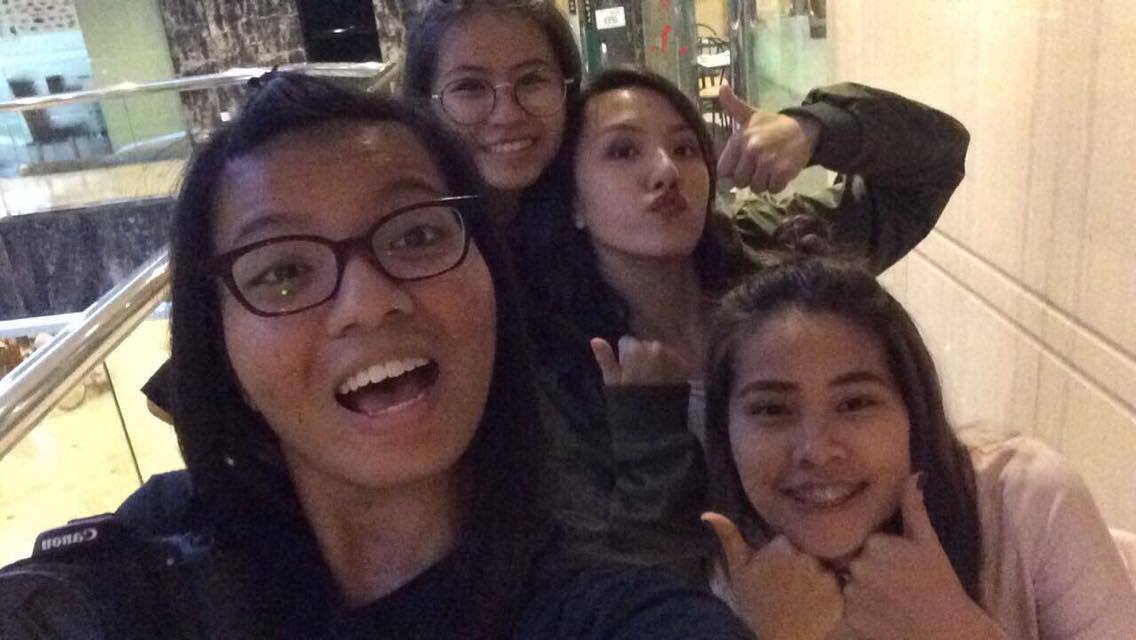 Filming final scene for the day

The third day was us in school filming Danielle and Jay’s dates and serious conversations, while the fourth day was spent filming my detective scenes, as well as Danielle’s chef and mood board scenes – all of which thankfully was uneventful.

Editing wise, we decided to split the work the edit 3 different parts of the film to get an idea of our editing styles and how the story would flow with either text or narration. We had issues trying to solve how we could merge the music seamlessly together, as we used 3 different tracks in our film. We were wondering if having a narrator in the film to explain what our protagonist was doing / thinking would help to solve this, as well as provide a more comprehensive background to the whole storyline, OR whether we should just use pure text instead like in the Catch me if you can trailer. 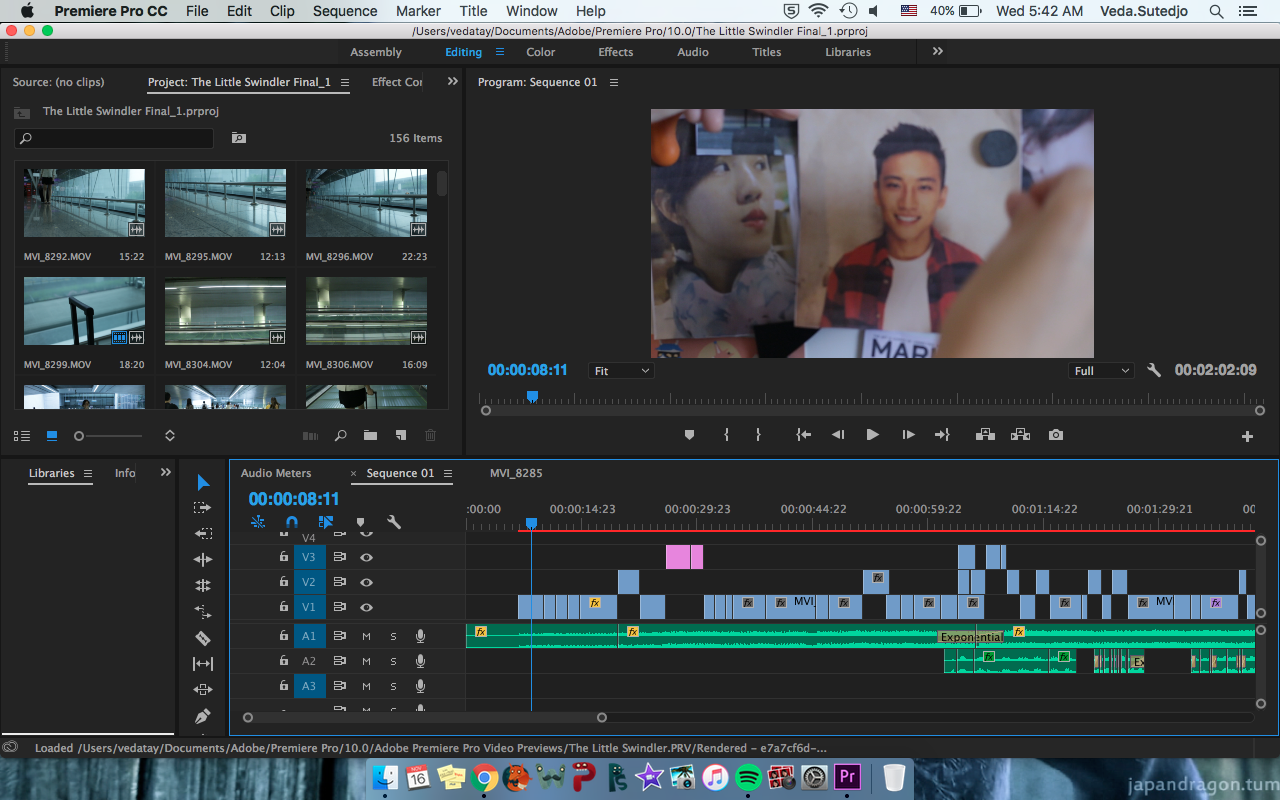 However, after consultation, we were told that the 3 clips we edited had various styles that although had different perspectives, told our story aptly according to the mood of the film and character development. We were then suggested to do a 3-part trailer for a television series instead of a long trailer since our film had a clear split in terms of mood (first: comedic introduction of character, second: meeting of second character and dates, third: breakdown of character as she goes through internal conflict.) This then made it easier for us to transition the music since we didn’t have to find ways to merge the music clips together seamlessly, and also gave us a central focus in the various parts. We would usually come together as a group to review and re-edit our different parts, commenting on ways to improve a certain scene by shortening it, rearranging the sequence of events, editing the lighting in the film, and most importantly adjusting the volume of the audio and reducing the background noise.

And at long last, we are finally done with the film!

This project was an extremely educative, as we managed to pick up new skills (camera angles, directing a shot to improve it, types of camera shots etc.) and solving problems through creative means (like using the airport trolley as a dolly). We hope you guys enjoyed watching our film as much as we enjoyed creating it! 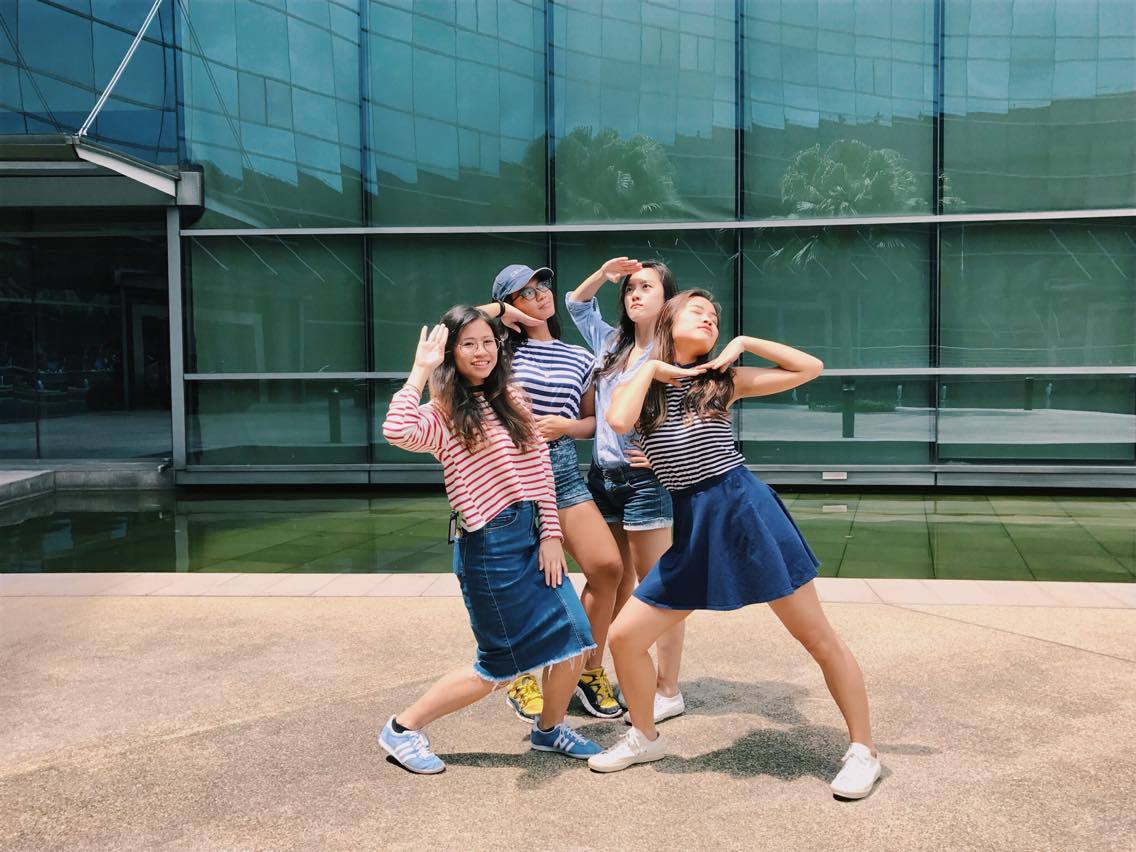