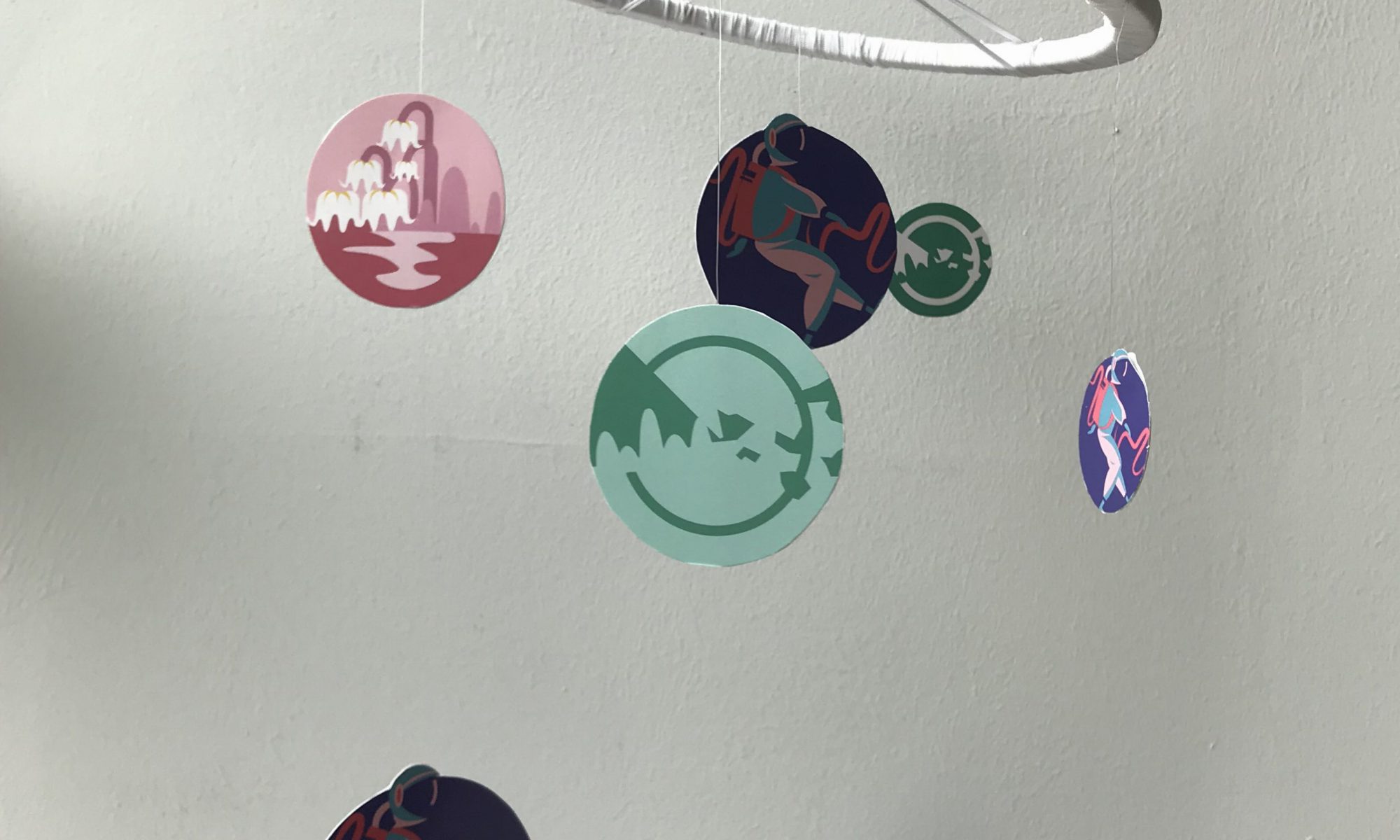 For our very first project in Visual Communications, we were tasked to create a mobile for a hospital that revolved around the theme of hope. The focus of the project involved designing graphic forms that used concepts pertaining to figure/ground relationships.

Keeping in mind the idea of hope, my final product (both the graphics and hanging structure) are based on the theme of outer space. Wanting to go in a more whimsical direction, I used astronauts and ‘planets of hope’ as content for the main graphics as I felt that it could appeal better to a wider demographic of both young and older patients.

With regards to the concept, I chose to go with the theme of outer space with astronauts and ‘planets of hope’ helping to convey this idea as in my opinion, astronauts serve as a sign of hope – they are always on the search for new signs of life. With Michael’s help, the involvement of the ‘planets of hope’ expanded this concept, where it reinforced the idea of the astronaut being on the search of new life.

Wanting to convey the idea of hope in a more straightforward manner, the planets themselves have symbols of hope integrated into their forms.

For the first planet, the graphic features a valley with flowers – the flowers are meant to be Lilies of the Valley, a common type of spring flowers, and spring itself often being associated with hope, bringing about instances of new life. The second planet was also meant to convey hope as signs of new life. Inspired by the visuals and purpose of a submarine radar (where objects would appear as lit-up spots it), I thought it would be interesting to have a planet that showed the idea of objects appearing on a submarine radar. There was also the inclusion of curves and geometric shapes to represent rock formations.

To further reinforce the idea of new life, as well as finding a link to tie the three different graphics together, they all feature a wave in the background. It was meant to represent the bleeps in a heart rate monitor. The rises and dips in waves in the monitor indicates the presence of a heart beat, and therefore to me, is a symbol of life.

The placement, on the other hand, was focusing on contrast between sizes, having a range of small, medium, and bigger graphics, with one in the centre.

One of the design principles applied was the use of figure/ground relationships. The graphics of the mobile were to be results of experimentation with figure-ground relationships and Gestalt theories (proximity, similarity, closure, good continuation, and common fate).

Trying to experiment with methods of closure, where the figures seemed complete although their forms were not, the figures were an integration of positive and negative space. Mostly used in the astronaut and submarine radar graphics, I tried to use the background to help fill in gaps left by the positive form (e.g. the helmet in the astronaut and the rock formations in the submarine radar).

As for the flowers, I wanted to try methods of good continuation, where an intersection between two or more objects makes it seem as though it is a single uninterrupted object. Seeing the possibility of creating a continuous flow between the shapes of hills and petals of the Lilies of the Valley, I used the layout of waves in a heart rate monitor to create a flow between the two, attempting to form a smooth continuation, thereby seemingly forming a single shape.

I also wanted the graphics to play with the idea of contrast. I felt that a contrasting colour palette will help to bring out the shapes better amongst one another, and allows for a brighter and more vibrant composition. Contrast in colour was used within different shapes of the graphic, as well as in the front and the back; a wider range of colours were used in the front while monochromatic colours were used in the back.

The process first began with conceptualising, where we were to come up with our own interpretations of what hope is.

After brainstorming all the symbols and objects typically associated with the idea of hope, I categorised these objects into sub-themes: spring, fairytales (i.e. Pandora’s Box), and outer space.

In addition to finding objects typically associated with hope and further developing the three finalised concepts, I wanted to research more into methods of experimenting with figure-ground. Coming across Gestalt principles such as proximity, similarity, closure, good continuation, and common fate, I thought I could use them as bases in forming the graphics.

Looking at more reference images also helped in seeing how else I could play with the positive and negative spaces, and the shapes I could use to convey the elements I wanted to use. 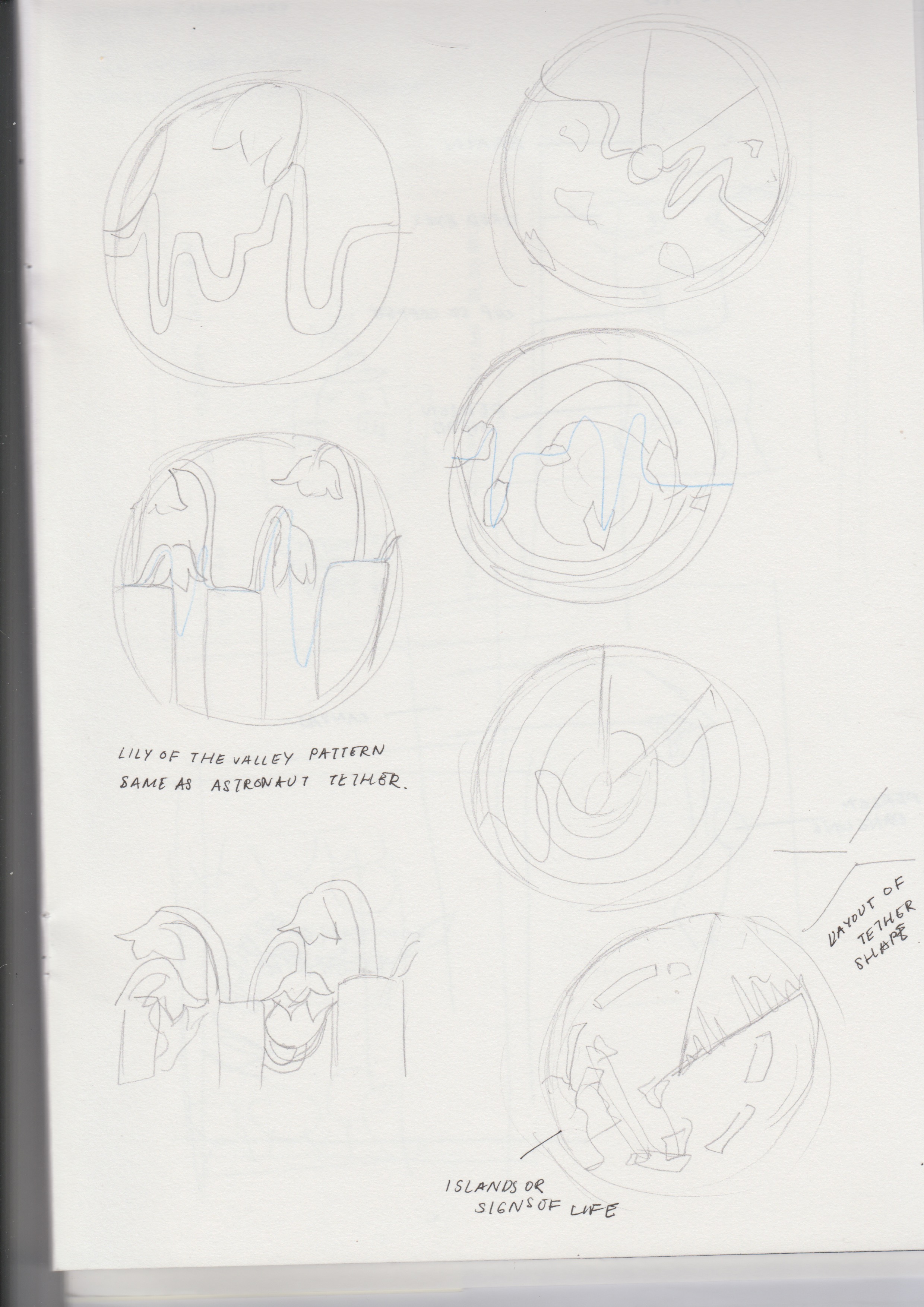 After brainstorming on the theme of hope and figuring out the elements we wanted to include in the graphics, we practised taking the illustrative elements out of them and drew contour shapes, and how they would look like in both positive and negative forms.

After receiving feedback on how I could improve the graphics – using more shapes instead of lines – we had another round of group feedback where we finalised the graphics we were going to use and further developments into figure-ground relationships.

The addition of colour was then looked into. Inspired by some bright pastel colour palettes in the reference image below, I thought using such colours was effective in conveying the idea of hope as something vibrant but at the same time, remained calm and peaceful.

After receiving feedback on the darkness and dullness of the chosen colour palette, I decided to go with something a little brighter and draws more contrast. Ultimately, I decided on this final colour palette.

After printing and cutting the graphics out, it was time to fix the hanging structure. At first, I used thinner wires that were covered with thread; after coiling them with one another in an effort to make them thicker and sturdier, the entire structure did not look appealing and was still not able to hold up on its own with the hanging graphics.

The second attempt therefore, consisted of using a wooden embroidery ring and coiling white yarn around it over and over again until the wooden parts were completely covered. The yarn made it have a softer exterior and seemed to give the entire structure a look better-suited for a hospital. However, with the metal bolts screwed onto the side of the structure, hanging it on its own made it topple to one side and therefore, the placement of graphics had to lean more onto the opposite side to make it balance.

One of the main challenges I faced in this project was the use of figure-ground concepts. More familiar with seeing graphics in their complete and literal forms, I had difficulty in experimenting with positive and negative spaces and in the end, my graphics ended up looking more illustrative then the supposed abstract shapes and forms. Furthermore, I felt that I could have been a little more imaginative with the background instead of using just a circle.