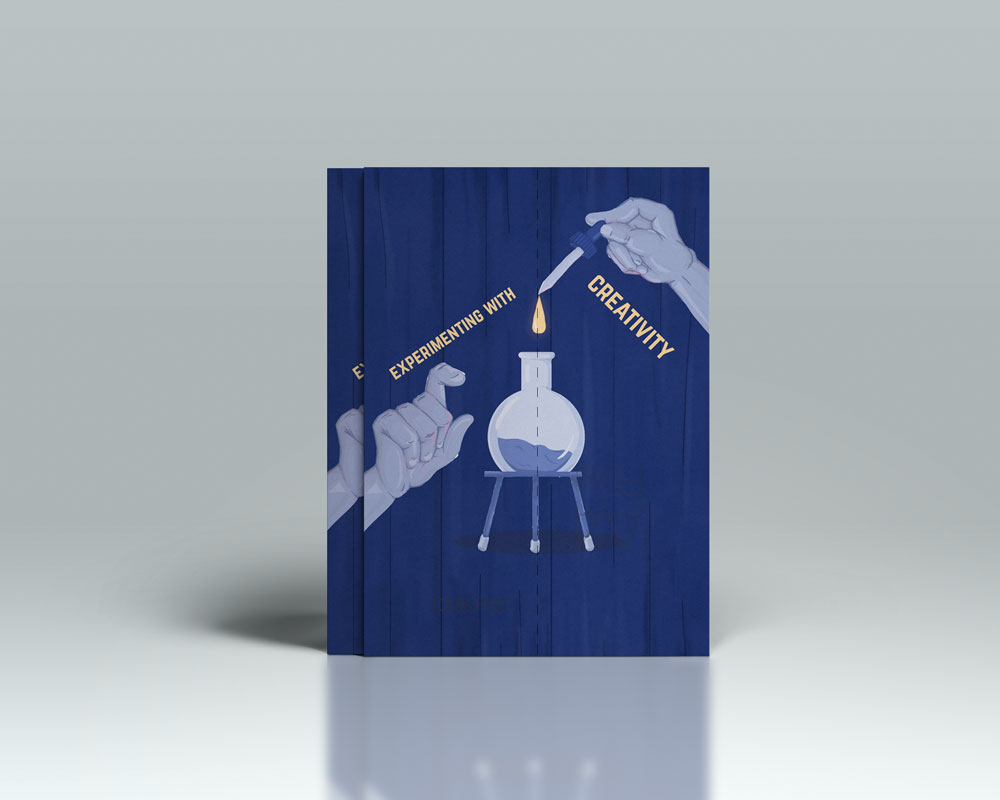 As a follow-up to the previous project, for our final submission, we were required to conceptualise and create a brochure for 2019’s Singapore Design Week.

Keeping to ‘Experimenting with Creativity’, the theme reflected in the previous poster project, the brochure I created for this project adopts the imagery and concept from the poster but categorises and displays information in a way that is suitable for a brochure and integrates new information about the exhibition.

Reinforcing the idea of experimenting, the graphics consist of science apparatus (test tubes, droppers, specimen jars) and an explosion of patterns. The use of a curtain as the background also carries forth the attempt to bring about a mysterious and magical mood that was also conveyed in the poster. The fold of the brochure, on the other hand, is a conventional gate fold. The fold helps to reinforce the idea of the exploding beaker where the front cover is still and adding the droplet into the beaker results in an explosion as seen on in the inside of the brochure, where it is much more colourful and shows movement through patterns and strokes.

The use of graphics in this case really helped in bringing forth the narrative of the entire brochure. Coupled with the unveiling nature of the gate fold, the brochure was able to effectively convey the experimental and explosive parts of the intended narrative. To represent the idea of experimenting, I used images of science apparatus, and the changes in shapes of the patterns helped in conveying the idea of an explosion.

The brochure also uses contrast to emphasise important details and at the same time, create an overall balanced and harmonious layout. Contrast is seen firstly, in the variation of size; more crucial information such as the slogan, title, and event details are displayed in a bold font with a vibrant yellow. Less vital information such as the short blurb and artist biographies are displayed using a font with less weight and is smaller in size, but remains readable. Contrast is displayed through different colour palettes; the text and focal points of the graphics uses a bright yellow and pink that has an outer glow. This is contrasted against less important graphics that use a pale blue colour palette.

Hierarchy is also used to create a smooth visual flow. Having a more quiet graphic in the front followed by a more vibrant and explosive layout on the inside that is unveiled by the gatefold helps to establish the flow of information. Furthermore, having the text and graphics vary in size and colour in terms of brightness and vibrancy helps in guiding the eyes from more important information to less important ones.

Similar to that of the poster, movement is established through the use of patterns that are more compressed in the centre, closer to the beaker, followed by it being more spaced out towards the edges. The explosive pattern was further enhanced by lines that depict motion and little bits of splatters found on the table and apparatus.

Research into brochure production began with us looking more into the types of folds that brochures could use. I was personally intrigued by gate folds and variations of it, because I felt it was an interesting and versatile way of unveiling information, and is especially appropriate for my brochure.

I was inspired by these two folds especially because of their simple layout that allowed for a straightforward user experience, but also comprised of an interesting layout. The folds here allowed for a linear reveal of information, thereby creating visual interest. Especially with the gatefold, having minimal text and maximum graphic to entice the viewer to open allowed for an interesting method of revealing information.

This is a more experimental fold I hope to try out as well. Going back to the idea of the slow reveal of information, I thought this was a very creative method of unveiling information and definitely creates visual interest. The inclusion of the die-cut and folds at the side which meet in the centre when flattened also seemed suitable for the curtain graphic I used in my poster. However, this may turn out rather flimsy and could deteriorate the ease in user experience.

For a more in-depth look into chosen exhibiting artists, please refer to: https://oss.adm.ntu.edu.sg/vwong005/chosen-designers/

I. Experimenting with Folds

After looking into brochures, layouts, and folds, we tried some of our own. Keeping in mind the content we had to display, user experience (where it had to be easy for users to open and fold back), and display methods (where they could be stood up on display stands), I tried to use simple but creative folds that helped to create an interesting flow of information, and die-cuts to give a sneak peek into the inside of the brochure.

Ultimately, with Prof. Michael’s advice, I decided to do away with the die-cut and adopt a simple gate fold. This way, I could have better control of the layout of information and therefore, more control over the flow of information. By focusing more on the layout of the content itself as opposed to using a complicated fold, it allowed me to establish the same intended mood, but with a simpler and more straightforward user experience.

As we had to adopt the same concept and overall similar graphics from the previous poster project, I used the same colour palette but decided to replace most of the graphics. Instead of a glowing ball of yellow mass to represent creativity, I tried illustrating new images and patterns to better convey the idea of ‘experimenting’, ‘creativity’, and to portray an explosion. Therefore, I decided to have science apparatus to convey the literal meaning of experimenting. Also, having more than just a beaker gave the page more life and excitement, allowing for more platforms for movement, colour, and placement for information.

I felt that having the science apparatus, and the transition of a flask with still liquid into a flask with bubbling and glowing liquid to represent the formation of creativity was a more straightforward and easy-to-understand graphic that managed to embody the overall theme of the exhibition.

After settling the content to be placed in the brochure, what was left was putting them together to establish a flow of information. Already having the idea to keep the front and back simple and more mysterious, I tried to have a more dynamic layout on the inside to contrast against the front and better convey the ‘explosive’ graphics. However, it was not simple to work with long chunks of text, and their unequal placements, with the aim to keep the information easy to read and locate. It was also challenging in avoiding the fold lines to allow for easy readability. After playing around with the layout, from a more static composition, I moved the text blocks around and instead of having them all align with one another, I decided to place them in a manner similar to that of the patterns: compressed in the centre and more spaced out towards the edges, all in a radial layout instead of in vertical columns. This was a better method in helping to further enhance the concept and also gives a more dynamic, exciting, and contrasting composition to that in the front.