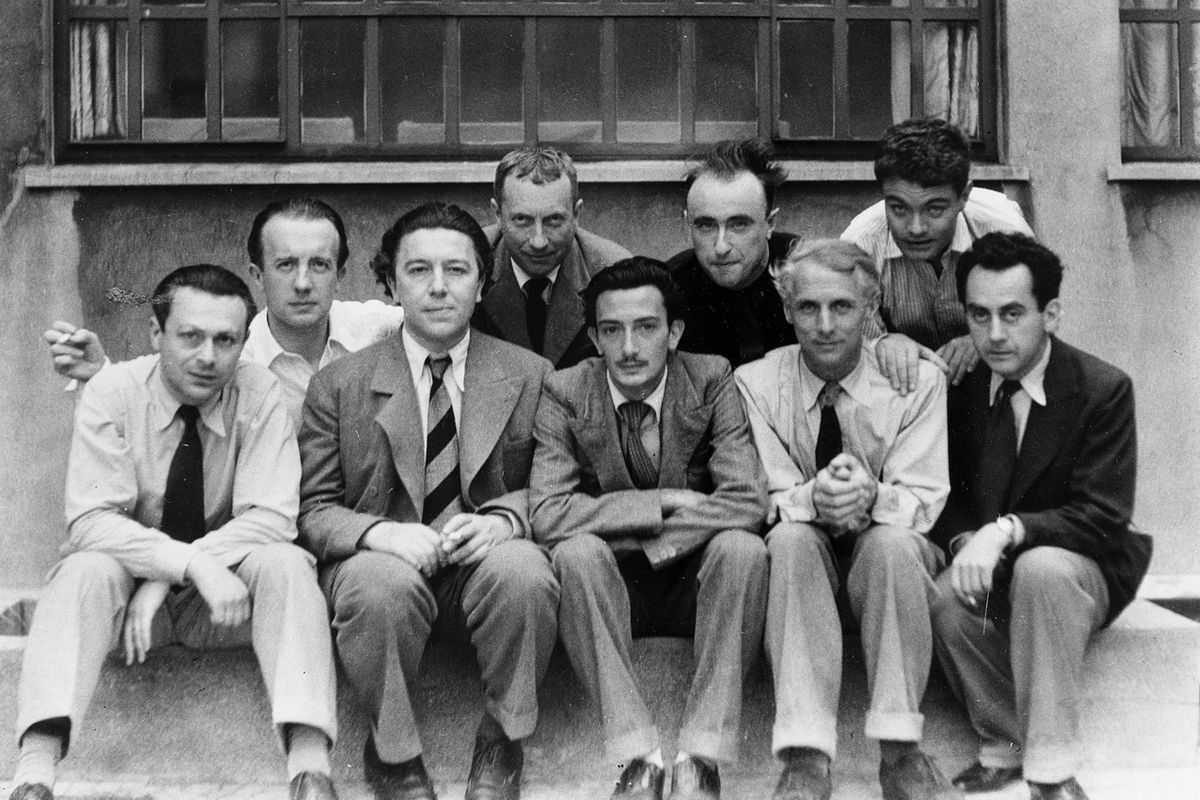 The aim of Dada Art was an aid to stop the war as well as an outlet to ‘vent frustration with the nationalist and bourgeois conventions that had led to it’. ‘Their anti-authoritarian stance made for a protean movement as they opposed any form of group leadership or guiding ideology’.

Dada artists are usually agitated by politics and sought to ‘incite a similar fury in Dada audiences’. Dada artworks involve presenting ‘intriguing overlaps and paradoxes’, where ‘they seek to demystify artwork in the populist sense but’ ‘remain cryptic enough to allow [viewers] to interpret works in a variety of ways’. For example, some artists portrayed people and scenes ‘representationally’ ‘in order to analyse form and movement’. Some perceive that in order to understand these works, one must be able to ‘reconcile the seemingly silly, slapdash styles with the profound antibourgeois message’.

Hannah Hoch, the ‘It Girl’ of Berlin Dadaists, was considered the pioneer of the Dada ‘cut-and-paste’ style. Hiding in a tiny suburban cottage away from Nazi scrutiny, due to her bisexuality and anarchic art, Hoch was branded a ‘degenerate’ by Nazis and being constantly being edged out Dadaists. She, however remained a notable figure in the Dada movement, with her distinguishable use of photomontage, the original ‘art of protest’, and the ‘aesthetic of liberation, revolution, and protest’.

Satirising Weimar politics, Hoch’s works are said to be ‘so balletic’, as if her ‘snipped images and dismembered figures dance on the page like leaves in the air’; her work is perceived as ‘tough and punchy, yet always delicate’. Often possessing a ‘narrative undercut’, one can distinguish Hoch’s works through the enlargement of a single feature and deviations from being ‘doctrinaire or narrowly-focused’, where many of her works ‘make men into women and vice-versa’. In contrast to her male counterparts in the movement, Hoch ‘never seems to have lost her characteristic sense of wonder’, possessing a ‘desire to ‘show the world today as an ant sees it and tomorrow as the moon sees it”.

Growing out of the Dada movement, Surrealism was also considered a ‘rebellion against middle-class complacency’, however with artistic influences coming from different sources.

Sharing the same ‘anti-rationalism’ as Dada, Surrealist artists used art as a ‘reprieve from violent political situations and to address the unease they felt about the world’s uncertainties’. This was done through using ‘fantasy and dream imagery’ to create works in a variety of media that ‘exposed their inner minds in eccentric, symbolic ways’, ‘uncovering anxieties and treating them analytically through visual means’.

Some distinguishable Surrealist factors, methods, and techniques include:

‘Epitomising the idea that life is the greatest form of art’, Salvador Dali, one of the most prolific artists of the 20th century is the most famous Surrealist artist. In addition to the fame credited for his works and collaborations with other notable figures, Dali was also renowned for his ‘flamboyant personality and role of mischievous provocateur as much as for his undeniable technical virtuosity’.

His works embody ‘obsessive themes of eroticism, death, and decay’, reflecting his ‘familiarity with and synthesis of the psychoanalytical theories of his time’, his work is embedded with ‘ready-interpreted symbolism, ranging from fetishes and animal imagery to religious symbols’.

His body of work also ‘evolved the concepts of Surrealism and psychoanalysis on a worldwide visual platform’, as well as ‘modelled permission for people to embrace their selves in all our human glory’.

David Lynch is a director and screenwriter most well-known for his ‘dark, offbeat’ films and TV series, the more recognisable ones including Eraserhead, Blue Velvet, Mulholland Drive, and Twin Peaks.

Branded with his own style, the ‘Lynchian Style’. Lynch’s films are known to be ‘bizarre’, with ‘dark worldview[s], disturbing subject matter, and a surreal tone’.  In his approach to films, he uses repeated motifs, emphasises on setting, and expands on the idea of ‘superreality’ and the subconscious.

Joe Webb is an artist recognised for his ‘collages with a message’. Reimagining found imagery through simple editing, he addresses issues that range from ‘climate change’ to ‘war and inequality’, ‘challenges of living in today’s modern world’.

“Joe navigates a rich landscape with grace and humor, making nice with many recognizable visual pastimes. He plays them against each other in a way that puts different eras in dialogue, allowing characters to travel far from their 50’s Home Gardening Magazine roots to the far cosmos. He flirts with the themes of nostalgia and loss but ultimately composes lighthearted images that are in dialogue with today’s sampling culture, collapsing and hacking together sources from across the universe in fun and rudely jacked up color schemes.” – Wangechi Mutu

Collage artist Eugenia Loli is most known for her style of works where she uses ‘photography scanned from vintage magazines and Science publications’ to ‘create bizarre visual narratives’ that have hints of ‘pop art, dada, and traditional surrealism’.

Nicolas Bruno is an established photographer who suffers from sleep paralysis, a condition in which ‘keeps him in a halfway state between being asleep and being awake’. Through his haunting, yet incredible images, he recreates the experiences from his dreamscape. He starts with experimenting with dream recollections, ‘creat[ing] a concentration of work’ where he ‘[warps] his anxiety into a positive product and expresses his vision to the world’.

The processes in this project is made up of two main stages: preparing the compositions and silkscreening.

In preparation for composing our prints, we were first required to have an understanding of the two major art movements we would be drawing inspiration from; Surrealism and Dadaism. This was followed by selecting our movie quotes.

When selecting appropriate movie quotes, I began with narrowing down some of my favourite films and directors, keeping films with excellent dialogue and writing in mind. I then filtered through these films by bringing in the direction I was going for; using David Lynch’s method of dissecting reality into three states – being awake, sleeping, dreaming (and limbo, added as a personal choice). The quotes were then categorised into the respective states.

The quotes were then narrowed down further after considering their literal context and if taken out of context, their ability to reconstruct a completely different and surreal narrative. Some of the words that stood out in the quotes were also taken into consideration. After deliberating and brainstorming some ideas, I decided to go with the following quotes:

After finalising the quotes and having a clear direction in mind, I was ready to layout the compositions. Since this was based on Surrealism, I decided to take the quotes completely out of their contexts and focus only on selected words and ideas.

Keeping in-line with depicting the state of dreaming, I wanted to create a composition based on the nonsensical nature of dreams. The following images show different compositions and ideas.

Drafts 1 and 2 reflect the same concept; portraying the madness associated with conspiracy theories through the use of symbols such as aliens, red thread and thumbtacks, and spaceships made up of musicians, vinyls, and bell jars. Draft 3, on the other hand, depicts a man who has ‘lost his senses’, and as a result, has his sense of hearing and taste jumbled up, resulting in him wanting to eat music. However, given the nature of the images in threshold and halftone value, they were not able to fully form on the silkscreen.

‘Sometimes I think I have felt everything I’m ever gonna feel.’

Exploring the state of being awake, Composition 2 was originally meant to represent the sense of feeling and touch.

With regards to feeling, I wanted the composition to show various levels of emotions; the use of knives to represent anger, pill bottles to represent sadness, and flowers to represent happiness. The repeated motif of hands and the third eye were meant to embody the sense of touch. However, after consulting, the message being conveyed was not as clear, and I decided to try another concept of divinity and depicting an entity who has reached the pinnacle of feeling all there is to feel.

‘I chose not to choose life. I chose something else.’

Expanding on the state of sleeping, I wanted the composition to convey a narrative of what happens to one’s body when one chooses to sleep instead of facing life.

Satisfied with the elements used, I chose to try out different layouts as the layout was pretty messy; the main focal point is difficult to pinpoint. This was adjusted by changing the directions of the geometric patterns, as well as altering the Life Magazine direction and adding more elements representative of the situation.

Generally satisfied with the layout of the composition, I just experimented further with changing some of the elements to make it more visually appealing. In this case, I swapped out the paper bag for a potato sack to make the figure seem more terrifying and draw a better sense of unity amongst the elements.

This project also had a silkscreen component which allowed us to learn more about preparing for and exposing our own silkscreens, followed by printing our own tote bags.

The silkscreen process, although tedious, was eye-opening. We were taught the process of preparing silkscreens, the technical aspects of each procedure, and the functions of various materials.

Personally, I faced quite a number of challenges in exposing my own screens. After preparing my first composition, I was quite satisfied with the layout and the elements I used; the positive feedback received made me all the more confident with how the print turned out. However, given the nature of the original images, they did not turn out very well when imposed with halftones and threshold and as a result, the silkscreen print did not turn out as expected.

Given the time constraints left in preparing other compositions and the limited time left in exposing our screens, I was not able to experiment with varying levels of threshold and halftone, and had to change the top half of my composition completely.

A Romance for HER (and him)

10 Famous Surrealist Artists You Must Know