Quote no.1: There was no use in trying to emancipate a wife who had not the dimmest notion that she was not free – Age of Innocence, 1993

Keywords/key phrases for this quote: Emancipate, Wife, dimmest, not free.

This quote was taken from the Age of Innocence (1993) which talks mostly about how Old New York was superficial and caged in their pride and tradition.

To me, I likened not being free to being caged up. I tried to use a bird cage but it was too literal. I thought how I could have this visual with some human aspect to the visual and I came up with using a ribcage.

What I derived first from the word ‘dimmest’ from the quote was the idea of light. To push the idea further, I thought of a flame instead of a lightbulb as fire has more humanistic qualities as compared to electric light. I can relate this flame to the passion that the ‘wife’ in the quote does not have. Therefore, I edited components that relate to a flame.

I added dripping wax which I placed on the rib cage as well as a hand holding a cigarette stub. At first, I wanted them to be accompanied by flames of a candle and the smoke of the cigarette. However, the quote did say the wife had the ‘dimmest’ notion that she was free. Therefore, I chose not to put those components in. This is so as to emphasize that she can never go beyond her cage (aka ribcage).

At first, I placed the ribcage in the middle as a sole object. However, it seemed rather plain and I had nowhere to place the hand with the cigarette. So, I blew up the image of the ribcage and skewed it to the side and placed the hand with the cigarette directed towards it. Through this i hope i created some unity and rhythm that flows through the implied running lines from the fingers to the ribs.

The ribcage was initially an engraving it had more values as compared to the hand. I tried to take this as an advantage therefore i created a threshold layer for the hand and created a greater contrast between the hand and ribs.

At first, I wanted to have flames as the background. As i have said before, I did not add in flames to further emphasise on how hopeless it is to ’emancipate a wife’. Instead I found a print of reflections on water where the contrast of the light and darks were very apparent therefore I put it as the background to unify the two subject matters. 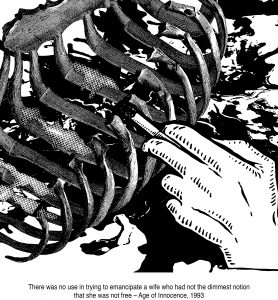 This quote was supposed to be a very comical yet emotional quote.

At first, I thought of gaining inspiration from the movie scene. Using the telephone booth, maybe filling it with things that denote emotion such as pillows etc.

However, I wanted to be more original so thought about another alternative: vending machines. When I searched for vending machines, I came across this retro print that was about buying careers. So, I thought why not make it sell emotions instead! I proceeded to crop out the background and the people out of the vending machine.

For the emotions ‘available’ in the vending machine:

For the background in the vending machine, I pixelated a picture of Blanket wrinkles and zoomed in on it. On the other hand, I used a rendering of water ripples as the background. 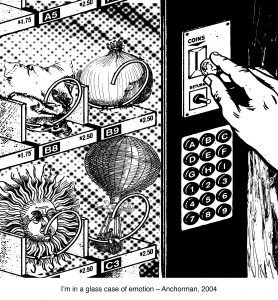 Firstly, I woul like to highlight the greater meaning behind the quote.

“My life amounts to no more than one drop in a limitless ocean. Yet what is any ocean, but a multitude of drops?” ― David Mitchell, Cloud Atlas

To me, this made me feel that everything that you do in this life amounts to almost nothing in this world. Therefore, i wanted to create something that translated the sense of expectations and nothingness.

Since this quote is mostly centered on the idea of the Ocean, Water and life. I did not really want to mimick water droplets or waves. Instead i played around with the idea of ripples on water. One will take note of the ripples emerging from around the hand.

I also indirectly played around with typography as one can see from the concentric circles surrounding the hand. This was done to represent the letter ‘O’. However, to prevent an immediate relation to the quote i added in the slash to create some distraction and contrasting line with the direction of the hand. To hint the viewer more about the image’s relation to the quote, i brought forward the emerging portion of the hand above the background as well as the letter ‘O’. 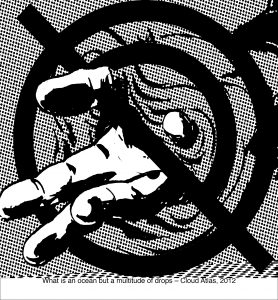 ‘Well, if there is a higher power, why can’t he get you a new sweater?’ ‘He’s too busy looking for your brain.’

This quote was meant to be an act of sarcasm by the main character in the movie against the bullies in her school. However, since the movie was a rather romantically inclined, I took a romantic spin on this quote. For me, if someone was too busy looking for such an obvious thing such as your brain, he/she was probably looking in the wrong direction. Since Romance is driven by the heart, he was probably looking in your heart ‘for your brain instead’

I like this composition as it creates a sense of rhythm between the shredded layers of the heart and the contour lines of the eye rendering. At first, the eye drawing was in a triangle formation. Then i warped it to suit the contour of the heart.

There is also a variation of the densities of black and white in the composition between the rendering of the eye and heart. 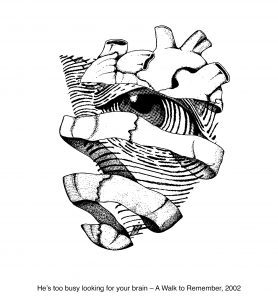 However, this composition was too minimal and not experimental enough. Therefore this is my play of the print with an addition of a posterized background. 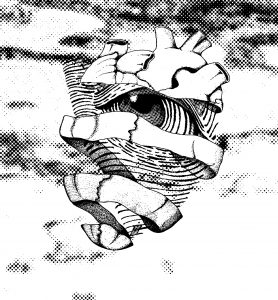 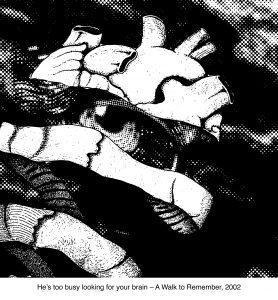 Above is the print that Ms Shirley did in 10 minutes? She experimented further with the contours of the background, playing more with the negative and positive spaces of the composition. She also skewed my composition more to the side, out of the frame so that there is more visual interest in the print.

As for the more practical portion of this project, it was not as easy as I thought it would be!

During the initial exposing of my screen, it felt that even the smallest details mattered towards the making of the print. Later on in the process, I realized that practice makes perfect. Fortunately for me, I had a rather simple print to create therefore my lines and edges of the print were crisp. 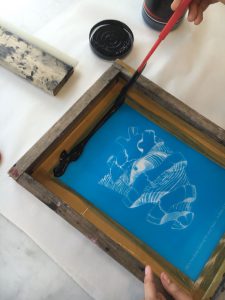 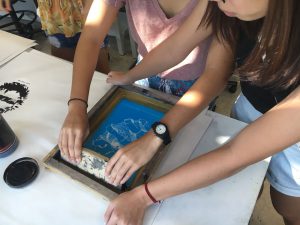 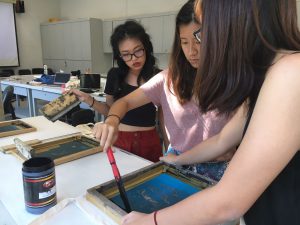 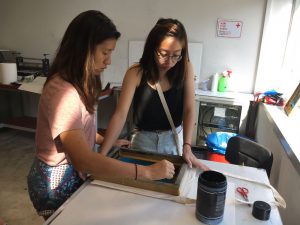 Link to Video: This is the video footage of me doing my final press!