Ozu was no doubt Japan’s master of Shomin-geki – the modern-day middle-class comedy. He found the way that his aesthetic would explain the film more than the narration. Even in the time where sound in film was making a revolution in the Hollywood industry, Ozu’s films were all alike and ‘uneventful’ almost as he eliminated other film techniques from the west. 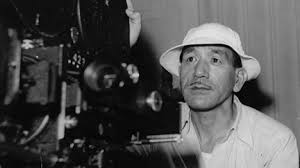 The sense of normality permeates through all his films. He captures every form, ritual, and surface of the middle-class life in Japan. Each and every frame has a meaning and carefully crafted of everything in the frame. The recurring ingredient of normality in all his films creates a parallelism. For subject matter, he puts several characters together in the focus of a frame and pinpoints all the different, contrasting character’s actions choices against each other. This is made as they go through the same trials and tribulations and create not a comparison but rather an overview of how different characters deal with the same problem of life in general. The mood is not as encapturing as American films were there are action scenes like those seen in gangster movies but they rather bring you through a journey enrapturing you in the charm and warmth of the Japanese family setting. One might even question what is the final moral of the story because it so assimilated to those of everyday life and parallel to each other, but it charms you once again and draws you back into the movie.

Parallelism also is shown in the recurring motifs he shows in the beginning and end of each film. to show the cycle of our lives. And through this visual device rather than having just that American-dream happy-ending, there is a nostalgic and delicately counterpoint balanced attitude. Ozu uses Mono no aware – as if the term was translated from English to Japanese itself, it is an attitude which each character is aware of what has come to pass, and has come to a silent and willing acceptance of what things are, what changes have come across the characters. He also uses elliptical editing which is a  lack of tempo and unity. Ozu chooses to not depict certain events, as seen in tokyo story – the parents mention about a stop that we did not hear of (Osaka). In a way Ozu omits major plot points – once again in late spring, we skip through the most important event, the wedding of the daughter. Which then highlights what Ozu sees as an important scene on screen. With this he alters time – as seen throughout Tokyo story, the mother’s sickness deteriorates without any warning to the viewers.

These scenes are connected by transitions. These transitions lack unity in them, no shot lasts longer than another, he creates this sense of importance of every shot, and the idea of impermanence that it might be the last time we see it. It stresses the passage of time.

It is known that Tzu has more talk in his films, but when it comes to moments of silence, the camera gives us a still of an interior or scenery. this could last for as long as 5 mins. almost serving the audience a point of view as to what is like to be contemplating over events in a still setting. 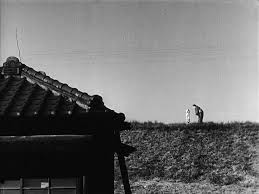 How Ozu holds out on editing creates emotion, rather than making the cuts distracting like in the gangster films of the west. Another challenge that Ozu presented to Hollywood films was the use of the Tatami shot – angle of someone seating on the tatami mat, direct requires the viewer to look straight on. he creates this static and distant – however, the feelings weren’t distant. Ozu ended up creating a very inviting setting to the viewer and not creating an uncomfortable, voyeur type of setting.

In all of these techniques talked about, Ozu created the most full-bodied and distinctive in cinematic history. One can almost say he plays with simplicity but in depth. He puts all his attention to how to present what is seen. all relevant subjects were in the frame and that essentially highlighted the delicateness of the normality of the middle-class life. 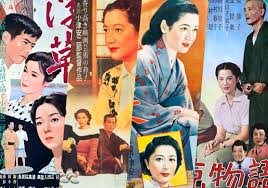