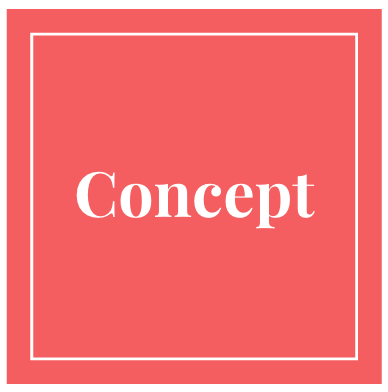 I wanted my zine to be a continuation of my POV project on Hitler and beauty, specifically exploring the aspect of artists (who happen to be world leaders) interacting with their art.

I took away the concept of ‘Beauty from the POV of Hitler” and opened it up to introduce another Winston Churchill, who just happens to be:

a) A world leader

I feel like it was a beautiful coincidence and there couldn’t have been anyone more perfect to accompany Hitler in this zine. In the zine, I have created/curated/compiled collages that serve as montages/ commentaries of their political and personal life.

Hence, I have titled my zine: “A COLLECTION OF COLLAGES ABOUT WORLD LEADERS.”

When I was still in the early stages of doing research for my content, I had these pre-conceived notions that Hitler= bad and Churchill= good. However, I came to realised that theres no clear black and white, and there’s only grey matter. Churchill, like any other human, had a dark side- he was an imperialist, racist and made a lot of nasty comments along with his inspirational ones.

I realised Churchill and Hitler weren’t all that different.

Both world leaders are incredibly complex, contradictory and larger-than-life human being and wrestle with these contradictions during their lifetime.

Hence, in my collages, I wanted to prompt my audience to question, is Churchill really a hero? Is Hitler really a villain? Most of the collages are left to be ambiguous at surface level as they allow the audience to create their own conclusions/assumption based on what I have created. 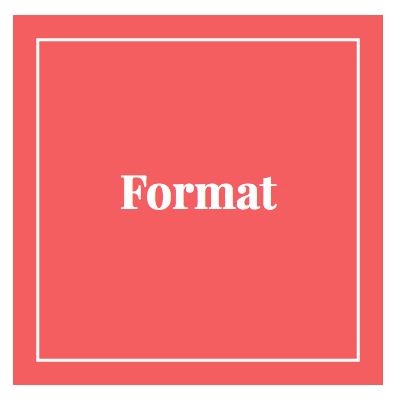 My target audience is specifically people history lovers/ history students. Because of this, the way my collages are designed are similar to that of a political cartoon- very minimal text, heavily dependent on visuals and of course, an underlying message/commentary. Just like a political cartoon, only those who understand the issue will understand what the message of the cartoon is.

As I decided that my zine was not going to be educational, rather, it would be for viewing purposes and to encourage people to question current beliefs, I didn’t add in additional historical information in the zine. However, I did explain certain historical events to the class.

My whole format is strongly connected to my overall intention behind the zine. I didn’t want the two men to ‘interact’ or ‘meet’ with each other, therefore I wanted to have them on opposite ends of the page. I’m adopting a calendar style format, where you read the pages in landscape form, and only read from the bottom until you reach the end.

( I’m just realising now that when Eugene suggested that I do a calendar format, he was talking about the whole thing- including the binding! I don’t know why I didn’t consider the ring binding. I think it’s because I had this pre-conceived notion that binding either has to be stitching or staples…. How did I miss that…)

As for the paper, I went for a clean white card stock with a matte finish. I felt that this was the optimum choice as any other colour would not provide the clean look I was going for, especially since the collages were extremely colourful.

For the paper weight, I chose 250 gsm as it was a nice balance- not too thin and not too thick. Any thicker, I felt it would be too stiff to turn the pages.

For each collage, I have created accompanying captions that serve a a title to just slightly hint at the context. 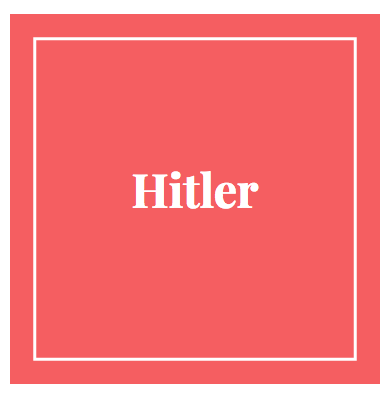 As I have already elaborated quite a lot on these existing compositions (https://oss.adm.ntu.edu.sg/wafa001/2016/03/23/2d-point-of-view-final-post/), I’ll just briefly explain again. 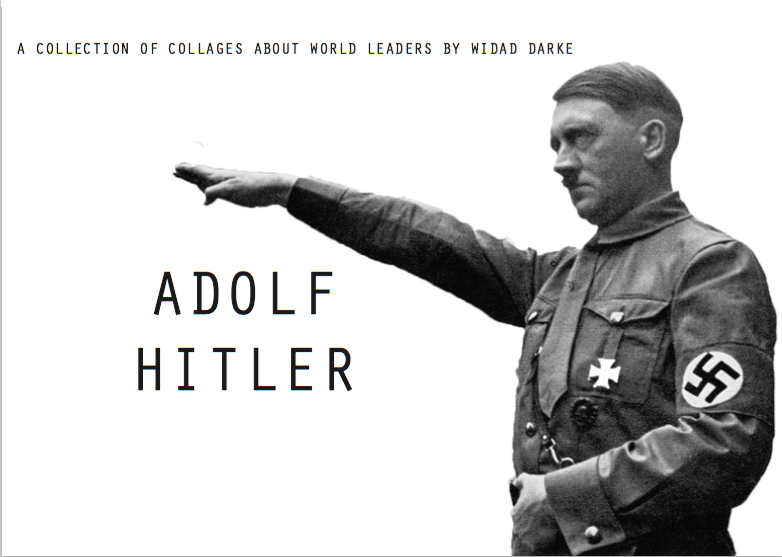 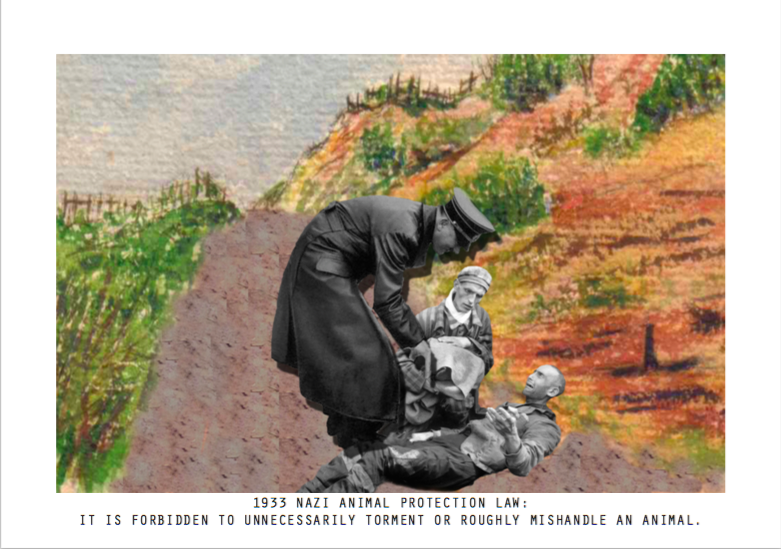 This collage refers to the irony that exists in these laws- that Hitler’s Nazis have created laws showing so much mercy to animals, yet have contrasting laws that oppress Jews. This collage presents a hypothetical question: What if Hitler treated Jews the same as animals? 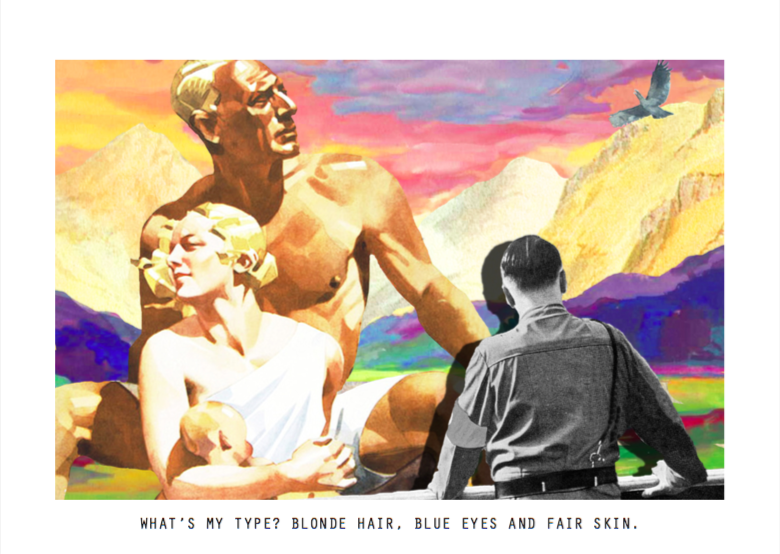 In this composition, Hitler is looking out to his ideal scene of Lebensraum (living space), which of course has his ideal Aryan family just basking in the sun. 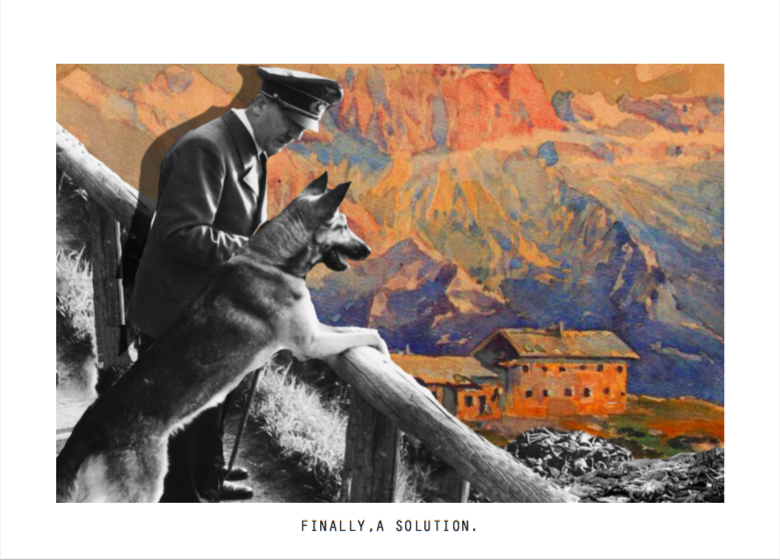 This caption is a tasteless play on words of the ‘Final Solution’ which was created to the ‘Jewish problem’. In the background you can see a pile of dead bodies. 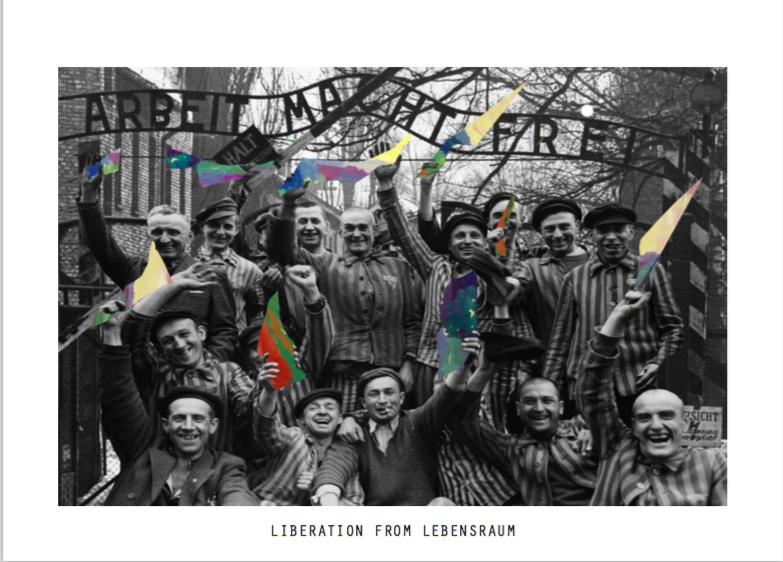 Here, survivors of concentration camps hold pieces of Hitler’s painting (specifically the one which depicts his Lebensraum) as a symbol of victory- as his death signifies the death of his ideals, visions and of their oppression. 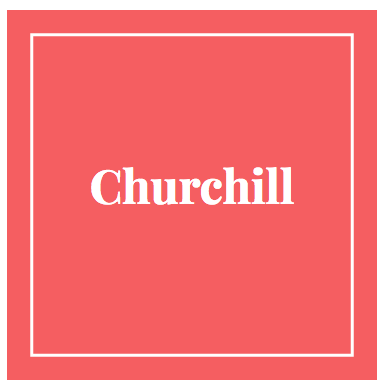 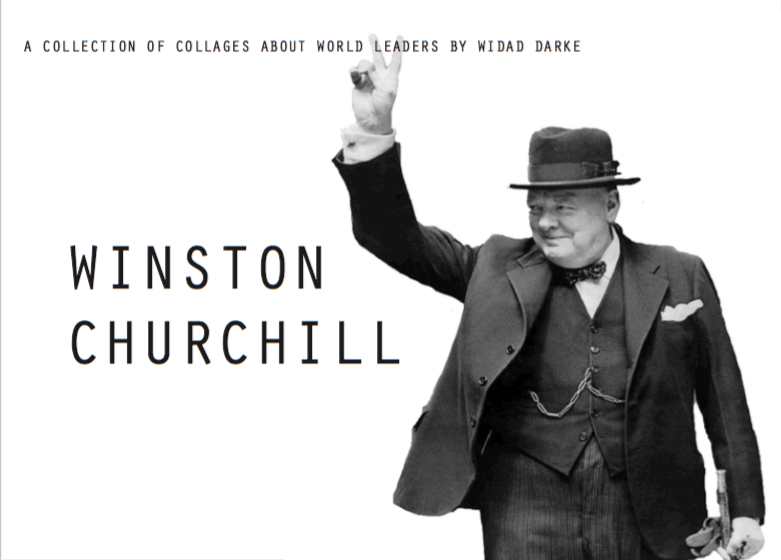 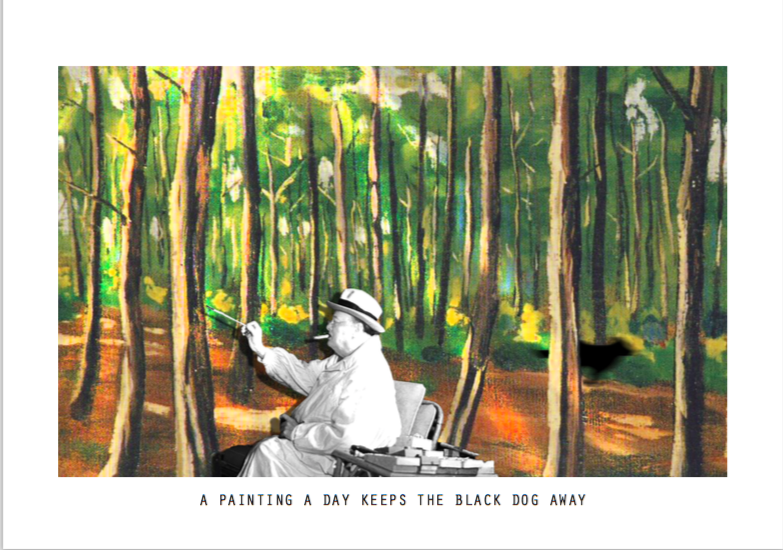 “Always subject to depression, Churchill told the poet and diplomat Wilfrid Scawen Blunt: ‘There is more blood than paint upon these hands’. Indeed Blunt believed that had it not been for painting, Churchill might have gone mad.”

Churchill referred to his depression as ‘Black dog’, so in this collage you can see that as Churchill paints there is light streaming through the trees, and to his right, there is black blur of motion that suggests a dog’s silhouette, running away from the scene. 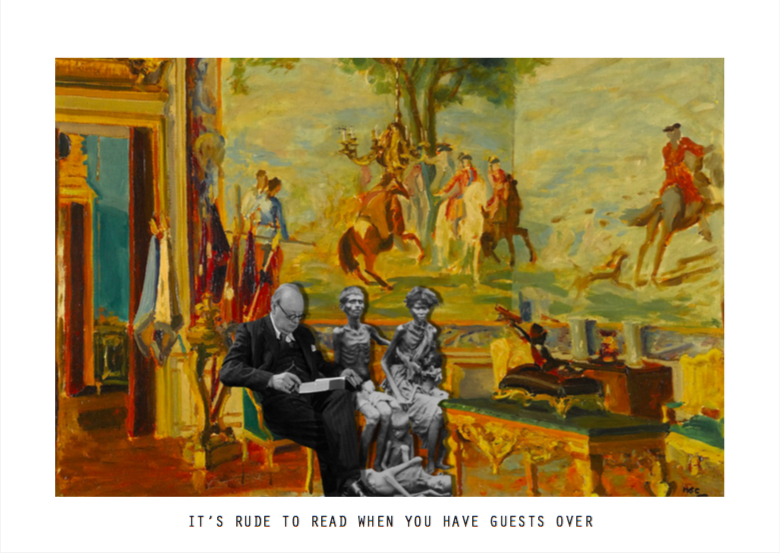 This composition refers to the Bengal Famine of 1943 which had a shocking 3 million people dying. Churchill was the Prime Minister of Britain at that toime.

“This famine was attributed to because by the imperial policies of the British. In reply to the Secretary of State for India’s telegram requesting food stock to relieve the famine, Churchill wittily replied:

“If food is scarce, why isn’t Gandhi dead yet?”

Up to 3 million people starved to death. Asked in 1944 to explain his refusal to send food aid, Churchill jeered:

“Relief would do no good. Indians breed like rabbits and will outstrip any available food supply.””

This collage makes reference to the blatant disregard Churchill displayed for the Indians. 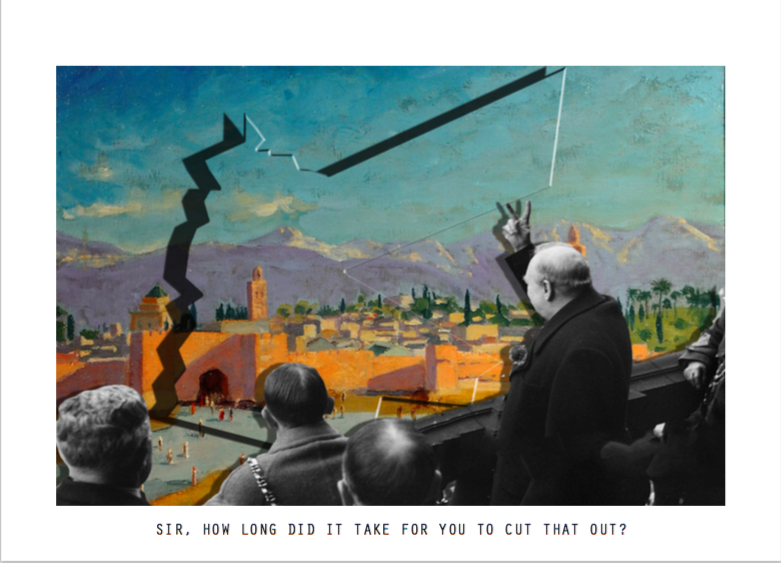 I created the ‘cut-out’ in the painting in reference to the obvious triangular division named “Churchill’s Sneeze” or “Churchill’s Hiccup”.

“Winston’s Hiccup or Churchill’s Sneeze is the huge zigzag in Jordan’s eastern border with Saudi Arabia, supposedly because Winston Churchill drew the boundary of Transjordan after a generous and lengthy lunch.” 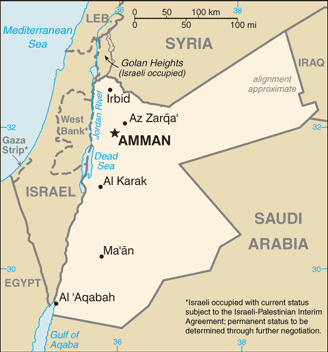 This collage hints at Churchill’s imperialist tendencies and actions, and pokes fun at his trademark ‘V for Victory’ hand sign.

“Churchill himself was never shy about interfering in the troubled politics of the Middle East. He cheerfully carved up the region, awarding new nations like prizes to various Arab dynasties after the collapse of the Ottoman Empire, with scant regard for local loyalties and tribal traditions. He also enthusiastically supported the early settlements of Zionists in Palestine.” 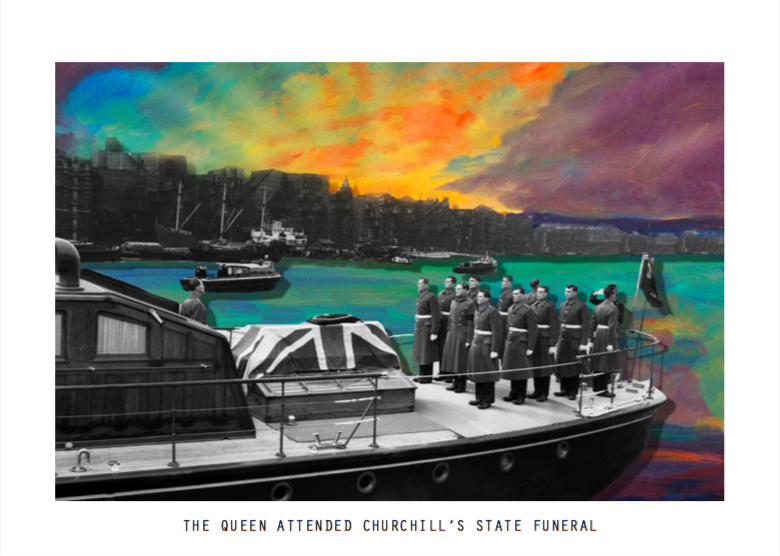 This collage concludes his life montage- where Churchill is give a state funeral- quite the contrast to Hitler’s death of suicide and being burnt. Did Churchill really deserve the state funeral and honour he received? Or was his victories far larger than his failures? 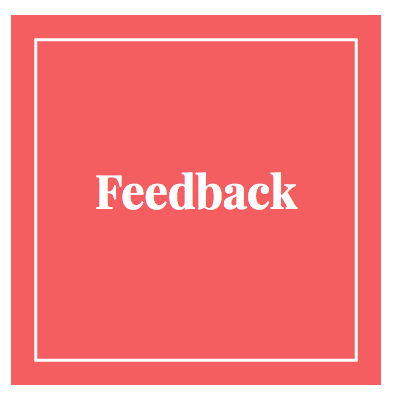 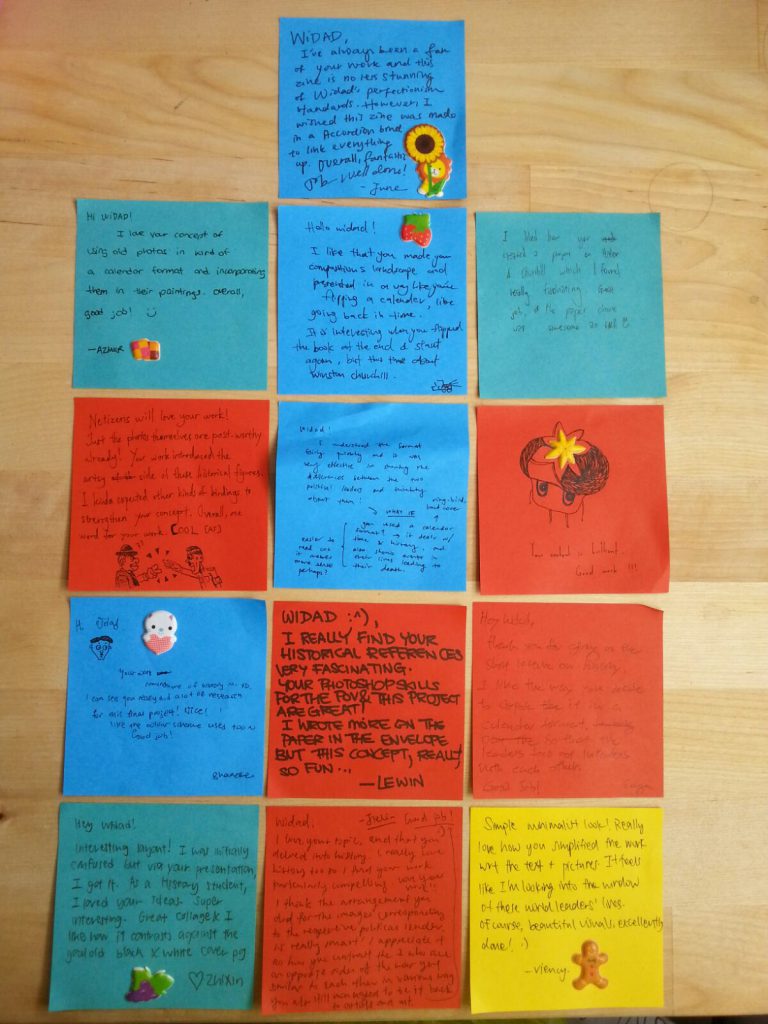 During the exercise where we viewed our classmates’ zines for a minute each, I felt a sense of impending doom (okay I’m being dramatic) as I noticed that many of them were holding my zine in different directions, and flipping back and forth.

I feel really bad for causing this confusion, and it was a major oversight on my part. After getting feedback from everyone, if I were to reprint this zine again, I’d definitely do it in the same format but just a different binding! A ring binding- like the way a calendar is designed. It’s quite crazy how binding can change so much.

Some of my classmates commented that they would have preferred the accordion binding.

However, I honestly don’t feel that the accordion binding is best suited for what I intended for this project. 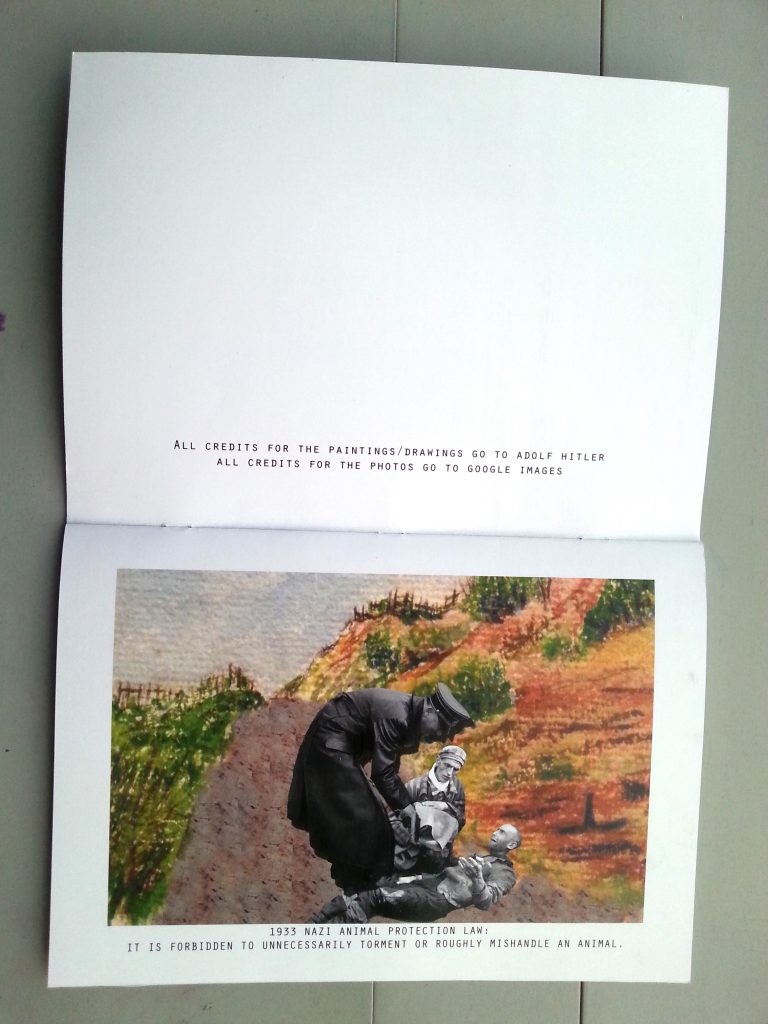 I accidentally place the text for the credits the wrong way. It should have been flipped the other way round to serve as a subtle guide on how to read the book. This caused a lot of confusion:(

Joy raised some technical issues which I wasn’t aware of and didn’t realise they actually posed a problem :/

The border in the front and back page were not aligned/consistent with the rest. The printing shop I went to wouldn’t allow me to have it full, as they had some trouble with their settings. And because of time constraints I had to make do with it 🙁 A comparison of both borders 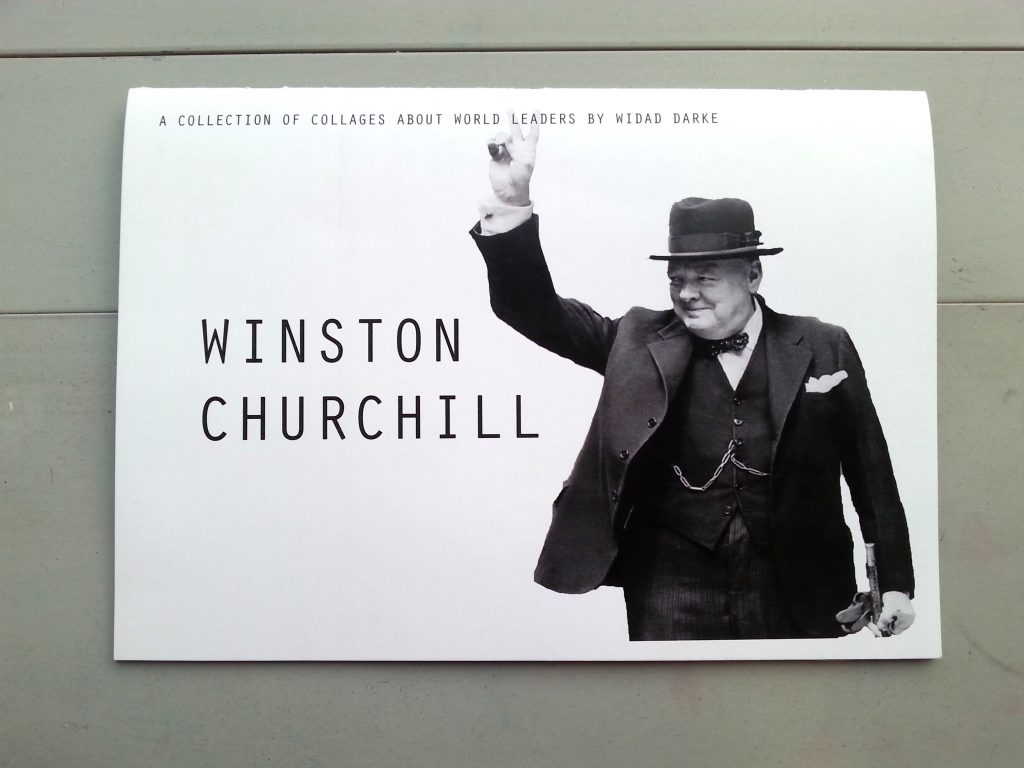 Actual printed copy- notice the awkward cropping of the borders 🙁

Joy suggested that the cover might look better if the title ” A collection of collages about ….” had been placed below.

She suggested not using all capital letters, to differentiate body text and the front cover text.

She also mentioned the lack of punctuation in some captions. I realise now that though it was deliberate on my part, the audience might see it as poor grammar?

Noted with thanks Joy! I think I might re-do this zine during the holidays (: 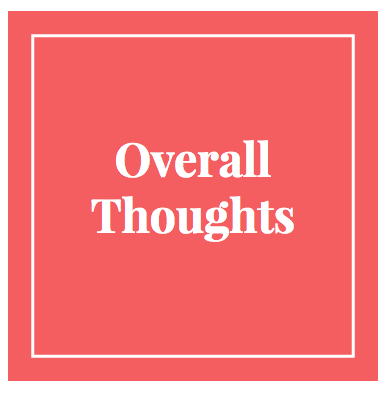 I’m rather disappointed with myself that I wasn’t aware of all these technical issues.

In hindsight, I feel like all these technical issues was due to:

Im not going to lie, I feel rather disappointed with what I have produced. But I’ll end off my post with a more positive note with what I’m glad about:

I was stubbornly stuck in a mindset that indesign was too complicated, and that there’s no way I could understand it, even after the in class tutorial. But I managed to do it, with the help of asking many questions to very patient friends, youtube tutorial and the notes I took down in class. This experience just proves to me that I have to stop thinking so negatively and embrace learning with open arms.

2. The beauty of zine

After looking through my classmates’ zines, I’m truly in awe of the different zines they have produced- from a guide on wave boarding, to a zine about a duck who is a detective! I hope to make more in the future, in my own personal time because it’s really super fun!

2D has now ended. But I’m always going to want to improve myself:

To Joy: Thank you for being such a wonderful teacher, endlessly encouraging and supporting us to do better, think better and be better versions of ourselves.