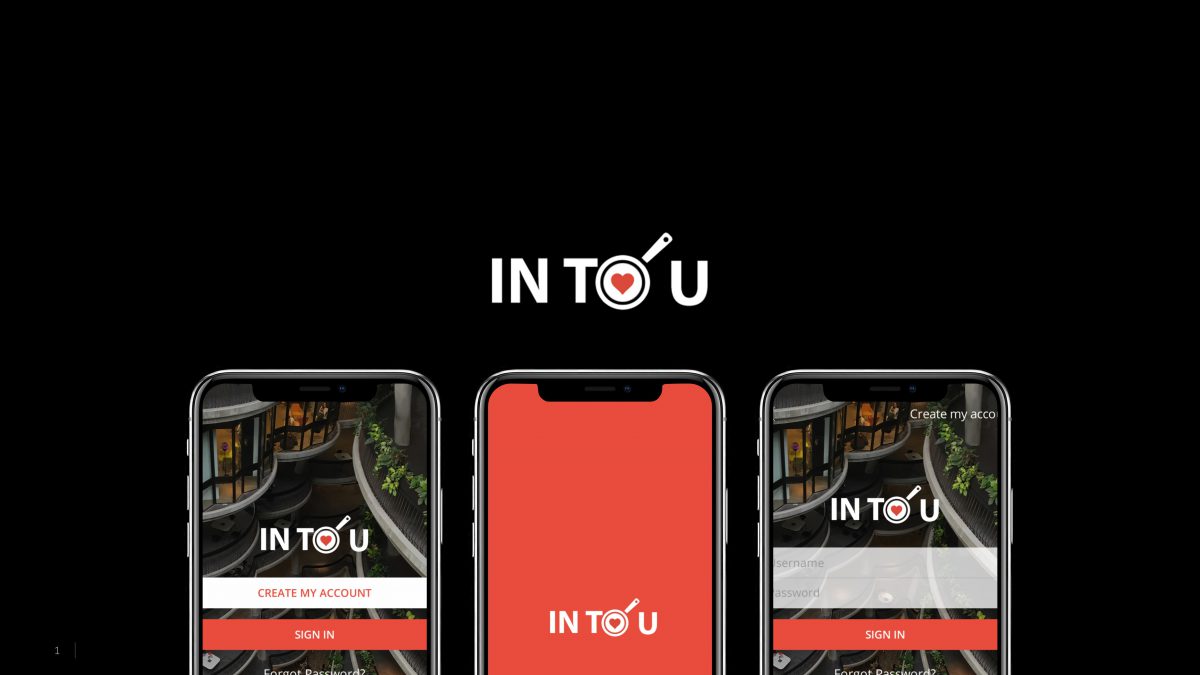 Download all slides here. Or Try out a working prototype here.

INTOU is a map with a little extra spice.  With recipes to cook up a hot date, you’ll be one step ahead of the dating game. Our comprehensive navigation system will ensure that the only time you’ll get lost is in the eyes of your partner. Community-driven ideas will ensure a mirage of ideas at your disposal just to seal the deal.

INTOU is a map which will show you the way to your other half. 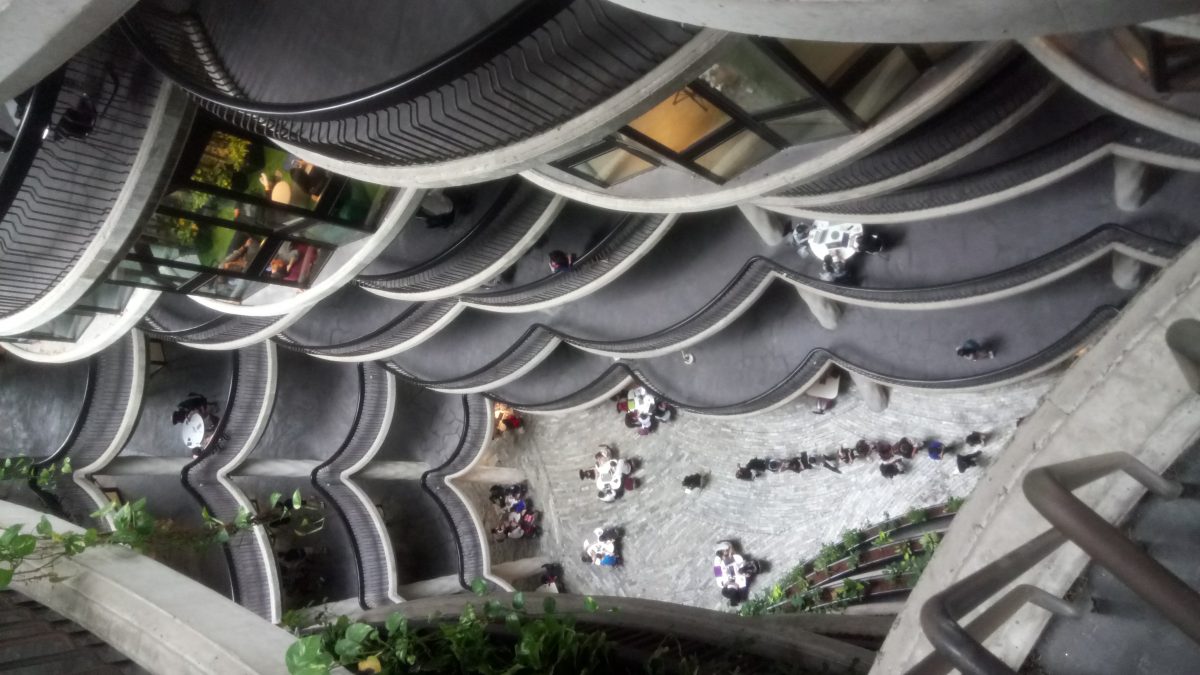 In chapter 4: ‘Body, Personal Relations, and Spatial Values’, of book: ‘Space and Place, The Perspective of Experience’, author Yi Fu Tuan discuss “Space” as a term, that brings with it far more complexity and abstract thought, that I at first realised.

If asked to define “Space” (before reading) I would immediately visualise an environment, a physical place that I have been to; see in my mind’s eye, where this place fits in the world I have, all mapped out in my brain.

Take for example: ‘Canteen 2’, it is in NTU, and from canteen 2 I can walk down the sheltered path, pass Hall 2, cross a road, go down the long stairs and reach ADM (where I spend the vast majority of my time when in NTU).

I have an image in my mind; what everything looks like, the texture of the bricks under my feet as I walk the pathway, the trees on my right and the volleyball court on my left as I traverse back to ADM.

The reading however has really began to make me pause to scrutinize this “brain map” and how I perceive space as a whole.

I agree with the author when he wrote about how man uses themselves (man) as the measure of all things, and that this transcends cultures and geography, bringing to mind feet/foot (as a measurement), an arm’s length, a hairs breath, a pace (as a unit) etc.

Another interesting thing noted was how man gave meaning to our spaces, space forwards (frontal space) and upwards closely tied to the future and rank (place of authority), and behind (rear space) and down, our past, place where lesser beings presides (within the shadow of his superior).

Perhaps it might be too impertinent to claim, that when infants sit up, the move from the supine horizontal to the seating perpendicular, is the only cause of his eyes widening, pulse strengthen and quickened breathing.

Still it is interesting to note that across cultures, most rulers and persons of authority are placed in a place of elevated status, i.e. Thrones placed upon a raised platform, and anyone seeking an audience with the person of higher authority having to bow or kneel before them. In a more modern context, Judges are normally placed on a raised platform in the center of the courtroom.

Many cultures also placed significance on the left and right, the right signifying the positive (power, good, legitimate) and the left, negative (impure, feeble), at least in most cultures.

Additional example (apart from those in the text) to demonstrate this: In Kyudo, the Japanese martial art of archery, the place of training called the Kamiza, it traditionally also housed the Kamidana, a small shinto altar, to the right (within the building). Meditation before and after each session is also mostly done while facing this place of power. Even in modern times, after they’ve stopped incorporating the Kamidana into the building’s design, during competitions, judges are still seated within this area (right side).

Just when and for what reason did man start assigning meaning to these spaces, and how come so many pockets of civilizations, separated by geographical distance and languages, share such similar beliefs and views when it comes to space? Is the perception of space instinctual, pre-programmed into our DNA? Shared and travelled with the traded done in the past? Passed down by generations of ancestors, long before civilizations were built?

In the chapter the author writes that prepositions are necessarily anthropocentric, and that statements of location, can give out far more information than the simple locational facts. I agree that when someone says that I have locked my keys inside the car’, a more subtle ‘anguished cry’ can be read. And that ‘I am in my office’ could also be read as ‘come in and see me’ or ‘do not disturb’.

I would also like to put forward on the other hand, that statements of locations might be even more complicated nowadays than it perhaps was, when the book was first published (in 1977).

Statements like: “I am in my office” and “I have locked my keys inside the car”, today can have different meanings depending on where this statement is made. “I am in my office” as a personal message to a colleague could (as mentioned earlier) very well mean “come in and see me” or “do not disturb”. But, if posted on any form of social media, they could take on a whole different range of meanings.

Within social media (unless you are using a personal messaging system), the majority of your audience (of said statement) will more likely than not, have nothing to do with your working life and therefore, saying that you are in your office, should not mean anything to these people in any way shape or form, right (they should not be able to read anything else apart from the statement)?

However imagine if someone shares the statement “I am in the my office” on Instagram, Facebook or twitter, maybe coupled with a picture of themselves, in a beautiful, well organized office, holding an expensive coffee from across the street. It might also very well be that this person has: a new job, just gotten a promotion, wanted to show off his/her office, wants to show everyone that they are really hardworking (if they are posting this at an hour when most other office workers are at home), etc.

“I have locked my keys inside the car”, on social media could just as easily be read as: I have a new car or look at my expensive name brand car. After all how can anyone on social media possibly help with you locking your keys inside your car? What other possible reason (other than bragging or wanting somebody to sympathize with) could someone have for posting a statement like that?

The act of posting something on social media with the intention of bragging, has gotten so prevalent that terms like: humblebrag was invented (in 2010).

With ‘distance’ also, due to the widespread presence of the internet and media, perhaps the idea that distance somehow implies the degree of accessibility might not necessarily apply anymore.

Overall I think some parts of the reading was a great observation of many points, but some ideas might have changed over they years, as technological improvement has affected and changed the way humans communicate his space, and thoughts about what space means/represents.

An appetizing dating app, disguised as a cooking app.

It all boils down to being:
A dating guide; helping couples too busy to leave Pulau NTU, but whom are still hoping to do something memorable together with their special someone.

All date ideas will be presented in short recipe form (example below) and users may choose to add add their own versions/recipes.

END_OF_DOCUMENT_TOKEN_TO_BE_REPLACED 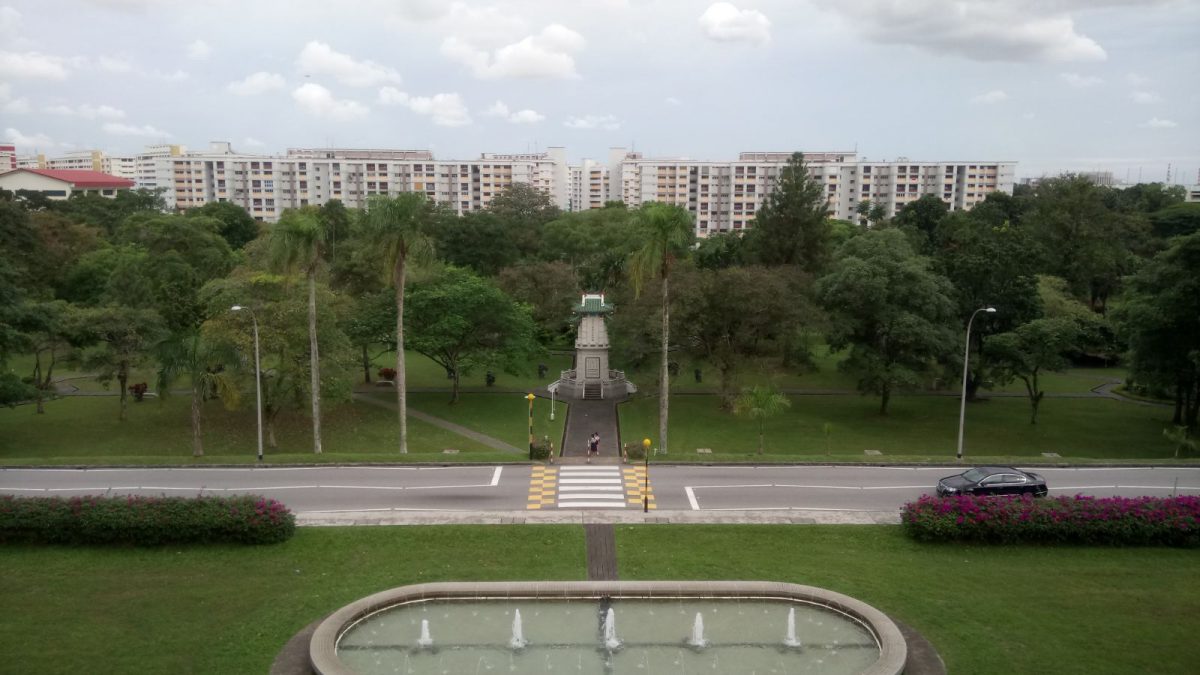 The exhibition at the Chinese Heritage Center in NTU, has brought me more insights into the history of Nanyang Technological University and it’s past students/founders/benefactors.

I feel like current students (including me) take for granted too much. Things like school facilities, opportunities for jobs after graduation, support (from school), etc.

This trip has encouraged deeper thinking/reflection into how NTU has become what it is today, and also surprisingly, what it means to be a student.

Apparently, the famous Nanyang lake, used to be a small reservoir of water used to store the water (used in the construction of the still unfinished university). And only after the completion of the university (buildings), did all the students and professors from the university come together to beautify the reservoir and thus the Nanyang Lake was created.

When the guide asked us about whether the current students still felt so strongly about their school that they would physically help beautify/build/improve the school, and whether we still possess an NTU spirit…The silence that followed felt like such a waste. 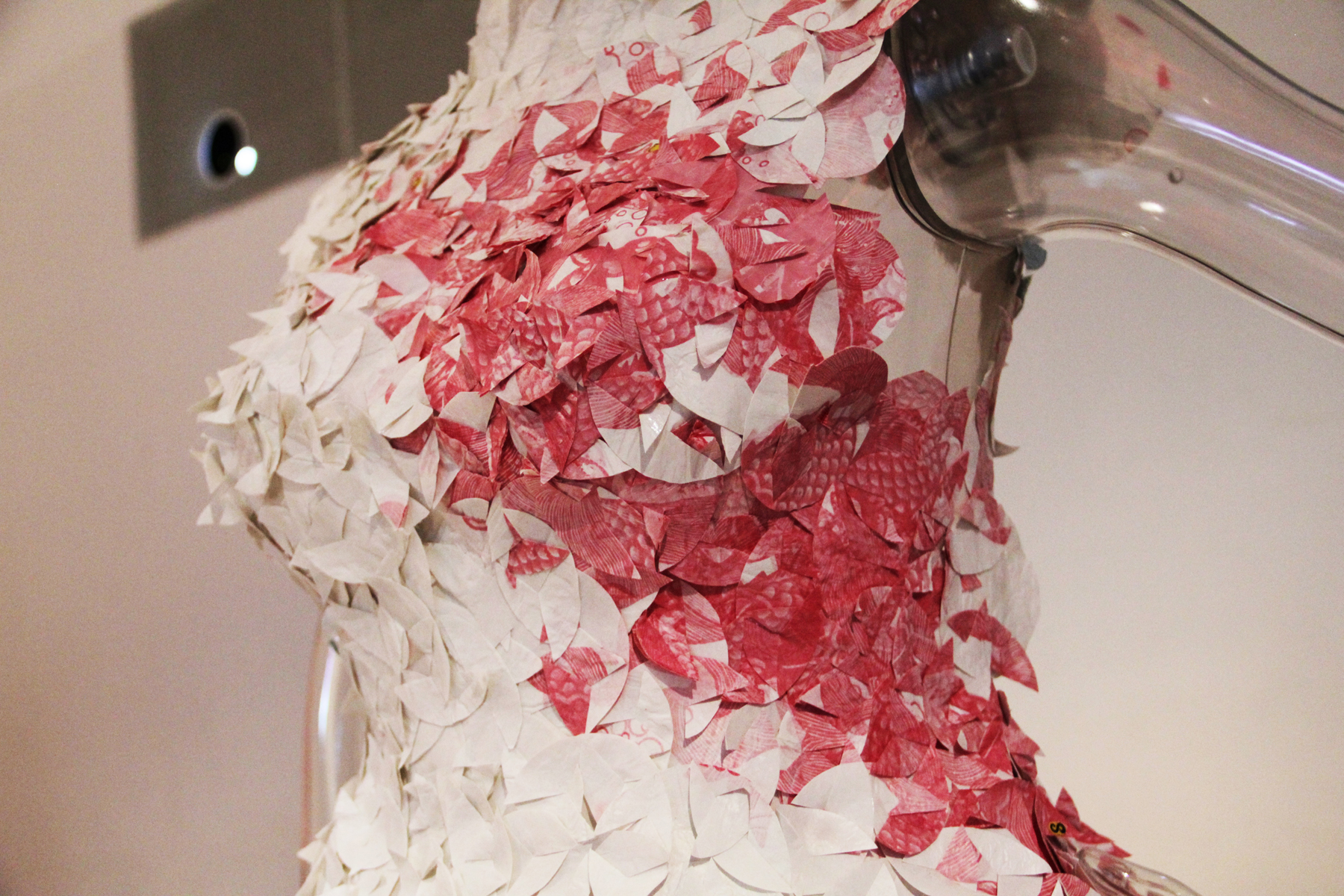 Grocery Bag is finally complete and showcased in the Sense and Sensibility Exhibition at the Art & Science Museum (Singapore) on the 31st October and 1st November.

Thank you everyone who managed to come down to support the exhibit! 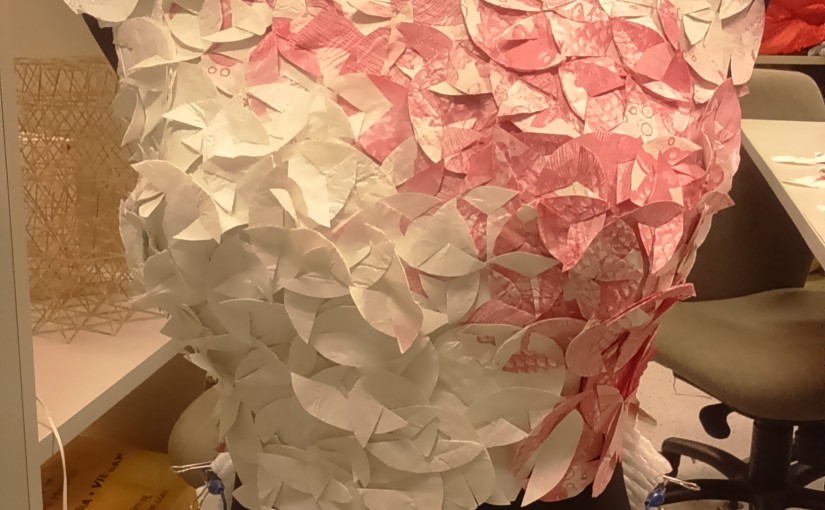 Thanks to the help of app, Aurasma (available both on apple and android)

Augmented reality was easily (and painlessly) implemented onto the garment.  When specific parts of the  dress was “detected” by the app (using a device), images of DIY projects with tutorials taken from various sources online will be displayed. The dress has a total of 6 DIY projects found online. The main driving force for this feature, was to create more awareness about the diversity and availability of multiple resources and tutorials about recycling online. It seeks to encourage and entice the audience into trying out repurposing their “junk” lying around the house. All images were accompanied (hardcopy) with a QR code to the source site and visitors can choose to scan the QR code or follow the link provided, in order to find out more about the project, obtain tutorials, etc. 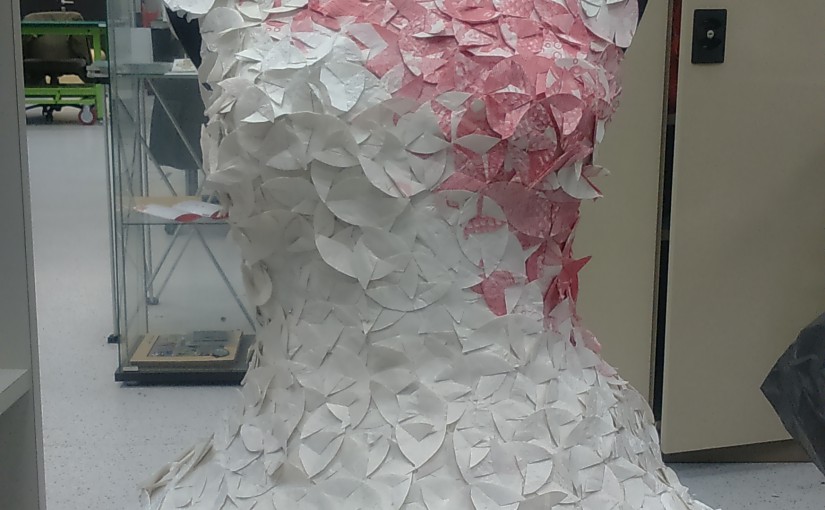 Plastic bags were collected, folded (above) and then fused using an iron (below). For the final design, the colour scheme was extremely specific and only specific shades of colours were used when creating and arranging the garment. Plastic modules were hand cut individually and arranged according to size and types of cuts used (slanted slits, even slits (on each module)). During arrangement of colours , pattern and design of the garment was slowly experimented on and evolving. Plastic foam fruit protectors were used to support the areas of the dress below the waist (due to the weight, modules above the waistline had a difficult time retaining it’s shape and strength). (Above) Due to the weight, the dress was warping and quite unstable therefore a tutu was created and to be added on. Creation of tutu using unfazed plastic bin liners knotted and joined together on a piece of cloth. Dress was stripped from the manikin and strips of fusible interlocking cloth was glued on to make the base sturdier (the bust area had already been glued and secured together while on the manikin). The final design of the garment (before trimming of the tutu).

This project is about recycling the artist hopes to encourage others into rethinking their decision to throw away their “Rubbish”.