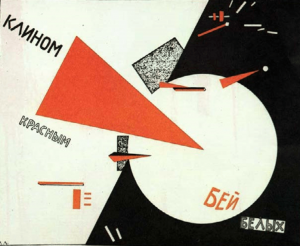 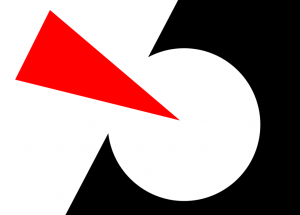 Beat the Whites with the Red Wedge, El Lissitzky, 1919

This is an art piece done by El Lissitzky representing the Russian Civil War. The red wedge represents the Bolsheviks penetrating the White movement, as represented by the white space. I like this piece because of its ability to convey its strong and straightforward message despite its simplicity. The exceptional placement and use of shapes, colours and spaces makes it a very easy-to-understand piece that is considered to be symbolic in Western publications. This piece’s significance is evident in the things it has influenced in the modern context, and one example is the use of the simplified version in a Australian-American television series, Farscape. 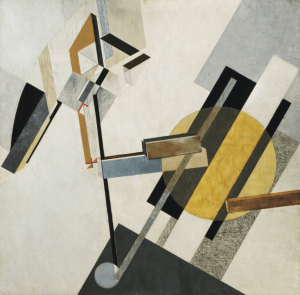 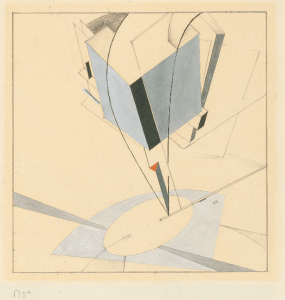 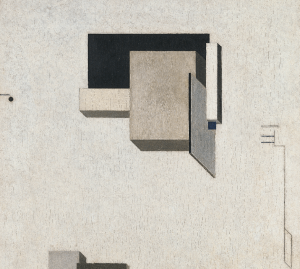 Proun is El Lissitzky’s attempt to integrate painting and architecture together. The word “proun” has no apparent meaning, and is an acronym of the Russian words “PROyect Utverzhdenia Novogo” (Project for the Affirmation of the New). Proun was Lissitzky’s exploration of the visual language of suprematism with spatial elements, axes (lines) and perspectives; which I realise, all of which are now considered basic elements of design. Proun works were three-dimensional environments in which two-dimensional shapes could exist in direct contrast to the space they inhabited. I think this is interesting because this idea of drawing 3D objects on 2D planes is how a lot of us are taught to do to give our works more depth and realism, and I think this concept has come a long way.

Also, really small trivia while researching; El Lissitzky has the same birthday as me. (Maybe that’s why I felt like researching about his works ¯\_(ツ)_/¯)