Upon receiving the brief, the very first thing i did for this project was actually to research on Emiko herself, as well as the world of “Wind Up Girl”. I wanted to really make sure that my design had fit the world and also was able to carry out the functions that it was supposed to, in other words, be a cooling bio-radiator.

Upon research, I found out a couple of things about the premise of this world that Emiko lived in and herself:

With this, I decided to jump right into the project. With the basic knowledge on cooling and heat reduction that i had from my secondary and junior college days, along with certain common knowledge, i knew that the nape was the section whereby upon cooling, would result in the whole body cooling as well.

Thus, i decided from the beginning that i would create a design that involved the neck. Other options such as garters and arm guards, as well as head pieces did cross my mind, however, i felt for the purpose and functionality, the nape was still the best option.

Now, further looking at the premise of the assignment, with Emiko as a sex android and working in a sex club, i wanted to create something that was not obstructive to her activities and also tied in with her job. While it is true that she resents her job, i felt that she most probably had no choice and for something such as a cooling device, she would most probably have been gifted by a customer or provided by her workplace.

Taking into consideration the basic cooling mechanism and the fact that the world was using rather old technology, i was glad that my first section was using black nails, as i felt it fit the aesthetics and the functionality. 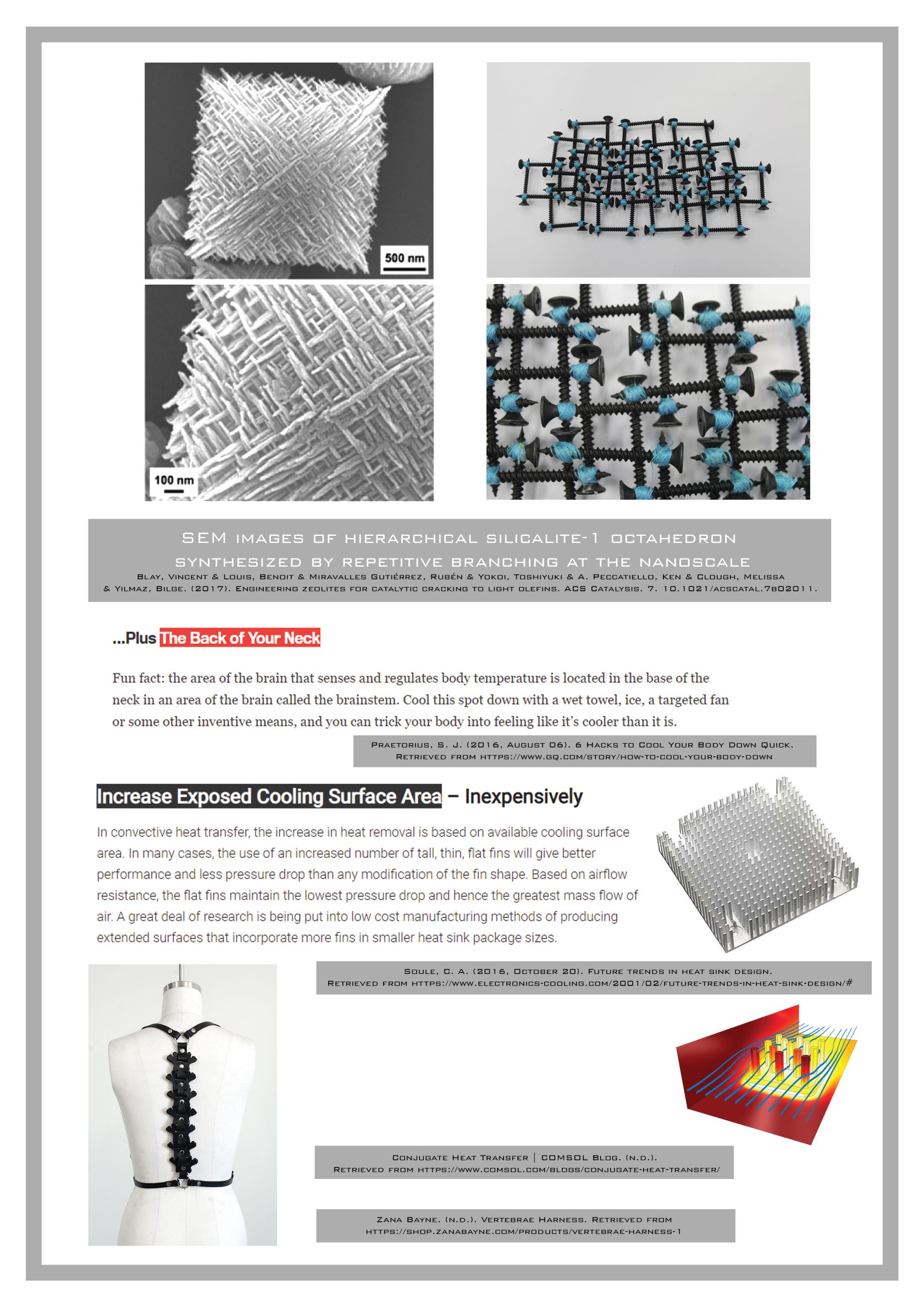 As shown above, my first part involved nails and it was held together with blue thread. We were tasked to find an SEM image and recreate it, however, i personally was intrigued by interlocking mechanisms and thus wanted to use nails and bolts. Upon further thinking, i decided to use thread and nails instead. I hence worked backwards, with me finding a picture to match a possible design that i wanted to create.

I managed to find an image of Silicalite-1-Octahedron, that is synthesized by repetitive branching. I think i managed to recreate the image well and was rather delighted with my result.

Following this, i decided to do more research to ensure my facts were right. A few things i looked up were cooling based on colour, increase surface area and how it results in increase cooling and also which area cools the body the best. Fortunately, my knowledge on cooling were not proven wrong and i carried on with creating a design.

i initially planned to a neck piece, but upon doing research, i chanced upon a spinal harness as shown in the bottom left of the above picture. It was very interesting and captivating. I felt that the usage of the nails were very suitable for this spinal design. This also made me realize that a harness had actually fit what i was looking for in a design.

Hence, i decided to made a harness. 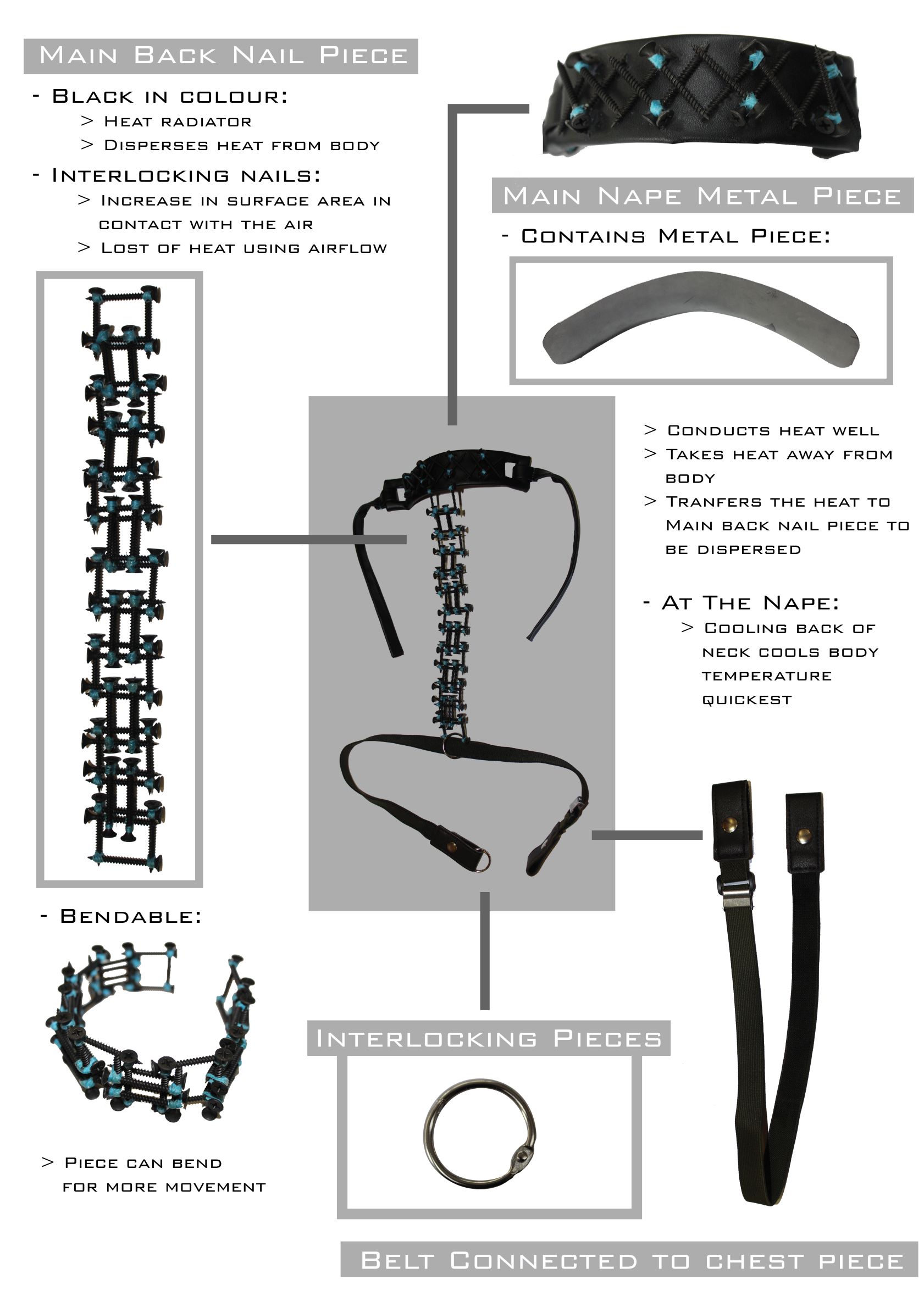 The above is a process model broken down to its separate parts and functionality.

The main gist of the whole device was such that the metal piece that was situated in the nape would absorb all the heat from the body and then transfer it down to the spinal nail back piece, where through the increase in exposed surface area, the heat is cooled down using the second law of thermodynamics. This is of course with the assumption that the surrounding air is cooling than the device when it is heated.

The nape area was also made using leather, imitation leather in this case, real leather if it was actually in Wind Up Girl. The use of leather was due to leather being a cooling material compared to any other material. It was also important for the device to have comfort and thus it was used for the neck area where the wearer would not be pricked by the nails or metal parts. 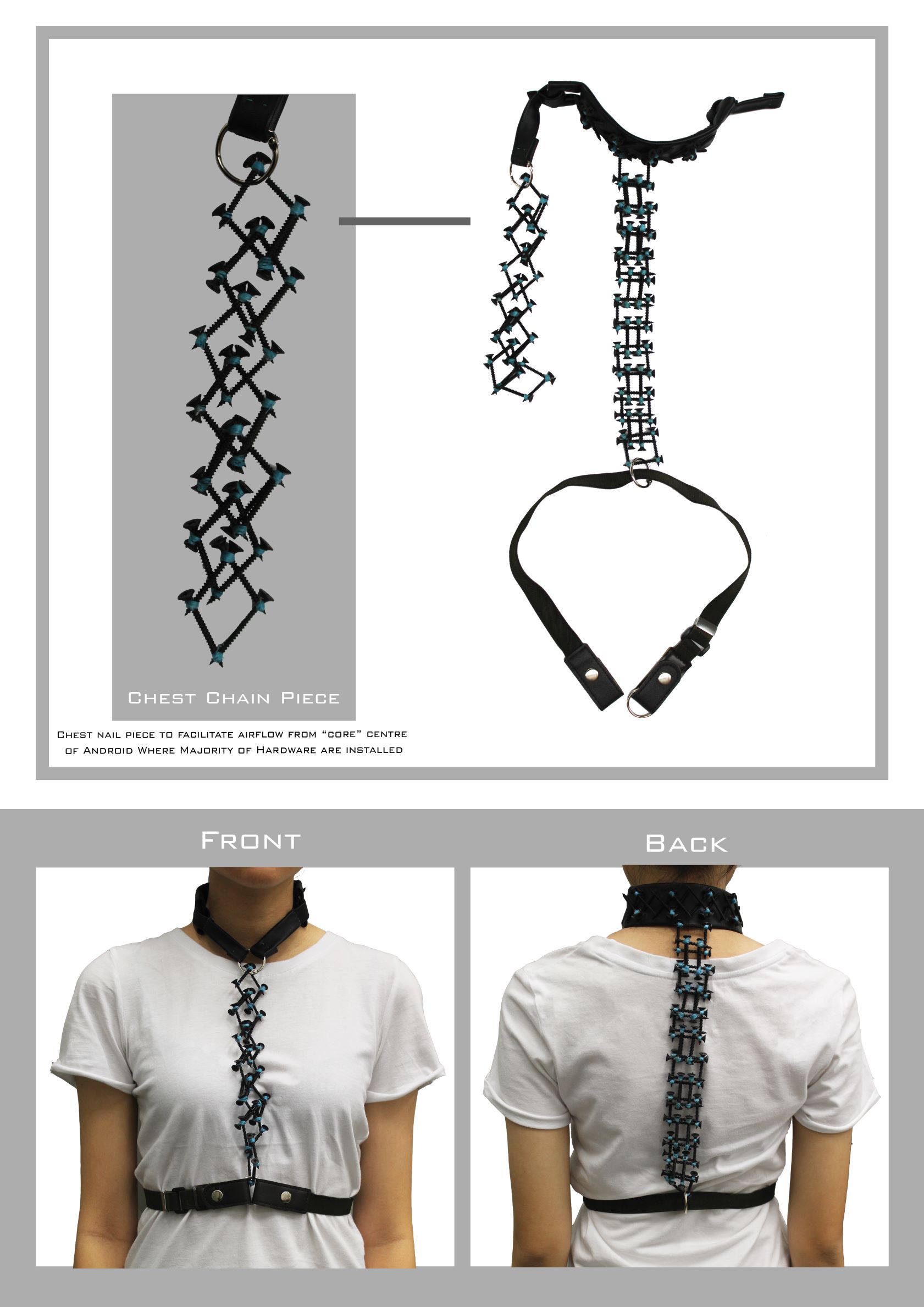 Being a modified android human, I believe that with the chest having the most area and space, most of the parts of the android would be at the chest area. Hence, a chain piece was also added to the chest area as it would most likely have to be cooled down greatly as well.

All in all, i feel the harness is useful in its functionality and aesthetics with regards to the premise of “Wind Up Girl” and Emiko. I really liked how the spine turned out. Through feedback, it was mentioned that the nape area could have also been nails and rather than a single line, i could have played with the design as a skin.  i do concede that the nape could have been nails but i wanted it to have a large surface area where it conducted heat away from the body easily as nails would have resulted in too much free space and hence compromise the function. As for the nails as a skin, it is most definitely something i would look into given the chance again.