Biomimicry works in many ways and thus I decided to split into three sections, namely, Textiles, Function, and Design, though often than most they tend to overlap. 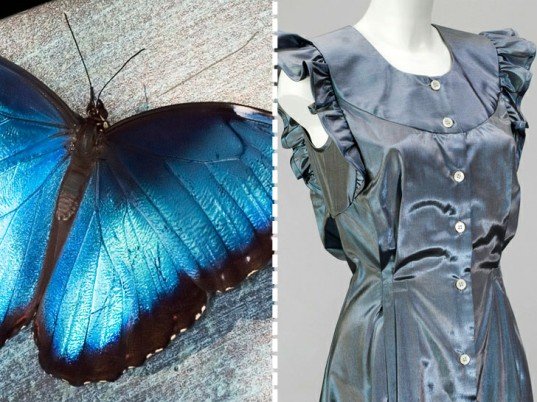 Inspired by the microscopic structure of the Morpho Butterfly’s wings, the textile appears a shimmery cobalt despite its lack of pigment. The dress’s iridescent hue is a trick of the light, and is manufactured by Teijin in Japan.

A native of the South America rainforest, the Morpho is one of the largest butterflies in the world, with wings that span five to eight inches. The vivid colour on the upper surface of their wings is the result of microscopic, overlapping scales that amplify certain wavelengths of light while cancelling out others.

Similarly, Morphotex relies on fibre structure and physical phenomena such as light reflection, interference, refraction, and scattering to produce its opalescence. The fabric comprises roughly 60 polyester and nylon fibers, arranged in alternating layers that can be varied in thickness to produce four basic colors: red, green, blue, and violet.

A group of Pennsylvanians researchers from PennState implemented a new way to produce fabric in order for it to be self-healing and act as a barrier between the bearer and the outside world. By dipping the fabrics in several liquids, they create layers of material that then form a polyelectrolyte layer-by-layer coating.

Similar to polymers present in Nature in the form of squid ring teeth proteins, positively and negatively charged polymers compose the polyelectrolyte coating. These quite amazing proteins already inspired the team to create a self-healing plastic last year.

“ … Fashion can be kinetic, dynamic and almost living expression of our unique experience with nature. I strongly believe that Fall can influence the fashion world to become more dynamic and to increase the way clothes can react to the world around them,” Özkan said. “I want clothing to have more responsiveness to the environment, so that instead of people always change their clothes, the clothes can sometimes change themselves.”

Birce Özkan began the garment design process by asking herself: “What if when the temperature got hot suddenly, our clothes would start to break apart in response? What if they had the skill to behave depending on the surrounding conditions? What if garments had the ability to sense the environment just like living organisms?”

Trees naturally shed leaves depending on the temperature and light. So, Özkan created an interactive garment that does the same. “In the fall, as the days shorten, and the temperature gets colder, the trees, without the light they need to sustain their chlorophyll, shed their leaves to keep their energy to survive for the winter ahead,” Özkan said. “This process was the inspiration for creating my garment’s mechanism. To prepare for the fall of leaves, trees activate “scissor cells” that split to create a bumping layer that forces the leaves out of place, destabilizing them so that they fall.”

Özkan used the same process for her garment that trees use. Light activates small motors in the garment. The motors speed up when there is less light and make the “leaves” fall from the garment. The motors are attached to steel wires, and the wires connect to holes where leaves are attached with wax. When there is less light, the motor pulls the wire which breaks the wax adhesion and makes the leaves fall down. Özkan said she believes the piece will help people have a greater appreciation for the earth.

Birds have a biological compass that tells them what direction to fly during migration. Their compass is guided by the earth’s magnetic field.

“This gives them a freedom that humans lack. Instead, humans become more dependent on their mobile phones to find their bearings. This dependency limits the awareness of their surroundings and denies them of some experiences,” Özkan said.

So she created a jacket that imitates a birds’ internal compass. The jacket uses an electronic compass and embedded motors that make the feathers on the shoulders rise up when the wearer walks north.

Black cockerel feathers are attached around the collar of the jacket and fully cover the skirt. Both are made from a dark cotton-based material and feature an integrated electronic compass, which is connected to motors on the end of the feathers. When the compass detects that the wearer is facing north, the plumage is raised up by the motors to look like a bird flapping its wings.

“During my research, what I found out is that when humans lose their way, the easiest way to reorient themselves and find their way is to face north and visualise the map,” Ozkan told Dezeen.

“If the wearer loses their way, the skirt or jacket helps to find where is north and then when they face their body north, they visualise a map and can navigate based on memory.”

The next step for her Augmented Jacket and Skirt is to link up the clothes with Google Maps so the feathers respond to programmed routes.

The feathers on the left side would flap when the wearer needs to go in that direction, and the opposite side for turning right.

“You can write down the address and then the feathers will guide you if you need to turn right or left,” said Ozkan. “In that way, people don’t have to be dependent on their mobile phones and can be more aware of their surroundings and allow them some experiences.” 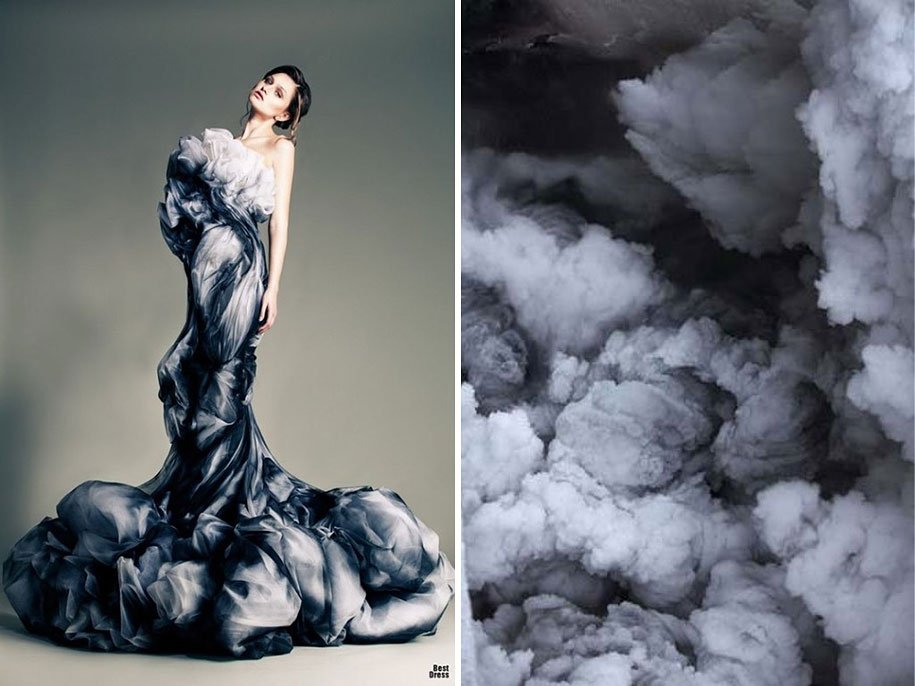 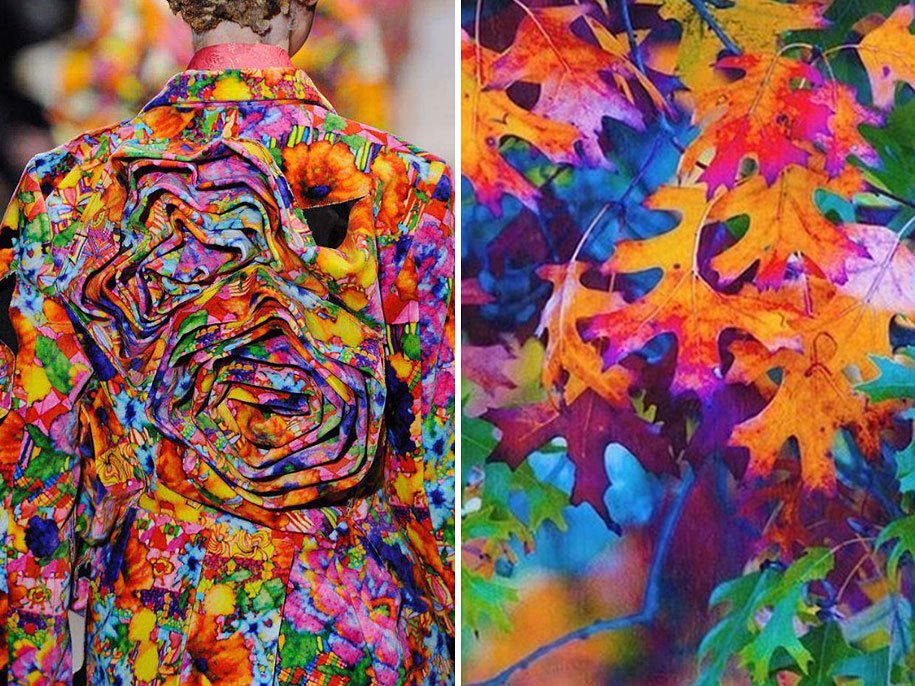 Her collection came cut in classic menswear fabrics like houndstooth, pinstripe, and Prince of Wales but also in those reminiscent of “Beetlejuice stripes” or cartoon bright floral prints that could be found in a kindergarten.

From there Kawakubo played with volume and proportion to create another one of her customarily challenging collection.

So that a suit would show up with whorls of abstract fabric flowers swelling out of it, a jacket would feature odd shaped inflatable balloons in a matching fabric that would incased the sleeves or the shaggy layering of strips of fabric was another way the designer also bulked up a few of her ensembles. And the idea to flatted the pants between the legs (as if the models were using their thighs to keep them hanging straight) was so off the wall only Kawakubo could pull it off. 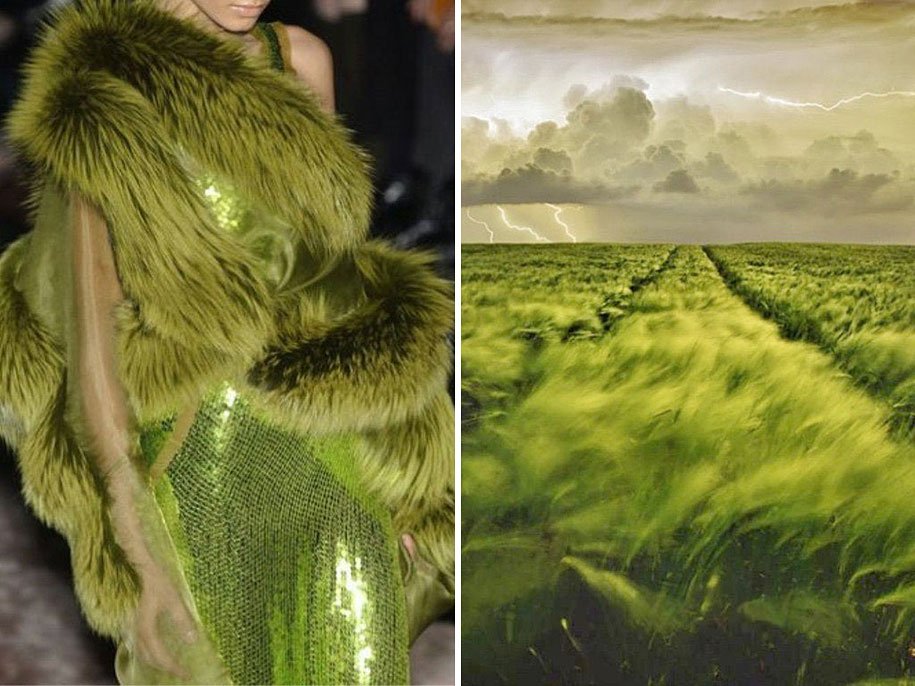 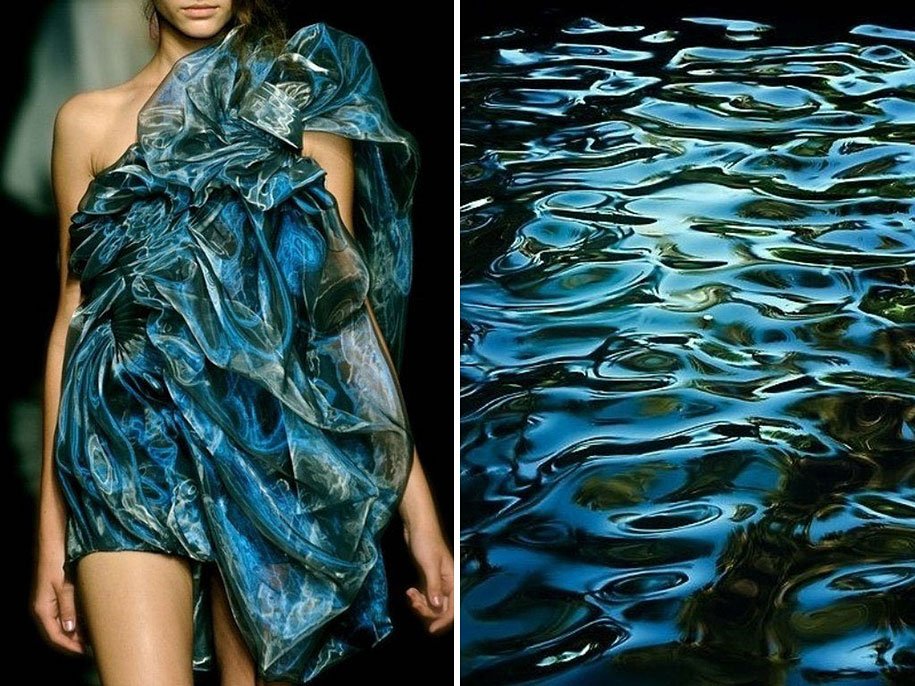 The designer’s hand remains assuredly her own throughout excursions into bold and new galaxies of ever-shifting shades and shapes where tones blend and merge. Red remains pure while a slate grey betrays celestial glimmerings. Silver and blue fade into one.

Inviolably light cascades of satin and muslin offer oblique suggestions of chasteness through their mounting layers.

More of her works