Both exhibitions, An Exercise of Meaning in a Glitch Season and Time Passes, were extremely interesting and eye-opening for me. There a variety of mediums, as well as a large range of ideas brought up in the entire exhibition through many works. It was a good experience seeing how certain materials were used and manipulated into works of art, and how many of them mixed traditional and digital into a cohesive project. It was interesting to hear how the curators chose the works, and the problems they faced in the exhibition set up process.

All the works were well-thought out and gave food for thought. It opened my horizons to the art scene in Singapore, and made me realise the amount of unique and brilliant artists there are in Singapore. It was fun to see some works bring in the Singapore context, with works relating back to places we live or things we use. At the same time, many works also touch on issues on a global level, as well as personal level. 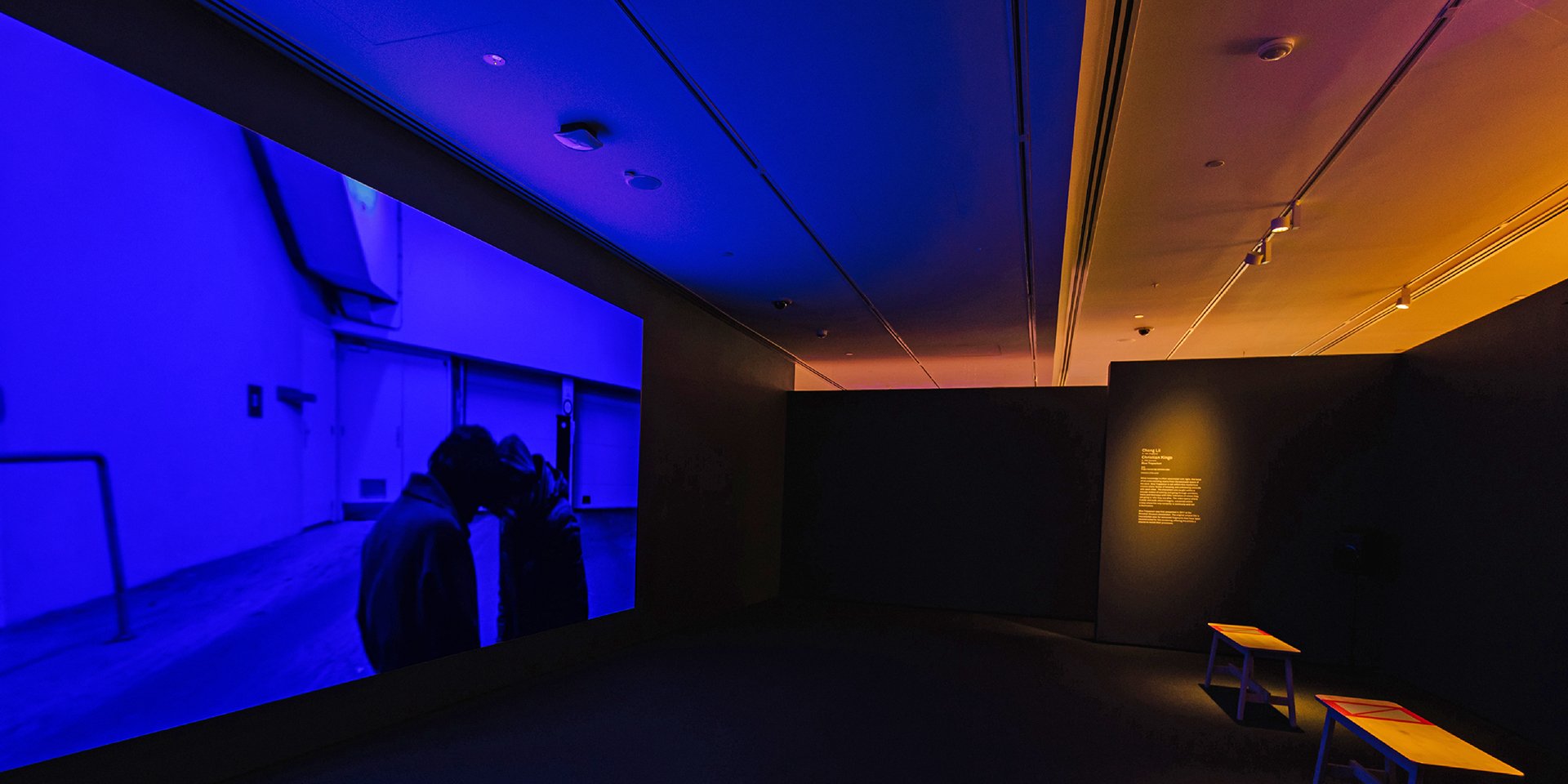 Among all the works presented, one work that really caught my attention was Blue Trapezium by Chong Lii and Christian Kingo in Time Passes. It is a 30 minute HD video, projected onto the wall. Opposite the projection are 3 seats, with speakers on each side. The area is dark, and is found hidden behind the exhibition’s description wall, unlike the other works that are openly displayed. The work being separated from other works allows the viewers to be fully immersed in the film, as they sit in the dimly lit screening area.

The reason why I chose this work was because of how I was so absorbed into the work when I watched it. More often than not, while I was amazed by works, I often still felt more like a person watching from the outside, in a sense that it was me realising how I was supposed to feel from watching it rather than feeling that emotion itself. Yet, for this work, it truly tapped into my mind, and made me feel things I never expected to.

Blue Trapezium is a film that, based on the Singapore Art Museum’s audio tour, :

“…explores the peculiar location and role of the brain in every human body. Knowledge is often referred to as the “light” that dispels darkness. Yet, this knowledge, or ability to understand, is located in the “dark” crevices of the brain, which itself resides in the enclosed space of the skull. It is from this location that physical actions and mental processes are initiated for all humans. However, each individual has their own unique perception, memories, and interpretations. Blue Trapeziumis set in a nowhere place. We follow the characters in the film as they move through hallways, doorways, television screens, indoor and outdoor spaces. The characters flow in and out without a link to each other and with no clear story line. There is a fragmented, endlessly shifting context, while the sounds, colour, pauses and pace of the narratives add to the elastic space created in the artwork.”

True enough, as I watch the scenes in the film, they do not make any narrative sense, and feels as though they are cuts of different videos pieced together. Some scenes feel as though I am watching a film or movie, while others feel like a memory, or a vision. Some scenes in particular really moved my heart and mind as I sat there for about 10 minutes just watching the film.

One was of a person next to a window being lit by passing neon lights as loud classical music played in the background. The scene was ethereal and brought memories back of when I sat in trains or buses for long periods of time, listening to music from an earpiece, blocking out any other sounds. The feeling of being detached from the world, watching it pass by, was quickly brought out from the depths of my mind as I saw the scene.  The fact that the video could touch memories and feelings so specific within us was extremely incredible and I felt the film managed to achieve what they aimed for.

Another scene was of a lady walking through a corridor with flickering lights. This paired with the dim lit projection area was a unique combination that aided in the effect it had been trying to give. As the lady walked “towards us” in the film, the lights suddenly went fully out. Sitting alone in the area watching the film, the sudden darkness caught me off guard and I loved the idea of the film feeling so alive and how I felt I could connect with a video that displayed on a flat wall.

The film continues to show different scenes that trigger memories and feelings from within the mind, making it an extremely captivating and engaging video.

Likewise, in the works that I make, I hope to achieve the effect that the film was able to do. Using interactive elements, combined with my product design, I hope to make works that can reach deep into the minds of people. I do hope to continue learning more about the human mind and brain, and study how we think and act. 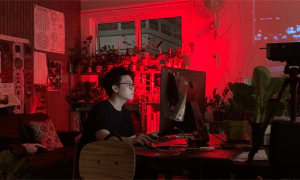 Chong Lii is a Singapore artist who studied in the Gerrit Rietveld Academie of Amsterdam, New Zealand.

Chong Lii’s work aims to explore the possibility of merging or levelling disparate spaces, objects, people, and images. Permeable frames of history and ontology are set against the spectacle of fiction, re-articulating the sociopolitical tensions from which these elements arise.

Singaporean millennial fantasies, accidental occult tributes in digital media and imagined historical subcultures are among the subjects filtered through an idiosyncratic gaze that supports and undermines them in equal measure. Operating alongside strategies of complicity and dissent, his installations and films simultaneously counter and revel within the apparatus of the moving image.

Christian Kingo (b. 1993) is a Danish filmmaker born and currently based in Copenhagen. Contemplating notions of belonging, his work investigates subjects of cosmopolitism, nostalgia and the domestic. These concerns are reshaped by elements from science fiction and horror, rendering narratives within disorienting environments. Grounded by traditions of cinema whilst pushing to defy its genres and formats, Christian works primarily in video & sound installation, live sound performance and film.