After reading this article, I started to ponder on the public spaces and sidewalks in Singapore’s context. Evidently, how we utilise our public space is very different from HCM; for example, our culture of having street vendors have long ceased, with occasional exceptions of ice cream bikes at situated locations.

Annette Kim mentions public space as both a physical and social construction, and thinking about the point where she brought up certain instances where paper proposals would not always work out when put to practice, I thought about an incident that caused an internet uproar earlier this year. To many of us Singaporeans, we grew up in HDBs, and void decks have always been an informal but important place for gathering and play. 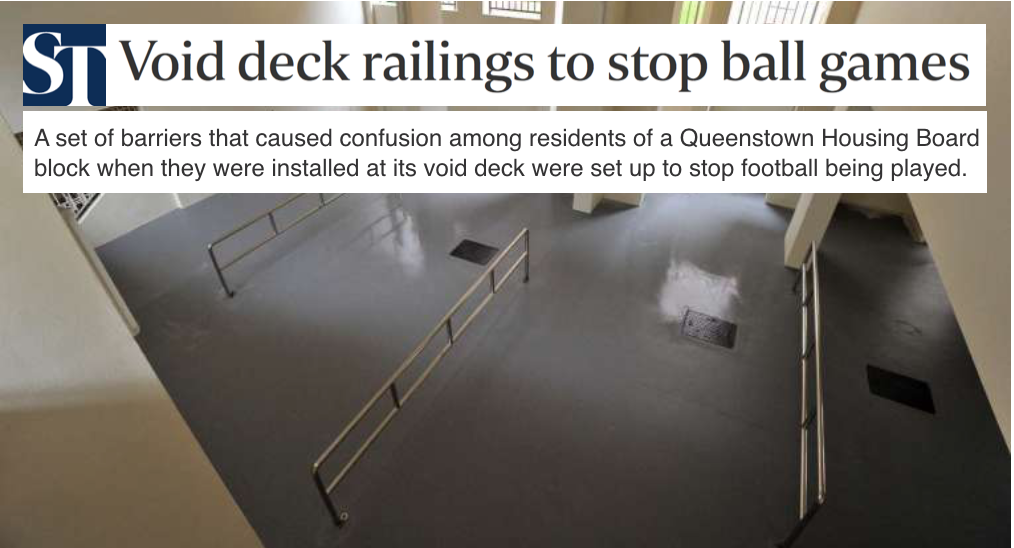 However, in a Queenstown HDB, barriers have been set up in the common space that we are familiar with to discourage ball games, and this confused a lot of residents. Some one even commented that the space “originally filled with so much potential for use and creativity, is now effectively transformed into a dead space.” The internet has been responding to it, from different complaints (http://mothership.sg/2016/02/netizens-not-sold-on-railings-erected-to-prevent-football-playing-in-void-deck/) to jokes (http://sgag.sg/posts/break-neck-news-railings-installed-at-void-decks-to-create-more-mini-football-courts) made out of it.

I also particularly enjoyed the example she brought up about how the areas in front of “fancy shopping malls” turn into recreational space for our immigrant domestic workers on the weekends. This has also been a debatable topic here in Singapore, on whether the domestic workers may be causing a nuisance or adding life to the city.

The following are the question I had after the reading: