Designing for the digital age, how to create human-centerer products and services

I really appreciate how Goodwin provides a differentiation between design from arts and science in the introduction of the chapter. It has been a point that I strongly stand by – that art and design are not the same. Design is not to be confused with art, and what sets design apart from art is that it must serve human needs and goals. All designed artefacts have a purpose, such as to increase efficiency, effectiveness of human processes. With that being said, design will always happen within constraints that are not to be dismissed. In my opinion, these given constraints may also contribute to one of the factors to differentiating between art and design. These constraints are also often factors that “regulate” the design process.

Similarly to the reading in week 6 that implies that there is no “perfect” design, Goodwin suggests that each individual brings his/her own attitudes, behaviours and perceptions to any situation, and therefore no designer can determine exactly what experience someone has. Therefore it is important for the designer to keep an open and critical mind throughout the design process.

Part 1: Write a response to the exhibition “Future World”.  Keep in mind the following questions – What is experience design and what are the possibilities of responsive environments? How might this change the way we think about the world around us and the ways that we communicate with each other?

The visit to the “Future World” exhibition was a really fun and enjoyable one. It was truly immersive and interactive, and for that it was able to capture the attention of not just us designers, but also the general crowd (and also the children that was playing with the installation)! Also, with also a member of TeamLab to show us around, it was an eye opening experience. We are always only exposed to only the final execution of an idea (i.e. seeing the final installation), but having him share with us the initial concept developments and understanding where the motivation for the installation came from was a valuable experience. In most of the installations, the responsive environments were also immediate and obvious. This made sense so that people understood how their movement/actions could contribute to the environment. For instance, as part of the digital playground, in the interactive theme park installation, viewers easily understood that each drawing scanned would then exist and live in the virtual theme park played on the screen. 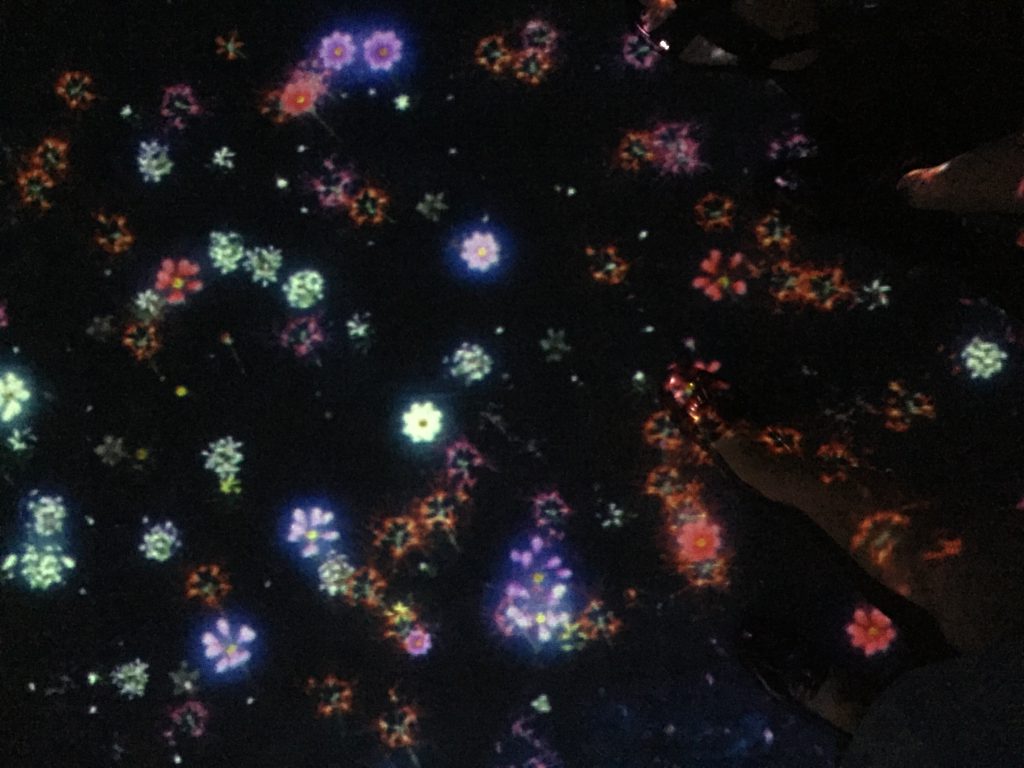 It was then particularly interesting for me to see how some of these virtual feedback would be more subtle. In the first Flowers Bloom installation that we visited, various of these virtual responses from the environment would not be picked up by the viewers if they did not spend enough time in the exhibition or if they were not attentive enough. Some of these detailed responses include the butterflies falling apart once they were touched, and that if an individual were to stand still at a particular spot for long enough, flowers start to bloom around them. These responses were very layered and sometimes difficult for a passing viewer to notice.

As per all designed materials, certain consumers’ behaviour would be encouraged. With responsive environments, it brings these encouraged behaviours into a physical space. For example in the Flowers Bloom installation, the viewers would understand that their movement causes the flowers to be dispersed by seeds, they would then be inclined to stay still in a area tohave the flowers blossom around them. Or for instance in the digital playground, the children know that it is different from usual art exhibits, and that it is their time to play or run around to collide the balls, simply because of the feedback they receive with their actions.

In a way, these responsive environments temporary shapes the behaviours that the viewers engage in while in the designed space.