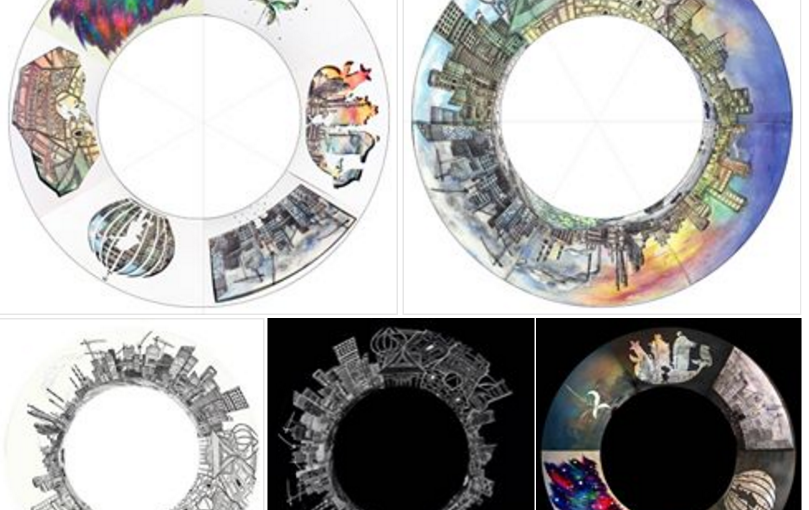 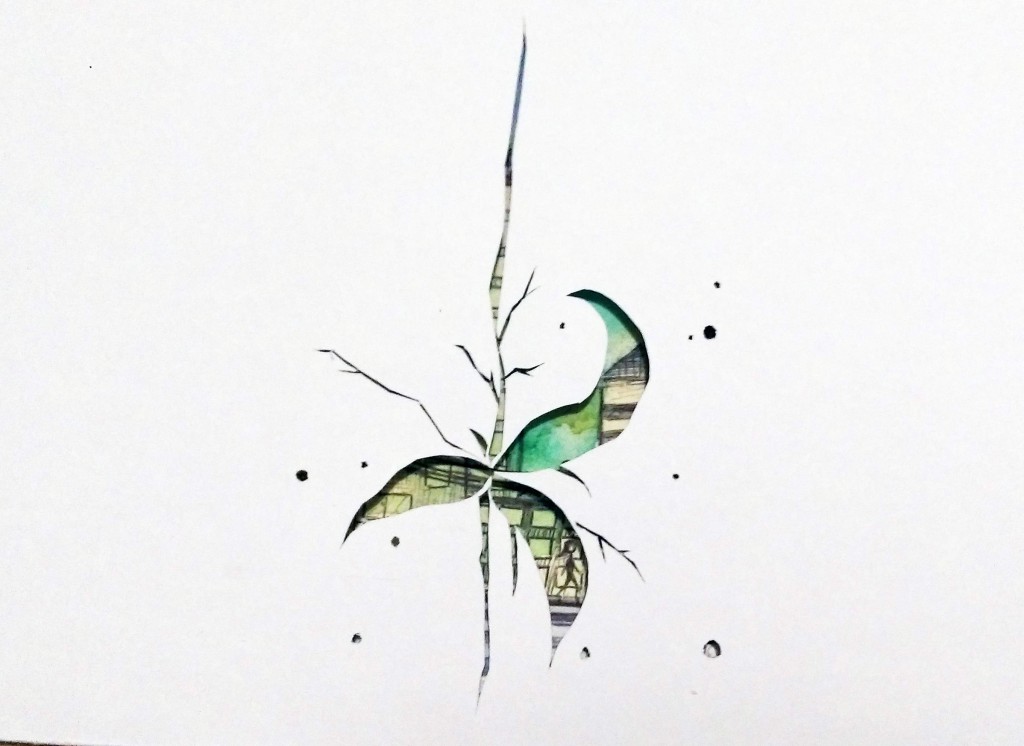 A City from the Point of View of a Weed is a Struggle.

This is actually inspired by something I wrote a long time ago, comparing a person in a city and a weed growing out of concrete, thus the positioning of the paper cut out such that a small person is visible as part of the weed. 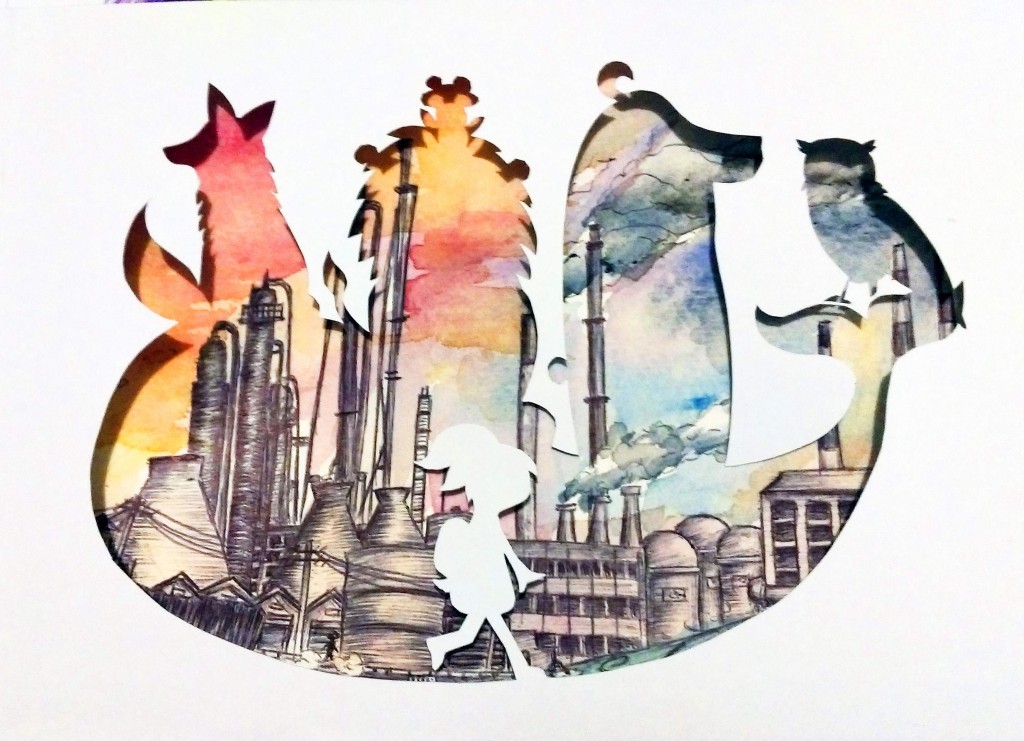 A City from the Point of View of Animals is Poison.

Needless to elaborate, about pollution. 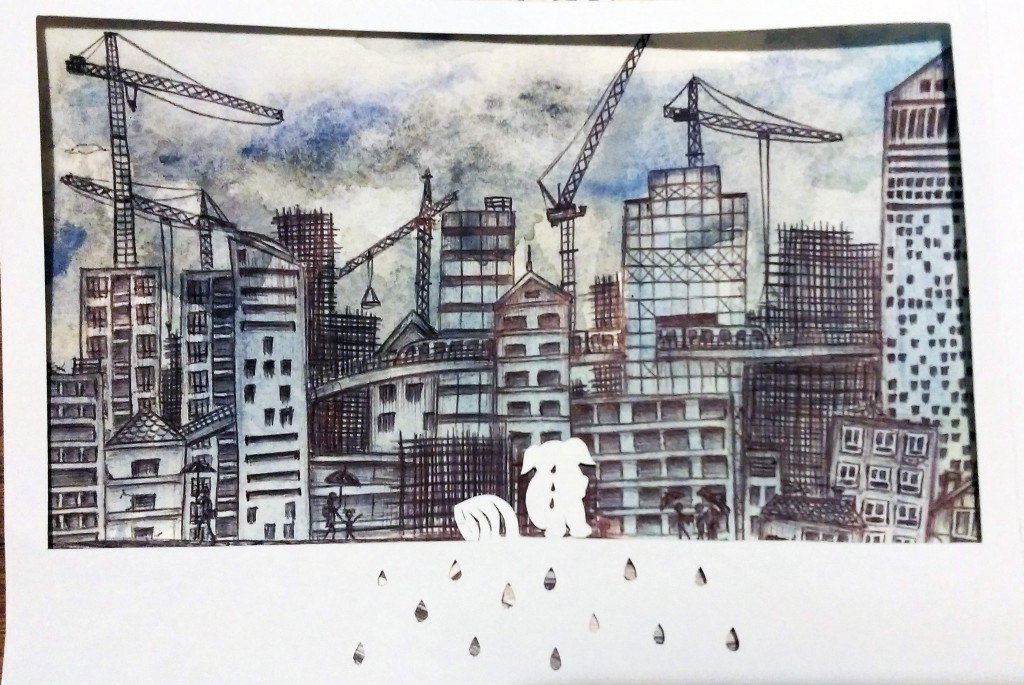 A City from the Point of View of a Migrant child is the Unknown.

Here, I wanted to go for the effect of the buildings towering over the child. The gloomy atmosphere is such that I focused more on the negative aspect for a child to migrate… I considered other words like “Loneliness/Not Home” as well, but in the end settled on the more neutral “Unknown” because it will be an exaggeration and almost a lie to say that there are no positive aspects of migrating either. Such as Hope and Opportunities..

The constructions in the background mirrors how a child’s changing and growing state, especially after a drastic change in surrounding. I feel it is most suited to express the dual meaning of “Destruction”, noise, overwhelming changes, but perhaps also the new “Possibilities” thereafter… 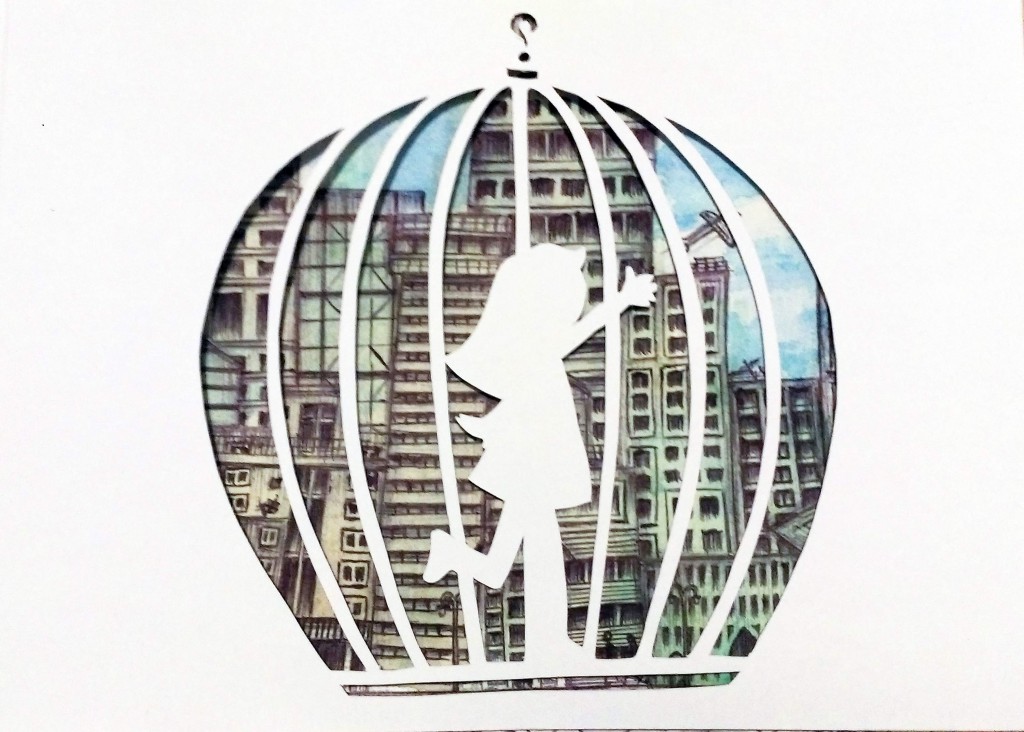 A City from the Point of View of a Wanderluster is a Cage.

The perspective is that the “Wanderluster” has yet to become a “Traveler”. Although the towering buildings are again used to indicate being overwhelmed by the city, I think when the concept of “Cage” came up, I refer more to the duty and responsibilities someone has to endure to live in a modern and developed city.. 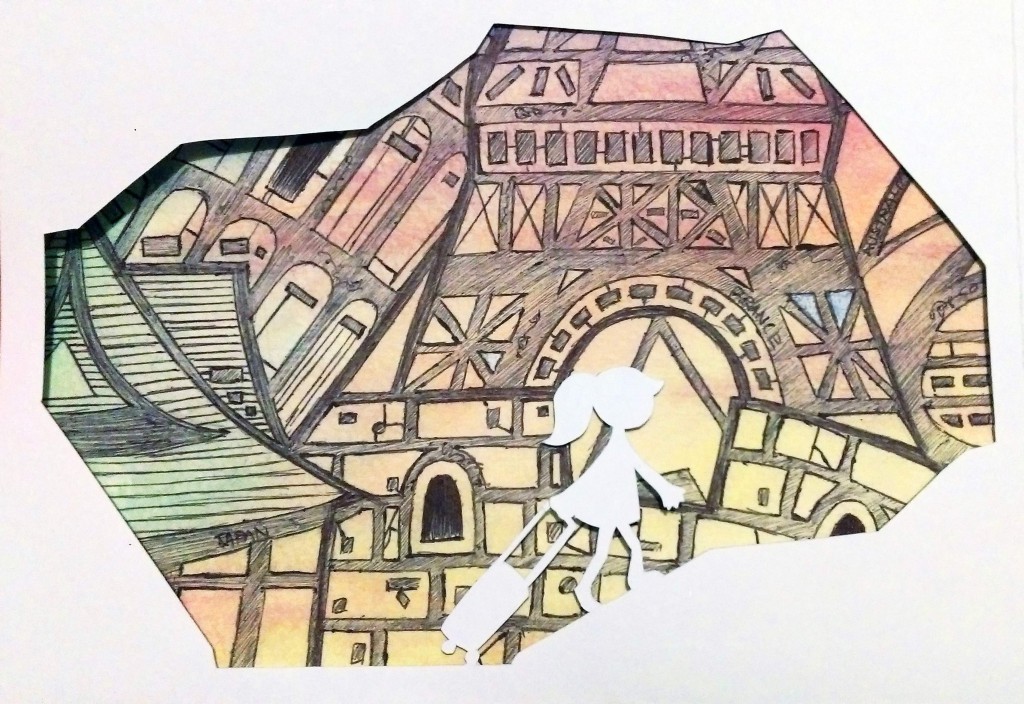 A City from the Point of View of A Traveler is a Map.

Pretty straight forward. The art style however changed a little because I wanted the buildings themselves to resemble a map~ 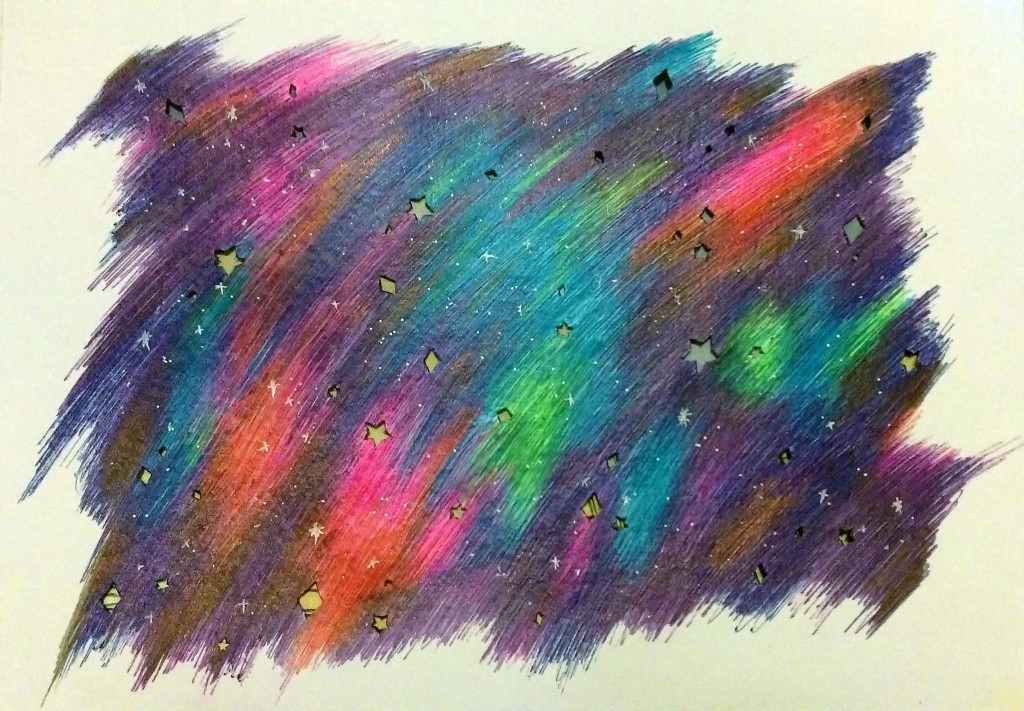 A City from the Point of view of the Universe is Nothing.

A bit of contrast from the first one (Weed) going from the micro to the really macro perspective. And maybe also just a tiny bit of mockery towards human accomplishments (and failures~).

But really the execution of this last one also came from something I wrote long ago, comparing the light of a city to stealing the star light off the sky… 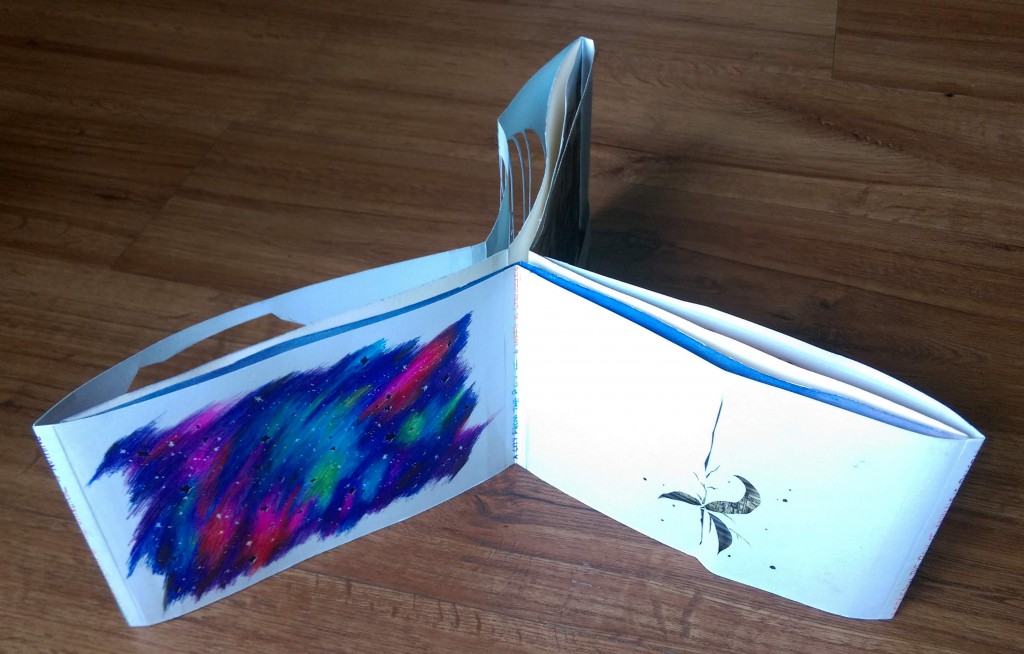 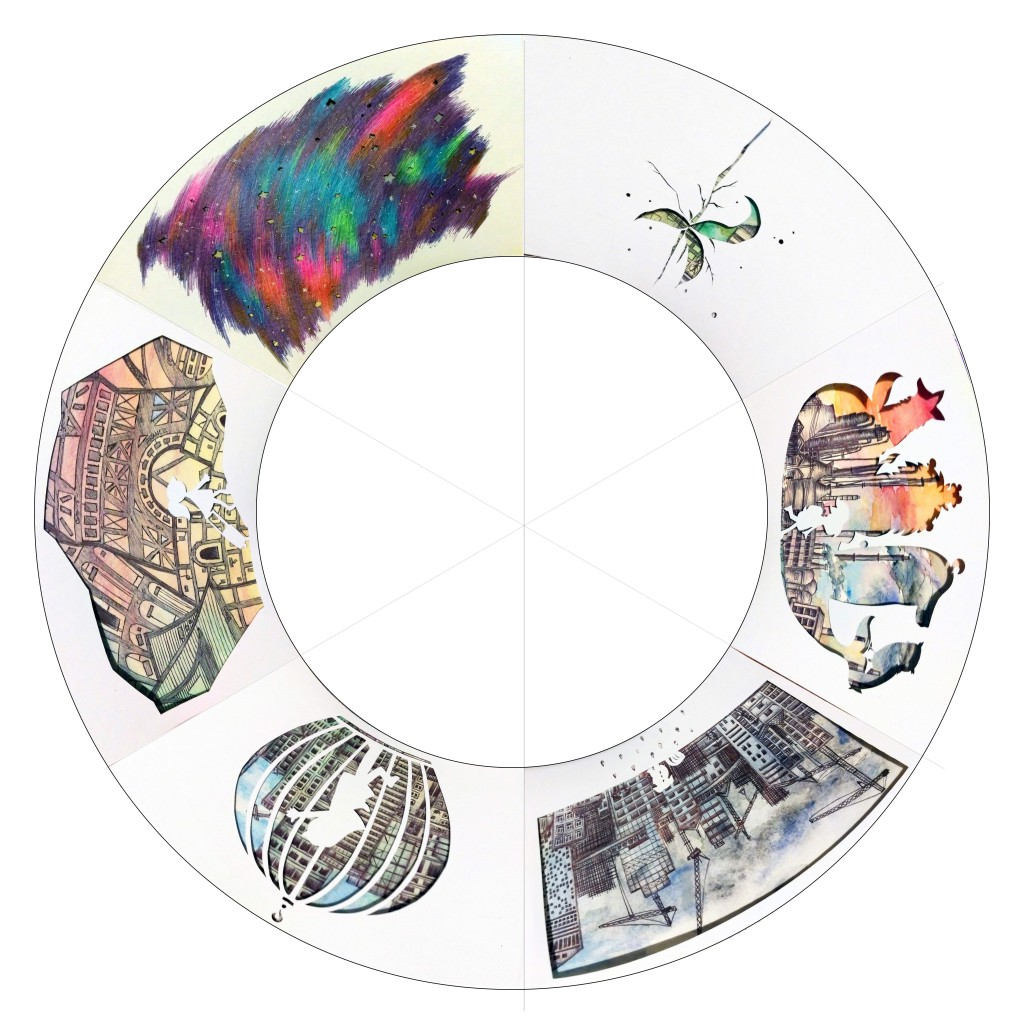 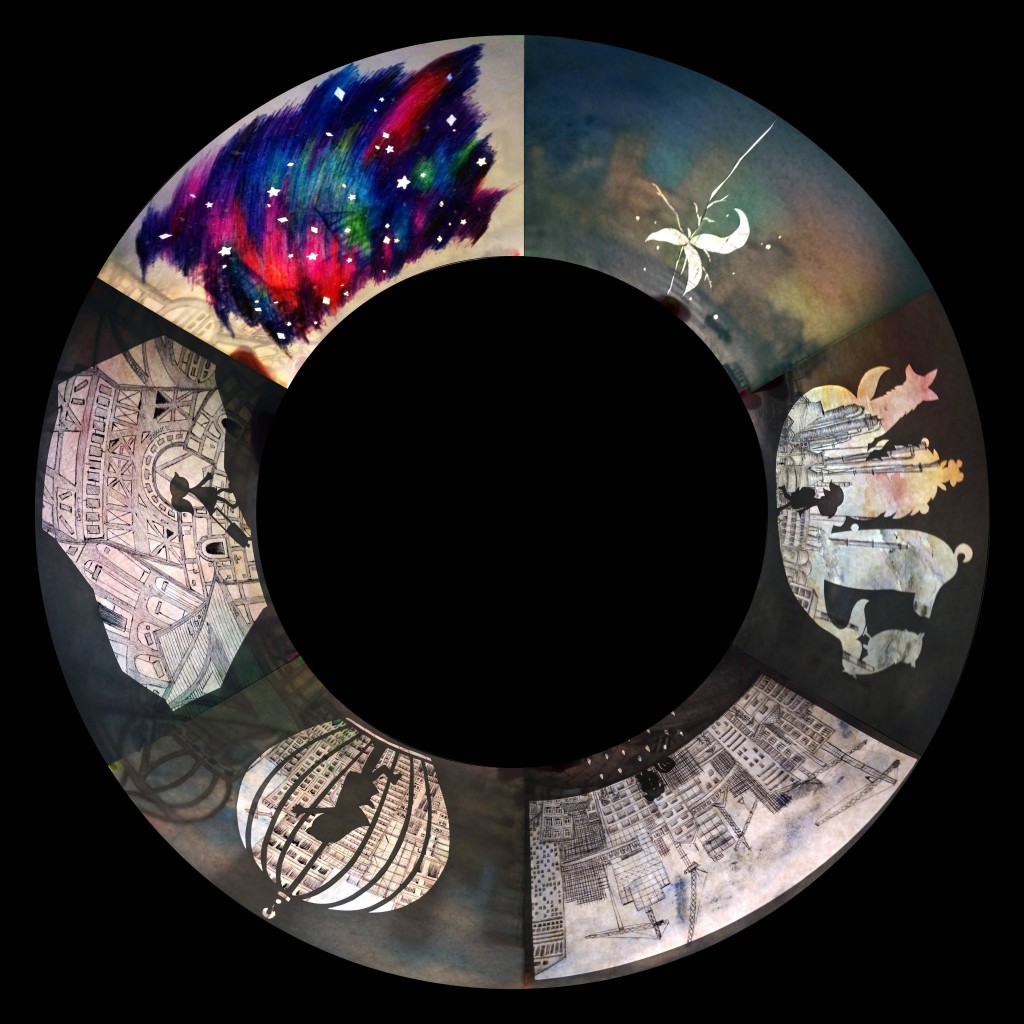 Bonus back-lit version~ The photos doesn’t do it justice, but I think if given the time and ability I would like to have set up my final presentation with the artworks in a loop, and lights in the middle. It works especially well for the “Universe POV” but even for the rest, I always like to use lights when I do paper cuts because it shows the layering very well..

Honestly the “looped” version here is closer to my original idealized final mode of presentation, and I am very happy with how it turned out ^^

One thought on “POV: Final City!”