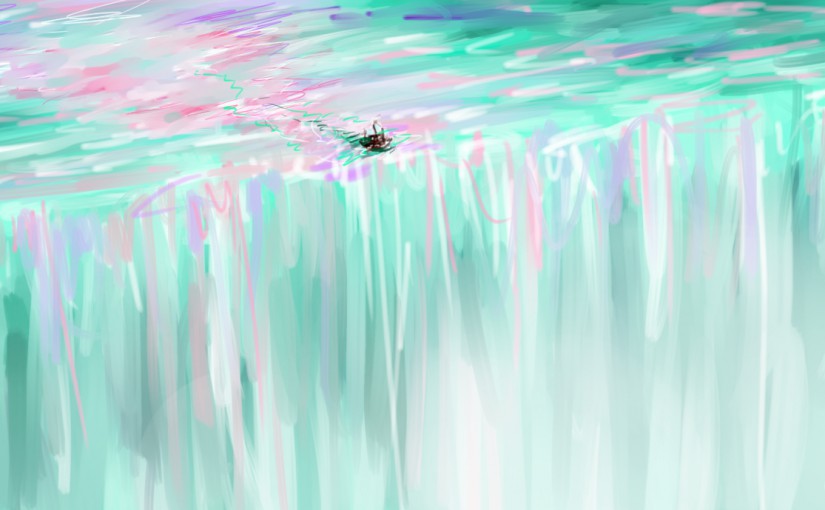 It was right before sunset when the sea dipped like a waterfall.

The mist before them had taken the pale tint of purple and the fading pinkish greenish hue of the darkening sky, and before they realized, the hazy horizon line had come unusually close to the ship.

Though panicked, sailing for 15 years provide most of them with ample experience reacting to the unexpected. All capable individuals got to their allocated positions where they knew they would be most useful as a member of the crew. The Giowels working their magic on the sails, wind and water current directions, some Tierans providing back up with their potions and strength where it is required. The rest of the people concentrated their efforts on the ship’s mechanics should that be their expertise.

They stopped the Ship from tipping over the edge with herculean effort.

As a few stood and observed the cause of their predicament, the silhouettes of architecture and light peeks through the dissipating mist, yet it is impossible to know the full depths from which this city arise. Those with binoculars, or just binocular eyesight, seem to identify shadows of people visible through the thick mist, igniting murmurs of excitement amongst the passengers.

Yet, the Chiefs (2 Human Leaders, 1 Giowel Elder and 3 Tieran Shamans) swiftly and unanimously agreed that they should leave this unusual city behind.

It is too different from the land they were accustomed to, and they it is too dangerous for all of them to attempt getting off the Ship without ascertaining what kind of city lies beneath.

It will be way too strenuous for the Ship to remain where it is for more than half an hour without being dragged by the currents off the edge of the falls, and even with the unique potions of the Tierans, the Giowels cannot sustain their magic forever. It is in their best interest to turn the mast as soon as possible… while they still can.

However, unbeknownst to the excited crowds and the worried Chiefs then, two of their kin has already gone off the Ship.

How did Beam and Dom get off the ship and into Danraxelia (the city)?

(OOC: The Chapter ends when you both are settled into the city. I estimate 2-3 comments required each, please and thank you~ ><

(OOC edit: It seems having you both settle in in chapter one is a bit ambitious, so getting off the ship is progress enough~ Will continue in the next chapter! Thanks~)