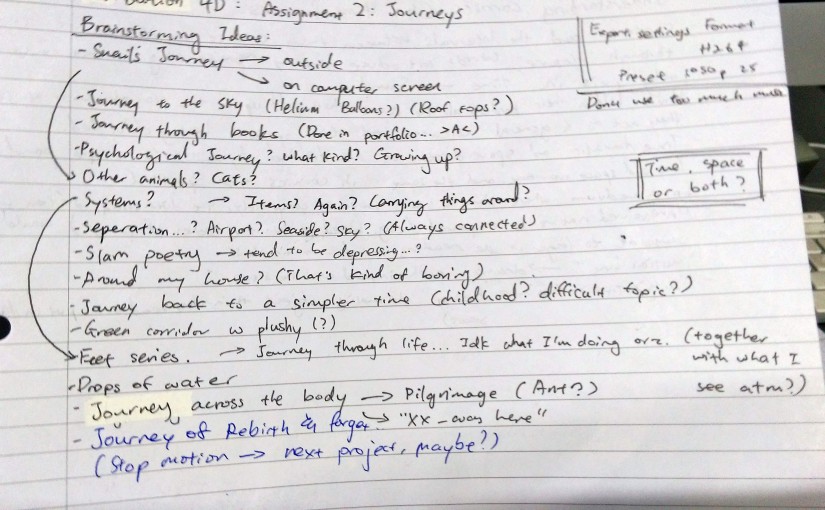 Featured image is, again, my brainstorming list. It went from I have no idea what I’m going to do, to I have too many ideas, back to I have /almost/ no idea because I didn’t really like any of my ideas.

One involved Green Corridor, or the “Wild place” as my friend and I used to call it. I had a vague idea that I want to take photos of plushies in the jungle/foresty place (And I still do), but I had no solid plot (This is going to be a recurring problem..). I did not find any of my plushies suitable, not any props since I had. No. Plot. D< I wanted to play with the idea of the body as a temple, so going through part of the body (scars and markings..) would be a pilgrimage of sorts, and likening the body to some sort of landscape.

I really like the idea, and I attempted some shots. Unfortunately I was not entirely comfortable with the execution of the idea in more than one ways… plus I would prefer to use a better camera (Macrophotography) which will be difficult for me to use at my current skill level >A<

I also briefly considered the idea of books… again. Link to what I did for the similar topic for the the portfolio application earlier in the year.

It’s more of photomanips, so I’m not sure how suitable it’ll be. Plus, I felt a bit redundant when I keep using the same subject matter in my works, so it was swiftly rejected.

In the end, I decide to try something I have never done before: “system” work.
It’s inspired by the artist Prof showed us in class, Tehching Hsieh’s “Lifework”

It was, in a way, simple. I take two photo once every waking hour for a week, one of my feet, and one of whatever is in front of me. The journey is, of course, just my life.