Danraxelia is just one city in this world (The world is called Vo’a; but this probably will not be very important in the subsequent story)

In their homeland, they have a variety of different ships by different races and different purposes, but it has all been left behind.

That is the ship that they has been on for 15 years, and we can look at it as an example for how different races help to operate a ship.

It is a privately owned ship, and when the war escalated in their homeland, the owner (a Tieran) offered to take in as many refugees as it can possibly support to seek a new land.

Of course, individuals or groups who can aid in the journey were prioritized, as well as important people such as the chiefs.

The main division of crew work in the ship is as below:

Mechanics maintenance: Dominated by humans, sometime the help Giowels are required for their generation of power (water and fire, mainly.)

Doctors and Alchemists: Mainly Tierans playing a large role in creating potions that could help Giowels recover their elemental essence.

Wingers: A small (~50) but special group of older (60+) Air elemental Giowels in charge of the wings of the ship. These are literal wings build into the sides of the ship.

Essentially, the wings catches the air currents the Giowels will generate beneath the ship, and levitate the entire ship out of the waters. Other personals will use their respective capabilities to help redirect the course of the ship. This is an emergency measure, for example, when they might crash, or gets pulled into waterspouts… or the waterfall approaching Danraxelia.

Although most jobs seems predominantly done by one race, the knowledge required for the jobs are not race exclusive, and at least the basics of a job could be picked up by any race.

The possibilities of transport under water has been explored only to a very limited extend, as they use to have contact with Tierans that lives underwater. Water elemental Giowels can also stay underwater for an indefinite amount of time.

Unlike the sea which is usually more calm, the skies are a much more dangerous place. This is due to the fact that most of the time, it rains sand here instead of water. The equivalent to snowing and hailing would be raining pieces of glass, which needless to say, proves a terrible threat to any aviation in misjudged or unpredictable weather.

This combination of gas, sand and glass in the “clouds” also makes it extremely dangerous to go too high up, as some Tieran capable of flight has found out under certain unfortunate circumstances…

Anyways, in this way, most residents of Vo’a has also developed a deep respect for the skies. Aside from Tierans born with the animal ability of flight, not even normal air elemental Giowels are capable of flight for any extended period of time, as flying are extremely essence draining, with mere levitation already draining 1 essence per minute.

Thus, it is much more efficient for Giowels and Humans to use tools such as hang gliders for short distance flight, where air Giowels have the added advantage of simply creating gust of wind to direct and speed up their flight.

On rare occasions, Tierans have tamed huge winged beasts to provide transport in the air for friends of other races, or for trade. However, it is not possible to bring any of them on the ship for 15 years.

Danraxelia layouts are pretty vertical, thus, lifts are actually a main form of transport. There are a few main lifts that passes through most of the levels inside Danraxelia, with a strict time table akin to buses and trains in our world.

Countless small lifts that function more akin to known lifts in our world also exist in various alternate levels. For example, only between the 9 levels of living area. 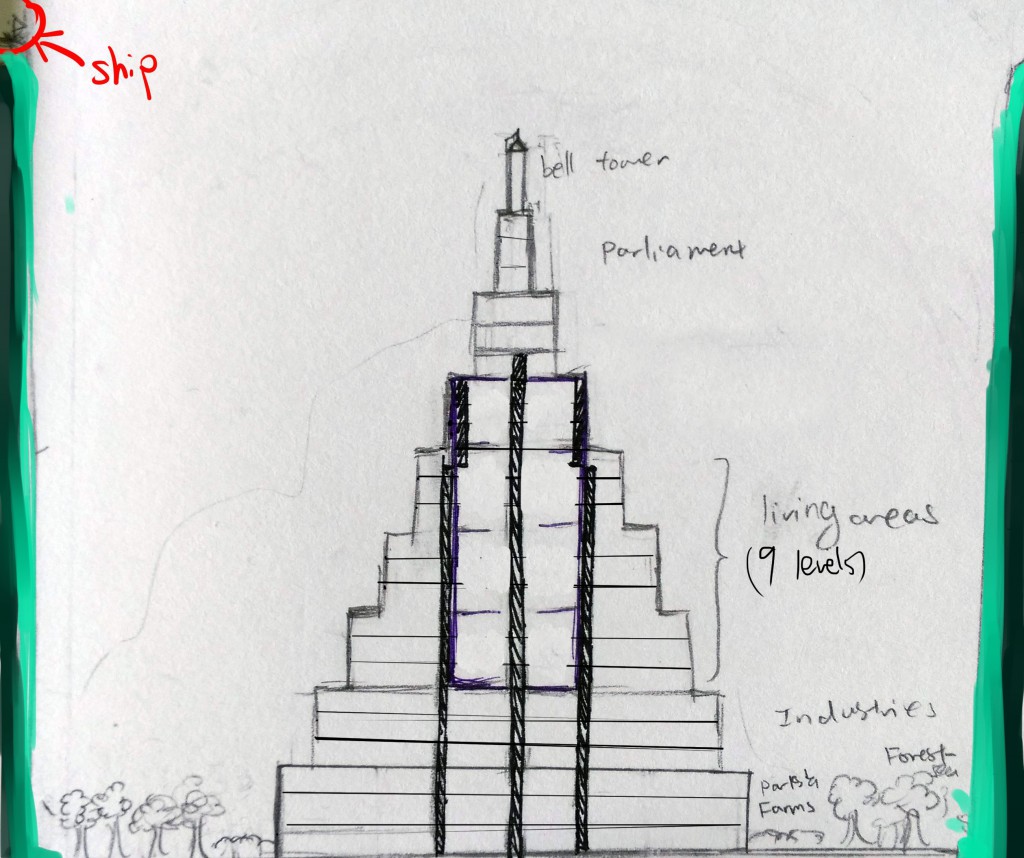 Aside from that, trams and carts are also used, acting much like buses that goes wrap around the entire citadel like structure.

*Energy source: nope, Vo’a does not have any kind of magical stones that could generate power. Well, the solidified gathering of a Giowel’s essence could act as a power source, but usually such gathering of essence could only be separated from them in death. Giowels could, however, provide energy for any form of transport, while taking turns to rest and recover.