In this post, I’m going to focus on the different texture and mark making I achieved with acrylic paint and Chinese ink.

As this is my first time trying linocut, I wanted to play with all the different textures that linocut could possibly offer me. The first thing that I did was to carve the linocut. As it was my first time, there is a lot of uneven thickness of the lines.

While I like the varying width of lines that the print produces, I face two issues that I didn’t like the linocut print.

Firstly, the printed image lines are too clean. This gave it a very mechanical look as if it was mass produced. I feel that emotions are raw and fluid, which cannot be produced through a linocut print.

Secondly, I don’t like how the linocut is too pre-planned. everything on the linocut print can be planed, corrected. There is no room for mistakes. I feel that the print than becomes artificial.

I also used the lino cut pad to create textures, by imprinting objects and drawing on the paper.

In the first two prints, I added too much ink to the pad hence it turned out too dark, with little contrast between the impression and the background. In these two artworks, I used a combination of a tree branch (the thicker and hazier lines) and my fingernails ( the thinner and more consistent lines)  to create the impressions.

So in the following prints, I used lesser ink, which gave me better results. in all three, I used both the blunt end and the sharp edge of the carving knife for the impressions. While I like the control this technique gives me over my work, similarly, I feel that the lines are too clean and artificial to express the fluidity and the complexity of the emotions.

Chinese ink is more fluid as compared to both the printing ink and acrylic paint. This allows for more fluidity and a greater variance of texture.

The first technique I wanted to try was dripping, wet on wet and dry on wet.  For dripping, I elevated my paper on a book stand before applying the ink at the top allowing it to flow down. To make the work more interesting, I added dry brush strokes over the drips.

For the wet on wet technique, I added water to a specific spot on the paper before adding ink directly applying the ink to the paper, allowing the ink to diffuse out. Similarly, I added dry brush strokes over to create a more interesting look. In addition, I also tried adding white ink over to create layering and depth.However, I didn’t like the shininess of the dried white ink. (and also because it was too expensive and precious) 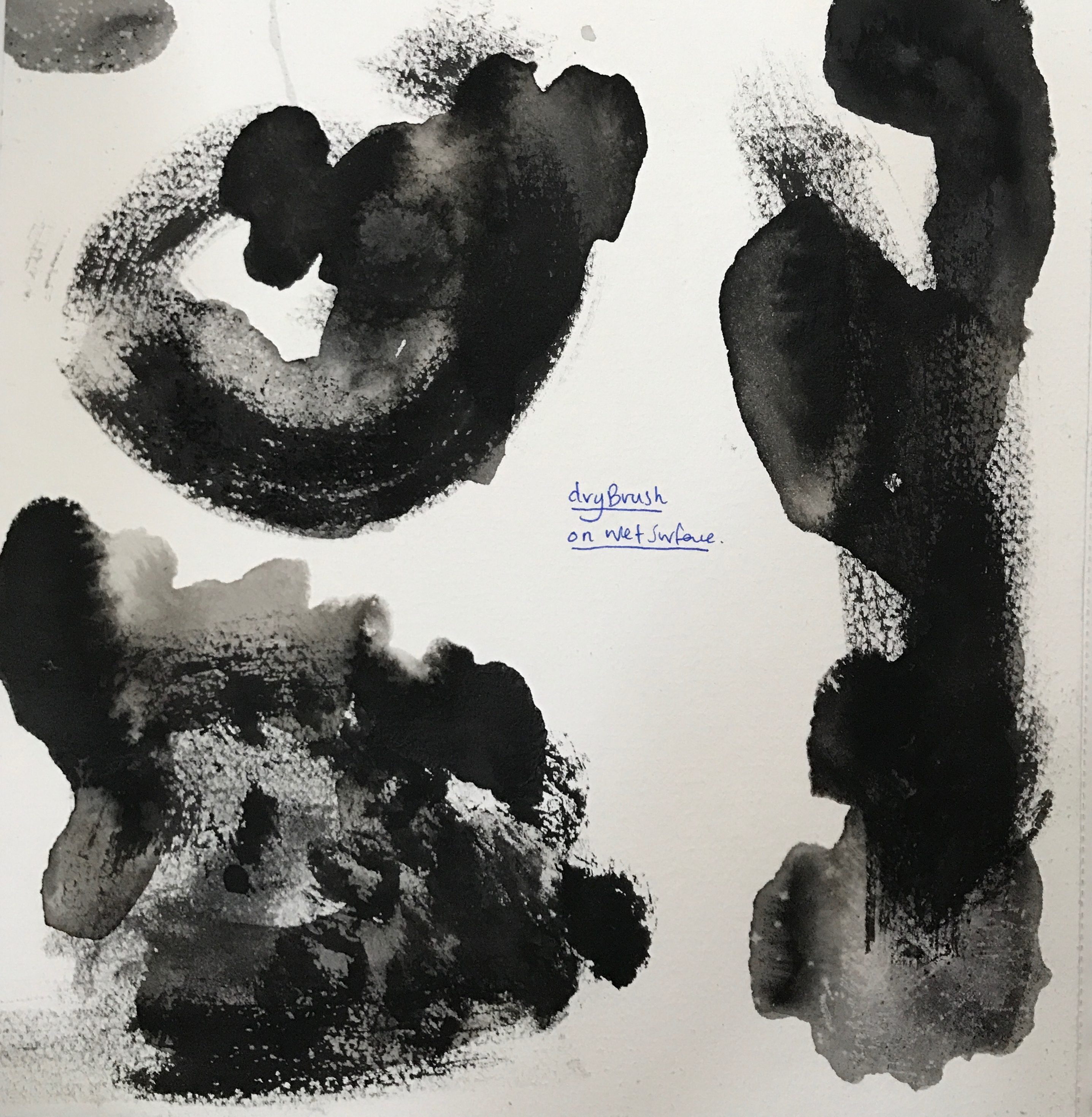 The second technique I wanted to experiment with is salting. I added a copious amount of water to the paper before adding the ink. Afterwards, I added salt to the ink and left it overnight. The salt would absorb the water present in the ink and leave behind a crystallization effect. 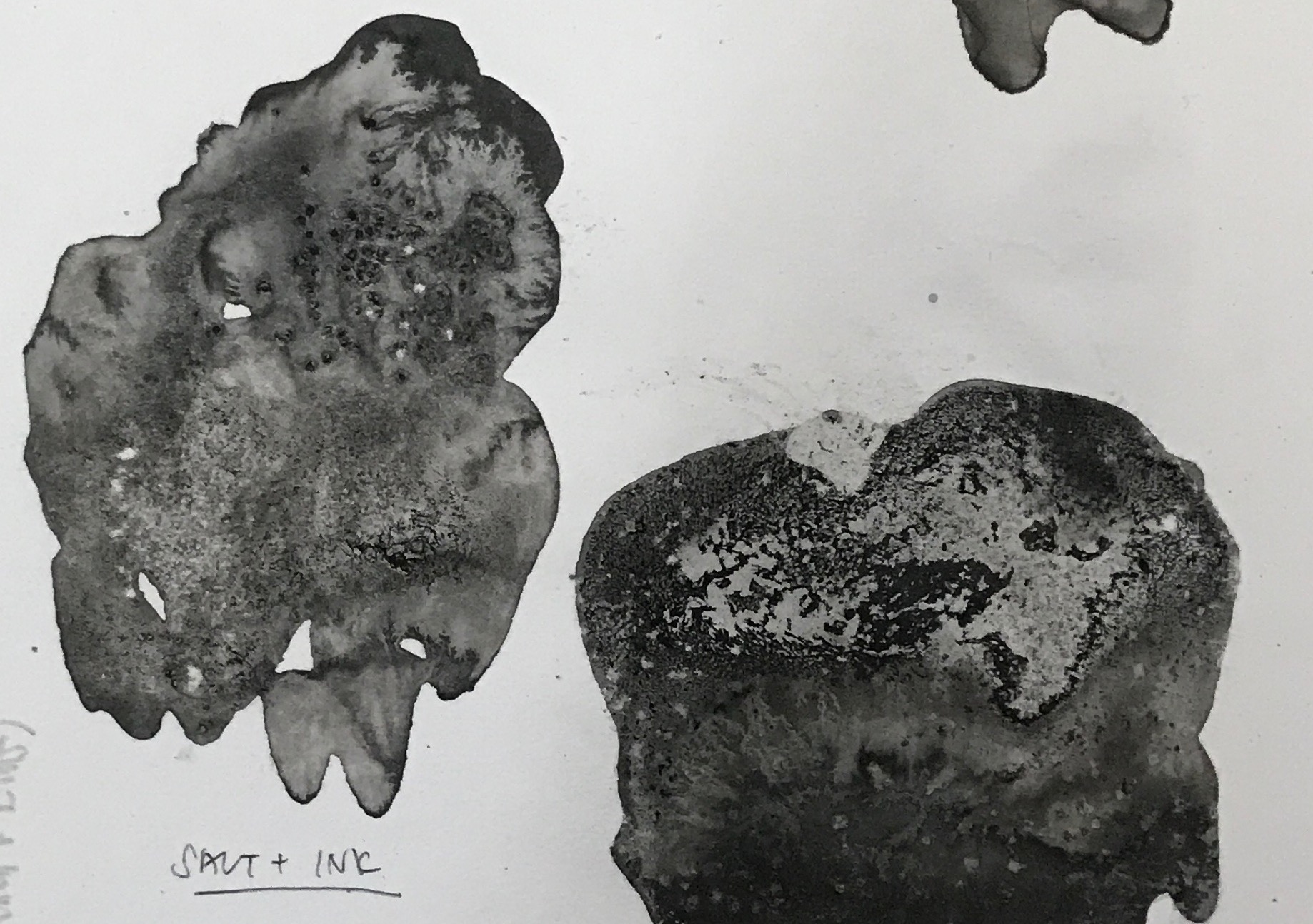 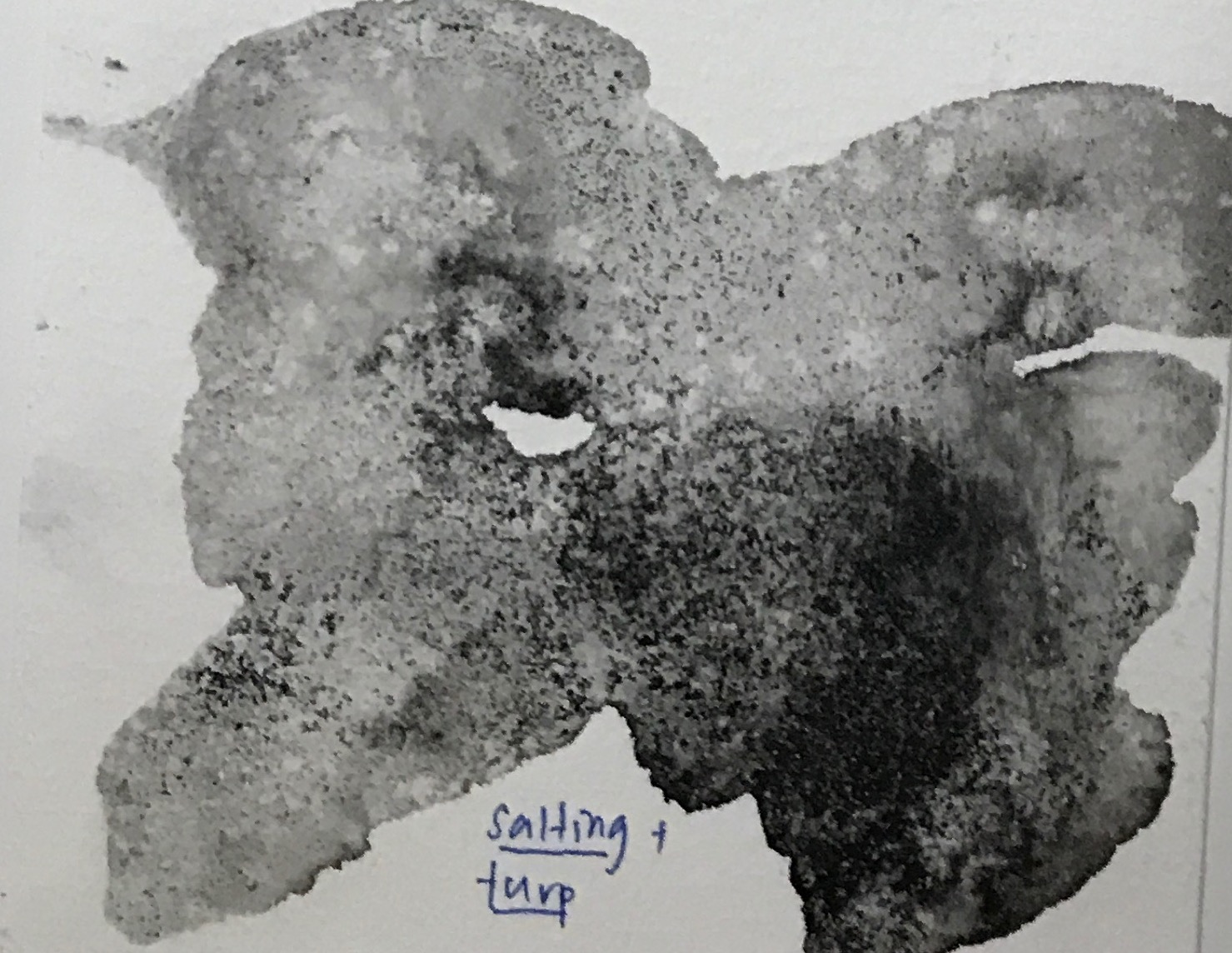 I really like the effects of this technique and would be definitely trying it out on a larger scale the next time.

The third technique that I will be experimenting with is bubbling.  For this, I added soap, water, and ink to a bowl. Using a straw, I blew into the bowl to create bubbles, before pressing my paper on top of the bubbles. 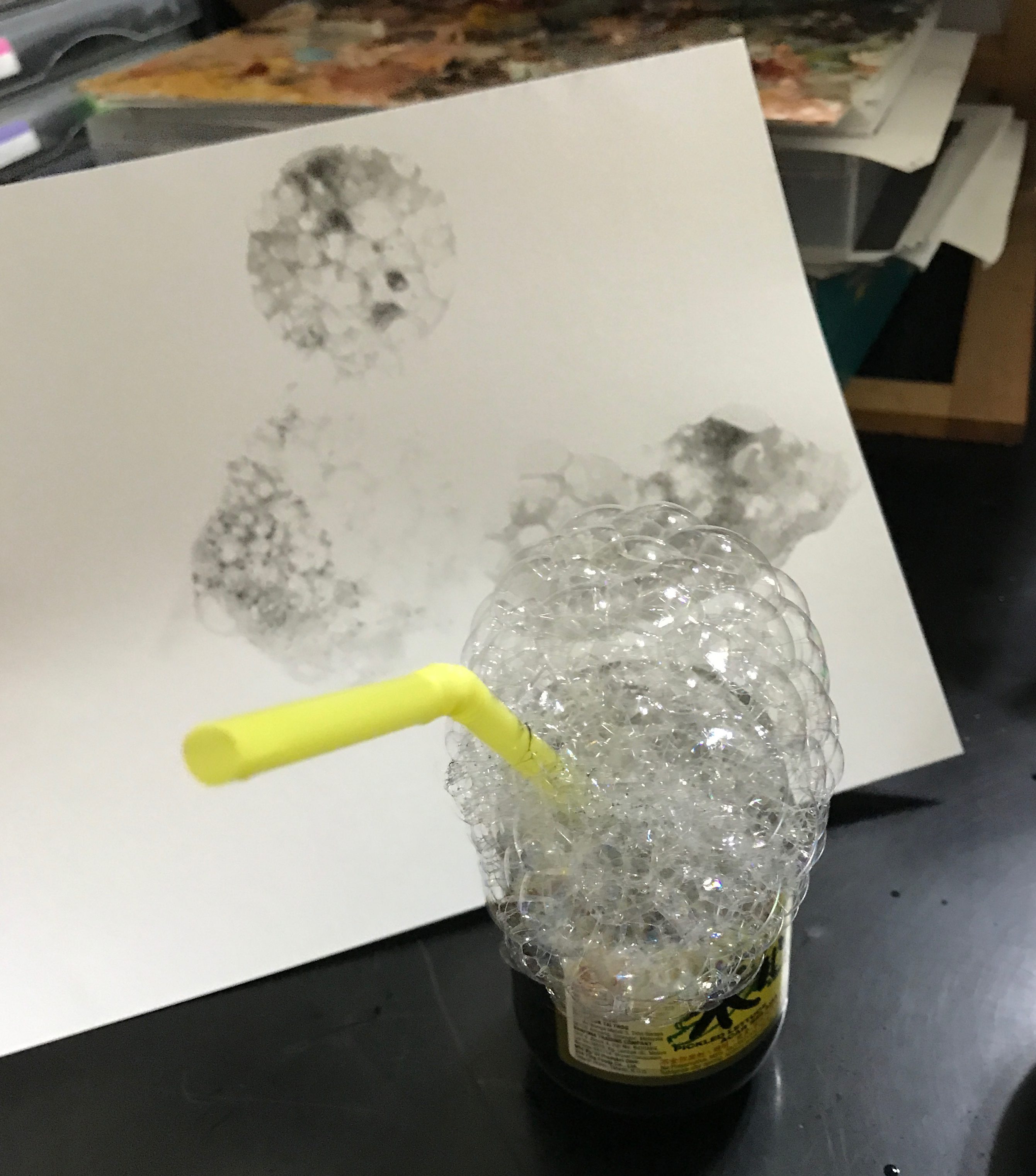 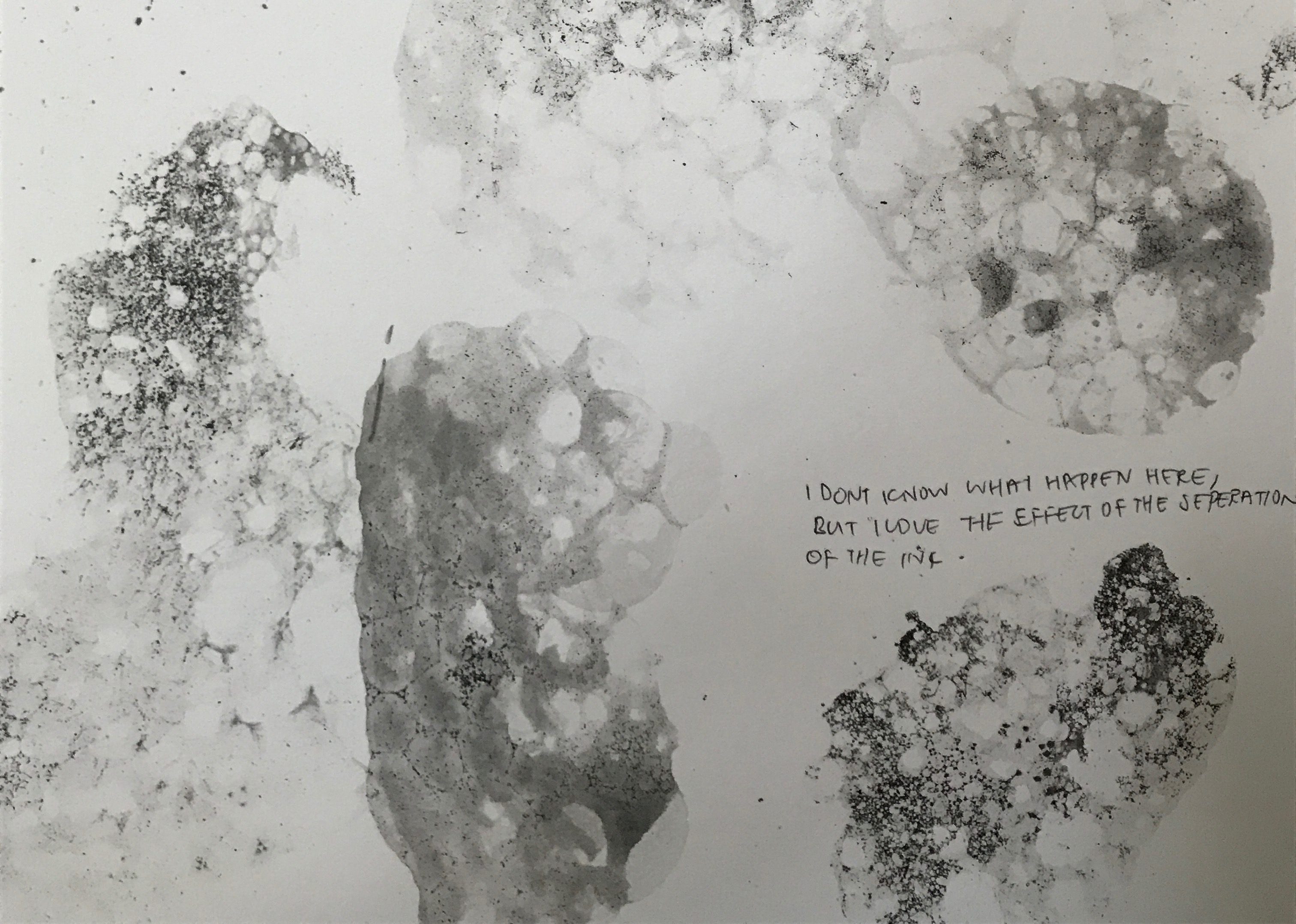 A variation I did to this technique was instead of blowing into the bowl I blew onto the paper directly, this created a bubble like impression on the paper. 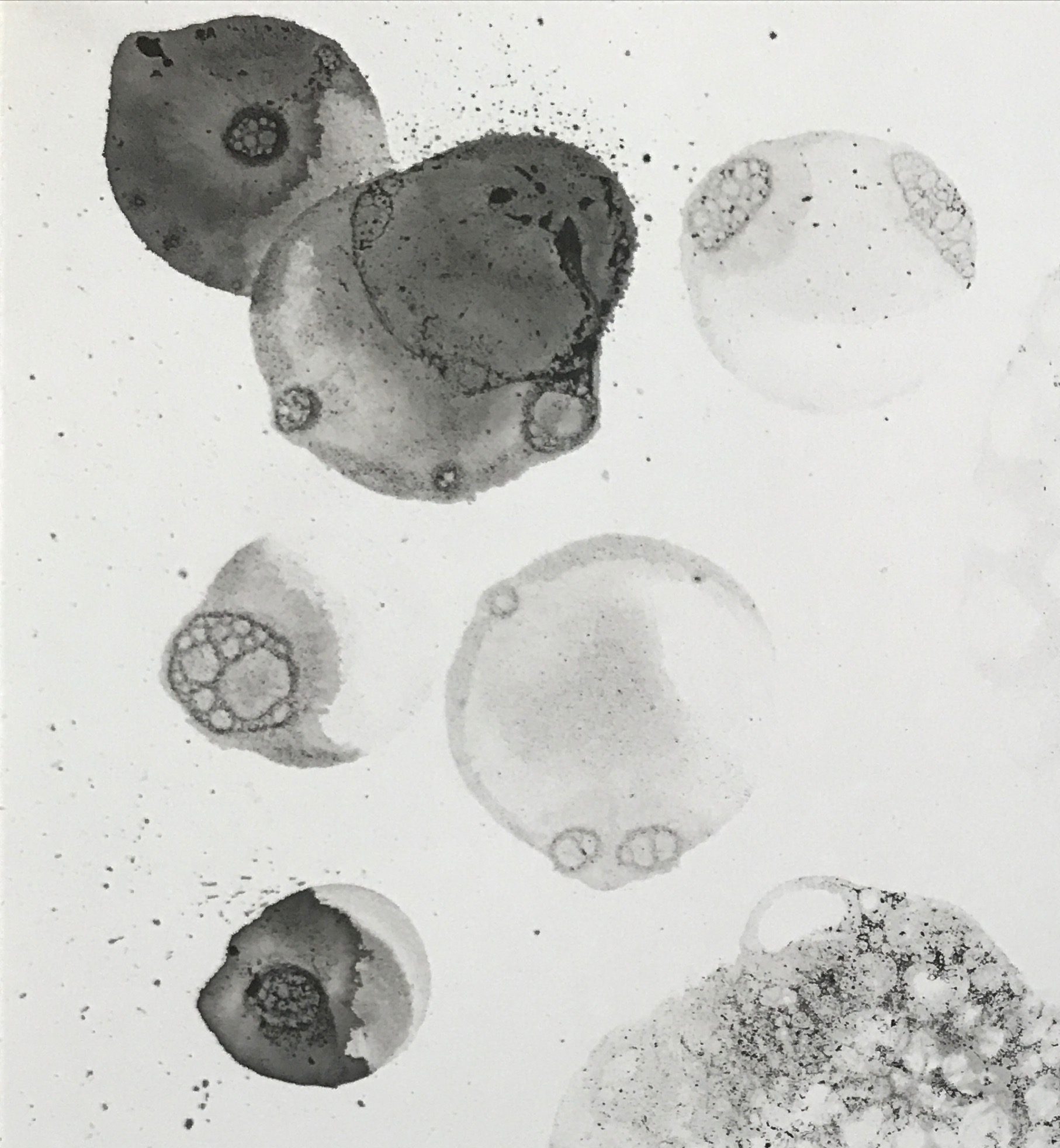 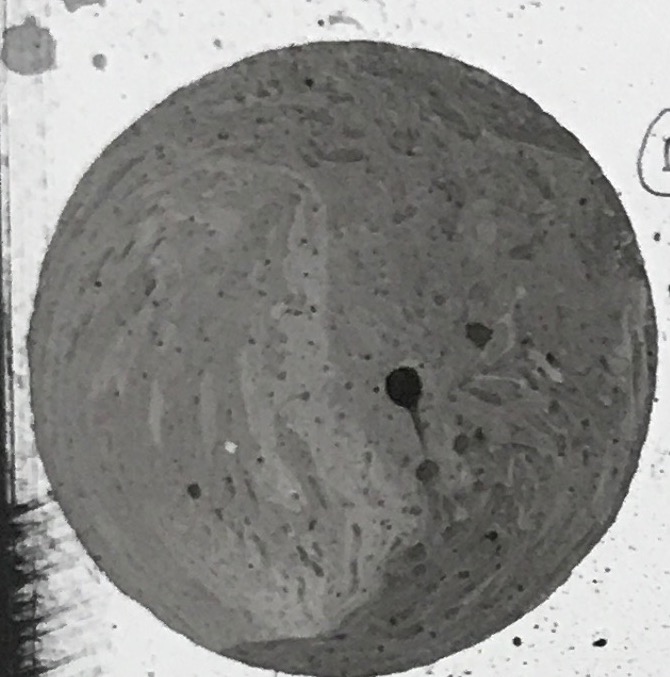 The fourth technique that I experimented with was a happy mistake. wanted to wash away a mistake I made by placing the paper under a running tap. This created a beauty effect as the ink captures the movement of the running water. This results in a very zen effect.

Unlike Chinese ink, acrylic paint is stiffer and is better able to hold its shape after it dries. However, after drying it has a shiny and plastic finish which I don’t like. This can be demonstrated through the technique of spattering paint onto the paper.

as seen in the first 2 done by acrylic paint, the spatters do not spread on the paper and retain its shape. This allows for more movement and energy to be seen from the paint.

The second technique that I experimented with is creating texture with the palette knife. The paint dried up forming reliefs, giving the marks an extra dimension and layer. I tried both dabbing and scraping. 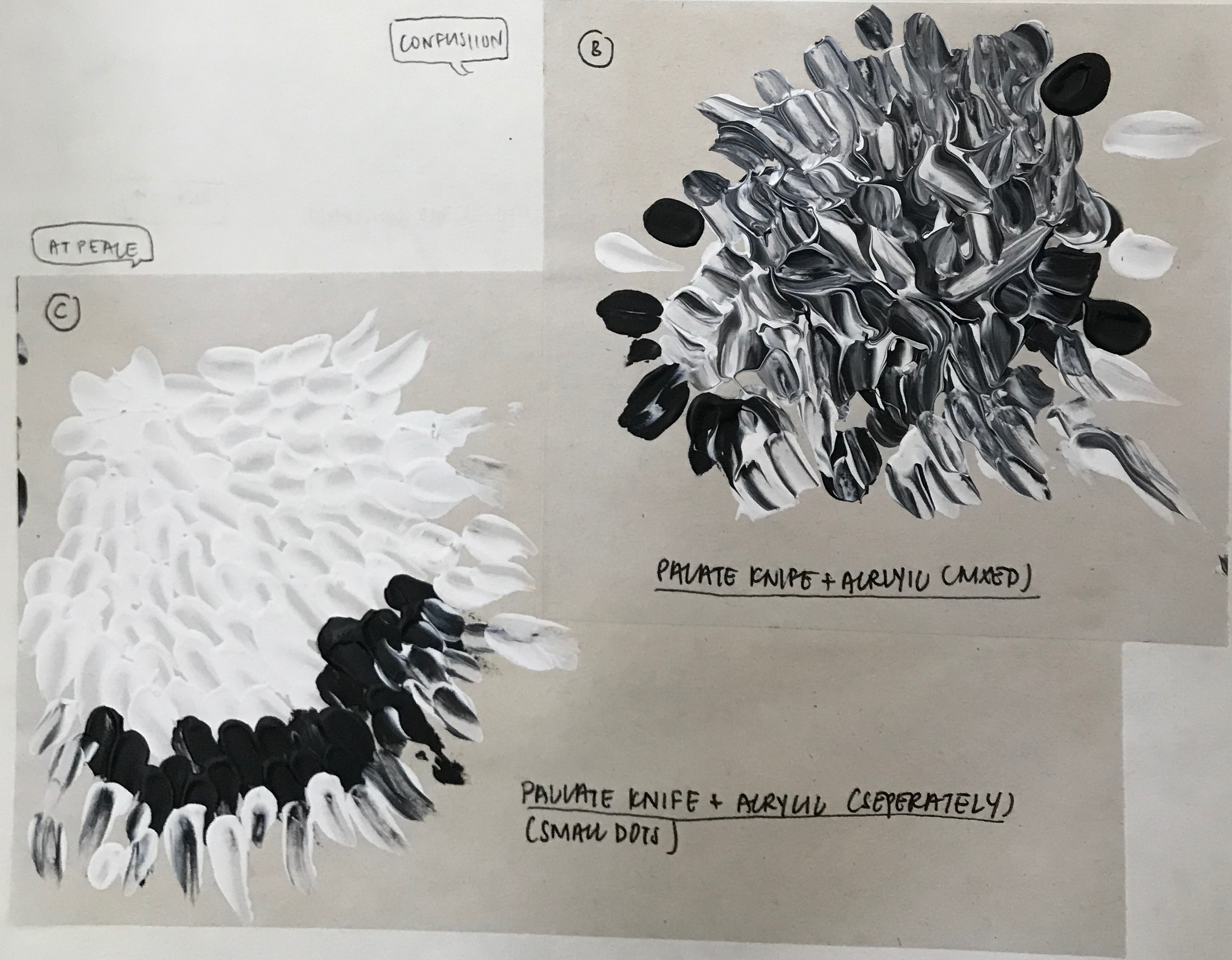 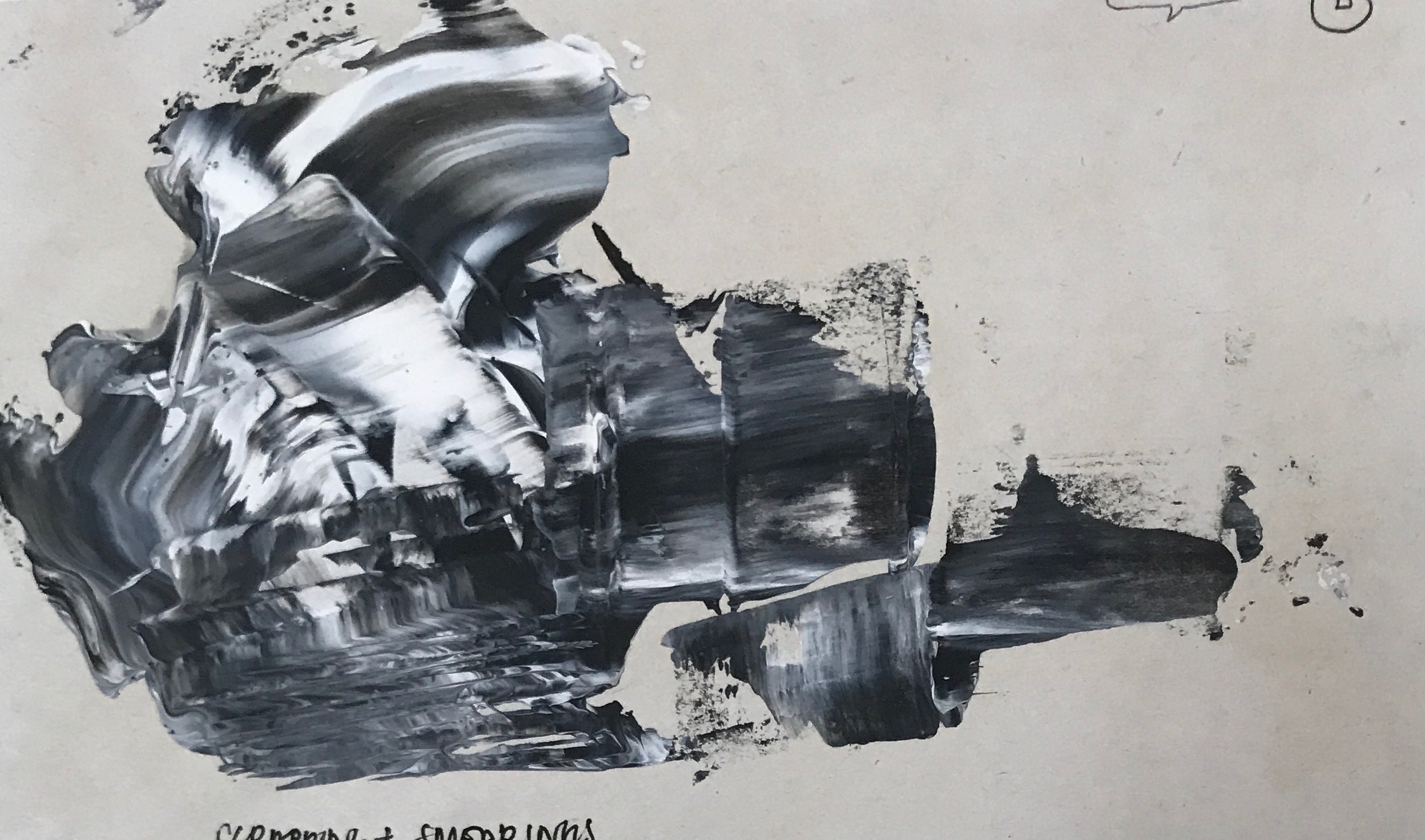 I like how the texture of the paint is able to add another dimension to the flat marks. I also love how that by alternating the angle and the stress applied on the palette knife, gave me different textures and marks.

The third technique that I experimented with was dabbing balls made up of tissue paper, newspaper, clingwrap, and aluminum. 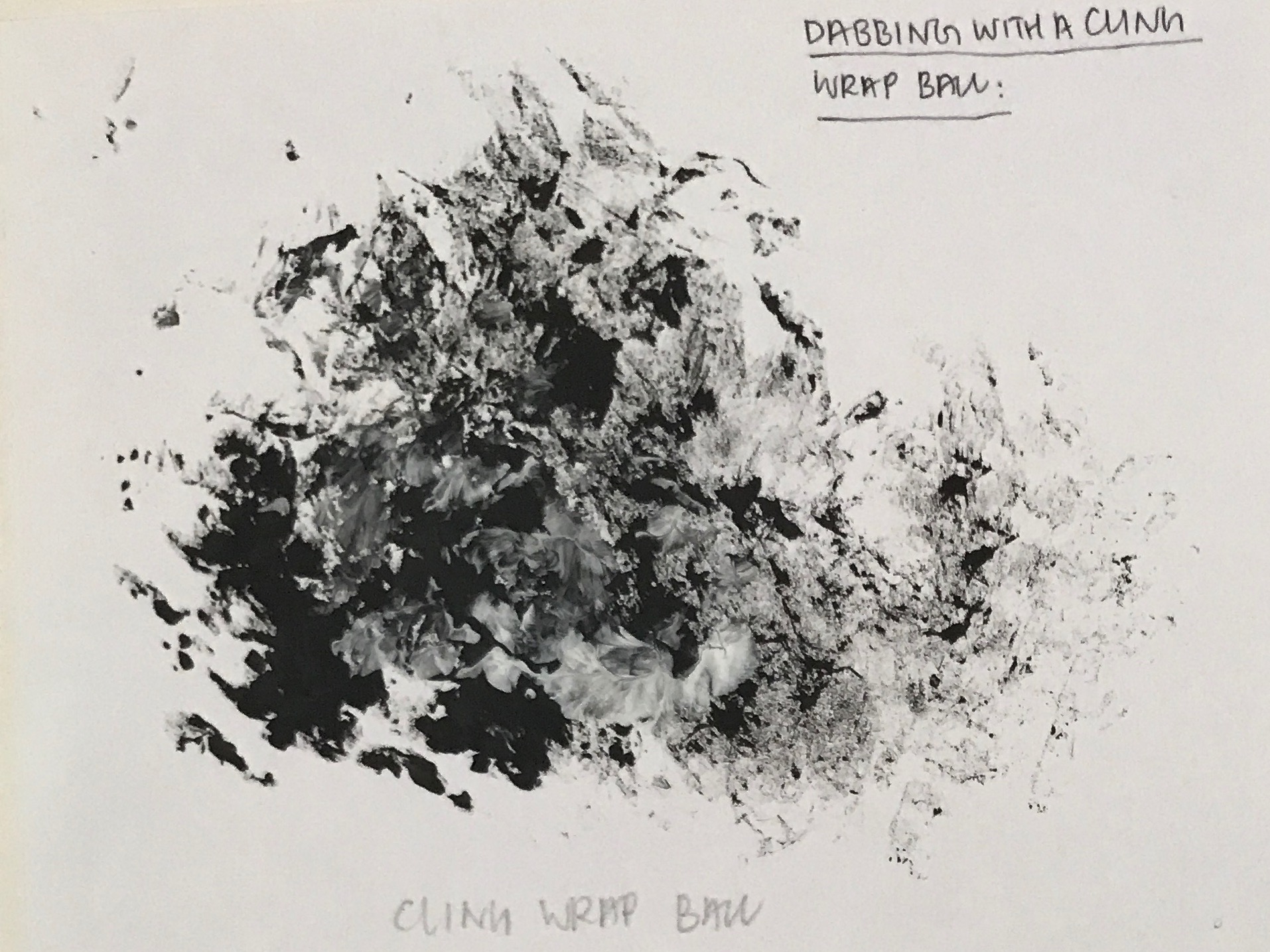 Of all the aluminum and the cling wrap gave the most textured effect while the tissue paper has the softest edge and the most blending. I really like the texture that the aluminum and clingwrap offered, and would definitely be trying this out on a greater scale.

The fourth technique that I experimented with was piping. I placed a mixture of white and black acrylic paint into a plastic bag and snip the end of before piping it onto the paper, like how you would with cake frosting. The acrylic is less dense as compared to oil paint, hence the paint droop downwards as it driers, making it flatter than I hope it would be. 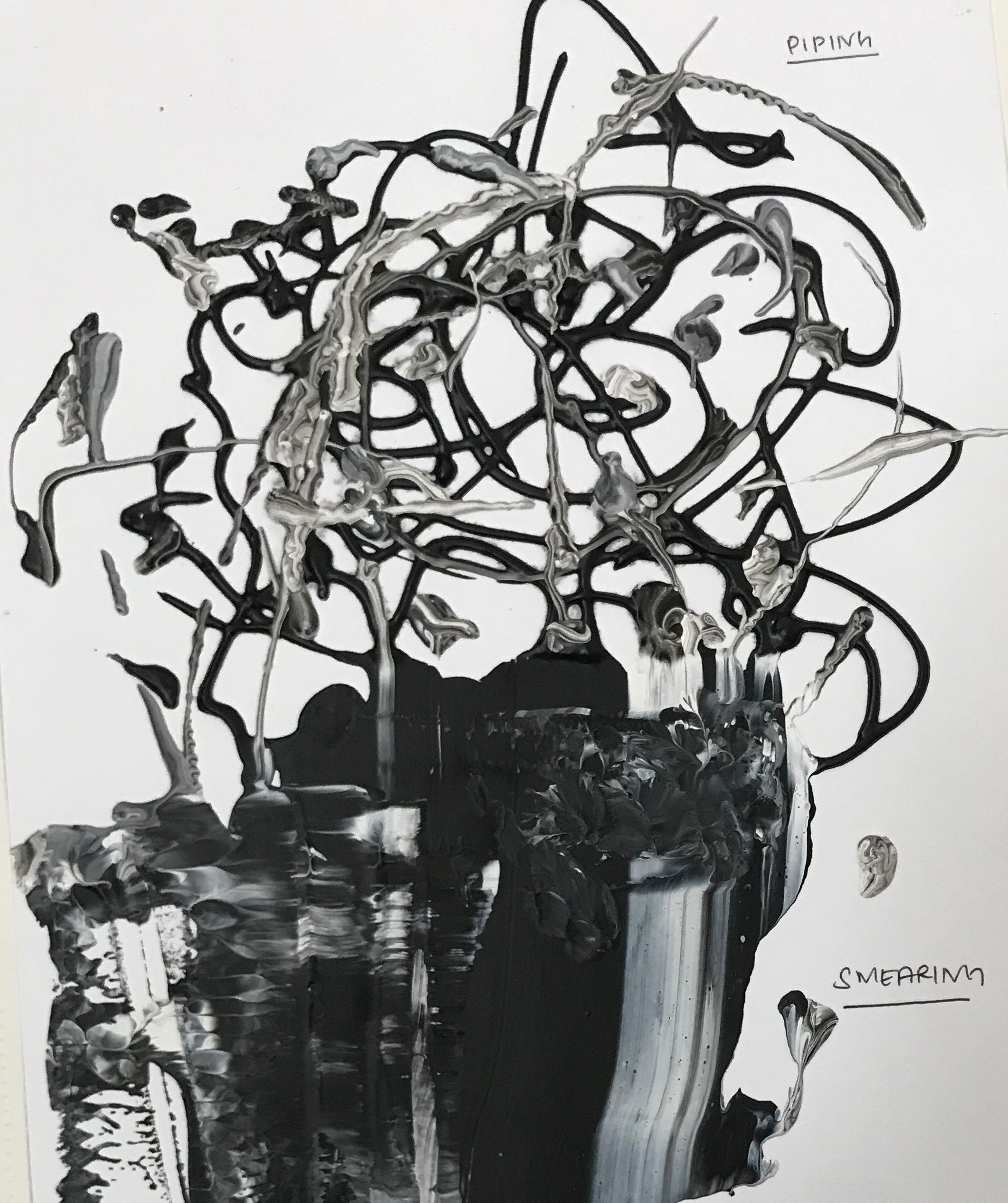 The fifth technique that I tried was the decalcomania. I applied both black and white paint onto a paper and folded it into half allowing the paint to mix. it resulted in a beautifully symmetrical artwork.

The last one that I did was a total happy mistake. I had a lot of ink and acrylic paint remaining. So I mixed the white acrylic with water and the black acrylic with ink so as to make it more fluid, before pouring both paints at the same time from a height. I think that the ink and the acrylic didn’t mix well, resulting in the fragmenting of the ink particles, which I love.

EXPERIMENTING WITH MOTIF SHAPES AND ILLUSTRATIONS

I wanted to explore the use of motif to suggest emotions and textures.

The first three motifs that I created, were too rigid, for my liking. I prefer the fourth and the fifth one better as it is more unique and fluid. While I don’t like how uniform and clean this looks, by combining multiple motifs together can create an interesting and complex composition.