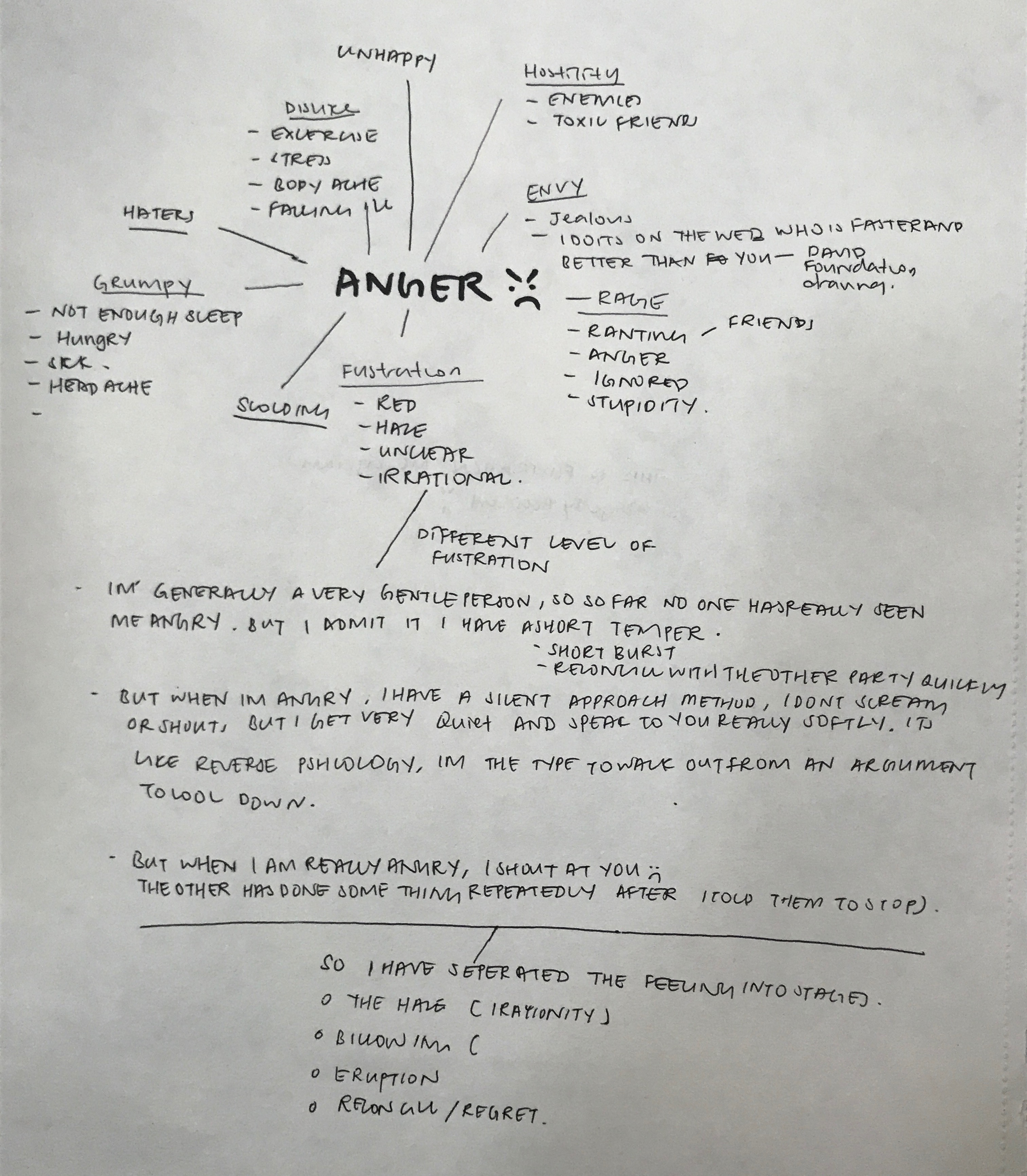 For me, I have a short temper and I lose my temper easily. But I have two different intensity of anger. I often choose to approach the situation calmly, using logic and reasoning. Often I would walk out of arguments if it gets too heated. I would speak to the other softly laying facts and the truth. However, when someone repeatedly does something after I told them to stop, I would become a volcano. I lose my rationality and shout at the person. As if there is a haze, blocking out my sensible thinking. for the emotion of frustration, I will be focusing on the different stages and intense anger. 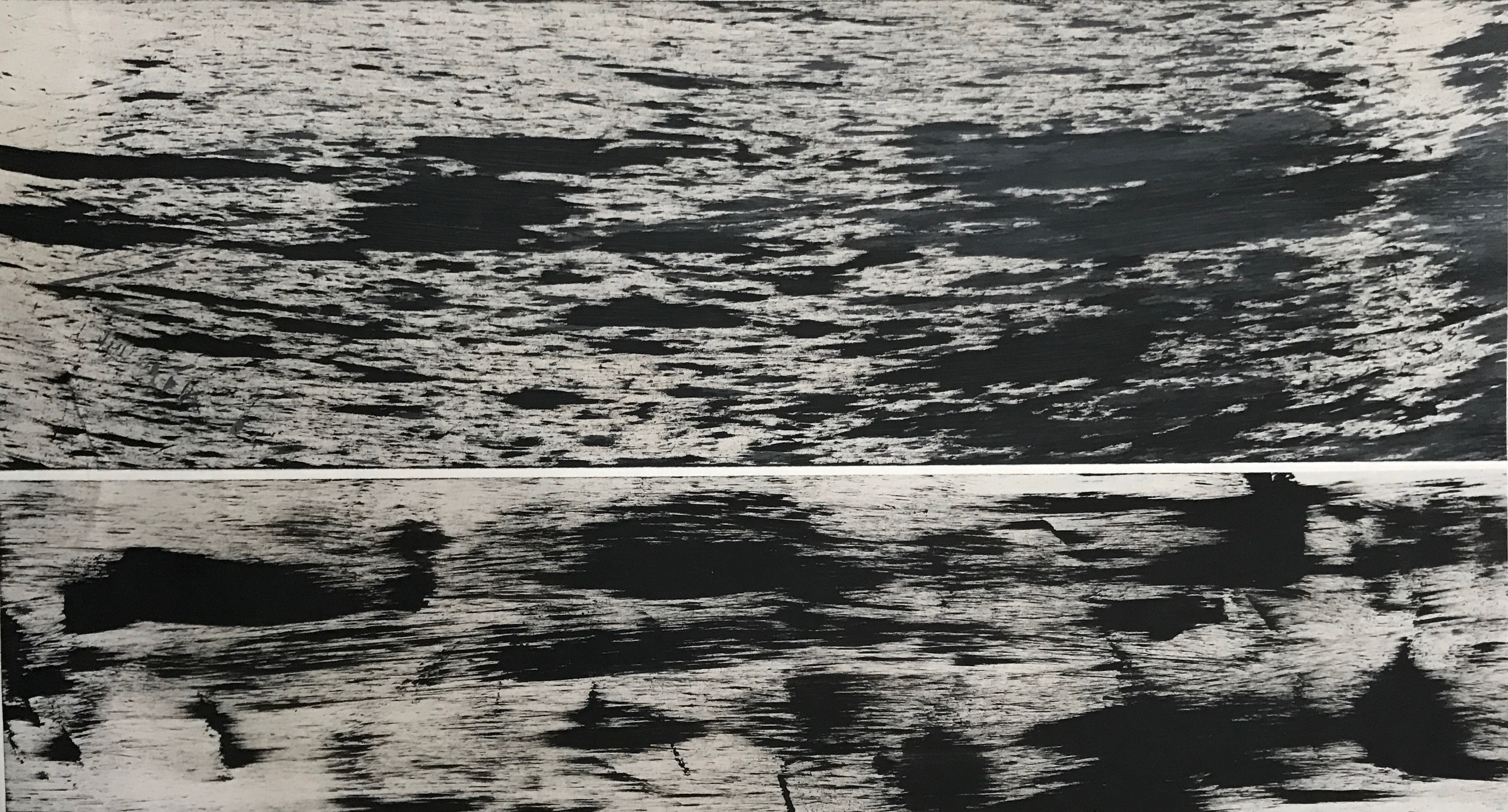 The first piece I tried to capture the essence of frustration. I blasted heavy rock metal music through my headphones and channeled all my anger onto the paper. I achieved this by rolling a sponge with acrylic paint over strips of paper. 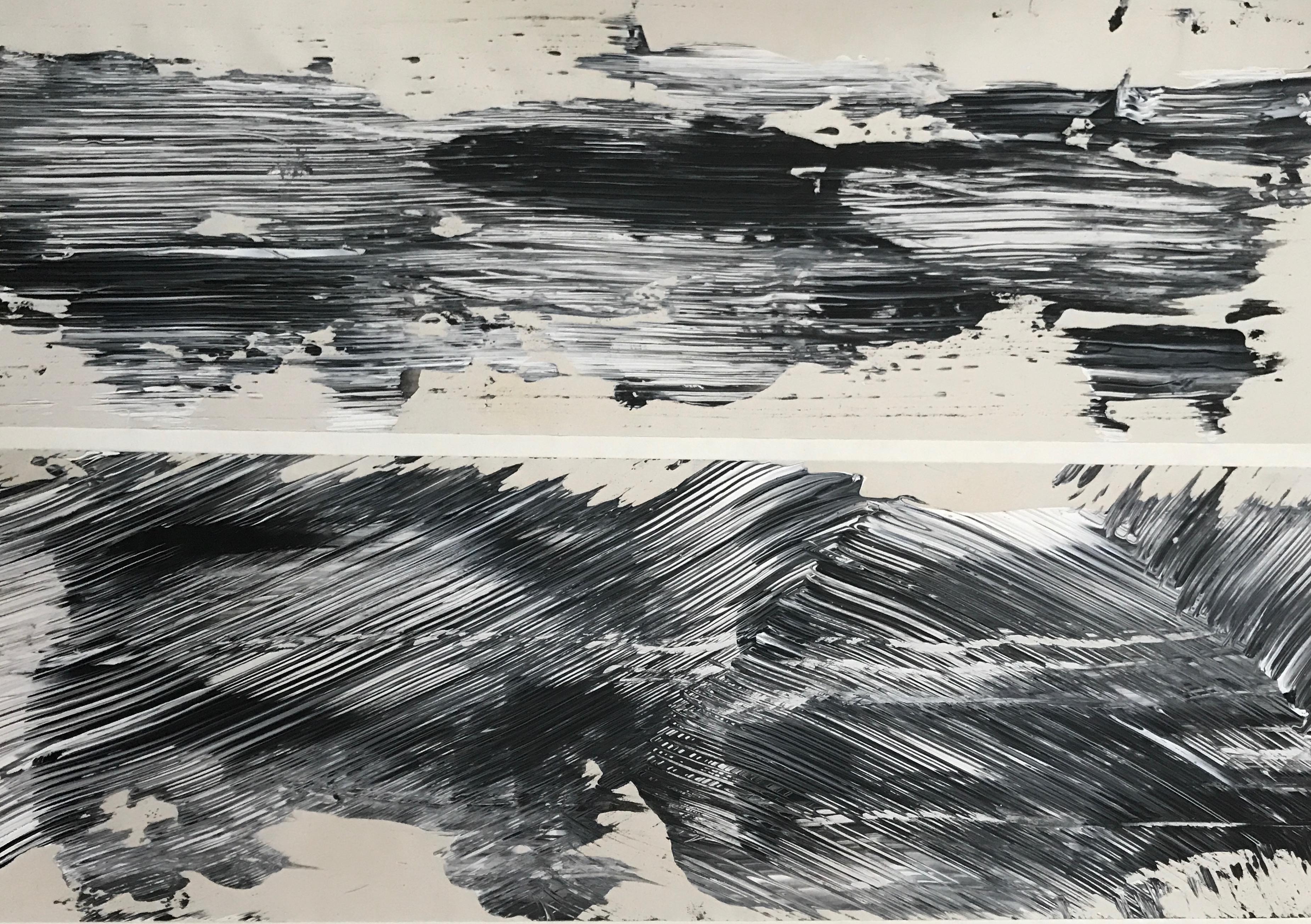 The second piece is a different rendition aiming to capture the essence of anger too. but this time I applied blobs of acrylic paint to the paper before spreading them out with a broom. I really like the texture captured and created by the broom.

While I feel that these captured the essence of anger very well, this approach is very simplistic and common. 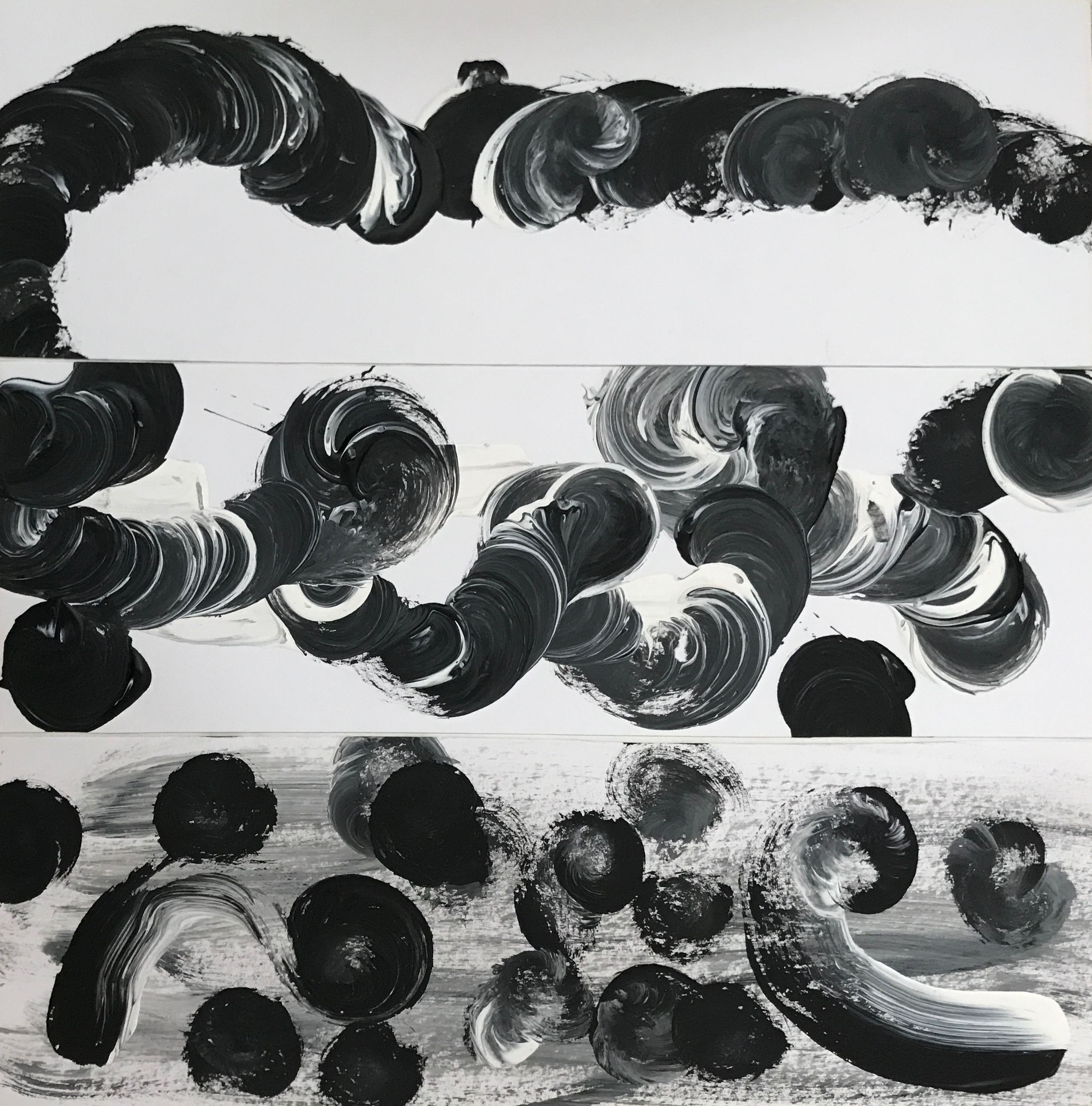 In the third piece, I explored with the billowing of my emotions before it becomes a full-blown shouting match. For this, I dipped half of my brush into black acrylic paint and the other half into the white acrylic paint. then I painted circular motif on the papers. During this in-between state, I often have an inner turmoil with myself, fighting the urge to scream at the other party. the sweeping strokes are inspired by a tornado, where the emotions are building and is becoming increasingly destructive. 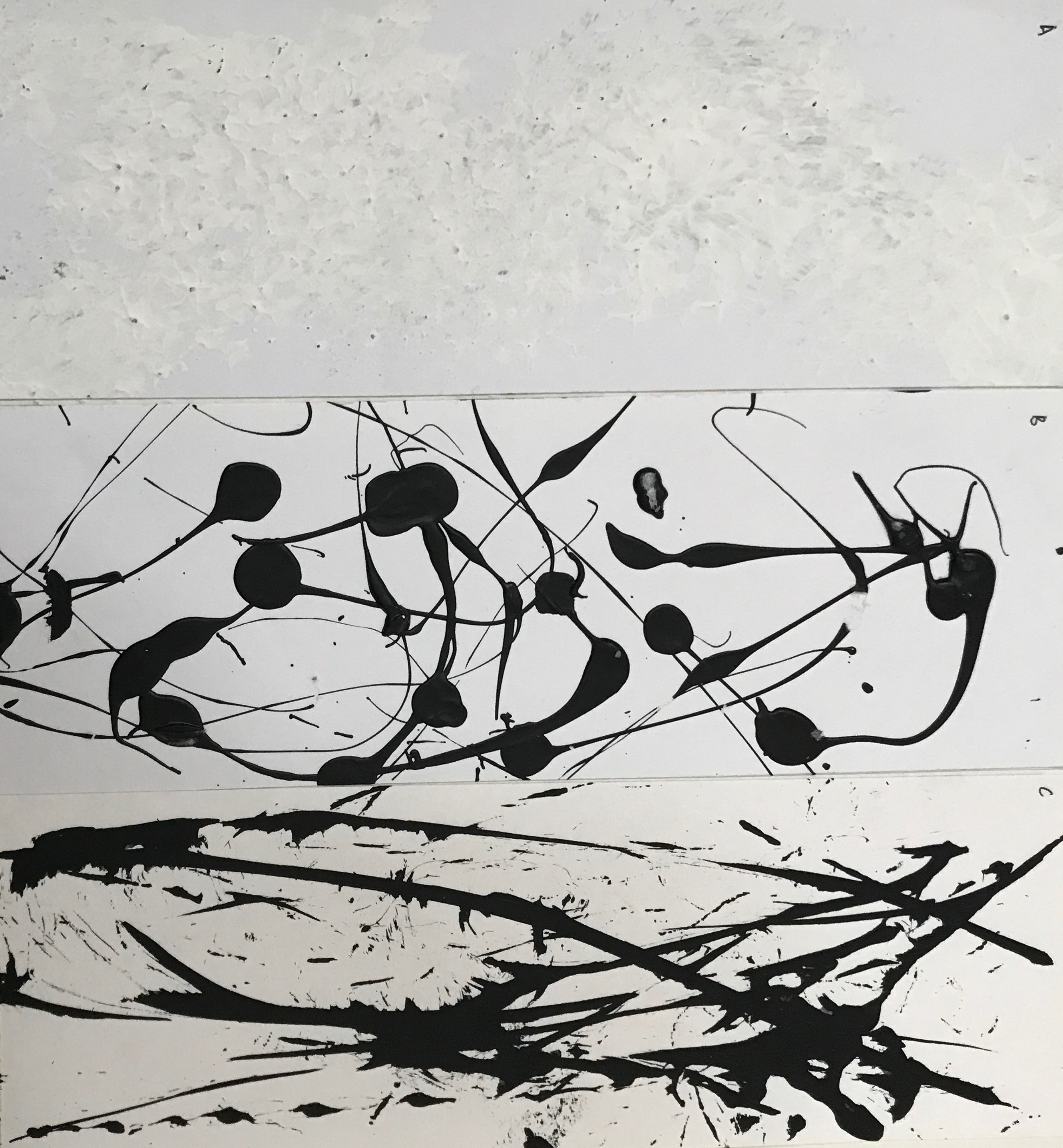 Lastly, I tried to express the destructive and explosive part of my anger. in the first strip, I wanted to focus on the texture of the paint. The rough finish of the paint makes it look very rough and poses a form o raw energy. In the second piece, I tried to express the feeling of anger bursting out from under my skin. For this, I  splattered acrylic paint from a height using a paintbrush. for the last one, I wanted to focus on the destructive and explosive aspect of my anger. I dipped a string attached to a needle into Chinese ink, before dragging them across the paper. This gave it a raw finish which goes well with anger. However, these expressions are too common and I need to give the emotion more layers for it to be uniquely mine. In addition, I should have splattered the paint from a greater height with more strength as currently, the splatters look very energetic. I would be improving on this by adding a dry brush stroke as a base, before splattering the white paint on the top. 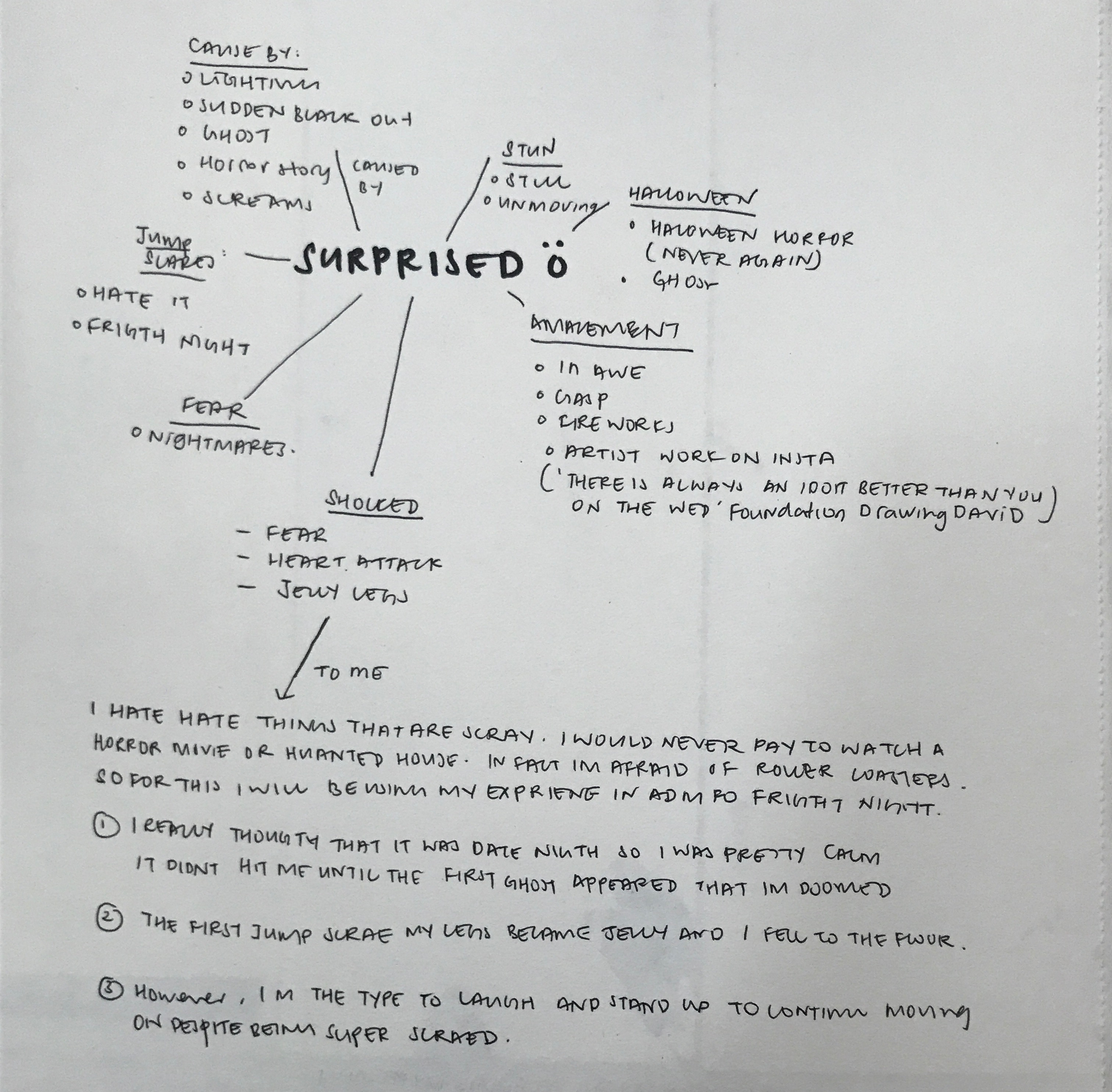 For me, I’m super easily scared. I would not pay to be scared or be paid to be scared. During fright night in ADMFO, I originally had no idea that it was fright night until I saw the ghost. At the beginning, I was very calm and repeated to myself in my head that there are no such things as ghosts. However, when the first jump scare appeared, I was so shocked that my legs turned to jelly and I fell. However, I just brushed it off laughing while I stood up again, to continue on the whole journey, despite being super scared. I will be basing the emotion of surprise of my experience in fright night. 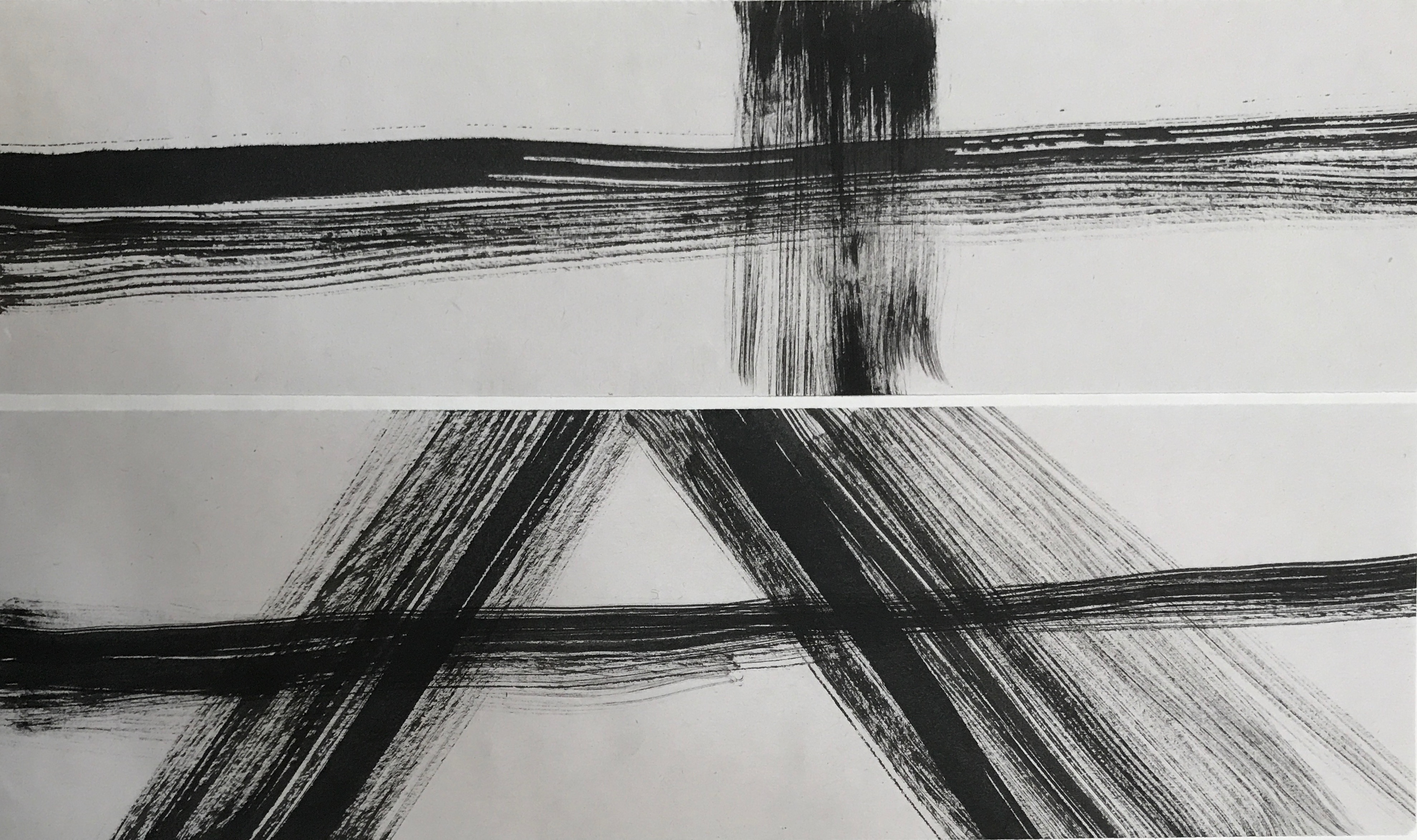 For the first piece, instead of focusing on my experience in fright night, I wanted to try to suggest surprise through the creation of an anomaly in my work. In both pieces, there is a harsh contrast between the lines, horizontal versus vertical, diagonal versus horizontal. I feel like this is a very superficial way of expressing the emotion of shock hence I decided to scrape it. 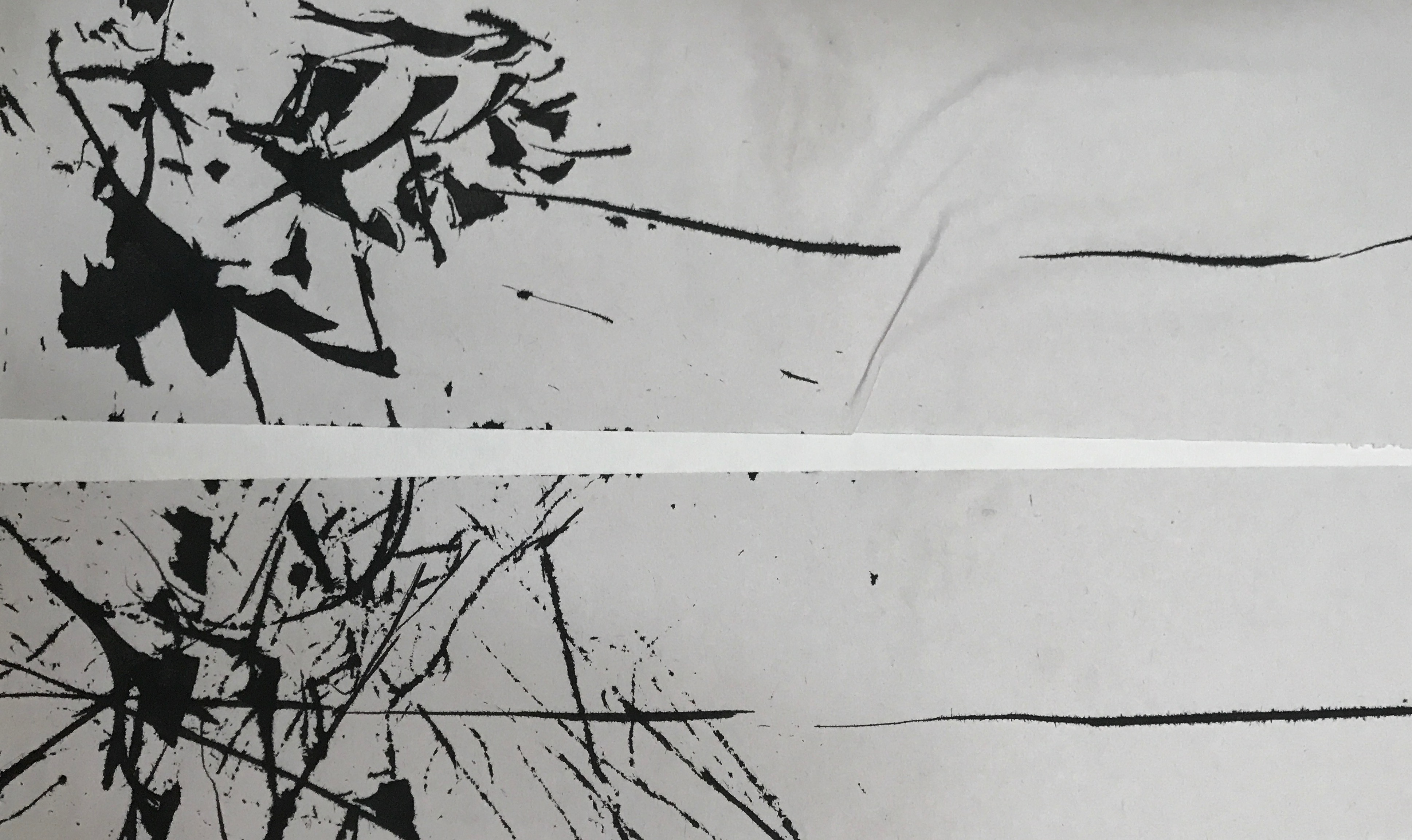 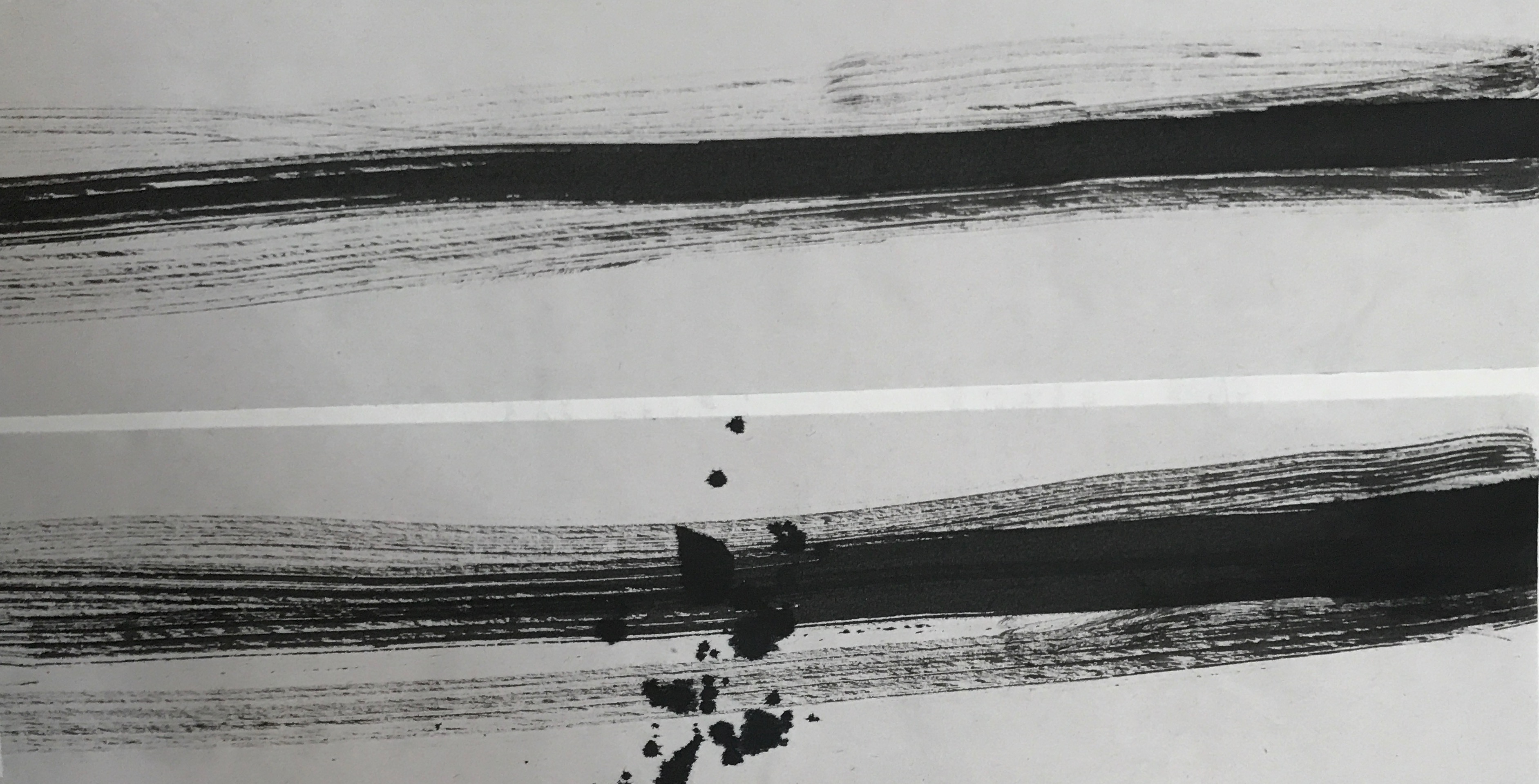 For the next series of work, I was inspired by a heart monitor measuring my heartbeat during a jump scare in ADMFO. First, I would be calm as I don’t know what is happening. This is represented by the flat lines on the left after the jumpscare happens and my heart beats super fast causing a sudden rise in my heartbeat. This results in the fraying of my emotional state as shown by the diagonal lines in the first and the splatter in the second. The first piece is done by dipping thread into the ink and bringing it around the paper. the seconf=d one is done with a dry brush dipped into acrylic paint. Among the two, I prefer the second one. The second one has a frayed line that continues on to the end of the paper. I like this connotes the fact that even though I try to act fine and brush the fact that I got scared, my mentality is still frayed and I’m super scared on the inside. 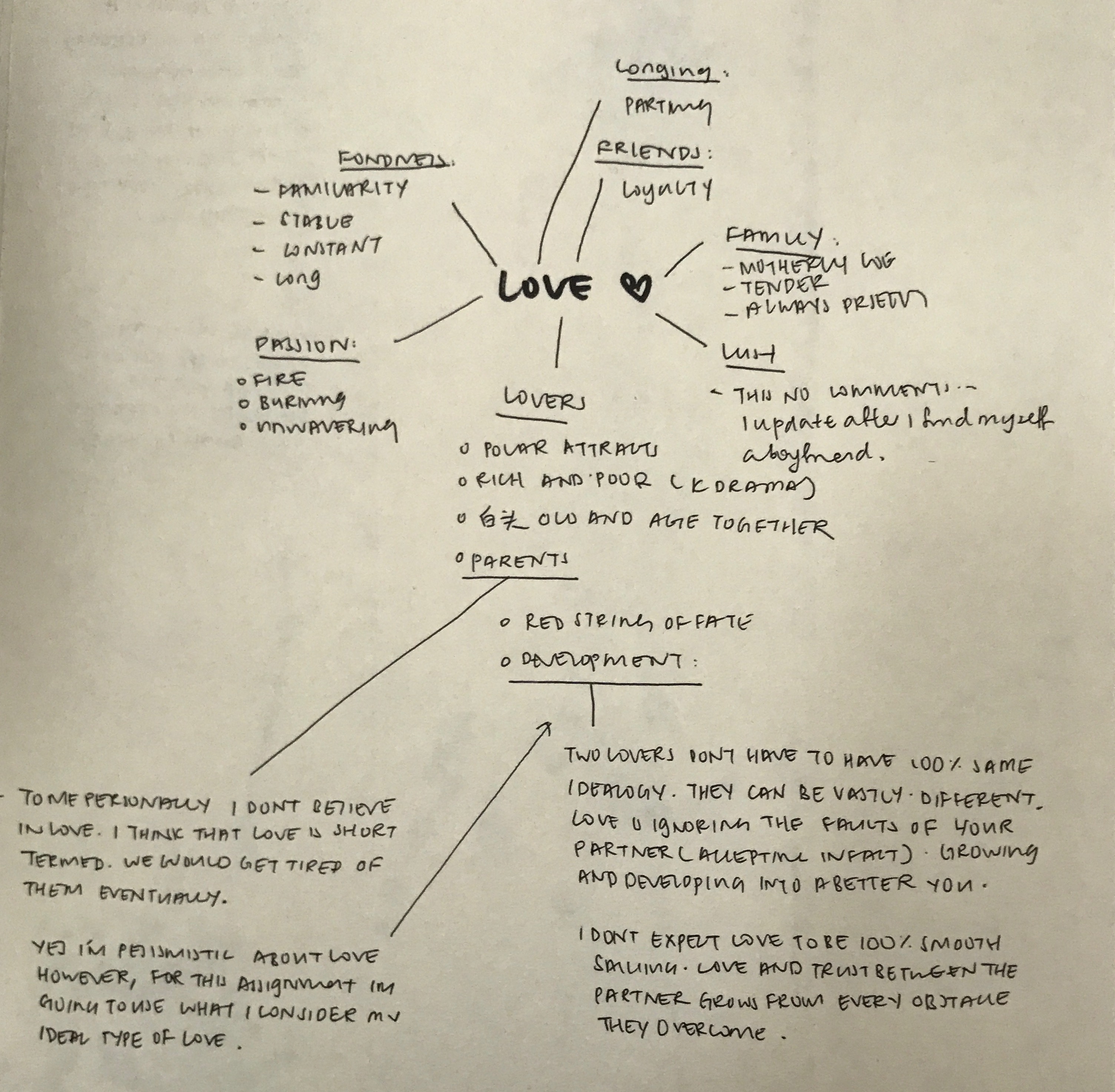 For me, I don’t believe in love and neither have I experienced a romantic relationship. so I’m going to base love of my idealistic and perfect ideology. To me, two halves do not make a perfect circle. I view love as a way of development and growth. It’s about the merger of two vastly different people, coming to terms and accepting each other’s differences and weakness.

For this piece, I was inspired by the Chinese legend, the red string of fate: two lovers will be bounded by a red string tied onto the pinky. I tried drawing the idea of having your pinky bounded by doing blind counter drawing for both my left hand and my right hand. However, the end result did not turn out great as it is hard to distinguish what I drew much less tell the emotions. 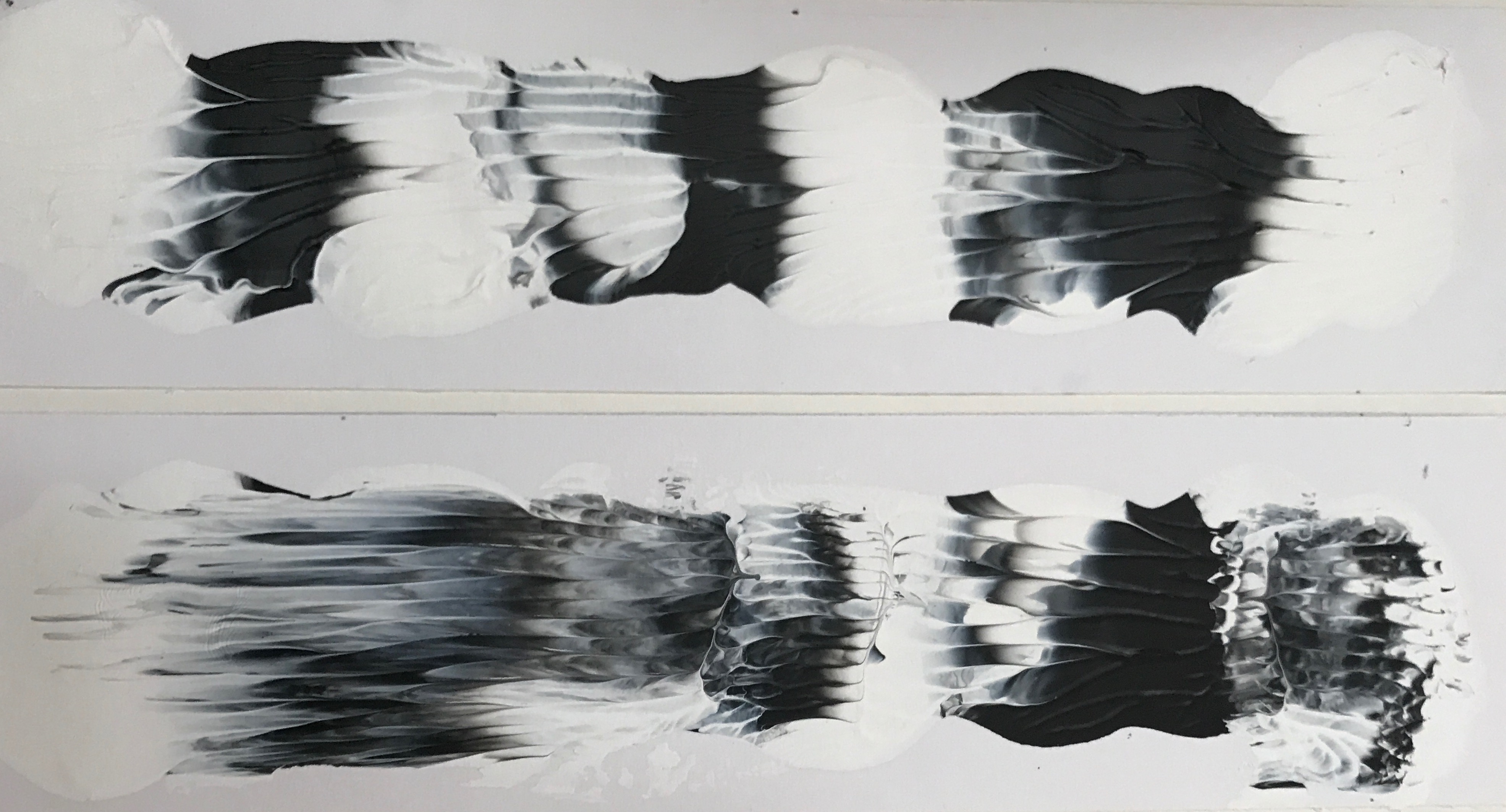 For the last piece, I wanted to show the merger of two to become a better version of yourself. I used the technique of decalcomania for this piece. I place blobs of paint onto the paper before sandwiching them, allowing the paint to blend and mix with each other. The white and the black paint represents two people that are starkly different and opposite of each other. The gray shows their development and acceptance of each other. I like this result a lot as it shows the gentleness of the relationship through the soft blending of colours and the turmoil of the relationship through the jagged areas. I will most definitely be exploring this technique on a larger scale for my final.