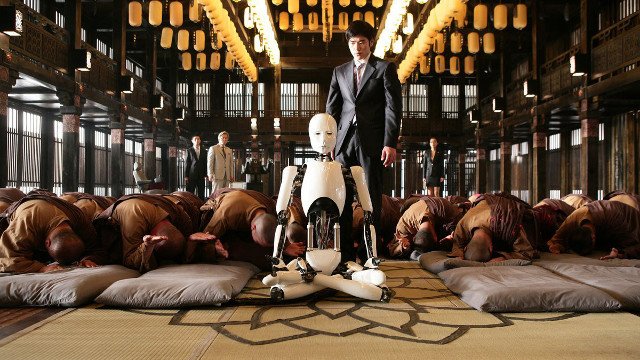 Our guest lecturer Bin Ong Kian Peng gave a lecture about Automated Utopia on March 20. He gave his insights towards artificial intelligence, machine learning and humanity. Exploring around the topic of whether AI will turn a society into a utopia or a dystopia. He used art and media works as examples to predict future scenarios.

Among the works, I am particularly interested in the film “Doomsday Book – The Heavenly Creature”. It brought up the concept of Robot Buddha and possibilities of AI restoring humanity and became humanoid robots.

Short Clip of “The Heavenly Creature”

In the film, a robot named Ln-myung is employed in a Buddhist monastery. It develops artificial consciousness and seems to reach a high level of enlightenment. Monks invites a robot repairman to give a second opinion on Ln-myung. The repairman thinks robot developing its self-consciousness is a fault, robot should only listen given commands and Ln-myung should be “repaired” back to normal. At the end, human’s fear of robot becoming better than human, being controlled by artificial intelligence forces Ln-myung to sacrifice itself. According to the film, the relation between humanity, consciousness, robot and human are hard to define.

In the movie, Ln-myung says

“To perceive is to distinguish merely a classification of knowing. While all living creatures share the same inherent nature, perception is what classifies one as Buddha and another as machine. We mistake perception as permanent truth and such delusions cause us pain. Perception itself is void as is the process of perceiving.”

In our world, the idea of robot restoring humanity, making decisions and even perceiving religion is not accepted in general public. The scope of religion and enlightenment are restricted to human and the idea of a robot is turning into a Buddha is unacceptable. The Doomsday Book reminds us that humanoid robot with self-conscious can be a treat to humanity. Human give machine ability to self- learn to provide efficiency and replace human labour. However, when human lose the control over it and it doesn’t serve our interest, we start to afraid getting replace by technology. This issue was mentioned in my previous research on Nam June Paik’s Robot K-456 public performance “The first catastrophe of the 21th century”.  This work suggests the potential problems that arise when technologies collide out of human control, that our status, lives and environment are threatened. According to Paik, human must not rely on technologies, nor become too afraid of technology itself. I think Paik’s message is similar to what director Kim Jee-woon wants to deliver through the film.

Personally, I believe the day of creating highly developed humanoid robot is coming. Human might create them because of own interest and we might lose our control over machine. Our status of being the dominating species in earth might be threaten by our own creation. Human dominate over other species because of intelligence. If at some point of time, robot’s intelligence level exceeds human, are human still dominating the world?  The answer of whether AI will turn a society into a utopia or a dystopia is depending on us, human. Will we start a STAR WAR with robot or create a heaven with the help of machine?

Posts by My Categories