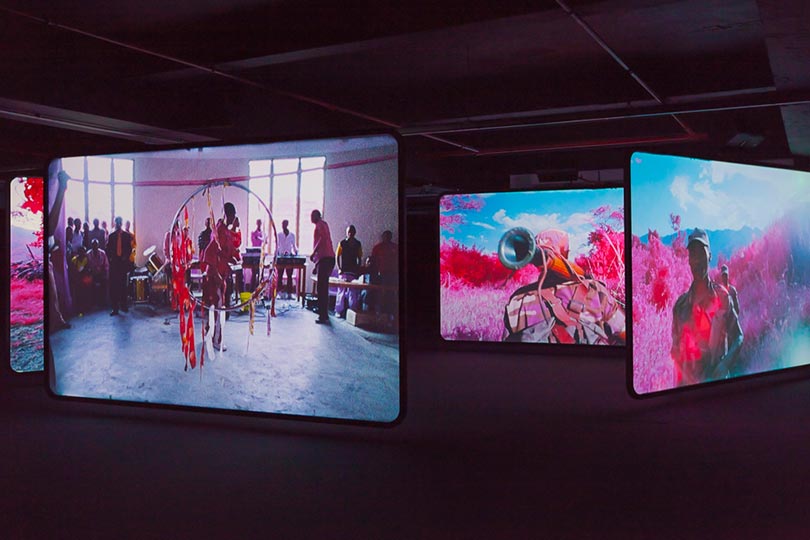 There is always a template. A 3 act structure in a story. However in Expanded Cinema, the audience in this expanded cinema gets rid of the structure, the spoon feeding of the story and they finds out the ending themselves. The audience would be more active rather than passive.

Doug Aitken
Doug Aitken (b. 1968) has created a body of work that explores the evolving ways people experience memory and narrative and relate to fast-paced urban environments.

The location at which the installation and performance art is held on a vessel in an open sea.

Main actress and other performers performs live on screen with 3 screens around her. The story goes in a way the actress travels from one point to the other.

The character is on an unexplained journey from one place to the other via plane, car and on foot. The character only interacts with herself as she leads a life of a journey alone.

Why use a vessel in an open sea?? Boat cause maybe it is a mode of transport. Maybe a metaphorical mean of isolation? Like a lonesome boat in vast sea. Hence, location as to where the installation is held is important. In addition, the artists statement of her works are important as the audience of that country he presents to may not get the context as it is not relevant to them.

Making reference to an old film which the song is constantly played throughout is ‘Only have eyes for you’.

Why he uses that song? It is a very old popular song. And covers of this song by others makes this popular. Spectators will find familiarity when they drive past that video screening

1920s have limited resources and cameras were not easily accessible unless you have resources and money. Whereas, 1960s is a period of change. Feminist movement, Cold war, Technology is on the rise, cameras are more easily available.

Ruyi showed us a couple of clips and asks us for the emotions we felt through watching these clips. And as usual, since the emotion is subjective to each film, everyone had different thoughts and feelings for each clip.

For this clip, there was a mixture of emotions for me. It was soothing and at the same time uncomfortable.

I believe the artist was intending to match the movement of the gears to the music or vice versa, and many of the time where I felt was soothing was when the gears or mechanism fit perfectly with the music. (The OCD in me is acting up)

However, I felt uncomfortable at times because the mechanism and music don’t go well together. IT IS OFF BEAT. Or when the note is prolonged, I’d expect a ‘clunk’ sound but it did not give me that satisfaction. ( The OCD in me is acting up again)

Visuals can be music as well, even without music. In our heads we would have created a sound that goes with the moving images. We see music.

Brakhage uses material experiment in his films where each film is like mark making. The film strip acts as a canvas and not medium for story telling.

With the use of multiple screens, audience is immersed and bathed in your work in that space; or even overwhelmed by the information provided given if that is the artists intention.

What you will look when you walk around the story. The authority of the story is question. Different modes of story and reconstruction of the Journalism whether the recounting of stories are reliable.

Left side of the screen doesn’t match with the soldier’s story. It makes you question Omer Fast as well as the Soldier’s account.

The message Omer Fast may be trying to express is that what the media shows to you can be very deceiving. Actors casted, exposes the lies . It is a take to mocking journalism as the abrupt cuts of the videos, locations of scenes and audio is all fake and post edited to how Omer Fast wants it to be.

Other than sexism, the female figure on the right is not using any word in her singing. She is evoking sounds that expresses what she is feeling inside. The male figure on the left has words to express himself and he does it with ease, and with a live audience listening to him. Women are not suppose to perform live infront of an audience as it is against societal norms of where she comes from.