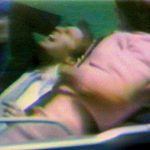 Is this burning an ETERNAL FRAME?

|| The Eternal Frame (1975) is a videotaped reenactment of the assassinated of John F. Kennedy’s assassination by Antfarm which seeks to draw attention to the power of the mediated image.   Antfarm is a collective of radical artists founded in San Francisco in 1968 by Chip Lord and Doug Michels (1943-2003) that sought to rebel against the conformative style… Read more →