The Essence of Mark-Making

Mark-making is the process by which lines, dots, marks, textures, smears, scribbles, drips, scratches and patterns put down using different tools (almost anything in this universe can be used) onto a surface of any texture or material to abstractly express emotive qualities, capture moments of life or simply to create an aesthetic form to be engaged with or appreciated.

Some notable artists who utilise mark-making in their works are:

Paul Jackson Pollock was a major figure in the abstract expressionist movement (Post WWII, 1940s, New York) who had a volatile personality and was a “raging alcoholic” (as quoted by my Art History lecturer) and specialized in drip painting. He carried out his action paintings using hardened brushes, sticks and resin-based paints while rigorously and passionately working his way around the canvas, splashing paint in whatever manner catered to his mood that day.

Some of his most famous works include:

Yayoi Kusama was born in Nagano Prefecture, Japan where she would do many paintings on her own, but her love of art was rejected by her family, compelling her to further develop her works in the United States. She is heavily influenced by the abstract expressionist movement as well and her 2D works often utilize a wide variety of media such as gouache, watercolours, pastels and oils to print repetitive patterns such as polka dots and nets for the entire area of a canvas (even the sides of the canvas would be painted), which creates an overall psychedelic effect, especially under certain lighting.

Actually, a few months ago I had the opportunity to visit the Yayoi Kusama: Life is the Heart of a Rainbow exhibition.

Asides from her astounding 3D works, her 2D works are equally intriguing. The colours she uses are very opaque, mostly vibrant which make a very strong statement. The variation in lines and shapes is also thus made very obvious. The fact that Kusama is able to persist with such repetitive patterns across an entire canvas never fails to impress me. Some of her paintings are littered with simple shapes like cirlces and stripes, but for some of them, you have to squint closer to really see it. For example, take a look at the 4th painting from the left in the top row (the brown and black one). Try squinting and having a guess at the title of the painting!

3. Gerhard Richter (no legitimate nickname for him but I call him Squeegee Man)

Gerhard Richter is a German visual artist who produces both abstract and photorealistic works (many others as well). He was one of the artists that pioneered new, objective ways to create abstract art, which in his case, he popularised the use of the squeegee.

If you watch the video below, you can see how he uses this massive squeegee-like block to slide across the entire canvas, where there is already paint layered out and a single scratch can reveal the myriad of colours beneath:

Most of his paintings have very distinctive lines that are quintessential to all his squeegee works.

The Meaning of Lines: Developing A Visual Grammar

After over-purchasing and hoarding a bunch of random items I could get my hands on, I decided to test them all out to see what kind of tools would make interesting patterns that would be useful. (I might have went a little overboard with the shopping list but it was interesting seeing some of the patterns they produced!)

Tea effect 3 – Photo by me. Poured the tea leaves directly into the ink before using the spoon to spread it out onto the paper. Gave rise to a grainy texture with a somewhat splotchy background.

Ruler effect – Photo by me.
I had to use a spoon to put some ink at the “starting line” first, before using the ruler to spread the paint over the paper. I think it turned out pretty neat! (though I would really use a smaller ruler instead)

Scrubber effect – Photo by me. Again, I had to use a spoon to deposit some ink first before I could use the brush to scrape it outwards. It gave rise to sort of a wispy effect since the lines produced were so fine. I also purposely let the paint drip down and now it looks like a thunderstorm. 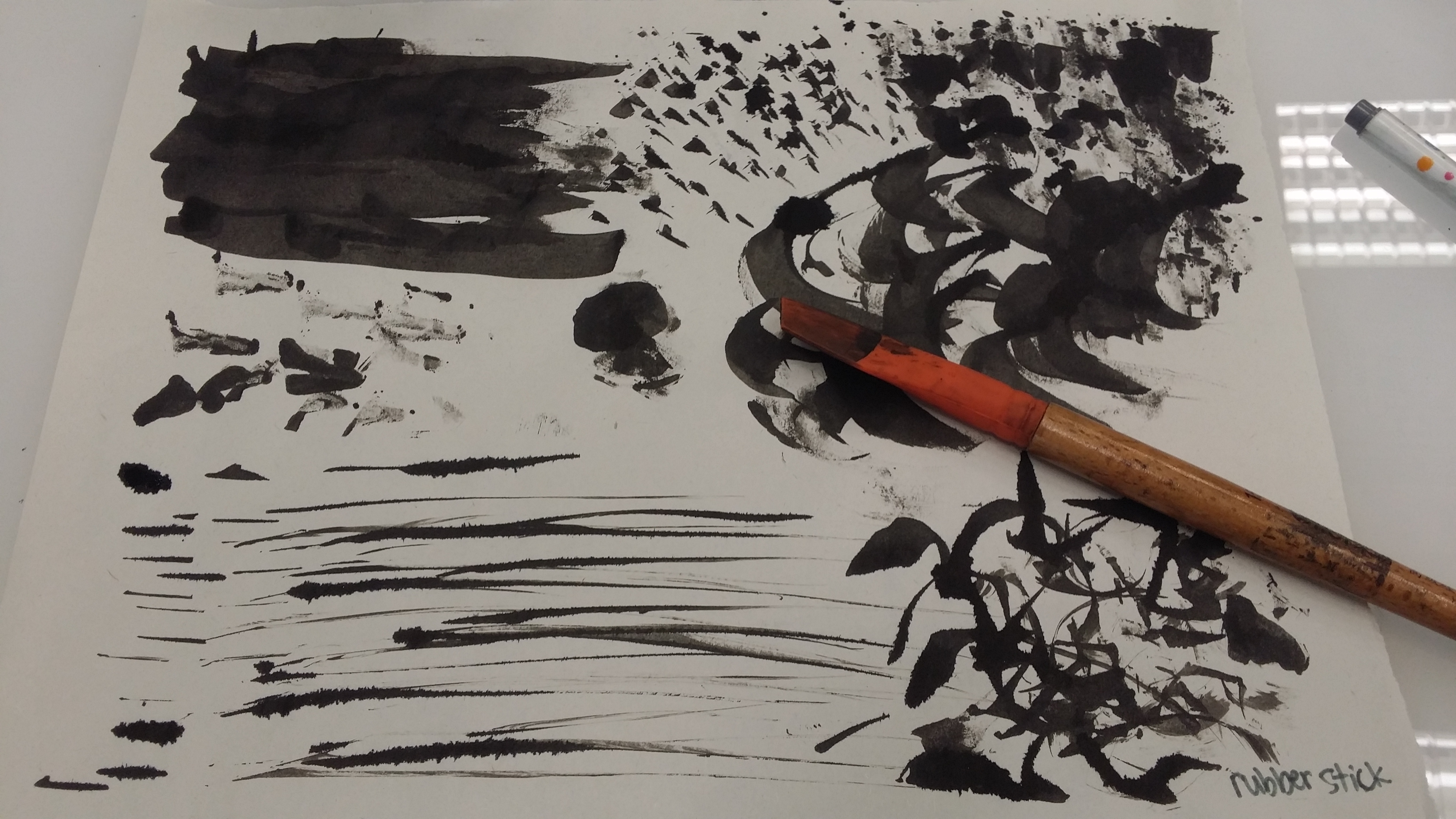 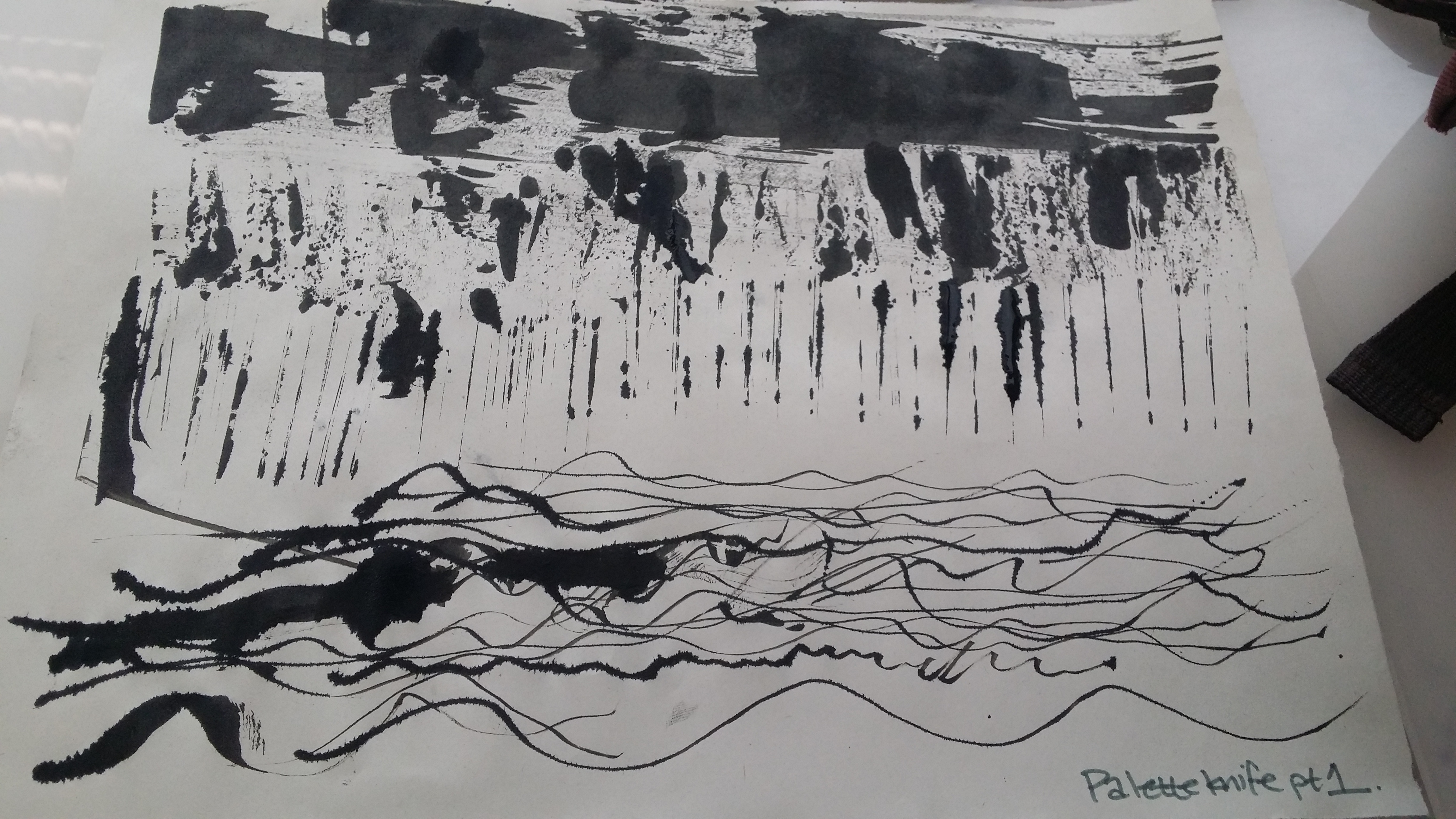 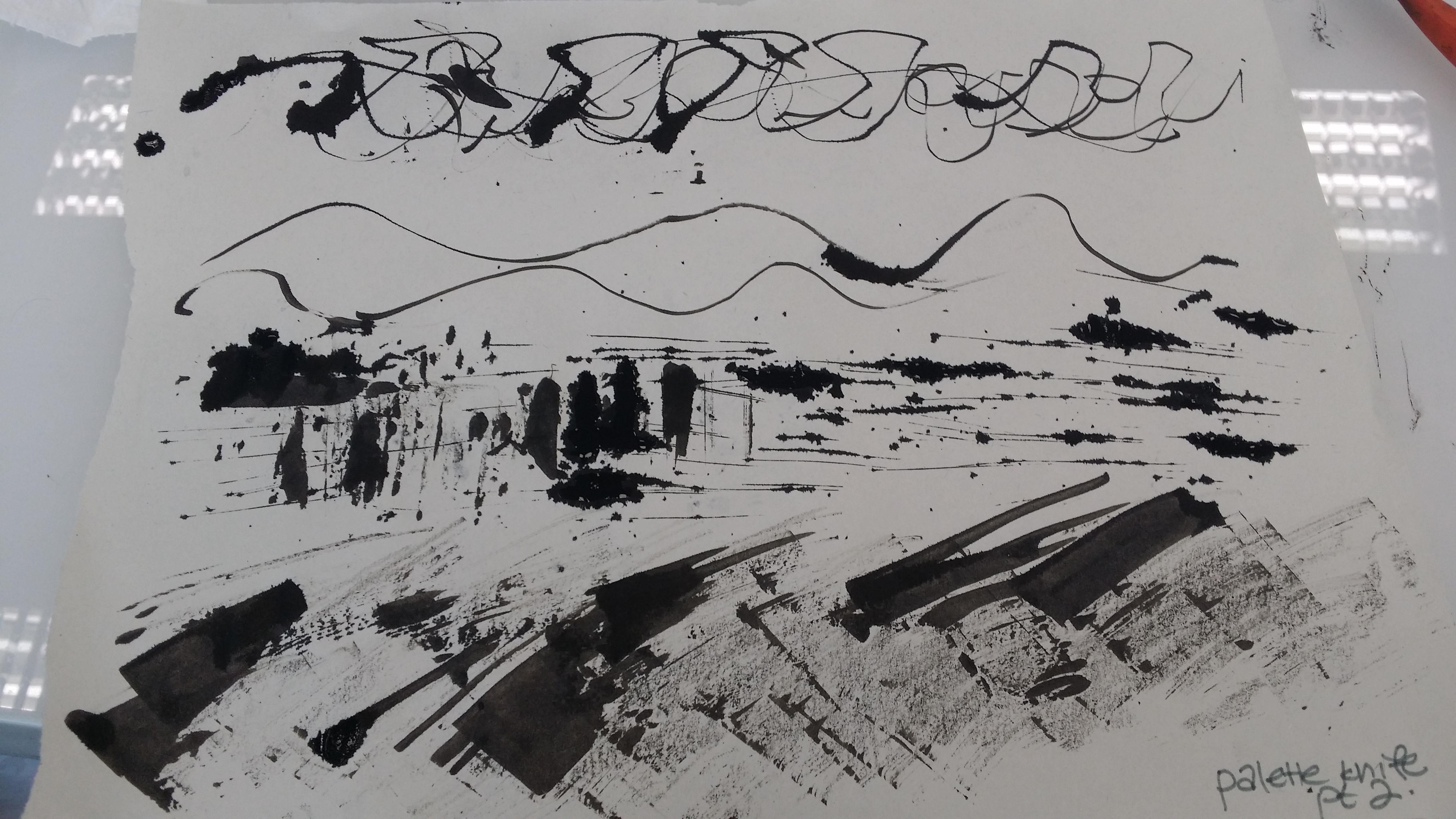 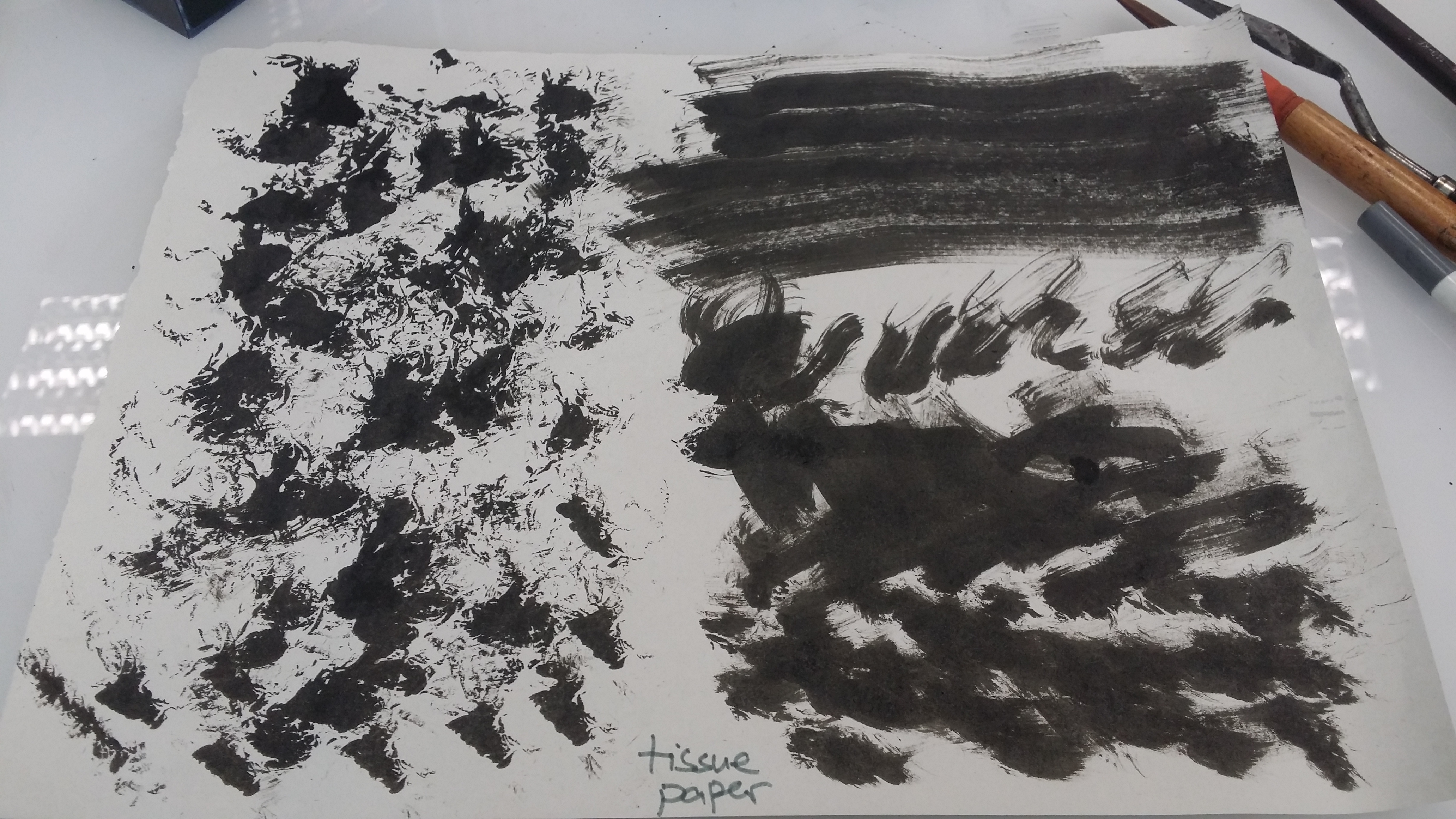 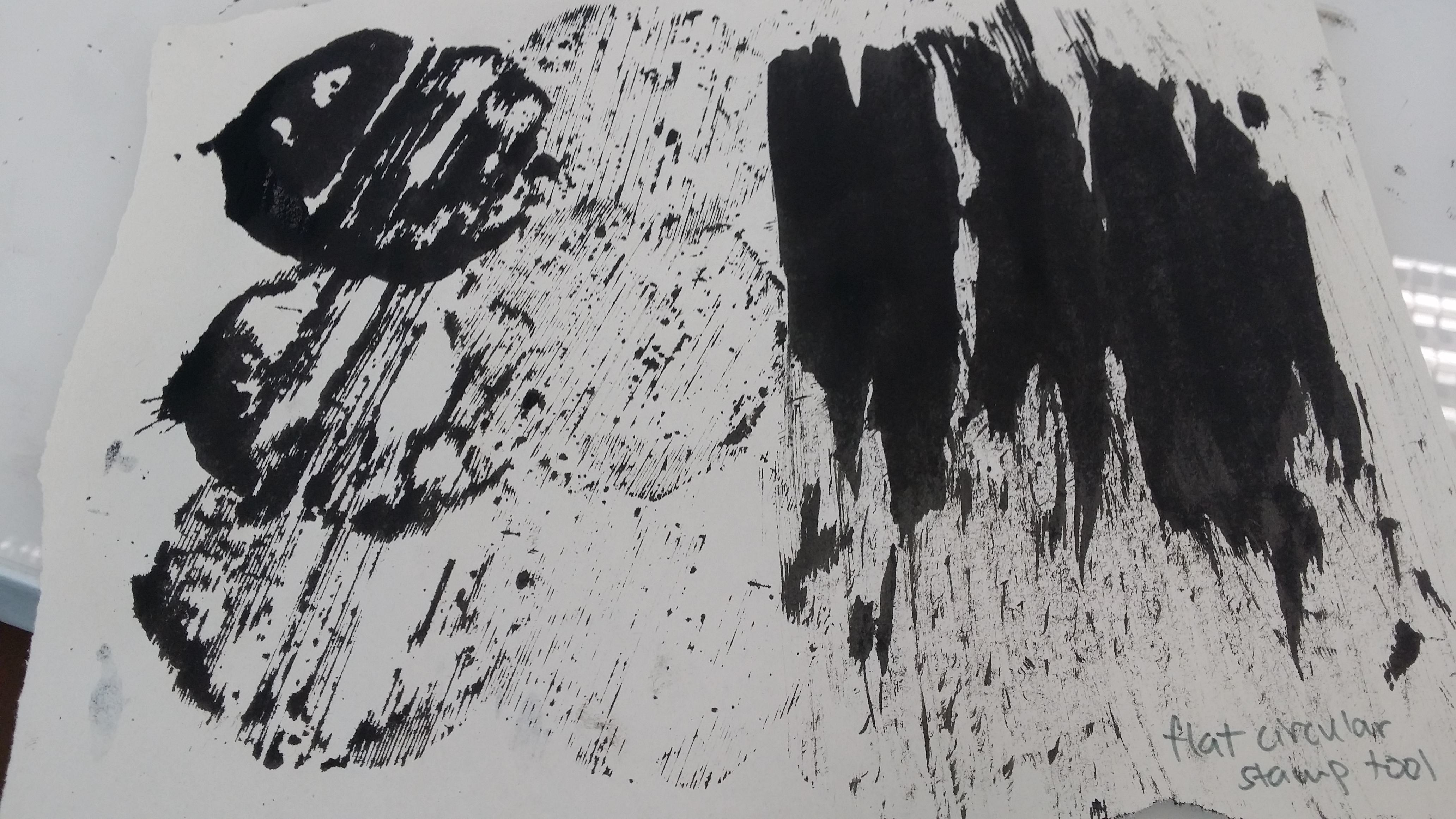 Love is wholesome and warm feeling, one where you feel like you are being in a tight embrace and protected. This can be illustrated by curved lines that depict convexity and roundedness, and lines should be favourably thin and light to show the tenderness of love. Curves can also either be relatively sparse to suggest the sensuality of romance or more closely positioned to generate more passion and zeal. Joy has a very vibrant, enthusiastic, ecstatic tone that can be showcased through more well-rounded curved lines as well, or zig-zagged lines radiating outwards to show pent-up energy being released. Joy can also be being pleased with status quo, such as enjoying a cup of tea in solitude in the early morning, and that can be expressed with more loose, wavy curves. For a prideful joy, tall vertical lines or steep diagonal lines can be used to indicate the celebration of superiority. For a sense of relief, there can be curves in the shape of a wave (The Great Wave of Kanagawa) to show something being held back before being calmly released, just like a sigh of relief.

Surprise has a positive connotation and is a rather transient feeling that is triggered by a sudden event, thus short lines, or small circles can be incuded. The spacing between these elements can also be considered, for example, having a cluster before gradually becoming sparse shows a sense of dispersement of shock. Curved lines with a point (also like multiple waves) and the use of diagonals to form peaks that grow out of a horizontal line also indicated something suddenly appearing out of the calmness.

Anger is a very intense feeling which can last from small waves of irritation to a long-held grudge. Rage or fury can be shown using looser curves thickness with varying that reach outward (rather than tight curls), to aliken the feeling to hot flames of rage. For irritation, short, bold, jagged lines can be used to illustrate the constant but rather brief spans of feelings of annoyance. Disgust can be conveyed using wide, convex curves that disperse outwards to express revulsion (sort of like the feelings you get in your stomach before puking). Bold but connected splotches can be used to show envy or jealousy; a lasting, deep-rooted grudge that someone is reminded of every now and then when they are in contact with the person they just are unable to come to terms to with.

Sadness is a pretty personal feeling that not a lot of people express openly, so it would be appropriate to have a cluster of elements together rather than spread out widely or evenly throughout the entire paper/medium. Drip lines or really thin, wispy lines can be used to convey the silent wallowing in grief, and give sof a sombre, gloomy feeling. For a louder kind of sadness, like anguish, deep sorrow or regret, wider curves can be used, rather than straight lines or zigzag lines because straight lines are not as organic as curves and our ability to feel sad can be owed to our roots as human beings, therefore using curves would give it a very natural feeling (it’s only human to feel sad).

Fear is also a very intense emotion, it is created by mostly external experiences and guided by our very primal instincts of survival. It is also much more prolonged than shock and has a negative connotation, unlike surprise. There is suspense, anticipation, a sense of unknown or any threats that serve to trigger a griping fear from within us. Thus, there can be wide curves sprouting outwards, or exaggerated zigzag lines (like the ones on cardiograms) to indicated a racing heartbeat, or even short little jagged lines to show a less intense variation, nervousness.

An uncontrollable feeling of bliss in a moment that seems like it would last forever.

Previously tried using watercolour markers to create long flowing curves with gradient but looked too dull and static. Inspired by German artist, Gerhard Richter, who popularised the use of a squeegee for his abstract art works in a wiping/stamping motion, I decided to recreate a mini squeegee piece using my long ruler and some Chinese ink.

Pleasure is a rather uncontrollable emotion that comes in the heat of the moment. Can be fundamental (eating, exercising, social belonging) or higher order (experiencing altruism, viewing art). The feeling always comes in a sudden rush/wave and thus by using the ruler to quickly swipe across the strip gives it a sense of a quick motion, ink spills out of dimension as well to show that it is overwhelming.

Through this project, I have learned that the effects of designs on posters, websites, advertisements etc. may largely go unnoticed, they are extremely deliberate and directed in such a way that leaves a huge impact on our subconscious mind. Designers certainly do not add polka dots into a design just because they like polka dots. There are very specific reasons why they used a certain design in order to evoke a certain mood upon the viewer.