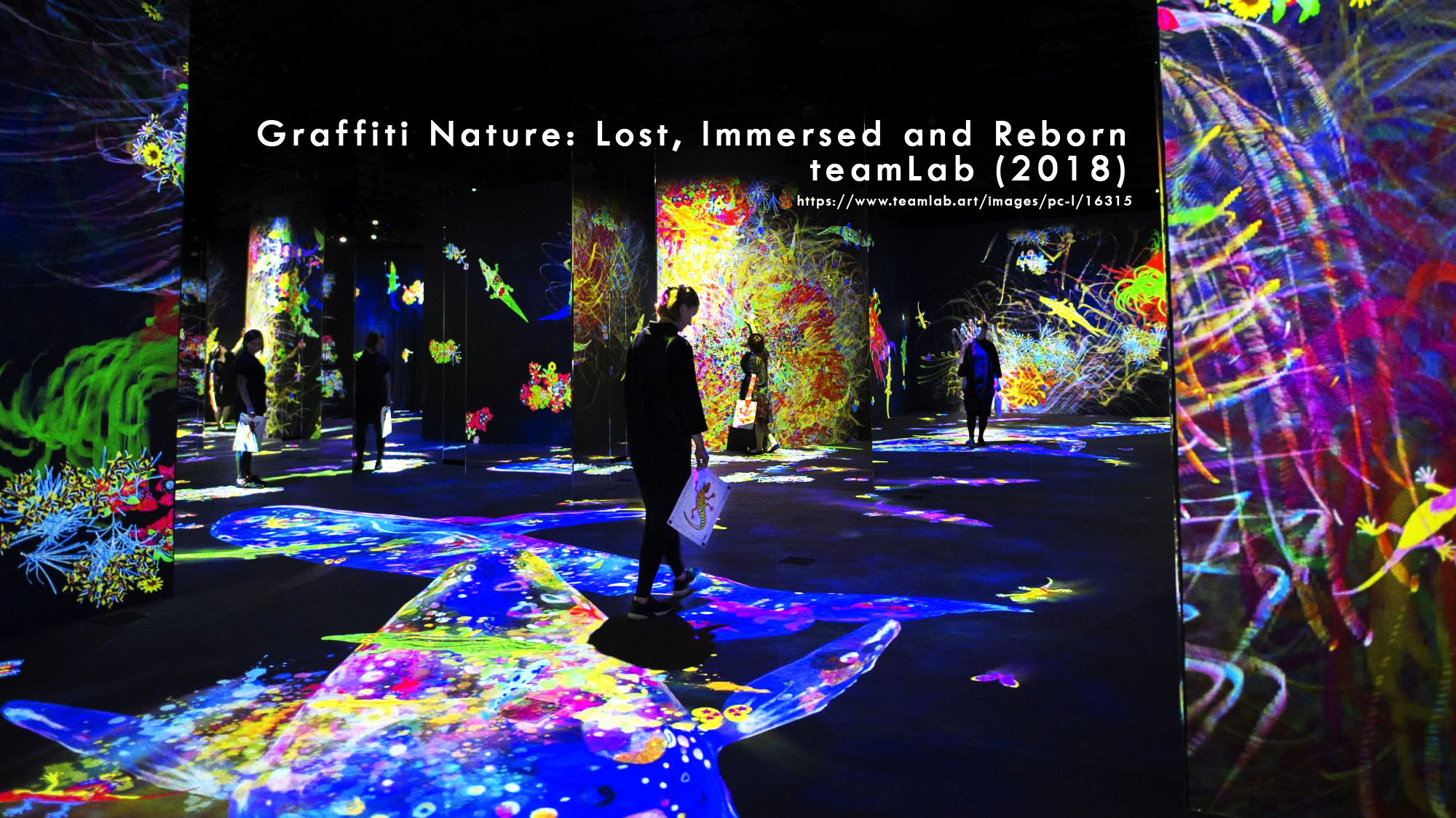 One of teamLab’s most recent art installations Graffiti Nature: Lost, Immersed and Reborn (2018) is situated in Amos Rex, an art museum in Helsinki, Finland. It is just one of the many exhibitions that teamLab has globally in countries such as France, Japan, and even Singapore. teamLab is based in Japan and is an “art collective” of “ultra-technologists” that consists of engineers, programmers, CG animators, graphic designers, editors and many more positions and is headed by Toshiyuki Inoko. The interdisciplinary nature of their team is well-reflected in their art installations that often deal with using light as paint and the world as their canvas (Mun-Delsalle, 2018). teamLab utilises interactivity and advanced technology used in the development of hypermedia to blur the boundaries between the physical and virtual world and elevate the extent of immersion in Lost, Immersed and Reborn.

Interactivity is a forte of this installation, and further enhances its immersive quality. In Nobert Wiener’s Cybernetics in History, he discusses about the role of an artist as a ‘steersman’; a designer of a ‘catalyst’ that enables a stable reciprocal exchange between human and machine (Wiener, 1954) and we are able to project this concept unto the context of Lost, Immersed and Reborn.

In this digital interactive installation, a virtual ecosystem made of projected light fills up the entire room. Participants invited to interact with the myriad of virtual flora and fauna within by colouring in templates with contours of animals and flowers and scanning their drawings. Once their drawings are scanned, they are immediately transformed into animated graphics that appear three-dimensional and join the rest of the virtual ecosystem where participants are then able to illicit responses by ‘touching’ them. The flora and fauna to which they react differently when ‘touched: the animals within the ecosystem can ‘eat’ each other, if participants do not move, more flowers will grow, if participants step on the animals, they explode into a splat of colours. teamLab uses light as canvas, essentially incorporating real life characteristics of nature into this virtual ecosystem.

The idea of entropy within this piece is evident with how teamLab partially gives up ownership of the artwork to participants, who have the freedom to create and interact with whichever virtual element to illicit whatever response they chose to evoke. teamLab’s use of sensors reminds me of John Cage’s Variations series, whereby kinaesthetic sensors were used to record and evoke different artistic outcomes. In Variations V, the dancers were the participants who created different sounds using their movements while in Lost, Immersed and Reborn, the public are the participants who created different visual outcomes within the space using their movements which are similarly detected by sensors.

Since participants’ actions were unpredictable,  the visual dynamic of the room was constantly changing in an unprogrammed and indeterminate manner, in the sense that every other day, the change in the room’s appearance would be different from the day before. With reference to Roy Ascott’s quote on interactive art:

“Interactive Art must free itself from the modernist ideal of the “Perfect Object.” (Ascott, 1966)

teamLab has successfully facilitated an organic outcome in Lost, Immersed and Reborn resulted from the unpredictability of participant’s actions, something that would not be achievable without the participation of both man and machine. Giving participants the responsibility of creating the artwork heightens its immersive factor since participants feel like they exist in and are able to affect the virtual world.

Undoubtedly, technology is the backbone of teamLab’s artworks, including Lost, Immersed and Reborn. The state-of-the-art technological devices that teamLab employs bank on a long history of technological development. Earlier works such as Sensorama were limited by the level of advancement in technology.

In Sensorama (which was launched in 1960) although technological features such as chemical smell simulation and binocular vision was incorporated, interactive features like a knob or joystick which would translate physical force into a response in the virtual world was largely absent. This made the experience still rather passive and consequently less immersive.

A later example of Aspen Movie Map (launched in 1978) had a touchscreen function which enabled participants to make associative and non-linear choices along the drive route. However, there were still limitations such as only enabling the participant to view the route in intervals of 10 feet and only being able to move in a fixed number of directions and made it hard for participants to be fully immersed in the virtual driving experience.

In contrast to these rudimentary works, the advancement of technology has achieved immense amount of success in enabling the recreation of elements of reality into the virtual world. Current new media is able to expand the physical world by transcending its boundaries. teamLab uses software such as Unity to generate three-dimensional graphics from the scanned images in Lost, Immersed and Reborn.  In this way, art is transferred from a physical medium to a digital medium that acts as a representation of participants’ telepresence in this virtual ecosystem. The virtual ecosystem also acts as an ‘informational surrogate’ (Fisher, 1989) that stores a large volume of digital data that helps to mimic nature in a digital medium, for example how the movements of a lizard are replicated in the virtual environment. The flattened three-dimensional graphics also showcase teamLab’s “Fold, Divide or Join” principles of viewer centricity inspired by the concept of Ukiyo-e as Japanese ultra-subjective space, essentially creating a stereoscopic and kinaesthetic visual within a physical room to better simulate a first-person immersive experience.

The hardware used in Lost, Immersed and Reborn, includes the use of stereoscopic sound devices, light projection and sensors, which allow participants to be immersed seamlessly into the organic virtual ecosystem, choosing where they want to go and where they want to touch to evoke a response. The pace at which the animals move or respond is controlled by the participants, and not passively moving in a programmed manner at a fixed time interval. With the help of technology, the potential for an installation to grow as an ‘informational surrogate’ becomes immense and the number of possible ways to duplicate reality increases as well.

This can be best represented by the Reality-Virtuality Continuum (below) which presents the entire possible spectrum of immersive works as a category:

It can be observed through previous VR works that as time passes, developments in technology allow for the creation of more complex systems featured in installations that expand the boundaries of computer-human interface towards invisibility, essentially pushing more VR works towards the direction of reality (i.e. augmented reality games like Pokemon Go or camera filters). As an installation that incorporates virtual reality (VR), Lost, Immersed and Reborn is eligible to be considered on the reality-virtuality continuum (Milgram, Paul & Kishino, Fumio, 1994) (Fig. 1) as augmented virtuality since it incorporates real time information into a largely virtual world.

In Lost, Immersed and Reborn, there are various modes of interaction including scanning, touch sensors and sound by which physical force translates to digital response. However, many elements that could potentially make it “The Ultimate Display” (Sutherland, 1965) which is defined to be “a room which a computer can control the existence of matter”.  The perfect sandbox would give complete liberty in terms of decision making, engage all five senses and resemble reality so closely that there is suspension of disbelief without thought. teamLab’s design philosophy of bringing people together and co-creativity reflect extremely well in Lost, Immersed and Reborn, even if it’s within a virtual space. Perhaps in future artworks, teamLab might be able to explore the incorporation of other cues that engage more senses simultaneously such as smell and taste; the possibilities of immersion to explore are virtually endless.

Wiener, N. (1954). Cybernetics in History. In Multimedia: From Wagner to Virtual Reality.