Oulipo, short for Ouvroir de littérature potentielle, is an experimental literature group made up of people from different professions – from poets and novelists to engineers and mathematicians. Their works, mostly, are set within certain literary constraints; creating challenges to seek new forms and structures in order to find unknown and unbeknownst possibilities.

As seen in the video below, the results are playful and often humorous.

What the Oulipo intended to demonstrate was that these constraints are felicitious, generous, and are in fact literature itself. What it proposed was to discover new ones, under the name of structures.

These manipulations of language structures reminds me of the first rule from Lev Manovich’s Five Principles of New media, where he wrote about discrete units. An Oulipian example of playing with the discrete units of language would be La Disparition by Georges Perec – a novel without the letter E. At 26:15 in the video below, you may view a description of the novel.

Having read The Garden of Forking Paths as well, I can see how New Media owes much to traditional literature. Not only did it introduce hypertext, the relationship between the reader, author and text equates to the viewer, artist, and artwork. In a way, literature may be referred as the “source-text” and new media – the said deviations.

I think the most interesting thing about the Oulipo, even though it is not an original idea today, is that mathematics may play a significant role in the creative process. It can help in conjuring and permutate situations, such as Matthew’s algorithm as seen in 25:50 of the video below.

(You may try the algorithm in the link below)

In terms of application in design art, Oulipo has inspired many other -po movements such as the Oubapo which is comic version of the Oulipo. They created scrabble inspired game called Scroubeabble, that allows the players to generate comic strips in an uncommon way.

The application of ‘cross-breeding’ fundamentals from different fields, is rather ironic. Despite still applying restraints, it also removes limitations. It puts the creator in a new environment , perhaps a new perspective that does not exist within one’s home-field. It brings the boundary to light that there are physics of one subject that cannot exist in another. But as Oulipo has proven, that might not be true. 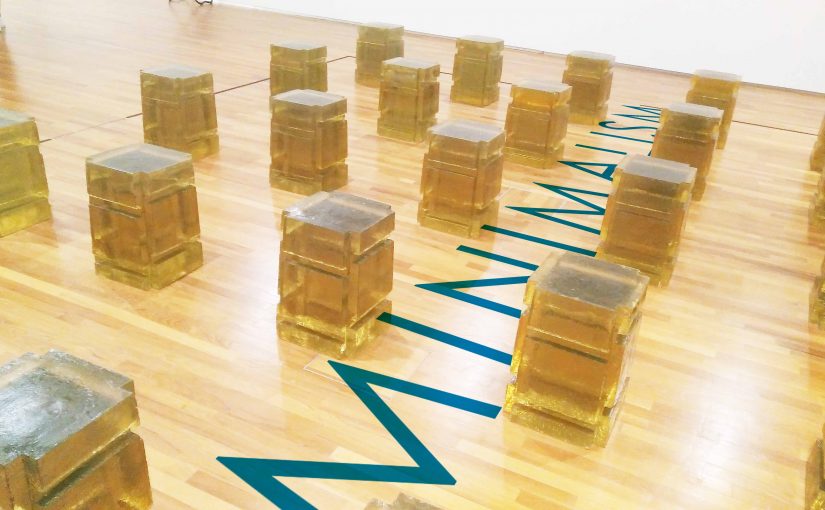 Minimalism, in my opinion, was one of the more difficult art movements to comprehend and appreciate. The artworks are highly conceptual. At the surface, the style is extremely simple with no visible value and many may cast it off as ‘too easy’. One thing that I noticed about Minimalism was that it had a lot to do with space and experience. There were less of “stand and watch” artworks and more of alluring objects that tempts interaction of action or senses. My favourite example of this was Ai Wei Wei’s A Ton of Tea.

As a tea lover, standing in front of this giant tea block, I kept dipping my head to get a whiff of it. It had a familiar scent which I guessed and later confirmed was Pu’er (普洱茶）- a common domestic Chinese beverage easily found in any Chinese dining. Location and placement was significant to this piece as Ai Wei Wei originally wanted the cube to be placed in direct contact with the floor but because the tea was fragile at the edges, the timber pallet beneath was needed for practicality. However, if that were so, the geometric cuboid will create a direct relationship with the space and surroundings. That way, it engages the minds of the viewer to ponder over the industrial tea block, from “What?” to “Why?”.

Rachel Whiteread’s Twenty-five spaces, I believe, also arouse strong urges among its audience. I almost sat on it, thinking they were chairs. So I assumed others also have the same reaction. This work varies depending on its location, at Tate Britain it was a hundred but here it was only twenty five. Does the amount matter? Does the numbers change the meaning?

This piece was about bringing obscurity into light and its effects work better in numbers. The more populated, the more prominent. Unlike Ai Wei Wei’s Ton of Tea, Rachel Whiteread plays with normality. If not told, the artwork can be difficult to be identified.

“Where space stops, her sculpture begins.”

As Twenty Five Spaces was a reference to Bruce Nauman’s (A.k.a. the guy walking contrapposto in a square) A cast of the space under my chair, we can see the resemblance of inducing new perspectives with the manipulation of time.

A cast captures a moment, its surface holds the imprints and contours of the mold, leading the viewer back to the absence of its origin. This can be seen in the plaster cast of Pompeii victims. It can also be noted that memory of something dead retains more life than one that is still living.

Humans think and understand better through space in relation to self.  E.g. “Up” is usually good. “Down” is usually bad. This is because one is upright when healthy and alive, laying down when sick or dead. Using space to communicate with the viewer is to speak in the universal language.