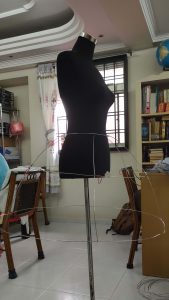 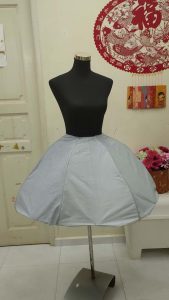 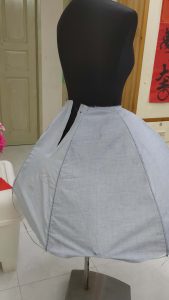 Identity is an elusive concept. It is a thing that presumably everyone should possess; to know who and what they are. But if there is no singularity in a person’s identity then which is the true you? Under French Psychoanalyst, Jacques Lacan’s theory – The Mirror Stage, describes a scenario where a baby meets its own reflection for the first time. That is when it discovers itself, recognizing ‘me’ to be different from the objects in its surroundings. The discovery is centered around desire which is directed outside. Thus, “The not you, are a fundamental part of you.”

IN/EX draws inspiration from the mirror-ing and fluctuation of desires. The idea is mainly translated in the tech part whereby following the sight of the wearer, the exterior is reflected within, in the illuminated skirt. The veil and transparency of the garment is meant to represent the husk of the human appearance that is influenced by external happenings. The face of the mask is best to be covered with reflective elements for the mirror-ing aspect but when attempted it seemed to overpower just the mask and I intend to scatter some around the skirt to bring some balance to the work.

I was one of the two that were going to handle the music for the fashion show. Unfortunately, I was not present for the last lesson and am not sure if anything about the themes were discussed. But I wanted to create soundscapes tailored for each garment to bring them into spatial realm. Perhaps cyberpunk inspired.