“The notion of origins, the promotion of inexpert forms of expression, as well as the “discovery” of the uncharted subconscious realm as unveiled by Sigmund Freud, unleashed a creative frenzy in the era of surrealism and resulted in the invention (or reinvention) of many drawings and drawing-based techniques: Automatic drawing, …” (Jones, 10)

The book ‘talks’ about chance drawings and collages with the example of Jeans (born Hans) Arp, a German-French poet, artist etc. He had a peculiar way of writing his poems where he would “close his eyes and randomly underline words and sentences in newspaper articles and advertisements that would become the foundations for his poems.” (Jones, 19)

“For Arp, chance manifested the order (or disorder) of nature to which he aimed to connect, rather than his unconscious. His so-called automatic drawing beginning in 1917, for example, are derived from his wanderings in nature, not from the wanderings of his mind. Drawn after his habitual nature walks, the works capture Arp’s recollection of trees, branches, and other plant life.” (Jones, 19)

“Essential to the process was speed. “When one goes very quickly, the drawing is mediumistic. as if dictated by the unconscious.”” (Jones, 25) So the faster you draw, the less you think. Therefore the drawing is more from one’s sub-conscious.

In the same page it also mentions Joan Miro. The “loosely drawn and schematic nature functions like multivalent pictograms or signs; that is a single form may connote several different meanings.” (Jones, 27)

After gaining some knowledge of automatic techniques, I became very eager to try them all out. 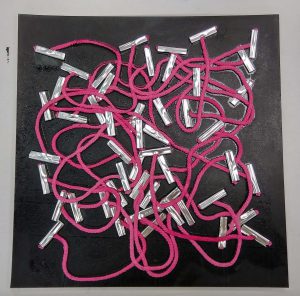 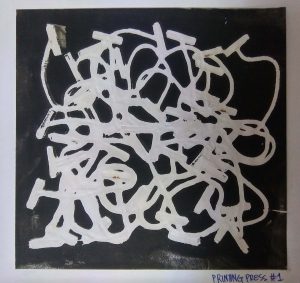 This is the first mono-printing I did. I just played around and see what effects it would create. 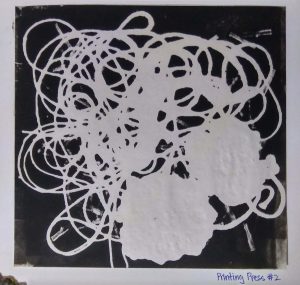 I tried putting crochet flowers in to see if the ink would penetrate the tiny openings. They did not; perhaps because the strings were knotted too tightly. 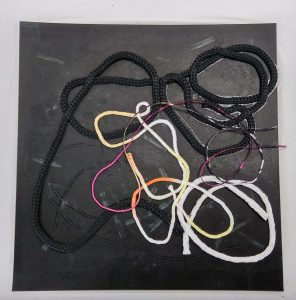 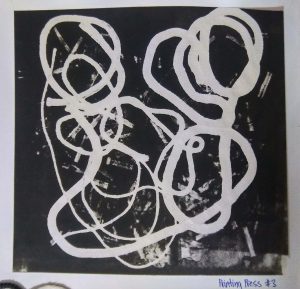 Here I tried with strings of different thickness. 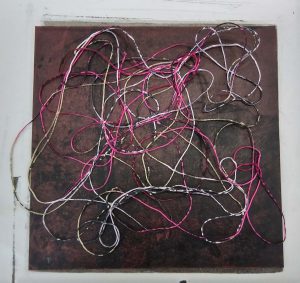 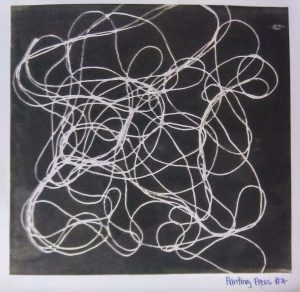 … and strings of a single width… 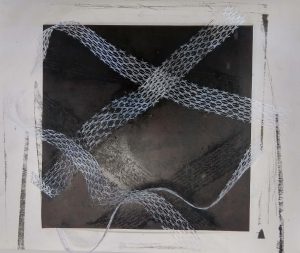 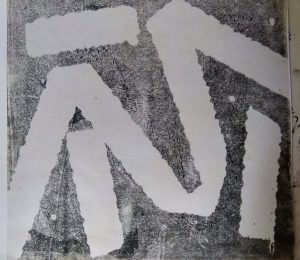 I thought mono-printing a net would result in a print of a net because the ink would have passed through the holes of the net. But that did not happened; with and without the printing-press. 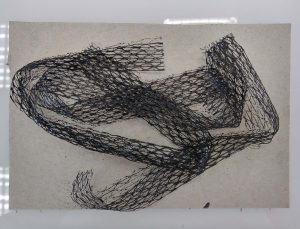 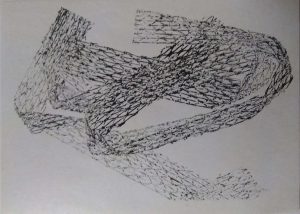 I was able to achieve the print of the net only by inking it and pressing it under the printing-press. 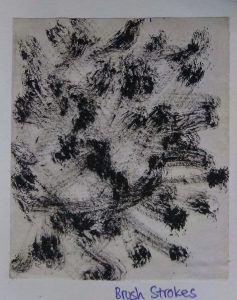 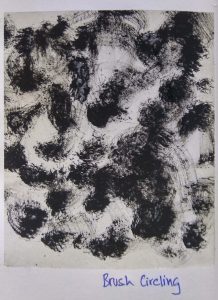 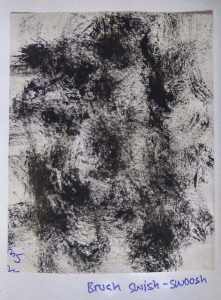 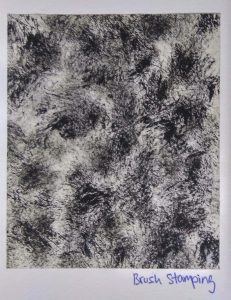 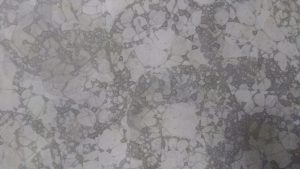 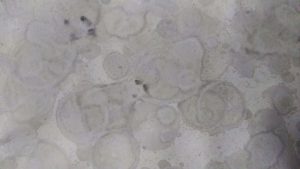 Bubbles bring about a dreamy effect. They are related to positive emotions; I could use them for Joy, Love or Surprise. 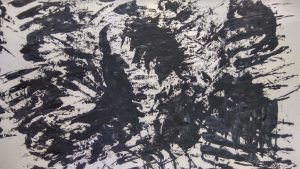 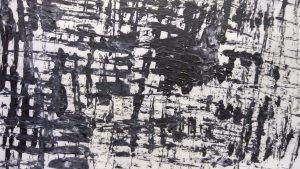 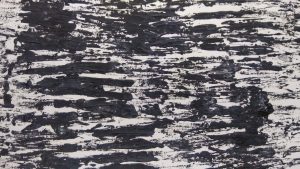 I did not expect the stamping of a fork would look this terrifying and intense. 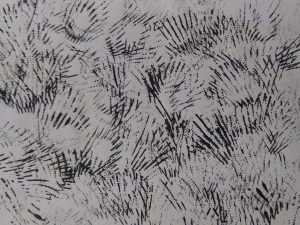 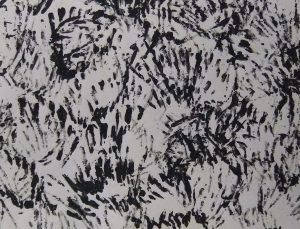 These are prints made from the stamping of seashells that I picked from a beach in New Zealand long ago.

I made an attempt with pressing paint between papers that mixes the paint and creating interesting vein-like texture.

I was very interested in the Fumage technique and wanted to try it for myself. 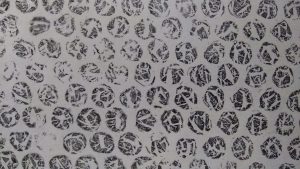 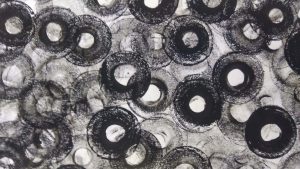 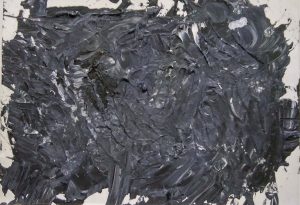 Here I tried to make the impasto textured effect with acrylic paint and a fork. The attempt to keep the swirls of black and white was a failure; and it was not as textured as I liked it to be. 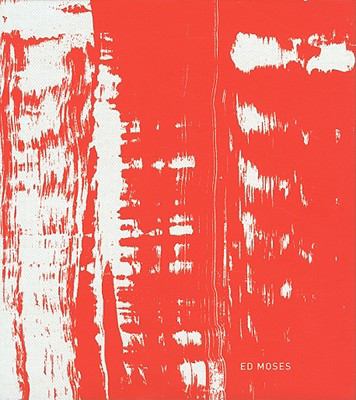 I was going through all the artist reference listed in the project brief and Ed Moses’s drawings really stood out to me. The images that turned up when I googled “ed moses drawings” really drew me in and my mind sparked ideas for the project.

However I found that it was quite a challenge to search information online. Everything was so private since the museums did not give anything away. So I went to the ADM Library to borrow the Ed Moses book which was much easier since it had all that I was looking for. The book allows a more intimate connection between the reader and Ed Moses because of the interviews recorded in it.

From what I have gathered, Ed Moses does a lot of experimentation on materials and techniques in his work. He is constantly taking risks, trying out new materials and testing new forms; moving away from his comfort zone.

Ed Moses used resin for his Hegemann Series and I thought it was really interesting. In the book he stated that by putting the canvas face down on a big Mylar table, he could pour resin on the backside and it would bleed through the canvas out to the edge. He would then put fiberglass cloth around the edge to give it some structure. When it dried, he would peel the whole thing off and the result will be a surprise. The resin embedded in the canvas, as were the snap lines- they turned out shiny in some places and flat in others.

Why do you paint on both sides of the canvas?

That was what Frances Colpitt, a professor and Deedie Potter Rose chair of art history from Texas Christian University, asked Ed Moses. He mentioned of his discovery of ‘ghost’ painting when he reversed the canvas and the ghost images came through, which he liked a lot. So he wanted to put some kind of mark to it that indicated he made it, rather than being ‘found’. His idea of these ‘ghost’ paintings really intrigues me. It is like recycling an artwork when you don’t like it. Or creating a 2 in one.

Below are some of the works that I picked out from the book.