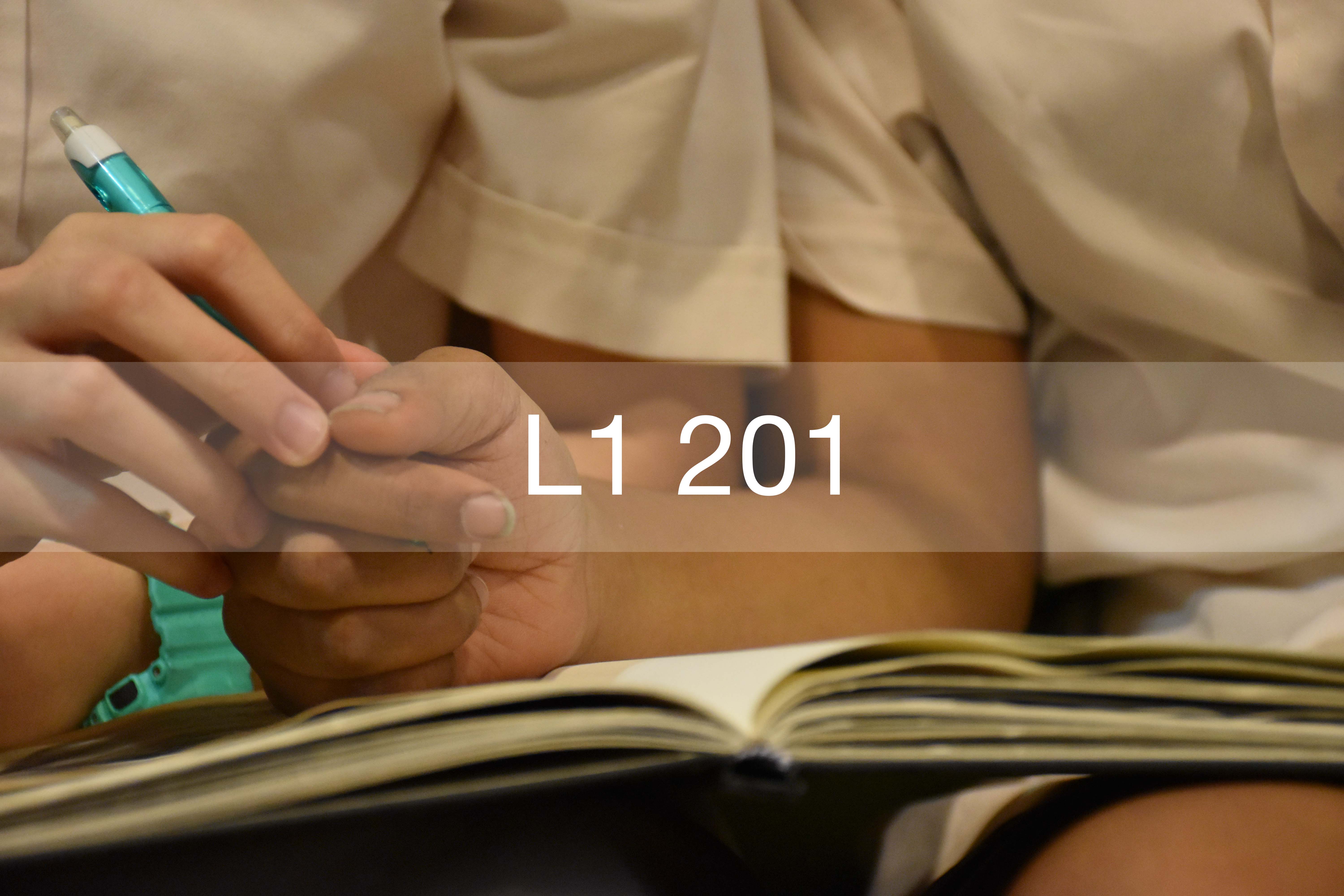 Our first proposal was rejected because our character personalities were too vague and there were too many elements that we wanted to address. We had the conservative parents, the lesbian relationship and cancer for extra dramatization. It was too complicated. Thus we narrowed the story down. Focusing on just Sarah, a star student holding on to a forbidden forlorn relationship. 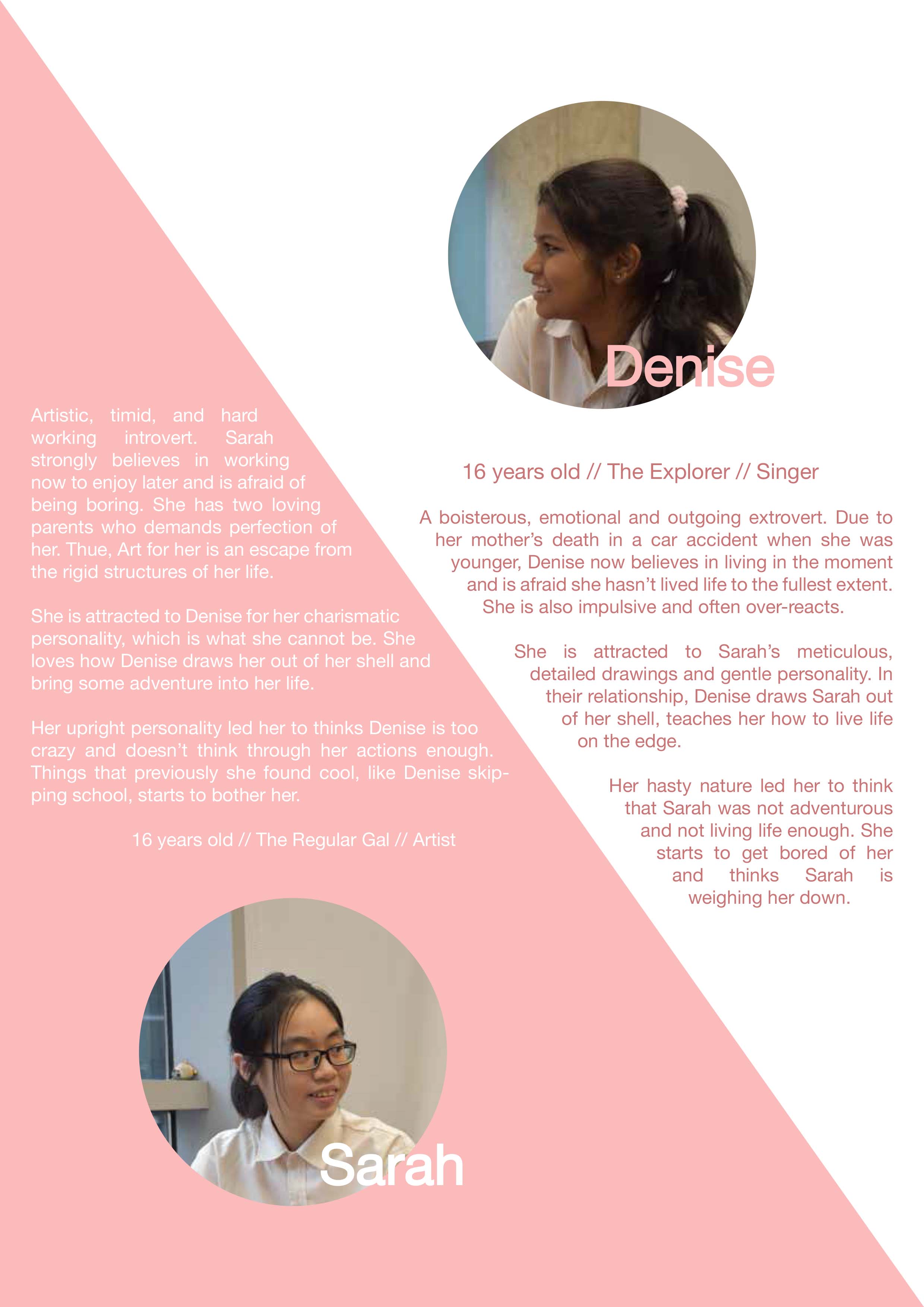 What draws them together?
– Common love of art: for Sarah, it is an escape from the rigid structures of her life. Denise isn’t very good at drawing but she appreciates art for its beauty (which she thinks is very important in life)
– Opposites attract: Sarah drawn to Denise for her extroverted, charismatic personality, which is what she cannot be. Denise drawn to Sarah for her meticulous, detailed drawings and gentle personality.
– Denise draws Sarah out of her shell, teaches her how to live life on the edge.

Why did they break up?
– Sarah’s timid nature starts to get on Denise’s nerves. Denise thinks she’s not adventurous and not living life enough, starts to get bored of her and thinks Sarah is weighing her down
– Denise finds the fact that they have to hide their relationship too annoying.
Sarah thinks Denise is too crazy and doesn’t think through her actions enough. Things that previously she found cool, like Denise skipping school, starts to bother her
– It gradually becomes increasingly apparent how little they have in common
Fight about each other’s lifestyles
– Denise gets a new girlfriend who is equally as crazy, but Sarah cannot move on and keeps their gifts in her locker

The story is told in a non-linear narrative through a blog, a video and the locker installation. The blog would tell the whole narrative in text posts. The video is a flashback of happy memories and the locker shows how Sarah is unable to move on from her broken relationship with Denise.

Bala was in charge of all the writing so you may read more at her post-> https://oss.adm.ntu.edu.sg/bala0043/4d-interactive-narrative/

I played the role of Sarah for this project. The shooting went fine other than the bad weather and the awkwardness of acting. It was quite a struggle restraining our laughter and getting into character for the intimate scenes.

I was trying to seem infatuated but being a person who rarely show any expression it was difficult. Also because I cannot really control my face muscles for the desired effect I just look tired of Denise terrible guitar playing skills.

I also had to do recording for the narration of the video which took several tries because we had to match the length of the video. Also because I had to get into character and try to carry Sarah’s emotions across. I was going for a solemn tone. Something serious, sad and empty. Something melancholic. I try to start out happy and sweet as if I was talking about a dream and change my tone at the end as it turns into a nightmare.

I remember our highs in hues,
like the color of her eyes
as the sun was setting;
the pale of her hands in mine,
and the blue of her smile.
I remember our sorrows in shades,
like the gray of the shadows,
which loomed that day,
and the white in her lie
when she promised to stay.

Original pacing lasted only 30 seconds and our video was a little over a minute.

Final recording of one minute after Syadza helped  guiding my tone and pacing. We counted about five seconds interval between each phrase.

Syadza was in charge of the video editing; you may head to her post for a more detailed explanation-> https://oss.adm.ntu.edu.sg/syadza001/documentation-of-the-last-letter/