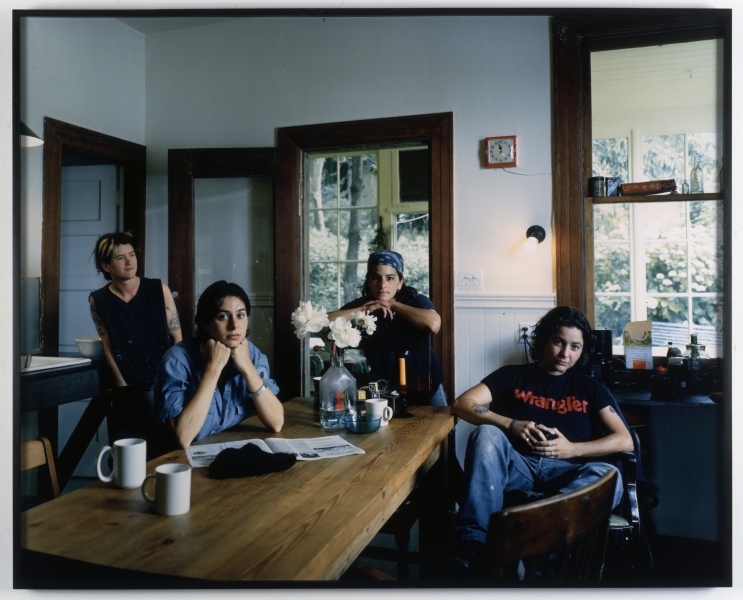 Catherine Opie decided to wear a hood in this piece because she wanted the focus to be her body and not the distortion on her face. It is about the existence of the word “Pervert” and what it meant. The politics lie in the fact that she dared inscribe it on her body, it does not lie in her eyes.

Why would she do this?

This piece were made in reaction to the gays and lesbians coming out of the closets during that time. All the sudden appearance of homosexuals segregated society and Catherine Opie wanted to push the viewer’s boundaries of normality; challenging our cultural code for relationships.

Catherine chose the background to reference seventeenth century paintings. The photo is took with intent of having a fruit bowl over her head, which queers the image with a little humor.

In her words “You’re looking at this juxtaposition of cutting of two stick figures, you know, women holding hands, with this comic fruit bowl over my head in the fabric.” https://transatlantica.revues.org/6430

According to the creator this piece was made after the break-up of her first domestic relationship and she was working our her ideas of longing. It is also a representation of what a queer child might make at school.

Not all her works that tackle homophobia are so intense. The above is a photo of her son in a tutu and tiara.

For the Domestic series, Catherine Opie rented an RV and spent three and a half months traveling the states.  She wanted to complete the story of domesticity in a show that she attended.

“One of the things I always think about is who I want to have conversations with, what does it mean to create history related to a history that is already present, the need to add a conversation to a given situation, because something is not being represented, something is left out of the telling of the story. ”  https://transatlantica.revues.org/6430

Catherine Opie also documents other events such as the Inauguration and High School Football.

Catherine Opie’s photography style is nothing special it is not especially aesthetic but rather mundane. Just normal day to day lives that most people can relate to, which really ties in with her concept of interconnection.