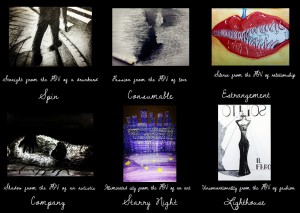 Above are my 6 finalized compositions for project 2. Following the direction of making non-digital artworks and exploring new visual concepts. My main purpose in the process of completing Project 2 is to explore the Gestalt principle as well as to establish visual structures in my works.

A Straight line from the POV of a drunkard is Spin. 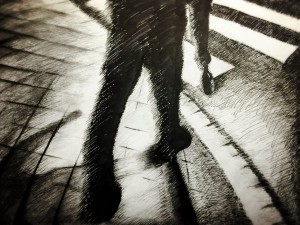 A composition showing the world of a drunkard. A general tone of black and white sets up the feelings of deterioration and abjection. The use of pen technique in depicting the drunkard walking gives a sense of sequence  as if the man in the middle is moving. The perspective of seeing the drunkard is likely to be the eye level similar with the height of him, perhaps another drunkard which makes the whole composition more interesting. It is obvious that many curvatures exists in this work-on the sidewalk, zebra stripes and even the man’s leg, to highlight the key word, “SPIN”. A spin world full of fantasy yet pathetic for the drunkards who escape the cruelness of the real world.

A kiss from the POV of love is Consumable. 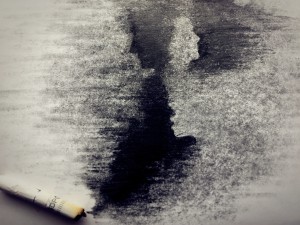 A composition mostly inspired by the Gestalt principle to create two scenes in an love affair using the Law of Figure&Ground.

This work is aim to show transience of passion and desire in love. It is as short as smoke that comes out from a cigarette. The first scene is a couple kissing with each other, which represents the start of a relationship and the second scene above the first is they face back to back which signified the end of the affair.

The whole piece was created by charcoal.

A closing mouth from the POV of a love affair is Fading. 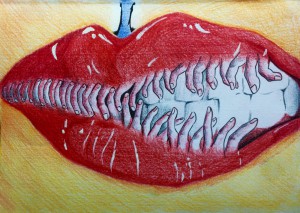 This composition is a further exploration of human love by using lips and fingers as metaphors. Crossing fingers are slowly “unzipped” and clenched teeth are revealed. Peaceful love may not means stable love. Lack of communication between couples may finally leads to accumulating misunderstanding or even hatred. Open your mouth and start sharing your true feeling before love start to fade away.

A shadow from the POV of an autistic is Company. 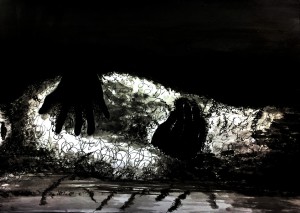 Again a pure black-and-white composition accord with the sentiment of the solution. Feeling all alone, this work is created for myself to express the scene every night before I go to bed for last one month. Black shadow, the nightmare for most people’s childhood ironically becomes my company hugging me from the back. I use scribbling to generate a vulnerable figure prone in bed, anxious and perplexed. Pure black hands are emphasized by the human figure as if they are corroding the man. This work is to show the desperation and desire for company that autistic people possess within their hearts.

An illuminated city from the POV of an ant is a Starry Night. 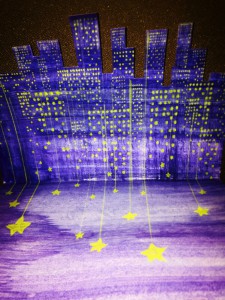 The key of this work is to bring the Signified(Illuminated city) and Signifier(Starry night) in one composition by adding one more direction to the composition. Fascination towards stars inspires me to explore what it is like in the eyes of tiny creatures like ant. Actual stars may be too small for them to see. Hence, I imagine city night scene may be their version of star.

In the process of creating the city view, Law of similarity and Law of continuity are being applied.

An unconventional thought from the POV of fashion is Lighthouse. 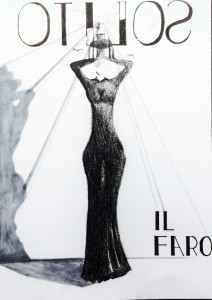 When I asked myself what fashion is related, the first thing come to my mind is fashion magazine. Hence, this work is created based on imitating the style of a fashion magazine cover with some interesting details in it. A model in a black dress holding the top pf a lighthouse which is projecting light to the surrounding. The name of the magazine is the mirror view of the word “SOLITO”, which means conventional in Italiano. “IL FARO” in Italiano means Lighthouse.

6 solutions from 6 different perspective of seeing the world broaden my mind and help me realize visual art contains more than just visual elements. Imagination can generate hundreds of ways of interpretations.