My research mainly focuses on three artists and one of their representative art pieces. Their works inspire me in a way that they give me a general sense of concept and composition of performance and installation art. This can guide me to explore and express my ideation for my project.

Ho Tzu Nyen was born in Singapore in 1976. He earned a BA in Creative Arts from Victorian College of the Arts, University of Melbourne (2001), and an MA in Southeast Asian Studies from the National University of Singapore (2007). He works primarily in film, video, and performance, and has recently developed environmental multimedia installations. He has also written extensively on art. Ho appropriates the structures of epic myths, invoking their grandeur while revealing them to be not merely stories, but discursive tools. He is particularly concerned with those moments when contemporary figures imagine and invent the past in order to serve the needs of the present. These conditions are especially salient in the context of Singapore, which was established as an independent nation in 1965. A series of occupations and settlements by regional groups constitutes the history of the strategic port archipelago prior to 19th century British colonization. A desire to redress the country’s unaccounted-for history indicates the rise in nationalism that has emerged in parallel with accelerated economic development.

The Cloud of Unknowing 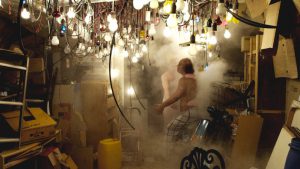 Ho Tzu Nyen’s multichannel video installation The Cloud of Unknowing(2011) explores the expansive subject of the representation of the elusive and amorphous cloud. Inspired by philosopher Hubert Damisch’s thesis on the form’s aesthetics and symbolism, A Theory of /Cloud/: Toward a History of Painting, first published in French in 1972, Ho’s work incorporates a set of eight compartmentalized vignettes, each centered on a character that stands for the cloud’s representation in historically significant Western European artworks by artists including Caravaggio, Francisco de Zurbarán, Antonio da Correggio, Giovanni Lorenzo Bernini, Andrea Mantegna, and René Magritte, as well as the Eastern landscapes of Mi Fu and Wen Zhengming. This incorporation and blending of cultural, historical, and philosophical references, both Eastern and Western, is prevalent in Ho’s practice, which references painting (EARTH, 2009), pop music (The Bohemian Rhapsody Project, 2006), literature (The King Lear Project, 2008) and philosophy (Zarathustra: A Film for Everyone and No One, 2009).

Ho’s practice speaks to the predicament of representing and interpreting contemporary art from South and Southeast Asia, and specifically from Singapore. In 1963, Singapore gained independence as part of the nation of Malaysia during the immediate postcolonial and postwar period; however in 1965, due to mutual differences, Singapore separated to become a country of its own. For this reason, and given the physical and cultural migration from South and East Asia into Malaya (the pre-independent region of Singapore and Malaysia), the sources of Singapore’s historical and art-historical narratives are entwined with that of its neighbors, and are often represented in terms of cultural and traditional assimilation and transformation. Ho’s art confronts foundational myths and historical geopolitics, and deconstructs the idea of modernization via Western influence or beneficence, by presenting viewers with a paradox. In it, Eastern and Western forms appear at once disjointed and seamless, coexisting in a fluid aesthetic interpretation that allows for the complexities of influence and adaptation to drift through each other, akin to the eponymous cloud.

Contrasted with the substantial figures of the work’s eight characters, each of which struggles against the burden of physical and material existence and the trappings of obsession and clutter, decay and disrepair, are their unexpected confrontations with the ethereal cloud. Ho’s installation is titled after a mystical treatise from the 14th century, written in the tradition of the Christian Neoplatonists, whose authorship is little-known, and which was intended as a primer for aspiring monastics on the art of contemplative prayer. In Ho’s work, the metaphorical limits of human knowledge that the medieval spiritual text anticipates as inevitable in the search for the divine are represented in the form of terrifying, surreal, or sometimes illuminative encounters with a corporeal “cloud of unknowing.” But these encounters with doubt and uncertainty, as guided by the gnostic text, are transitory, and the spiritual traveler is exhorted to keep the faith and trust that understanding will arrive. In Ho’s work, the binary division of Eastern and Western thought, belief, history, and representation, would appear to have collapsed, suggesting the possibility of new insight.

German artist Joseph Beuys first attracted attention with his groundbreaking Explaining Pictures to a Dead Hare (wherein he quite literally did that) but it was I Like America and America Likes Me that exposed him to an international audience. For his first show in the U.S., Beuys flew to Kennedy airport in New York City, where he was met by a stretcher and covered in felt, presaging his preoccupation with the material. He was then loaded into an ambulance and taken to his exhibition space at René Block Gallery. For three days, Beuys shared the space with a wild coyote, performing actions both necessary to preventing harm to himself and carrying a symbolic weight for the viewer. At the end of the three days, by which time Beuys and the coyote had essentially become friends, the artist was once again loaded onto a stretcher, taken back to the airport by ambulance, and flown back to Germany. He never set foot on the ground in America and saw nothing of the country but the gallery.

For Native Americans, the coyote had been a powerful god, with the power to move between the physical and the spiritual world. After the coming of European settlers, it was seen merely as a pest, to be exterminated. Beuys saw the debasement of the coyote as a symbol of the damage done by white men to the American continent and its native cultures. His action was an attempt to heal some of those wounds. ‘You could say that a reckoning has to be made with the coyote, and only then can this trauma be lifted’, he said. Beuys believed that performance art could evoke a spiritual response in the audience, ultimately providing a healing process. He sometimes compared his role to that of a shaman. His performances or ‘Actions’ were ritualistic, incorporating powerful symbols of birth, death, and transformation. The objects that he used were often exhibited later as works in their own right.

As a child, Beuys was fascinated by nature, obsessively cataloging all the plants and wildlife in his area. At the same time, he was enthralled by northern myths and folklore, in which creatures are endowed with mystical power. This reverence for the natural world persisted throughout his life and his art. He identified closely with certain animals, seeing them as guardian spirits: ‘The figures of the horse, the stag, the swan and the hare constantly come and go: figures which pass freely from one level of existence to another, which represent the incarnation of the soul…’ In the 1970s, Beuys became involved with environmental politics and was one of the founders of the Green Party. 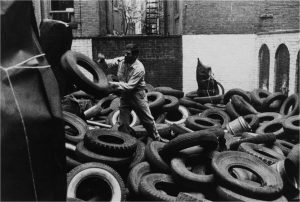 Allan Kaprow, an abstract-expressionist turned installation artist, coined the term “happenings” in the late ’50s, alongside contemporaries (and friends) John Cage and Robert Rauschenberg. His first happenings engaged the audience in overwhelming, often playful ways. Yard is perhaps the most significant of these early works, consisting of rooms full of rubber tires over which audience members jumped and forms covered in tarpaper audience members had to crawl through. For Kaprow, a former action painter, the action was as important as the paint. “Life is much more interesting than art. The line between art and life should be kept as fluid, and perhaps indistinct, as possible,” he once wrote.

Allan Kaprow was a pivotal figure in the shifting art world of the 1960s; his “happenings,” a form of spontaneous, non-linear action, revolutionized the practice of performance art. While Kaprow began as a painter, by the mid-1950s his interest turned to the theoretical, based primarily on the shifting concepts of space as subjectively experienced by the viewer. Kaprow emerged from the group of artists known as the Rutgers Group, based out of Rutgers University where Kaprow taught art history and studio art. Kaprow was among the many artists and critics who focused on an intellectual and theorized view of art, rejecting the monumental nature of Abstract Expressionist works and instead focusing on the act of their production. In particular, his influential essay, “The Legacy of Jackson Pollock,” (1956), called for an end to craftsmanship and permanence in art and instead demanded that artists shift their attention to “non-concrete,” or ephemeral, modes of production.

Kaprow’s happenings changed the definition of the art object. “Art” was no longer an object to be viewed hanging on a wall or set on a pedestal; rather, it could now be anything at all, including movement, sound, and even scent. Kaprow stated, “The everyday world is the most astonishing inspiration conceivable. A walk down 14th Street is more amazing than any masterpiece of art.”
Kaprow was very clear that his works were connected with art and not theater. He stressed that his happenings were in the same category as the action painting of Abstract Expressionists and not with scripted scenes involving actors playing parts. Kaprow’s pieces involved spaces he physically altered, with sights and sounds as deliberately composed as any canvas by Pollock or Rothko.
Kaprow rebelled against the prescriptions of Clement Greenberg, both in his art and in his writings: formal aesthetics, Kaprow believed, were no longer relevant when the art left the canvas. Kaprow’s work was based on an “aesthetic of regular experience,” a transient and momentary experience felt by the viewer being as significant as a painting on canvas.