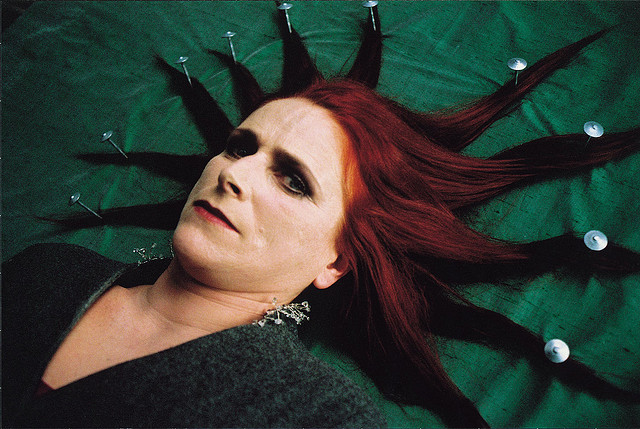 Eiko Otake and Takashi Koma Otake, generally known as Eiko & Koma, are a Japanese performance duo. Since 1972, Eiko & Koma have worked as co-artistic directors, choreographers, and performers, creating a unique theater of movement out of stillness, shape, light, sound, and time.

In post-war Japan, nature was part of the life and life was simpler without much technology. Baby boomers including Eiko and Koma protested on the streets for the damages done to the earth during the industrialization. That was where their aspirations came in.

In their dance, they often move as if they are not human. The movements are in their most pristine forms. While they are dancing on the floor, they reminds me of those earth creatures with a long, narrow body and a lot of legs. Many of their works contain nudity, which emphasizes the vulnerability of humans and transforms their appearance so they do not have everyday human bodies.

“A fish is naked and stone is naked. Why not us?”

Motion Control was produced with an Arts Council England / BBC Dance for Camera Award and examines the synergy between camera and performer. The film is notable for hyper-sound Foley score overlaid with text and electro-opera.

Take one glamorous and ageing dancer. Trap her in the real world, then smash into her private reality. Control her movement, contain her emotion. Well you can try but she has already beaten you to it. With hypersound and super smart awareness submit to this bizarre journey of entrapment.

This screen dance challenges traditional notions of choreography through depicting movements both viscerally and conceptually. And of course it is very hard to get it out of your head after watching it. The performer’s face, her hair, the soundtrack, the camera angel, the special effect, her dance in the small box trying to fight against gravity made it one of the most strangely fascinating things I have seen in a while. As I was reading through the comments on Youtube, I found one really interesting: “oh my..this is very dark, makes me feel very uncomfortable.a horrible piece of work but one that raises strong and powerful emotions. fantastic!”

Yes, the film looked really dark and horrible at the beginning, especially when the camera came out of the ground and entered this red room with a witch-like woman lying in the green bed. But the choreography/cinematography really fascinated me.