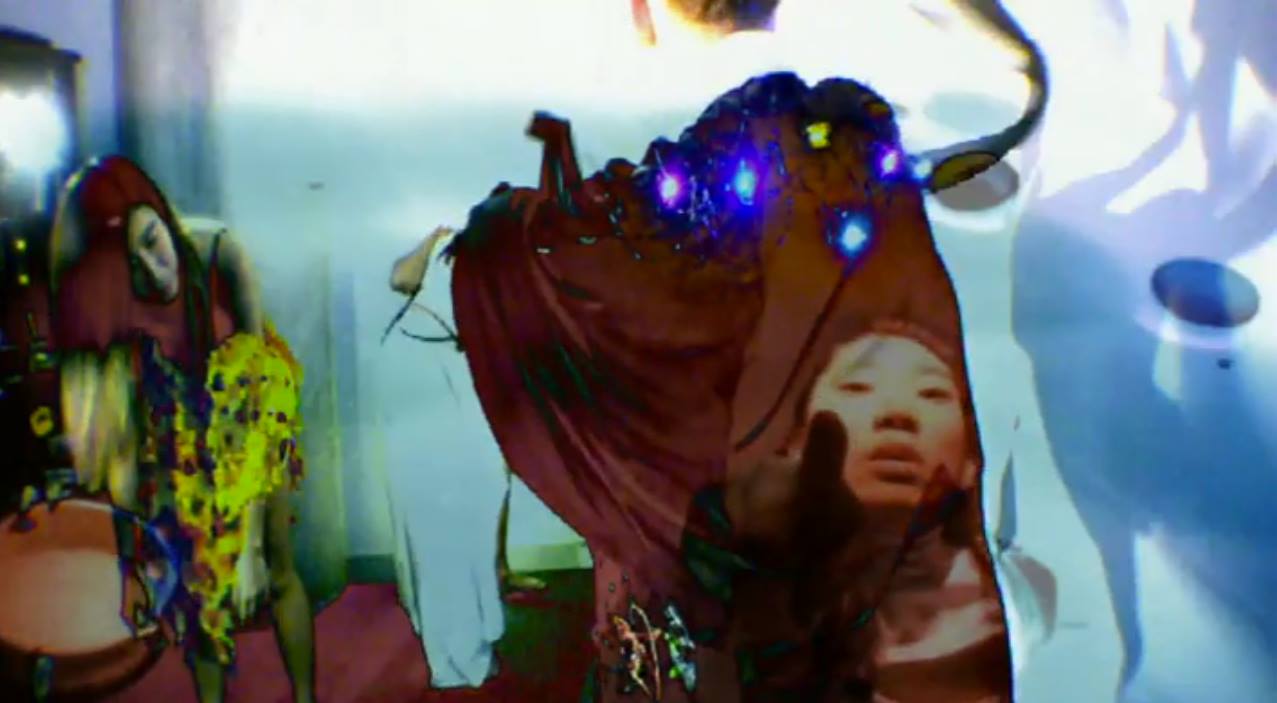 The objective of the collaborative project Touch was to investigate critical concepts and fundamental artistic concerns inherent in the emerging form of live networked performance in the third space, through creative dance movements, interactive wearables, smart textiles, audio-visual arts and the Critical Response Process (CRP).

This collaboration between School of Art, Design & Media at Nanyang Technological University in Singapore and the School of Arts, Media & Engineering at Arizona State University took place on Thursday, April 21 (SGT) in a third space where the artist Angeline Young and students of ADM performed as a collective body. And the performance was being live broadcasted over the Internet to expand the experience of the networked performance to the global audience despite of the spatial divide.

My inspiration came from this project called “The Space Between Us” which was a collaborative electronic music and modern dance piece for computationally enhanced dancers and MAX/MSP, a programming language for interactive music and multimedia. 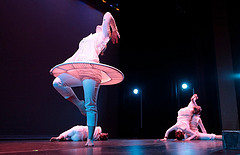 One of the dancers’ (with the round skirt) costume combined LilyPad components and an XBee (wireless transmitter) together with pressure and flex sensors connected by conductive thread, which detected and transmitted the movements of the dancer to the composer’s laptop, which were then used to generate and control sound within a MAX/MSP environment.

So instead of a dancer’s movements being a slave to the fixed constraints of a pre-composed piece of music, the wireless dance costume put the power of live musical composition in the hands (body) of the dancer, who could explore and improvise new shapes and structures within an otherwise free musical environment. This became the concept for both my costume design and dance performance.

The interactive mechanism of my costume was largely based on this idea.

While conceptualising for the idea of the final performance, we had been explicating the concept of “touch” in the third space throughout the first half of the semester by exploring such topics as “the virtual body,” “distributed presence,” “third space,” “biometrics,””sensing garments and smart textiles,””glitch aesthetics,””dance movement” and etc.

Some research critiques that helped me arrive at the final work I produced for the performance: 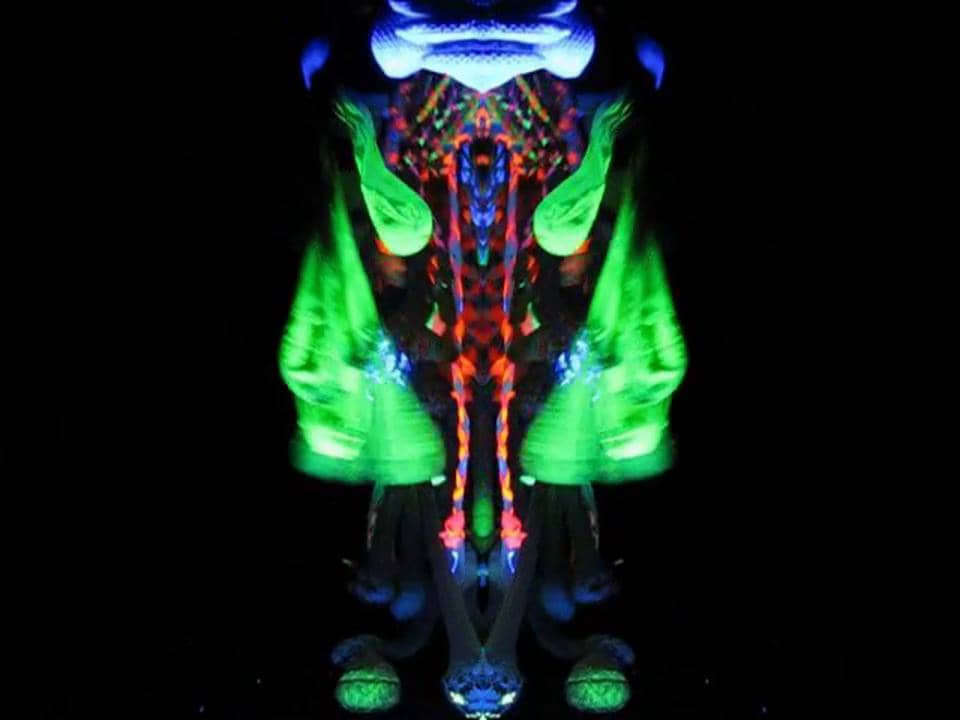 This was part of a biomimicry project called braided beaded ball suit which was an emulation of the beautiful symmetry in nature. Artists who created this were very much inspired by the glowing creatures of the deep sea as well as weird formations in the human body to inform new approaches in design. This inspired my costume design of glowing LEDs in front of the background of the black velvet as well as the mesh structure created by wires which resembled vines in the nature. 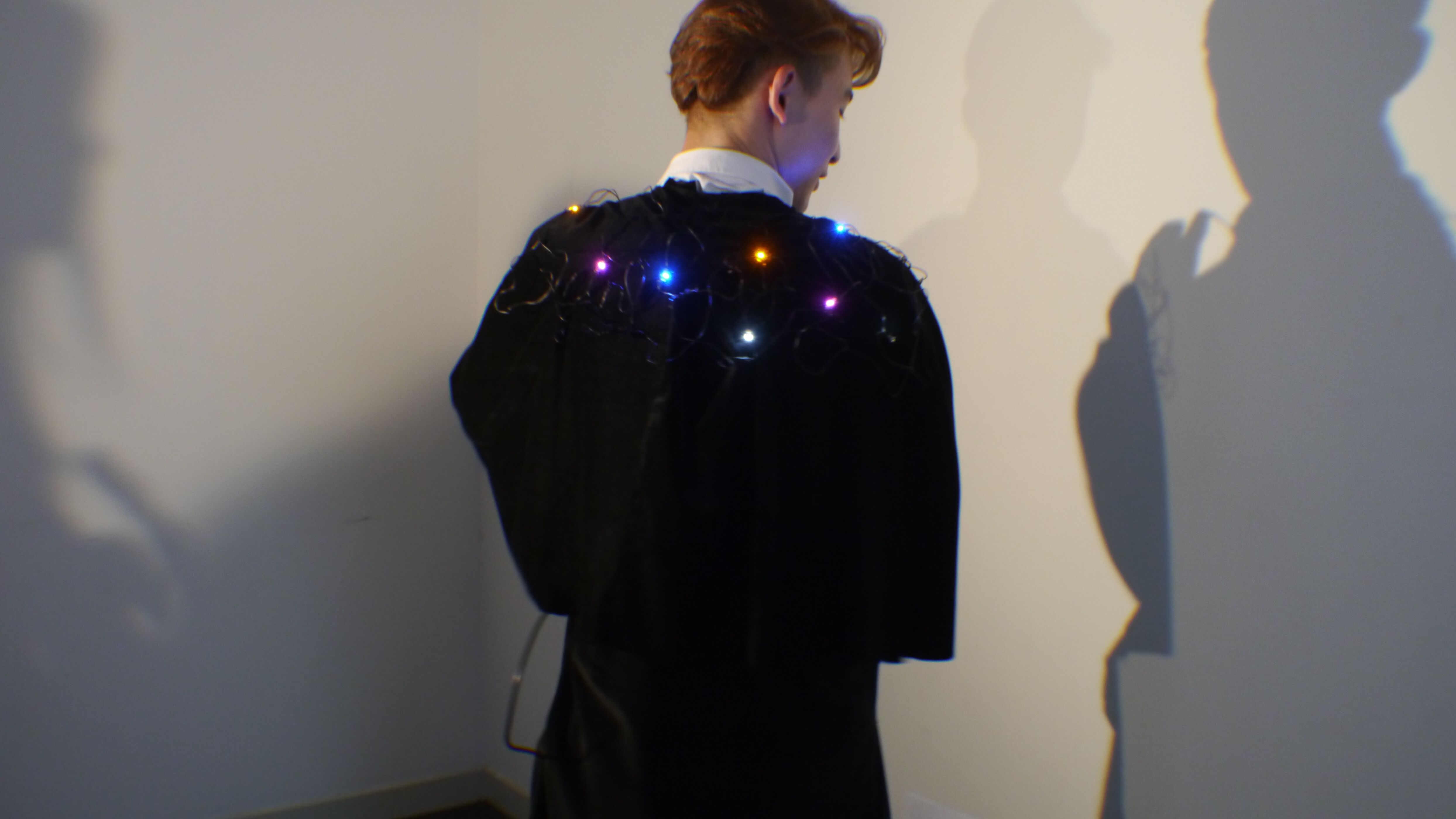 In my research critique of dance performance, Eiko & Koma’s iconoclastic work combined slow and nuanced movement vocabulary with bold theatrical design. Whether performing in a theater or in natural sites outdoors, Eiko & Koma often moved as if they were not human. Although this was not exactly what I imagined my dance movements in the final performance would look like, I did borrow the simpleness and directness from their dance.

Essentially, dance is a way of communication. Without the fixed constraints of a pre-composed piece of music the artist’s personal narrative is embodied through pure movements – dance in its most pristine form. 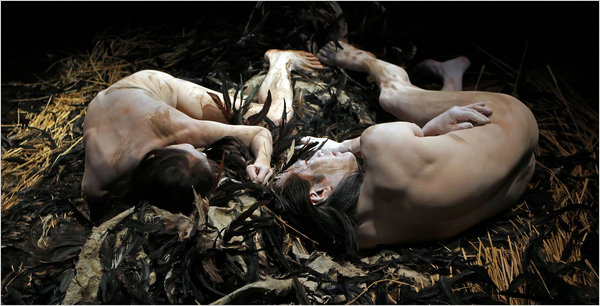 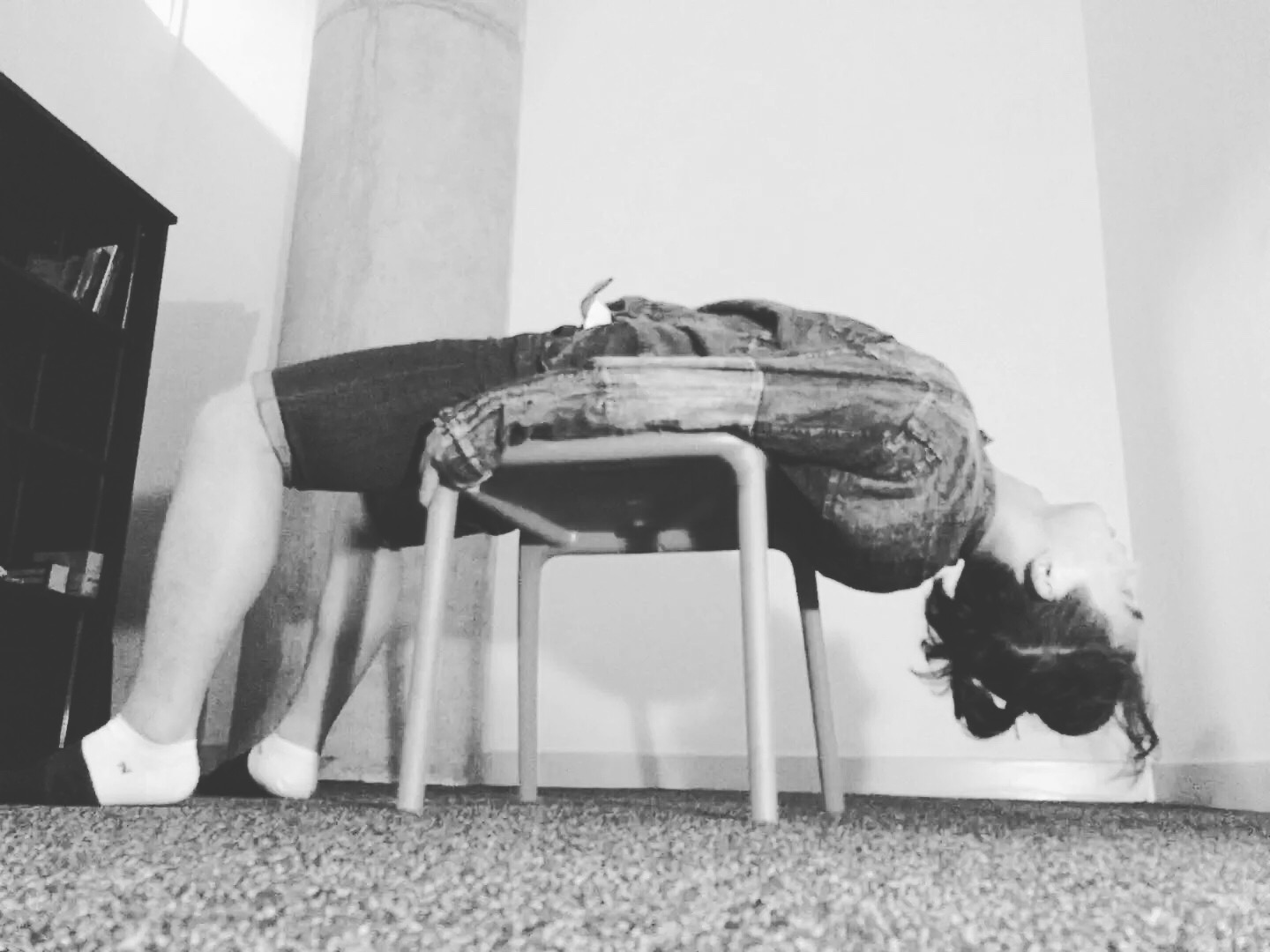 He is a weaver of personal histories through sound, a composer, who conducts and orchestrates the sonic world that is generated by the movement and actions of Angeline and the colony. He carefully layers the sound to coordinate a sense of harmonic affiliation in the third space through the carefully blending of personal histories represented in sound. However, Yuhao’s efforts are often undermined and disrupted by the actions of Charlene and Feliciana. Yuhao seeks to overcome their resistance through mysterious answers from Angeline as to the amorphous and intangible nature of human communication in the third space to create a world of mutual understanding. 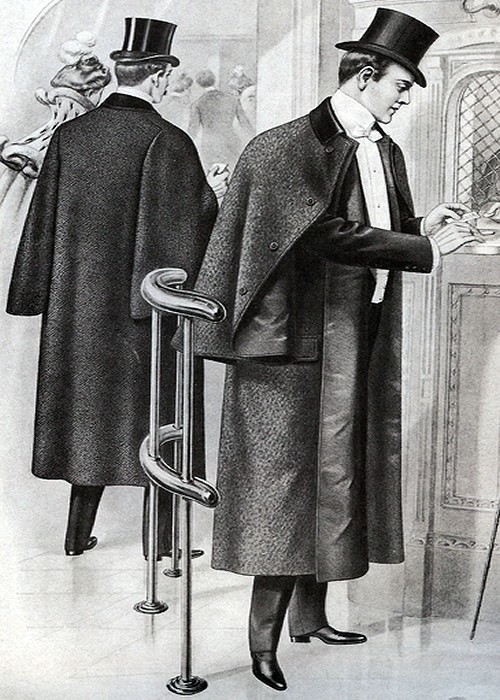 Based on this character sketch, I designed and made my costume which was inspired by the Victorian Era men’s fashion. Most often associated with Sherlock Holmes, the inverness cape is a weatherproof outer coat which was often worn in 1880s London. 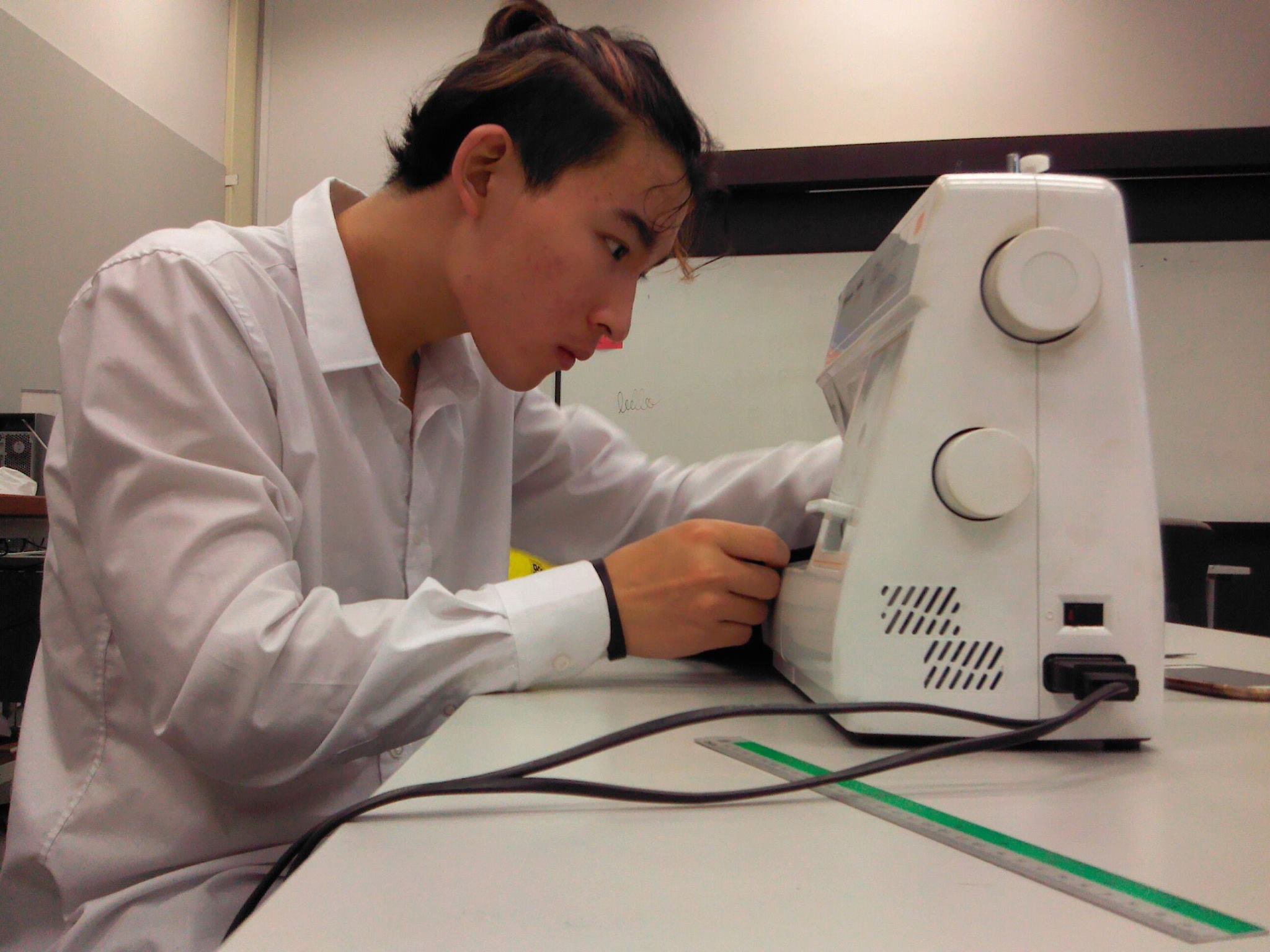 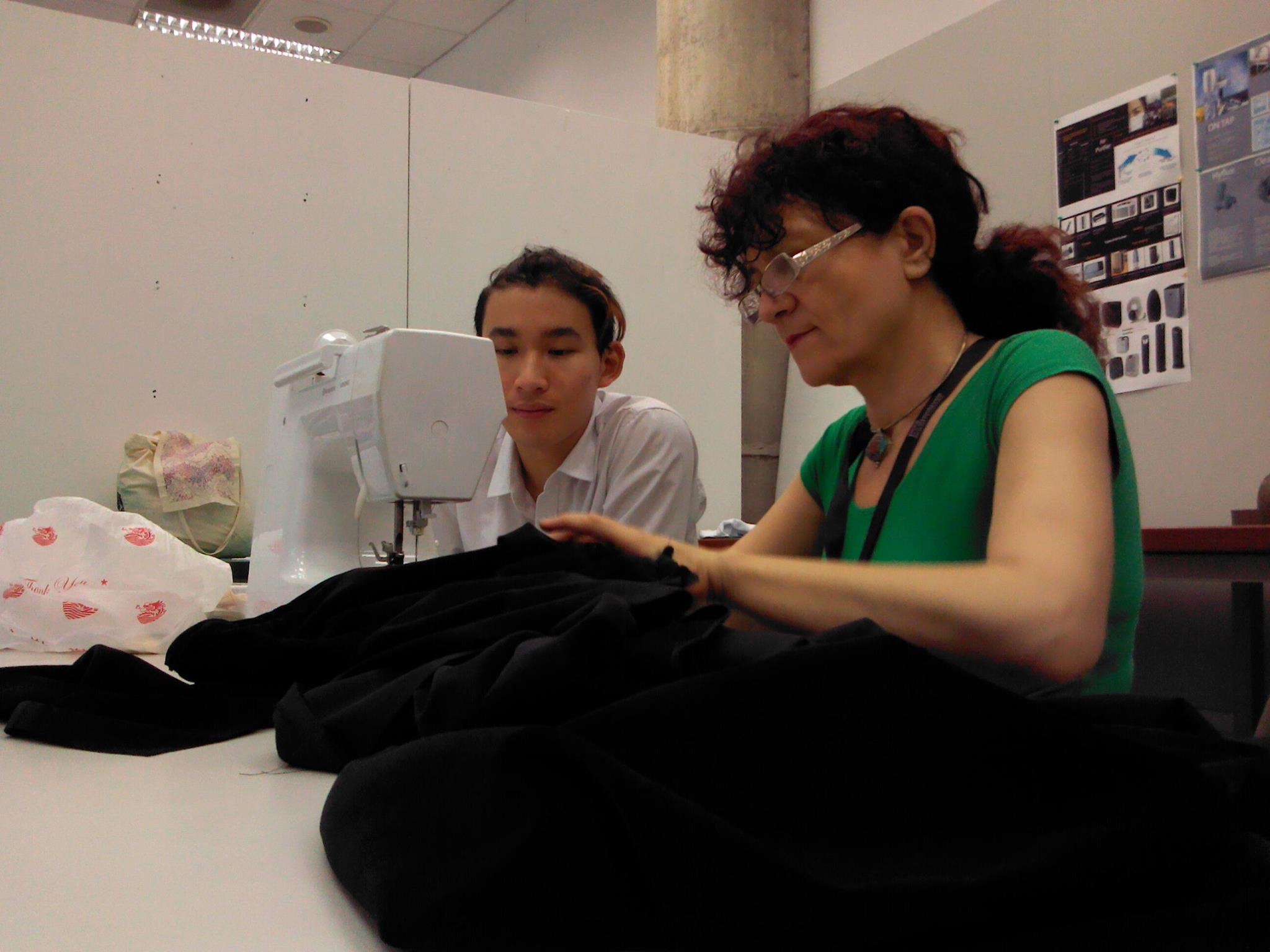 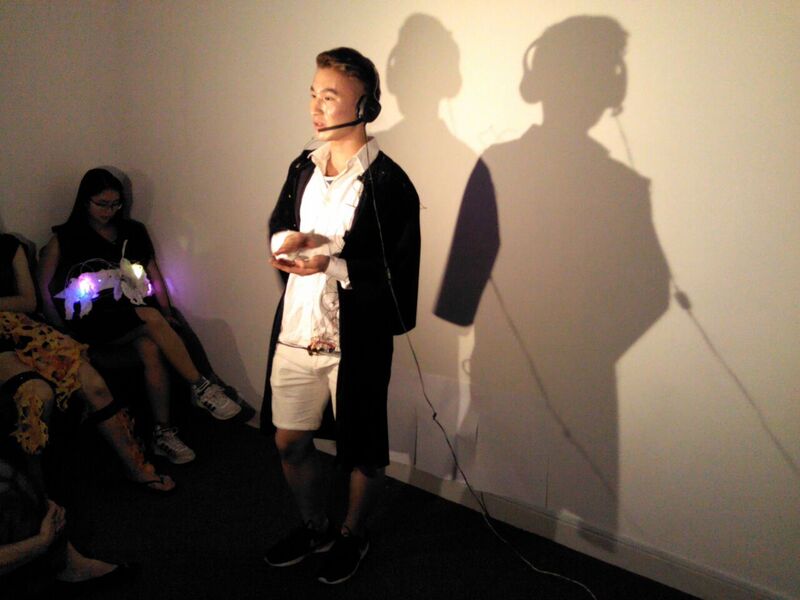 With the costume in progress, I worked on electronic / wearables for incorporation into the piece. There were many possibilities for input sensing, from accelerometers to proximity sensors, and the goal was to create the ideal mapping of input and output, embedded appropriately in the garment or accessory for the performance.

Movement and gesture would be translated into sound. Each character emitted specific kinds of sounds. I spent a big portion of the time on codings especially the radio transmission of data used to generate and control sound within a MAX/MSP environment. We switched from bluetooth wireless to radio wireless as bluetooth had some connection problem with Mac causing the data transmission to be unstable. 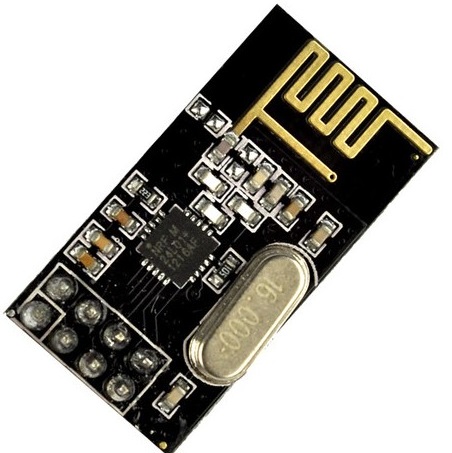 Under the guidance of Naga, I managed to transmit data between two nRF24L01 transceivers with one as the transmitter sending out the data and the other one receiving the data. The transmitter was connected to LilyPad which was sewn onto the costume. The receiver was connected to Randall’s Mac and Max software  extracted data from it to generate sound control. 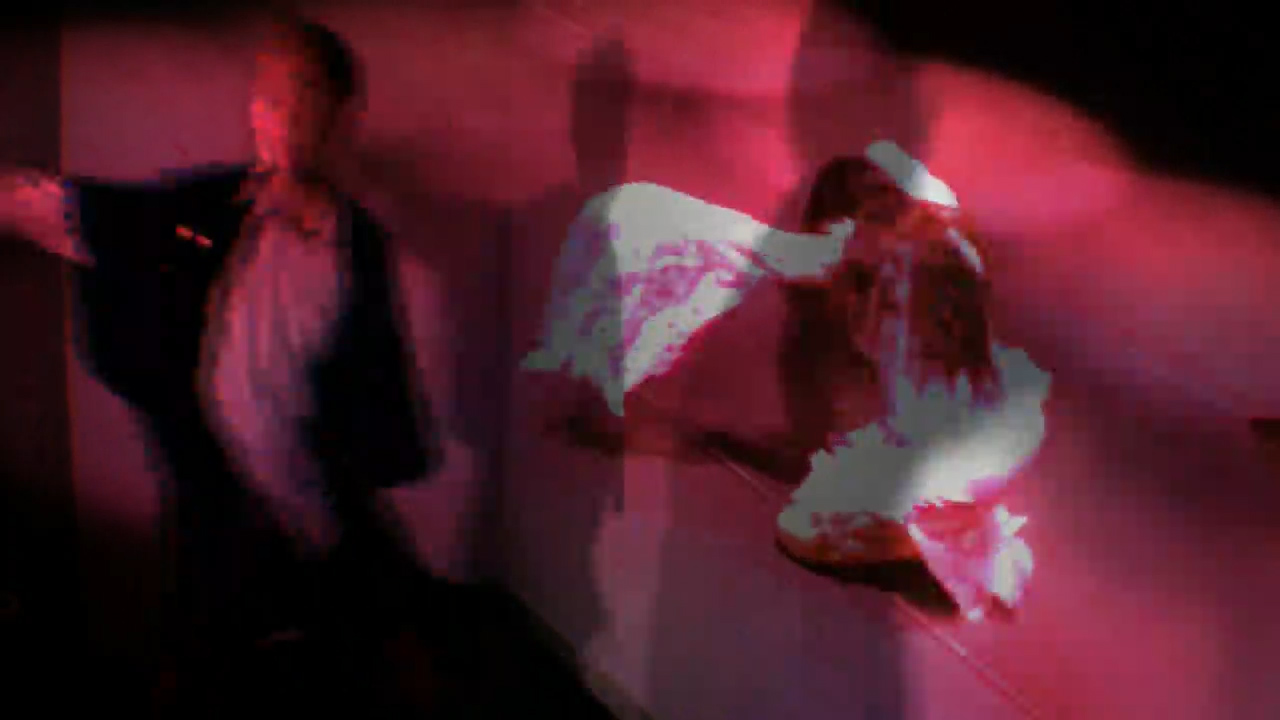 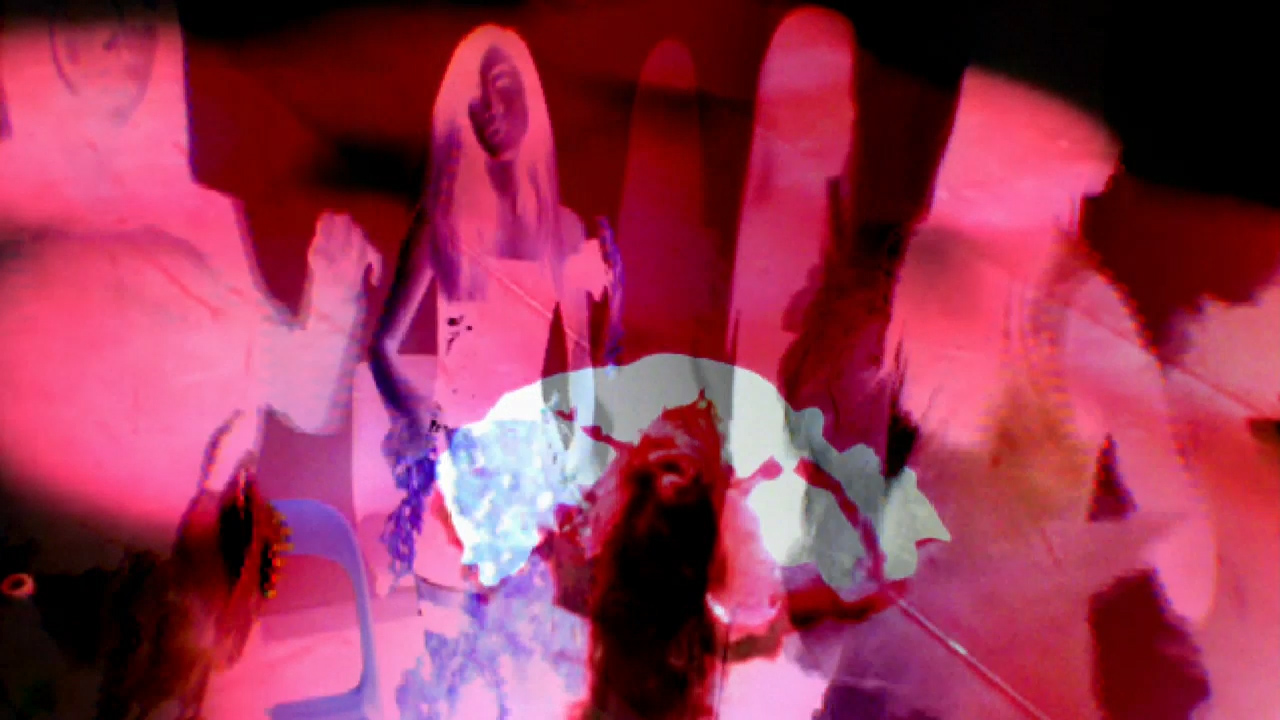 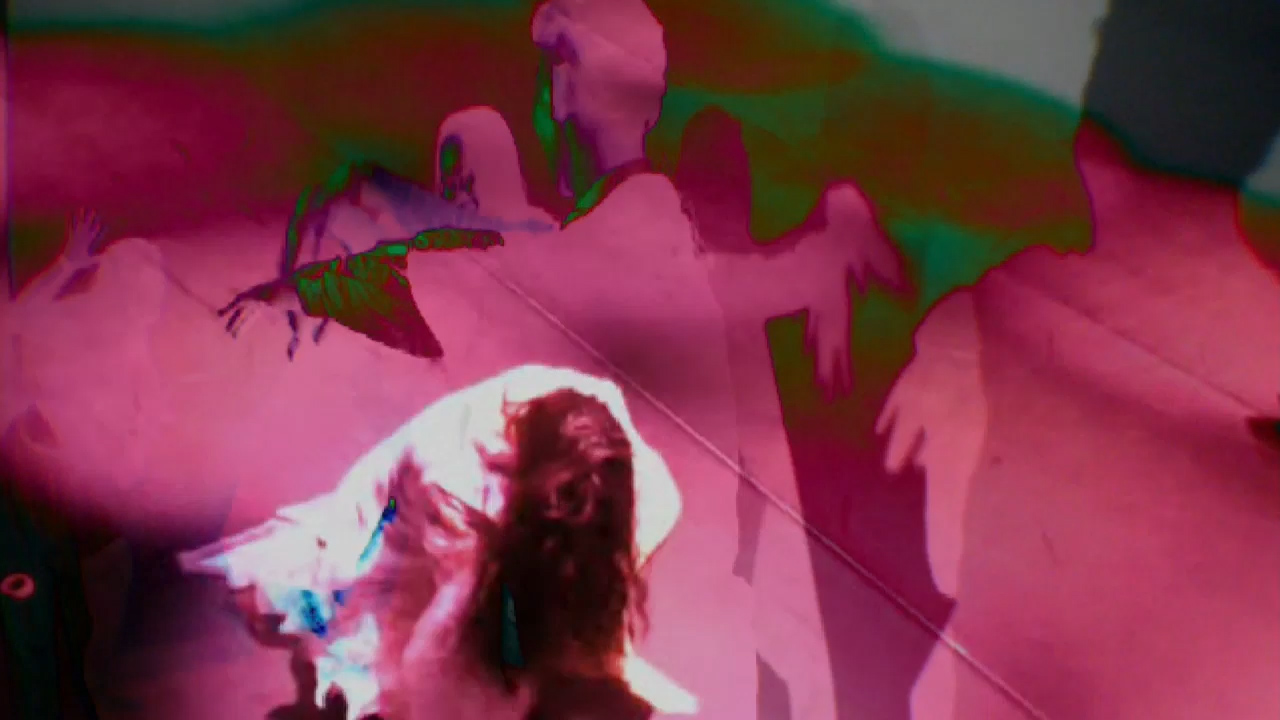 Touch is not fundamentally about technology. Nor is it an attempt to define a new genre of art practice. It is about what we have been researching and exploring over the course of the semester which is called “the virtual embrace”. It is about experience. You will only know what it means after you experience it. The questions at the start of the project: What is “touch” in the third space?  How does it feel to “touch” without physically touching? How do our digital representations in the third space connect to our corporeal bodies during the “touch”? How has the “virtual embrace” transformed the way in which we engage in social media and digital communications? Maybe only six of us have an answer for ourselves and these answers don’t have to be the same. 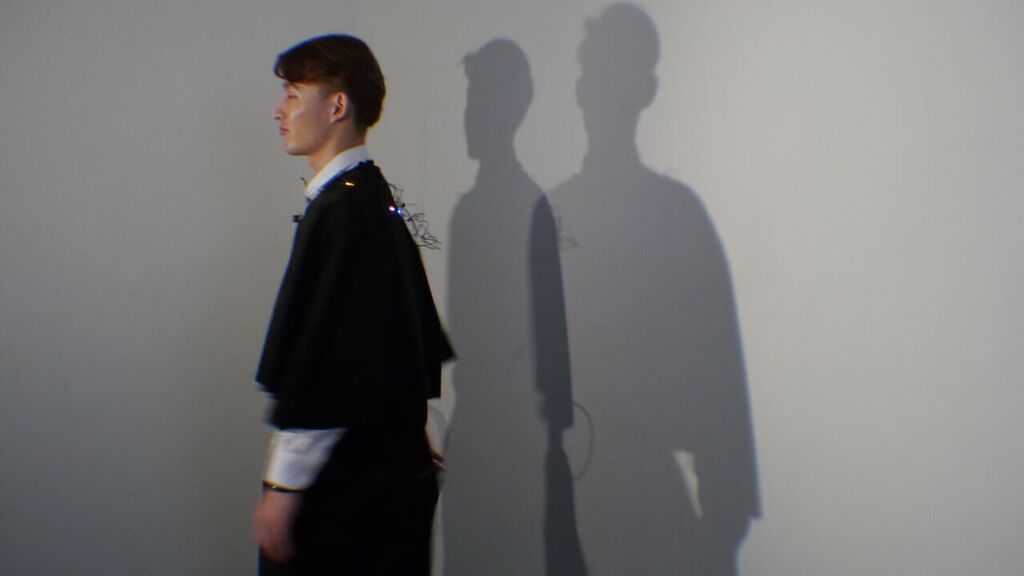