Sooo it was quite an eye opener for someone who hasn’t stepped into the museum his entire life.

This is one of the first thing that attracted me.

A travel without Visual Experience: Malaysia 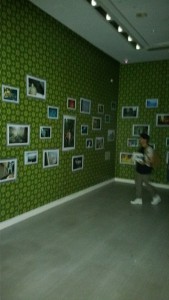 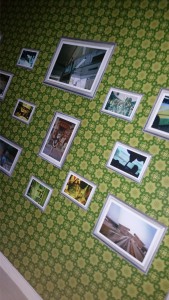 So this installation is from an artist by the name of Pak Sheung Chuen, titled A travel without Visual Experience in Malaysia.

The materials used were fairly simple and straightforward. Photographs that were documented during the artist’s journey in Malaysia and framed up. The photographs were being hanged evenly around the walls of the dark room. When we first entered the room, we were just told that we can only take random pictures inside using our camera flash as it was extremely dark in the room. This initial request sparked my interest and curiosity as to what will happen.

My preliminary read of this installation was that I might be something that a visually handicapped artist might produce, or that something that deals with light and darkness in order to convey it’s message to the viewers. Because it was extremely dark inside, we had to take random pictures using our camera flash without knowing what might happen initially. It was a truly amazing experience, and even more amazing when we were told what the project was really about.

On the secondary read, the artist actually travelled for a 5 days trip in malaysia but blindfolded. He only took pictures and these pictures of his journey are only revealed at the end. As visitors to the museum,  we were told to capture photos randomly in the dark room and only to see it when we are out. This give a close simulation of the artist’s experience during the entire journey. Very unique way of expressing himself indeed! 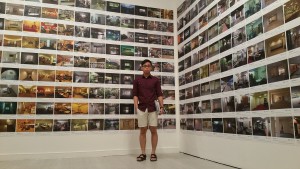 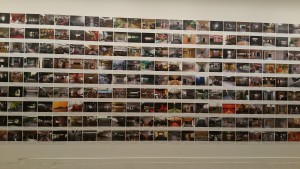 Materials used were fairly simple as well in comparison with the previously mentioned project. It was mainly photographs that he took in public, which he incorporated into the calendars month. From a far, it looks like a series of pictures of random public places, but upon closer inspection, one could make up a certain pattern in the work. For example, there were little to no humans in the photographs.

My preliminary read was that because of the calendar theme being used, it could be something to do with the idea of time and development. It could also be a theme revolving around changes that will happen within the next few decades. It was a really cool idea and I was able to spot a few familiar places in the series of photographs too, which also gave me a sense of homely feel.

On the secondary read, the calendar that the artist chose to use was to represent an abstract unit of time, and that while we humans we busy with our everyday life and cannot actually sense the passing of time, but we are able to see how days and months pass by. The artist used simple one point photography with little to no explanation at all. There were no captions nor interpretation. The viewer are given this experience of ambiguity as they journey themselves through the series of photos on the walls as calendars.

In conclusion, this trip opened my eye as to the kind of work being produced by local and overseas artist alike. It was interesting seeing how different people express themselves through unique and interactive ways that I never thought was possible. There are lots of other interesting stuff too but I would say these two are my favourite because of the interactivity and experience they have given me!

Thank you and have a nice day!

← Hello! Activity and Typography Research
Work in progress and development for project 1 ! →