Hello my dearest Handsome and pretty classmates and tutor. Hopefully all of you had en enjoyable Chinese New year gaining weight. This is the research and also the first part to the upcoming project two!

To start off the project I have been brainstorming for some ideas about Singapore as a home in general. Singapore, or Jurong in particular is my homeland and I have been living in Jurong since the day I came to this world. In my previous project I had various definitions of the term home and how it affects my life and routines on a daily basis.

I chose to complete approach number 2:
– Visit a place or an area in Singapore that you are less familiar with, have not been for quite a while or have never been before. Go on a wander, what did you see, smell or hear?

First of all I would like to say, this project has given me a chance to explore a part of Jurong that I never bothered with. In fact this location is only a 15minutes walk away from my residency and yet I never took the initiative to even look at it. Sometimes we take things around us for granted because we see it everyday. Since I have not been there before I decided to use this location as my project idea and research. And Im SO THANKFUL I did because I had a wonderful afternoon exploring the area. It was an EYE OPENER for me.

The location I decided upon was the Chinese Garden. 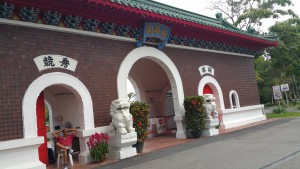 This is the main entrance of Chinese garden. I made the mistake of visiting it in the noon which was the hottest period of the day. But nonetheless I was prepared. I was in my singlet and PT shorts. Armed with my notebook, phone, and towel I was ready to embark on this adventure. 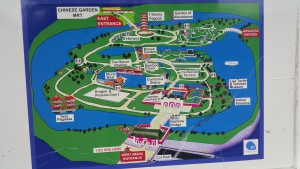 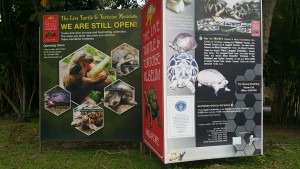 At the entrance there is even a simple map to guide the visitors. Admission is free all day. There is also a turtle and tortoise museum inside chinese garden itself.

Chinese garden can then be branched out into mini gardens mainly the Bonsai Garden and Japanese Garden.

I shall now bring you through my journey in chronological order. 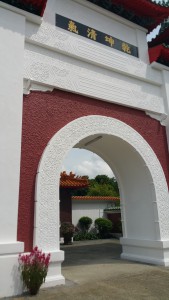 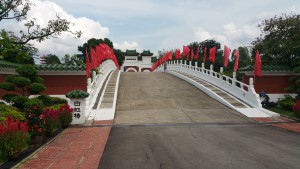 In fact walking over this bridge makes me feel like Im some General bringing my army for a war and Im leaving the palace and going out of the city. The amount of psychological impact this place have is too high. 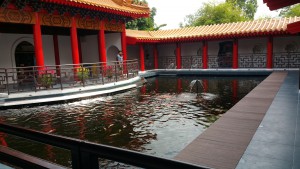 The architecture and design were built to replicate the ancient palaces where Emperor used to live. I could see a lot of potential filming opportunities with locations like these for my upcoming film projects if they were related to ancient history or something along that line. Very cool!

Then there is the Live turtle and Tortoise Museum which I didn’t entered because there is an entrance fee for this… Haven’t collected enough Red packet so I had to give it a miss. Nonetheless it is still cool. Exterior were painted with turtles and the design of the building is again very ancient and chinese style.  This could be a place to research or film if Im doing a video on turtles! 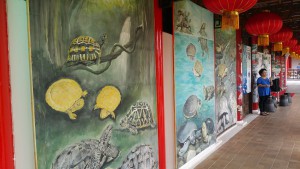 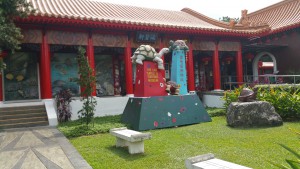 This is one of my favourite views. You can see the Pagoda Tower in the background. And the lake is so calming and soothing. 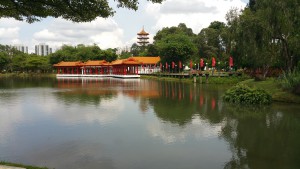 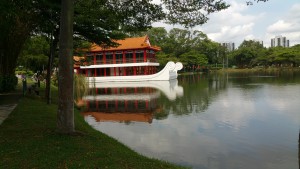 A walk through this passageway makes me feel like a princess from the ancient dynasty, with my maid and enunch walking alongside me. LOL 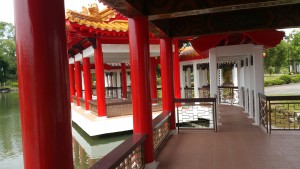 And finally, when Confucius says…. 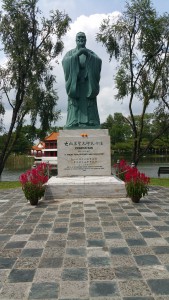 The first sub-garden of the chinese Garden was the Bonsai garden. As the name stated, there is a large number of Bonsai Plants inside, all arranged and nicely taken care of. There are also informative panels where one could read up about the Bonsai plants and its historical meanings to the Ancient chinese.

This is the entrance of the Bonsai Garden, guarded by two nicely crafted stone lions. 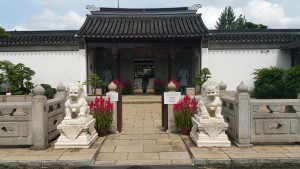 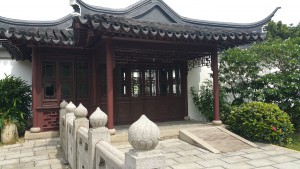 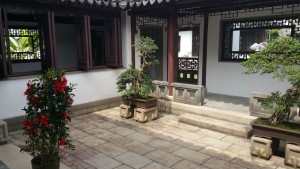 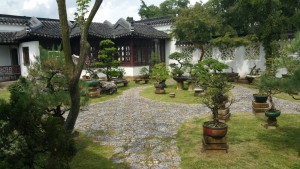 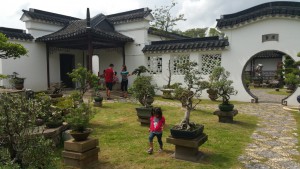 Really cute kid in the photo. Probably daydreaming about being a Huan Zhu Ge Ge. 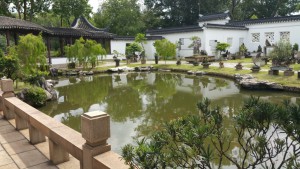 In fact I love the Bonsai Garden more then the Chinese garden itself because it looks exceptionally awesome with the well groomed Bonsai. It looks like the Royal Palace’s garden where the Emperor would take slow strolls, wondering about life outside of the palace is because he has no life as he has never stepped out of the palace before. Sometimes Emperors can be such wimps.

This is the Pagoda Tower. I used to remember the pagoda tower was used by deities to subdue demons. Or was it from a TV show?

The pagoda tower is really huge (you can compare it with the human). Yes its possible to climb all the way up to the highest floor. The view is magnificent as Chinese garden is location just beside Jurong lake. But no, I didn’t climbed all the way up because those Pineapple Tarts I had during Chinese new year was weighing me down. 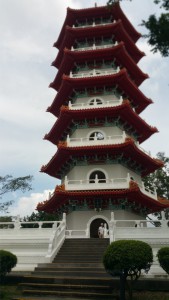 This is my least favourite part of the trip because it was not as excited as the Chinese garden and Bonsai Garden. However there are still various knowledge that could be gained there. I learnt about the cultures and also how the Large stone lanterns came about the meanings and history behind it. 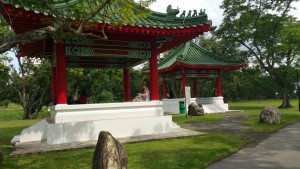 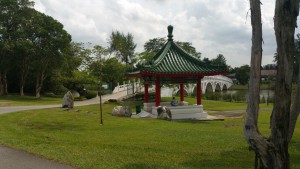 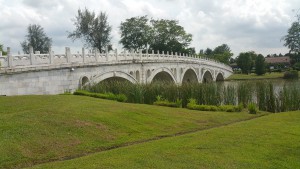 The view from the center of the bridge was breathtaking. Very calming and relaxing. Ruined only by Singapore’s weather. 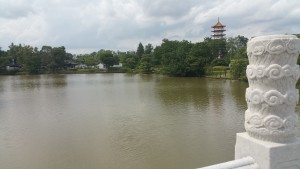 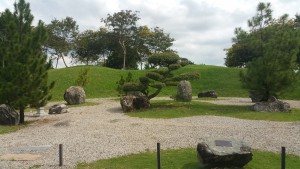 This scene in particular gives me a very Japanese Village-y feel. 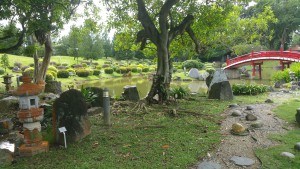 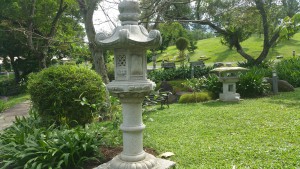 The trip was amazing although I could estimate how much water I lost from perspiration.

so, What have I learned?

I learned that although we might feel that singapore is a small country, there are still many places that we have not been to or in some  cases, not even heard of. These places are definitely potential story ideas and as content creator/creative people, we should once in awhile step out of our comfort zone to visit and explore these places. This trip gave me countless inspirations as well and I could see the huge amount of potential a film student could exploit from this place.

What I want to share and how I feel towards the place?

I urge everyone, if not those staying around the west to visit this place. It is definitely unique and in this modern day where skyscrapers and high-rise buildings covered most of Singapore’s land, such an architecturally unique place is rare.

There is a slight sense of fantasy when you first entered the place. When I was there, there were even cosplayers dressing up and taking photos. I did not take their photos because their cosplaying standard was…..nevermind.

The main point is that this place could give you a breather from your everyday studies or work stress. A good place to relax too provided you don’t visit it on a hot sunny day like I did.

What interests did the place triggered me to find out more?

As someone who detest art history, I find that a trip like that actually made me curious and kind of compelled me into learning more about the ancient chinese and Japanese history. The place evoke a sense of emotions into us because most if not all of us have seen places like these in films or TV drama, but being able to be there is another story all together. Now Im more interested to not only know more about the history of ancient chinese and Japan, but also the history of the place itself. Why was Chinese garden built? Whose idea was it? What purpose did the creator wants to achieve when proposing an idea like this to the government? Definitely I was intrigued.

What I see, hear and smell?

The moment you enter the garden you could hear everything from bird’s chirping, sounds of insects, all the way to the slow and calm flowing water in the river. There were also visitors and tourist, and sounds of excited children running about especially in the Bonsai Garden. There were gardeners and caretakers maintaining the lakes, cutting the grass, and sounds of water as they sprayed the hose to give the thirsty plant their daily drink. You could see greeneries and beautifully replicated buildings from the ancient dynasty period and smell fresh air.

It was such a 4D experience because all your senses heighten automatically upon entry. Most importantly, I feel like if I get the chance to I would want to make a documentary about the place to promote it and to educate more singaporeans about this place and the amazing line of history behind it.

Thank you very much and end of report. Have a nice day everyone!

Oh and, this dude just reminds me of the previous Art history lesson where we explored the chinese tomb.

Maybe one of the soldiers escaped? 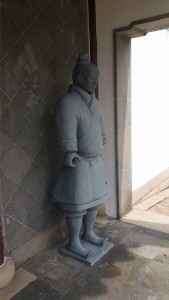