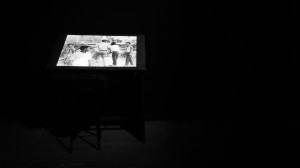 I was drawn from the passageway towards the dimly lit table that had images projected upon it. The initial thought was that this may be an installation that is related to education/ educational institutions, perhaps a look into past educational systems. However, upon closer inspection of the images, it dawned upon me that they are not merely just projected images, but that from protests that was the result of political unrest in the Philippines. The work has brought much interest to me and I feel that the artist is conveying a deep message through the means of irony – censoring the slogan cards that the protestors are carrying as a reference to governments (especially that of the Philippines in this instance) constantly enforcing forms of censorship upon its citizen. The table and stool were part of the installation as a way of acknowledging the youths who were students but yet were exercising their political rights. 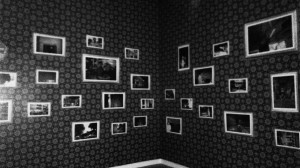 A Travel Without Visual Experience: Malaysia

I do not initially understand what the exhibition was, while some of me thought that it was perhaps a social experience to allow people to experience how is it like to be blind. However, after being advised to turn on my flash to make my way around inside – that was when I realised that this project was done by an artist who believes in using all the other senses to experience the space and his environment, of which he explored places without his eyes. The act of using flash photography renders one not just a mere observer of the exhibition, but a participant too. By inhibiting the sense of sight, one starts to pay more attention to his/her environment and be more sensitive to his/her surroundings.

One thought on “a trip”